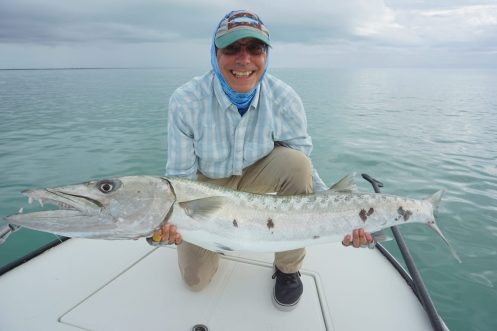 We’ve had another week pass here as we settle into the fall season. This last week was eventful for us in the way of weather. We started the week out picking up the leftover pieces of tropical storm Gamma.  There was also another development showing promising growth to hurricane levels set to split between the northeast Yucatan coast and western Cuba. I was confident we would only see rain and some wind out of the system. Unfortunately, The National Hurricane center updated projections for the storm to start heading more inland into the Yucatan and was dubbed as major hurricane and named Delta. 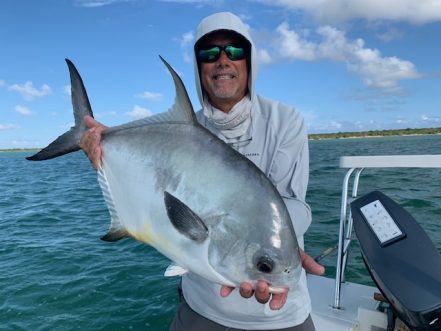 ESB Lodge began monitoring the development of Delta hourly, through local, national, and world weather platforms. I made the call Tuesday morning to fish the morning and have guests return 12:00 PM to see what continued development showed. By the time guests returned midday Delta was projected to be the strongest hurricane to make landfall on Mexican soil in 15 years and storm tracking continued to show movement closer to Playa del Carmen. Category 4 was predicted for hurricane strength. While this storm was still a ways north of us, various spaghetti models showed chances of this storm coming close to Espiritu Santo and Ascension Bay. State government agencies declared mandatory evacuation of all coastal towns in the region. Chiara and I opted to evacuate guests to Mahahual where everyone spent the night at a nice hotel out of harm’s way. Staff, guides, and I stayed at the lodge and executed well-rehearsed hurricane protocols. Storm barriers, window blocks, and the entire lodge underwent a transformation to be prepared for the worst. The guides and I situated our boats and also aided locals in the town, locking everything down. It was a sleepless night for much of us as we continued to watch and set up for an anticipated landfall roughly around 4:00 AM. I remember standing on my deck at 2:00 AM and witnessed one of the most eerie weather transformations I have seen here.  Things became still, so quiet, with all the normal jungle noises paused. My dogs began to whine and chose safety under my bed as this ominous presence was felt. It’s the first time I have never heard waves softly crashing on the beach. My crew and I had previously prepared a couple vehicles ready for immediate evacuation for our personal safety. It was interesting because the silence had awakened the rest of our crew and I said to be ready to move quickly. We watched the weather for another hour and conditions became windy, with some heavy rain. This was short lived and by daybreak we saw broken weather with a rising sun. We watched live cams as the hurricane made landfall further north than originally projected. It was clear the storm had lost significant strength and still did cause damage around Cancun and Playa del Carmen. It was baffling to see something so intense lose its power quickly as it hit land. Weather forecasters and meteorologists could not figure out or justify why Delta lost its momentum and all conditions were set to fuel this predicted catastrophe. 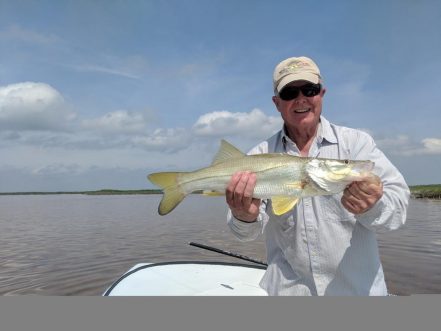 To say we were relieved was an understatement. Staff, guides and myself ran to put everything back together and resume a normal week. Chiara brought guests back to the lodge and we settled for a late lunch followed by a normal evening. Wednesday morning, we proceeded with our typical  fishing day and were able to get guests back on the water and finish out 4 days of fishing. 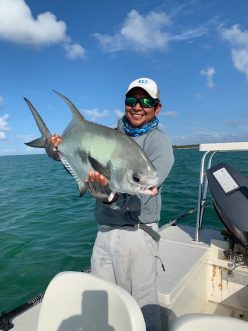 FISHING:
Historically we have seen fishing become tough around storms. Fresh water, extremely high tides, muddy shorelines, varying pressures, and windy conditions all can shut out a productive week of fishing.  I was impressed at the resilience our fishery showed and despite not having perfect weather we were able to manage some fantastic fishing. The bay was far from ideal but nothing we have not seen before. We had a drawn-out tide that was lower than normal which gave way to some decent tarpon and snook fishing.  Bonefish were readily available when pursued. Our river systems held all manner of species with the backcountry losing water to falling tides. A couple days guests that chased permit were able to see a few flats with numbers fluctuating between schools, singles, and small groups of 2-6 fish. Guest Ivar Bolander joined us for his first week at ESB Lodge and succeeded in landing two beautiful permit. Ivar is an accomplished saltwater angler from Florida, and we were encouraged by his success. Guest Anne Spavin and her husband Jim shared a boat catching all manner of fish including a big tarpon with guide Pepe. Anne was happy to pull her first permit from one our river systems. Guest David Isaac worked hard to catch permit and was able to get a couple fish that ate his fly as well as hooking a nice fish that became unbuttoned after a few minutes. He also landed some smaller tarpon and was able to redeem himself at ESB Lodge after explaining his last outing with juvenile tarpon that seemed to always throw the hook. Guide Fernando and David landed one of the largest Barracudas we have seen boat side, and easily the largest that Fernando has had a guest land in 15 years. Angler of the week goes to first time guest Rodney Neil. Rodney landed his first permit and proceeded to complete a super slam with guide Fernando. Later in the week he landed another permit along with another super slam with guide Alex.  Rodney is a very humble and mild-mannered fisherman and very well versed in the outdoors. It was fun to share this experience with him and we look forward to seeing him next May! Our group of 5 anglers landed 5 permit total for the shortened week.  This brings our permit totals for the season to 207 permit with 78 guests. The other day I was looking at permit totals for our 4 seasons of operating and we have landed over 1,000 permit at this point. This is an incredible feat for guests, guides, and speaks volumes about the wonderful fishery we have. 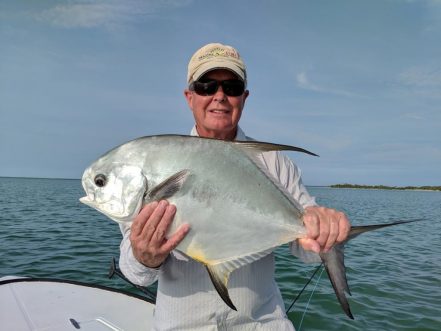 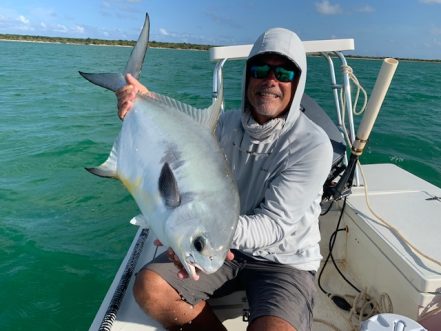 WEATHER/TIDES:
Weather for the week was stormy conditions the first couple days and began to clear up with partly sunny skies and medium winds from the northeast. Tides were high in the AM beginning of the week and became very lower after Delta passed.

Chef Carlos and our house staff did an amazing job working through difficult scenarios and stayed consistent with our normal cuisine which is rated top notch by guests. I also must take a moment and say that I extremely proud to have this crew and guides working alongside us. They are the heart and soul of the operation. We worked long hours, had little sleep, and had an unbelievable turnaround after Delta skirted us.

We’re going to put storms behind us for the time being. NOAA sites indicate a quiet week with tropical disturbances and we have some decent weather in the forecast. We have returning friend Lorenzo, (from Pacific Grove) joining us again for his second trip in 4 weeks. Lorenzo has become another guest who has made ESB Lodge his home and I love watching my crew light up in anticipation of his return. It’s really a highlight sharing a cocktail in the Palapa reminiscing and sharing conversation with Lorenzo. He is embedded into ESB Lodge culture and family.

I hope everyone has a great week and able to get out and enjoy some fall weather. Do yourself a favor and give our friends at The Fly Shop a call to inquire about this wonderful place. Be safe and stay tuned for next week’s report. 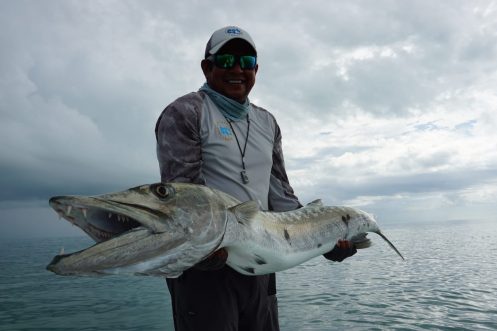