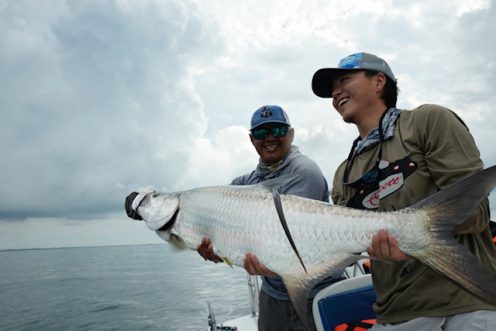 What a week we had here at ESB lODGE.  I don’t think you could pack more fun, entertainment, and borderline debauchery in six days of fishing.  We covered the gamut of all things important, solved many world problems in the wee hours, and were taken on a cultural tour from our friends that hail from the far east.  It’s these circles and friendships that carve out an identity we so dearly hang onto and cherish.  It’s fueled by a love for something tugging on the end of your line and properly lubricated with just the right amount of tequila.  A friend of mine from Traverse City, Dodd Russell joined us for his second ESB trip.  Hometown heartstrings are pulled, and I love the unspoken connection between us.  Jim Bartschi easily the best rod designer on the planet was with us along with his better half Theresa.  Following the new launch of yet another incredible Scott Fly Rod invention the new Wave series was thrown, and nothing but awe and admiration for the price point salt sticks.  A long flight from Tokyo gave us Masa and Yuji Katsumata.  New to ESB but deeply rooted in the industry it was an absolute pleasure having those two join us.  Masa, aka “Fluorocarbon King” is a master of his craft and forever a student of the natural world and fishing.  His son Yuji is a remarkable young man who is on a fast track of ingraining himself into the future of fly fishing.  Our dear friend Jon Wheat, a sweet gentleman who fishes with us two weeks a year was placed in the week of heavy hitting industry leaders.  Jon keeps us tranquil and reserved while having a lifetime of experiences in the outdoors many of us will never see. 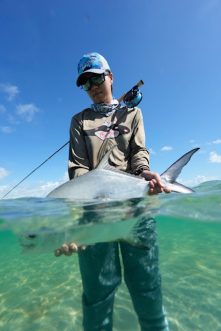 FISHING:
A delicious recipe for a highly anticipated week comes to the final moments where we lay at the mercy of mother nature.  Go figure, the weather was awful.  Hard east winds, extremely high tides, low visibility, and storms is not what I ordered for my friends.  Friends being friends understand the stakes and you use the hand dealt to optimize the outcome.  I felt pressured even though I know there’s nothing I can do in that regard.  Your own personal week that translates to a downpour at the annual picnic.  Despite my negativity we had moments that shined and still glimpsed what this special place has to offer. 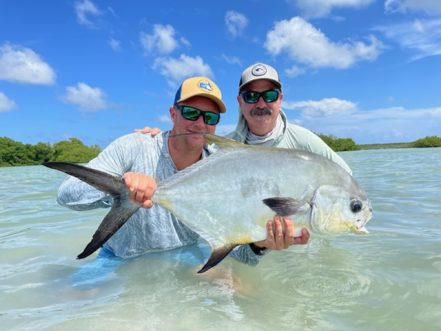 Permit for the most part hunkered in deep water seeking cover and most fish found were on the southside. It’s a hard read for the guide and I salute their dedication searching.  Red lagoon, the boca, and casitas to red buoy held fish and there were some schools mixed in but hard to track in the light.  High tides with bad light put us at times closer to the shoreline searching for nervous water.  Jon Wheat appropriately picked off the first permit for the week last Monday with Alex.  The next couple days were tough and partial dedication was given to permit fishing.  We had a couple painful break offs that succumbed to coral and rock.  Thursday gave way to better conditions for permit and Dodd was able to wish himself happy birthday with the second permit for the week along with guia Jesus.  Yuji had yet to land a permit and had high hopes of catching one this week.  He tagged his first two permit ever with guide Alex.  Most of the readers know Alex and after 8 years of fishing with him he still amazes me what he comes up with.  That night there was a celebration of cake and drinks.  I slipped out Saturday and was able to avoid all responsibilities as a lodge owner and tag along with Dodd.  Saturday was the best weather day and we started seeing a lot more permit on the southside and a number of schools showed up on the flats.  Everyone started out close to the point of red lagoon and poled south.  Three fish headed straight at me ten minutes into the day and a perfect cast translated to an obvious refusal.  Pepe and Victor headed north, Alex moved Dodd and I further west, and Jesus camped out in the same place with Jon.  Jesus in one of the most instinctual guides I have ever met on the water.  Remind me one day and I’ll share with you a story about Jesus tailing a floating permit in open water.  Sure, enough Jon and Jesus saw a solid 100 or so permit coming through in singles, doubles, and small schools for the next few hours.  Finding permit is one thing, getting them to eat is another.  Meanwhile Dodd and I stalking the inside of red buoy and we had some shots that were also refused.  I asked Alex about “flamingo” a small lagoon tucked on the southside that is fed by an entrance less than the width of our skiff.  My thoughts were tarpon that cruise those flats and figured it was worth a shot.  A hundred-yard walk pushing the skiff put us immediately into bonefish and we happily landed a few fish.  A permit showed in front of Dodd and there was the six-rod shuffle, pandemonium, and yet another refusal.  A cuda was there that tore a needle fish fly to pieces and added to the chaos.  We saw on that south shoreline some tarpon but not many, and had one eat, and got refused.  A few tailing permit showed in very skinny water that we could see easily 300 feet away.  Dodd placed the fly after a few attempts in the zone and we watched a permit accelerate to another refusal.  I’m ripping through my permit box at this point and a little cranky.  My turn on the bow gave me the chance to cast to a permit that disappeared with passing clouds.  Alex and I were focused on that fish and Dodd was watching right and announced he saw two big tails 100 feet off.  I had a small tan flexo crab on and it was lights, camera, action.  Small window of light, sandy bottom, foot and half deep, so-so cast and we were off to a gorgeous permit peeling backing.  It was so visual, so beautiful and classic.  While I was fighting the permit we moved into deeper water and lots of permit showed up.  They were all around us and we saw two schools 200 feet off milling around.  Alex hopped out of the boat and after his traditional war dance with the permit tailed it, nothing short of perfection.  Dodd was pumped as well me and we quickly charged back after photos to chase the spotted schools.  It took 5 minutes and we were in them.  It was a school of smaller permit and a spawning shrimp I tie resulted in Dodd landing three fish.  This guy’s enthusiasm/excitement was off the charts, and we concluded a very special day for both of us. 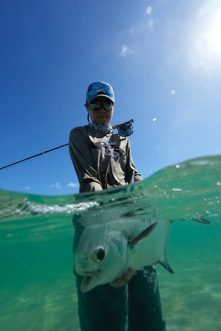 I suspect we will start seeing more fish show with the nice forecast the next few days and I’m positive there’s a boat in flamingo lagoon right now with this week’s new guests.

Midweek we had a fun time in deeper water after hard rain with rolling tarpon.  They’re loaded in the cut now and they showed up and were rolling around the boats.  Jon leadered a 70 pounder.  Jim got one over 50 pounds and our young Yuji got his first Tarpon with Victor.  High tides made inshore fishing very tough for tarpon and snook.  Everyone for the week enjoyed moments of chasing bones, whether it was wading, big schools, singles, or harassing them in the rivers where they congregate in the thousands.

Bonefish ate anything and fly was determined by depth you were fishing. 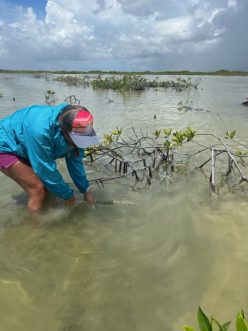 WEATHER/TIDES:
Tides were high all week with not much of a fall.  Rain, wind from the east, and clouds for the first 5 days.  Last day was partly sunny, lighter winds from the southeast.

Luis cooked up a storm in the kitchen and kept us full with his delicious cooking.  Grounds and housekeeping crew kept us comfortable and worked tirelessly behind the scenes to insure the normal working order.  Emmanuel’s son, a week old is healthy and happy.  Mother and son are now in the comfort of their own home.

It’s beautiful now with no wind, full sun, and a lodge full of returning guests. “Camp Mom” Sabrina is joined by her husband Jeff, longtime friend Don Morris is with us.  Bob and Bill are here, along with Ivar and Carl Sparks.  A fun week is in store and I’m excited to see what happens in the bay.  I changed out a sink this morning and our house school of triggerfish are moseying about in front of the lodge.  Everything is perfect.  I would like to ask our guests, readers, and fellow outdoor enthusiasts to please take a moment and research the sale of the outdoor company Patagonia.  It’s unbelievable to say the least. 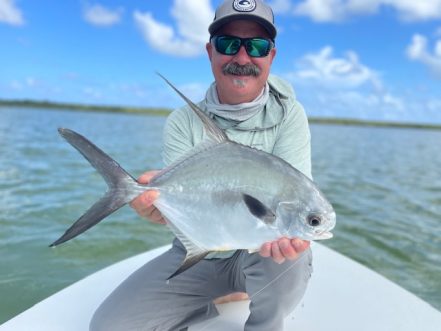 If you are wondering about this special place or have any needs for your upcoming ESB trip drop our friends at The Fly Shop a call.  As always, they’re on target and will quickly give you the latest about our operation.  Get outside and grab a hold of summer’s last few days.  Always remember to protect, conserve, and enjoy the great outdoors.  Please check in later for the next report! 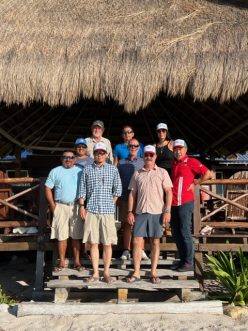