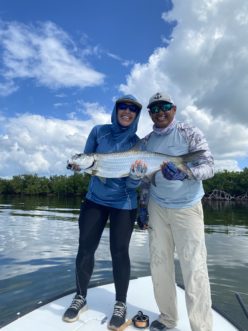 We’ve had another pleasant week here at the lodge.  It’s hard to believe that we are in the final weeks of our 2021 season.  We’re going strong, having a great time, and catching a few fish along the way.  We had the pleasure of hosting some familiar faces here and greeted Rocky Lipsman and Leo Harf to the program.  The weather for the week was very pleasant, filled with good company, great food, and a couple fish to round out another fall week. 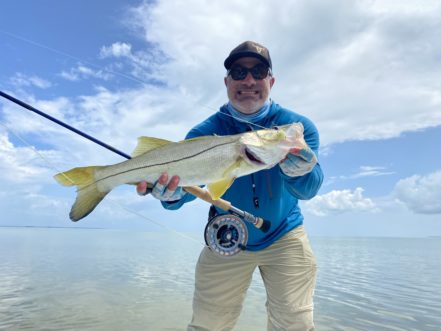 FISHING:
Tarpon fishing remains strong here and this has been one of the best tarpon fall fishing seasons we’ve ever had.  Our bay is loaded with fish of various sizes.  We’re still trying to wrap our head around the presence of some big fish that have been in our system since May.  We talk about migratory fish, and I guess the generalized conclusion states that fish over 50 lbs. are deemed migratory.  Either we have a record of migratory fish that push 100 pounds or these are actually resident fish that live around the reef, in much deeper water, and push closer to our limited view, following the millions of sardines that are thick across all the oceanside flats.  I prefer to think the later that these fish are always in our system, and I have drawn the conclusion we have zero idea of the exact patterns and movements of these fish.  Common sense seems to point towards having an unbelievable environment in front of us.  This being one of the most remote sections of any reef system provides a haven and sanctuary of sorts for fish mostly unmolested apart from a few fly anglers poking them with hooks.  Maybe these fish are residents here while they’re not migrating?  Who knows and it’s a mystery I’m fond of contemplating as I scan the glasslike ocean with all its hidden wonders beneath its surface.  I really think us floating around the main bay system in shallow water is not giving us a proper look at what’s happening around us.  We’re on to something, and as we continue seeing these impressive fish, we try to learn what we can.  Obviously, there’s a surplus amount of bait around and these massive pushes of bait happen every fall.  I was fishing the beach last Saturday for a couple hours before picking up guests and observing the sardines.  I landed a massive tarpon for being on foot (close to 60 lbs) and I took note of the different bait that was schooled up around me.  We have small glasslike minnows that are almost transparent maybe 1 ½ inches long as well as larger sardines that had a class size of around 3 inches.  The next size was a sardine that was 5-6 inches long.  There were only these three distinct sizes noted.  The locals in the fishing village throw casts nets to capture the largest of the sardine to eat.  I bought about 4 pounds of these sardines and chef fried them up whole for me to try.  Being from Northern Michigan eating fried smelt is a staple that we all enjoyed, and I was immediately reminded of the delicious fish chip I ate as a kid.  Needleless to say I have incorporated this into my diet like the tarpon have. 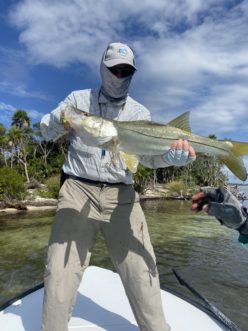 The north side of the bay is the stronghold for tarpon.  The small fishing village on that side is right in the middle of the zone, we see schools of smaller fish working and feeding on sardines.  From the village we pole south and wrap ourselves back into the bay working west as we maintain a track along the shoreline.  The tarpon peter out roughly at the entrance of a permit flat called Ensenada.  If you add up all that shoreline you would come close to 4 miles of very productive tarpon water.  Every day at least one of the boats headed over there to catch a tarpon or two before pursuing other fish.  The rivers systems are still very high and full so we’re not able to successfully hit those tarpon.  I know they’re around just hard to hit and have accessibility to place a fly.  It’s a little frustrating trying to chase the fish when you hear plenty of them thrashing and eating bait 20 yards deep in the mangroves, far away from entertaining any possibility of getting a fly through there. 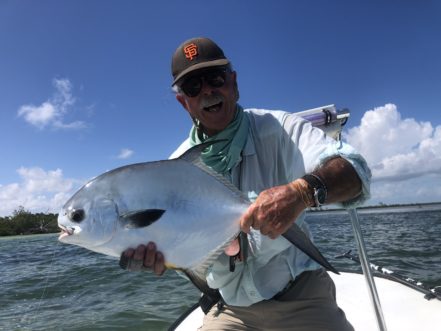 Everyone in our group of six landed plenty of smaller tarpon and we put emphasis on hitting those fish every morning.  Guest Peek Garlington landed an impressive 17 tarpon fishing as a single angler for the week.  Lorenzo (witness program dubbed as Larry Jones) had a spectacular week chasing tarpon.  He had a day with Marcos where they were on countless fish, fed countless fish, and decided landing all of them was overrated… Lorenzo is a well-schooled tarpon guru and put it together the last day on the boat with Victor landing a fish close to the 80 lb. mark.  Brock Anderson and Viki Dietchler had a day with Pepe where they witnessed rolling fish well over 100 lbs and tried hard to chase them.  This can be excruciatingly frustrating as it seemed they were always out of reach from a reasonable cast.  Dumping super long casts to large tarpon is one thing but getting a proper hookset in my experience with more than 60 feet out is tough and the usual result is thrown hooks.  Rocky Lipsman and Leo Harf (our comedian for the week) rallied to land 10 or so for their week of fishing.  This obviously excludes the number of fish seen, and jumped. 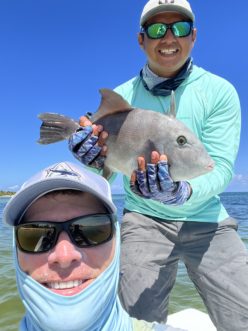 Snook were pretty much scarce for the week until an impressive 180 with the tides that occurred Saturday.  We were greeted by out a going tide in the morning, and I had high hopes of someone chasing fish in the rivers.  Brock and Viki had a great time with guide Fernando in an undisclosed location deep in the northside where they came across more than 100 snook moving through and coming out of the mangroves.  Fernando is known here as the snook guide, and he loves chasing these fish and his knowledge of their whereabouts is parallel to none.

We landed plenty of bonefish for the week for those that wanted to chase them, and Lorenzo tagged a solid fish that went 5 lbs.

Permit “catching” is still slow and it’s by no means lack of fish in the system.  Fishing is great, the catching is difficult.  We couldn’t get them to eat and had a hard time cracking the code with proper tippet and fly choices.  The northside between river one and 2 is holding an impressive number of schooled fish as well as the red buoy on the southside.  We had great shots to the schools still holding at the southern entrance.  I am not sure if these fish are staging at the entrance and going into deeper water to spawn.  We still had plenty of chances and saw more than an adequate number fish which leaves us happy with the consistent visual aspect of permit fishing.  It’s a relief to some when you can say, “well, I made great casts to the fish we saw, they followed, and just didn’t eat!”  A guide’s reassurance also helps justify this and brings your inner fishing being to be at peace because clearly it was the permit’s fault not our own.  The mantra “permit are just being permit” fills the void and promptly reads as “case closed”.  I halfheartedly agree with this and think we need to run long leaders, almost 15 feet with 16-pound fluorocarbon.  One may even experiment with 12 pound.  Those are tricky leaders to cast and the short heavy shooting lines we use today make it increasingly difficult to air out the access tippet on an already long leader. 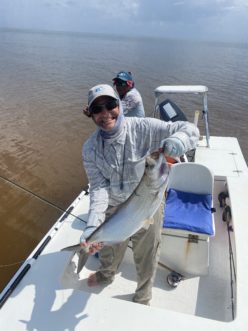 Despite my negative portrayal of the permit fishing, we did indeed catch plenty of fish and had PLENTY of shots.  Lorenzo decided to have all of his permit catching the first day with Alex and landed 3.  That was it for him for the week as well as the most landed by an angler.  I enjoy Lorenzo’s deadly efficiency to hone in on a targeted species and quickly move on once the objective is met.  Peek Garlington was able to land 2 himself and had plenty of shots throughout his 6 days.

Leo Harf came down here with the high hopes of finally landing his first permit.  He was into permit the first two days and came up short, but very close.  Wednesday came along with some tuned up casting instruction from guide Victor he landed his first two permit.  Leo is a very mellow angler, and it was hard for him to contain his excitement later at the bar.  I’m happy for Leo and congrats!  He informed me on the countless saltwater trips embarked on hoping to catch his dream and to finally have it was an incredible experience.

The group of 6 anglers landed 9 permit for the week and this brings our season totals to 640 permit with 212 guests. 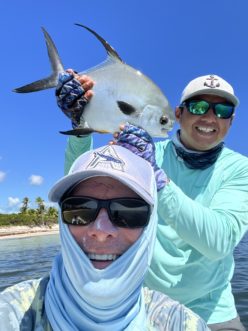 FLIES:
Smaller ragheads without yellow eyes were the crab we had the most success with.  Spawning shrimp (also without) tied EP style on a number 4 hook worked well and we did catch a permit on the classic ESB raghead tied with medium yellow eyes.

Tarpon ate everything.  Toads and EP baitfish were the styles we used and color combos that worked were: blk/purple, solid black, white/grey, red/white, chartreuse/white, tan/white, and everglade color combo.  Snook ate black/purple which was a little surprising for me.

WEATHER/TIDES:
Weather for the week was beautiful.  We had very light to nonexistent winds from every conceivable direction except west.  Glass like conditions mirrored mosaic back drops of occasional clouds moving through.  We did have a couple short lived squalls that drenched us which was a refreshing addition.  It seemed to temporarily green everything up and revamped our local bloodsucking insect populations.  Tides were very high throughout the day, and it wasn’t until Friday we saw a change of outgoing in the am with a return in the afternoon. 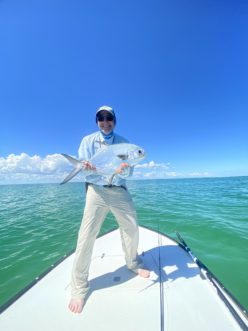 Chef Carlos worked hard for the week cooking up everything he got his hands on.  He has a wonderful chameleon like adaptation to absorb special requests and create wonderful dishes everyone can enjoy.  Emmanuel and the grounds crew kept the daunting list of “to-dos” at a minimum and made sure we all enjoyed a proper running operation.  These guys are probably the most underestimated of our staff and I can’t thank them enough for the hard work and dedication they put forth.

We’ve got a highly anticipated group that arrived yesterday.  8 friends and regulars here at the lodge make the annual October trip to fish hard, enjoy one another’s company and sip on a cocktail or two.  Close friend Kevin Vincent is amongst us and his love and enthusiasm for this place is infectious, and I look forward to spending time with him for his third week this year.  Ralph Smith would be dubbed as the leader of the pack and what a cool, fun guy to be around.  He’s been haunting these waters well before my existence in the saltwater scene and has chased fish up and down the Riviera since the early 90’s.  He knows the bay as well as the guides and I’m sure he’ll catch a fish or two. 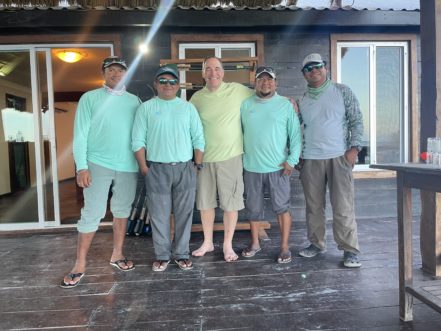 I hope you have some wonderful plans for the week and are able to get outside to enjoy some mid fall weather.  I miss seeing this season with its spectacular color changes and the extra layering that becomes necessary.  Go sip some warm cider and remember to drop a line to our friends over at The Fly Shop.  They’re standing by to give you the up-to-date info about us at ESB Lodge and any number of incredible destinations one might wave a fly rod.

I hope you have a safe and wonderful week and please catch us later for the next report!