Another week has flown by here as we quickly approach the end of our first half of the season.  We had the pleasure of hosting four return guests and longtime friends, in the addition to three new faces.  We had an incredible week of fishing, with fairly good weather.  The heavy winds continue to make casting a challenge.  Our guides and staff delivered excellent service from the boats to the dinner table, and ensured our guests had an enjoyable and memorable stay at ESBL. 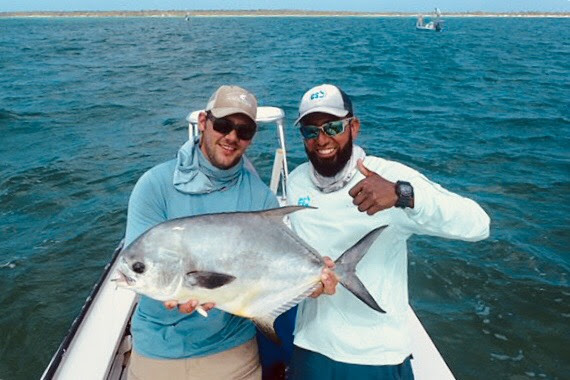 FISHING
Like most weeks, our fishing was determined by weather conditions.  The sun was shining for most of the week, but the wind has continued to limit us to certain areas of the bay.  Making the long run across the bay is often worth the drive to gain access to our river systems on the northwest side.  With the rough conditions we experienced, focus was mainly on the southern shoreline.  This in turn worked out in our favor, as our “house flat” proved to hold incredibly high numbers of permit.  This area is a short ten minute boat ride back to the launch, and we spent most of the afternoons targeting permit on this flat.  Large schools of permit were consistently spotted and caught in the same area every day of the week in the afternoons.  Not only were these schools large with 40 – 50 permit in them, but the fish themselves were big.  Every fish landed out of this area was in the 12 – 20 pound range.  Return anglers Nick and Polly Miller came to the lodge with large tarpon in their sights, but were unfortunately unable to target migratory fish with the rough conditions in the large opening on the north side of the bay.  Nick and Polly were content with the permit fishing alternative, landing four 20 pound fish on their second day out.  They proceeded to catch four more throughout the week, landing eight permit total between the two of them.  They also landed a tarpon, a snook and multiple bonefish during their stay.  Longtime friends of the lodge David and Janet Dill joined us this week for their fourth trip to ESBL.  With rough weather experienced during their last trip, they were ready to hit the bay hard and make up for some slower days.  The two of them landed 6 permit and lost a handful of others, in addition to jumping a large tarpon and catching multiple bonefish. 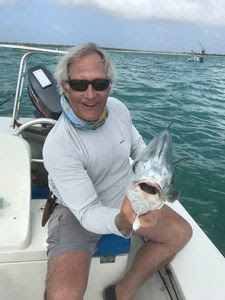 Dick Meyer was a new guest to the lodge, and enjoyed exploring the many different waters of the bay.  Having never landed a permit on the fly, Dick set out on Monday with guide Fernando aiming to change his luck.  He was able to land his first and second permit.  He continued to catch them throughout the week, landing a total of six before he had to step back on the plane to return home.  What an accomplishment! Dick was nice enough to share the boat with me on Wednesday.   I had of course heard about the action going on out there in the afternoon from the guests and the guides, but was still amazed to see it happening in person.  It is my belief that this phenomenon has to do with the permit spawn.  Whether these fish are gearing up to head to deeper water to spawn or coming back from it, we are not sure.  Regardless this was an incredible week to target large permit in the bay.  John Telfer and Greg Smith were also newcomers to our operation.  Greg landed his first three permit on the fly while John ended the week with an astonishing six permit to hand. 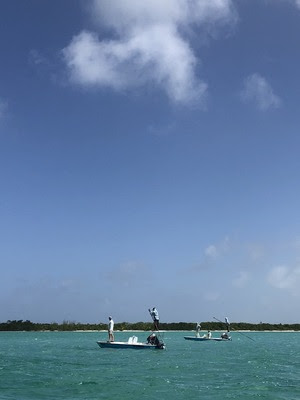 The group collectively landed and incredible 30 permit for the week which brings our season total to 227 permit with 146 guests.

With the large schools of permit being spotted mostly in the afternoon, we often took the morning to chase large bonefish and the occasional single permit in shallow water.  With the tide being high for most of the morning, it made it difficult to target juvenile tarpon and snook before heading the permit feeding frenzy in the afternoon.  We were able to locate some tarpon and snook, and coaxed them out from the mangroves to eat.  The afternoon would have been the ideal time to chase tarpon and snook with the lower tide, but it is difficult to break away from an area that is loaded with permit to hunt other species.  David Dill did manage to hook into a large migratory tarpon, but after a short-lived fight the fish broke off.  If we are fortunate enough to experience slicked out conditions we will be targeting these migratory fish harder in the following week. WEATHER/TIDES
Sunny conditions were experienced for most of the days during the week.  The strong southeast winds continued all week long providing challenging conditions.  We had the tide rising all morning long, and then begging to drop at around 1 p.m. for the rest of the day. 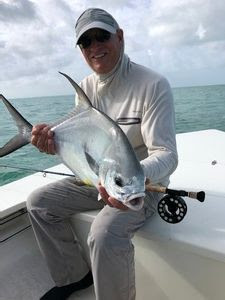 A size #4 white crab was responsible for most of the permit caught this week.  We believe this pattern was so effective because of the off color water the schools were feeding in.  There was a lot of “mud” in the area we were targeting in the afternoon.  When large schools of permit feed they can churn up the bottom and create off color water conditions.  The white color was the ticket in this situation.  The #2 Tan Squimp was not the go-to fly this week, but the rule of not being allowed off the property without at least half a dozen of them remains in place.  Next week we may be right back to the Squimp being the most productive.  Bonefish were happy to eat all sorts of shrimp patterns in sizes #4 – #8.  Some barracuda were also landed on wire leader and an articulated bright green needle fish imitation.

The kitchen staff continued to deliver our wonderful cuisine.  We are incredibly proud of the dishes we serve and the hard work, preparation and attentiveness to detail the kitchen provides.  The house staff was on site readily available to accommodate any request the guests had while ensuring a comfortable stay. 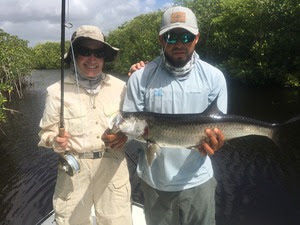 We are excited for the arrival of eight guests this upcoming week.  Four of them out of Houston, TX will be returning from last year.  Luciano Alba and his father Roberto own Laguna Verde Lodge in Argentina, specializing in giant trout out of Jurassic Lake.  Dane and his father made a visit to their lodge this last winter, so we are excited to show them the operation himself and Chiara have built here in the Yucatan.  We hope they will enjoy sight fishing the flats of Espiritu Santo Bay after a long season of catching double digit rainbow trout out of Jurassic Lake.  It looks like the wind might give us a slight break this week.  We hope the permit continue to occupy the southern shore in such astonishing numbers.

We thank everyone for another great week and please contact The Fly Shop for additional information on this wonderful operation.  We hope those of you in the Northern Hemisphere are enjoying the summer and getting some opportunities to fish some of your local waters.