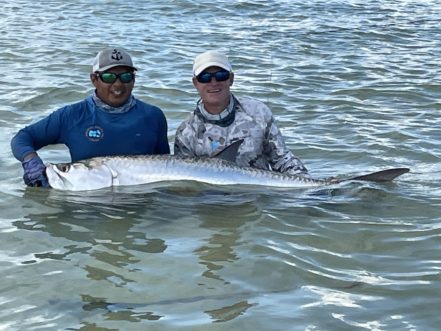 It’s been another fantastic week here at ESB Lodge. We had the pleasure of hosting a wonderful group that hail from Massachusetts. They’re a serious group of fishermen and are a closed group of gurus dubbed as “Cape Codders”. We love these guys and after missing a year due to pandemic closures it was awesome to get the band together for the week. To say there was excitement in the air is probably an understatement as they made the journey down to the Yucatan. These guys plan, critique, organize, come ready as they could ever be for fishing our system. I really appreciate the time and effort the group puts forth in their preparation. The mood and vibe are infectious for us at the lodge and it’s a fun wave to ride, makes us work a little harder, cook a little more, and fish as if it’s your last shot. Cape Codder’s group of fishing assassins did what they set out to accomplish. 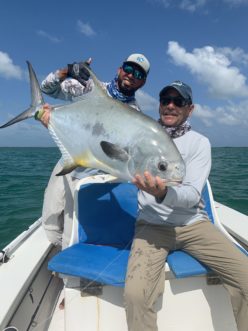 FISHING:
I’m sweating profusely as I write this report.  It’s been hot and sticky for the last week and we’ve had a great run of fall weather. I was anxiously checking the weather a couple weeks ago for the last 7 days and it wasn’t looking great with a possibility of heavy rains for half the week. Everything worked out, the forecast was what you want for a week of flats fishing. We had a couple showers here and there with some clouds moving through, but overall impressive conditions that one should never take for granted.

Hot and sticky equals tarpon and the crew nailed a lot of tarpon. Everyone in the group landed plenty of tarpon with numbers hitting close to 60 with an unknown amount of hooked, jumped and lost. We continue to work the northern cut that holds our larger fish in a deep channel. This channel serves as a highway for these larger fish coming and going while they are following larger schools of sardines. It’s sardine season here and this massive movement of baitfish really is like putting jumper cables to the tarpon fishing. I have zero idea about the movement or migratory pushes of these sardines, but it’s become very apparent and has been our last 4 fall seasons. 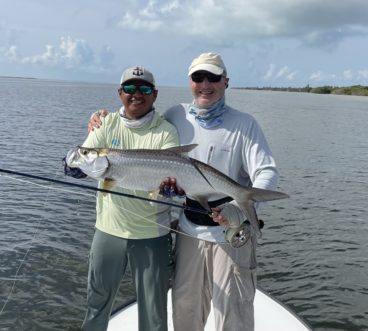 It was the worst tide possible for hitting tarpon in the backcountry which we normally accumulate our weekly tarpon numbers from. We’ve had a huge tide which is a little unusual for us and this pretty much cancelled out the wonderful river systems we have for guests to explore. I am confident they’re loaded with snook and tarpon but are far back, beyond the reach of any fly, residing in flooded mangroves. The small fishing village on the northern shoreline served as the central location for much of the tarpon fishing. We worked anywhere from along the shoreline, outwards roughly 100 yards in deeper water. From the village north 200 yards and vice versa south and southwest a ½ mile was the zone. There are two sides to this story.  While it was very productive, we had to deal with big mats of Sargasso piled up. It got a little frustrating for some as you seem to be cleaning your flies off almost every cast.  The approach was throwing darts into the small openings in the mats which resulted with a take most of the time. The Sargasso has been thick this year being one of the worst on record.  Rather than complain about it, natural resources found a way to adapt to ever changing ecosystems. Sardines sought cover in the ocean algae and tarpon also love cover and even more when there’s an ample amount of food around.  Ron Reif and Tim Lynch had a banner first day with guide Pepe and the report was they simply lost count of hooked, landed, and lost fish.  We landed a few big tarpon that were around 80 lbs. Michael Gerrity nailed a big one first day with Alex and complimented it with a slam.  Geoff Gold was out with Victor his second day and got another big fish.  Rick Wilsterman commented his first day he really wanted to catch a big tarpon. I warned him this really isn’t a known time to target these larger fish and we’re more apt to see bigger fish in the summer months.  He ended up getting an impressive fish easily 80 lbs. with Alex the last day. A lot of sweat and tears went into that anticipated catch. I’ll keep preaching about brining sink tips or better yet full sinking lines.  You must add them to your arsenal and have them rigged on a 11 or 12 weight.  If you don’t feel like throwing your arm out go lighter with the 11 and a sink tip, this will be sufficient. 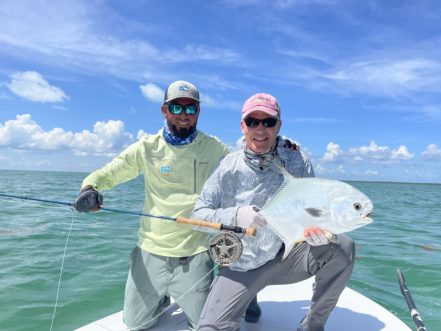 Our snook fishing was slow for the week with only one fish landed that came as a surprise from under a sargasso mat. We seemed to have a “false run” of snook a couple weeks ago and I thought we were going be thick with snook at this point. Not the case, and I’m confident if we get a couple weeks with a straight north wind we should see some fish moving in.  As mentioned above with the higher tides we couldn’t really get to the abundant population of residents we have in the fishery.

We’re continuing to have impressive numbers of permit in the system, although they are holding in concentrations towards the mouth of the bay. This is our program to rack up numbers and it’s great to see majority of the fish hungry and eager to hit crabs. Southwest corner of the bay is holding occasional singles and doubles which are much larger and difficult to catch. Friday was a dreamy day for front man Vinny Foti.  He fished hard with guide Alex chasing permit and they only saw three fish, which is tough. Vinny cast to the small group and the largest of the three charged and munched the crab. More than 30 minutes later Vinny was holding his largest permit to date.  A beautiful 25 pound fish. I was ecstatic for Vinny, a wonderful guy that carries one of the best attitudes and demeanor towards fishing I’ve ever seen. Great job my friend and relish the memory. Vinny and Steve Unsworth had a great first day with Alex racking numbers and collectively catching the most permit in the group.  Steve Unsworth landed 6 and Vinny had the highest with 7. 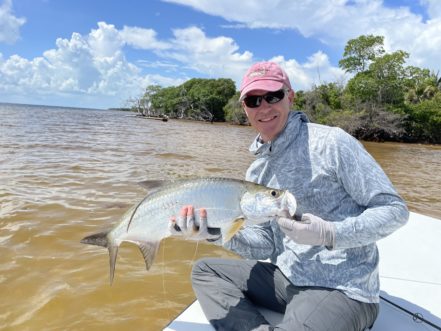 The group landed 25 permit for the week, and our season totals sit an incredible 656 permit with 214 guests.

We’re on a roll with permit and guests are enjoying the ride immensely. Please keep in mind with given numbers these fish are still a synonym for difficulty. We’ve fortunate with great conditions coinciding with a wonderful fishery. Those that chose to chase with bonefish were rewarded with plenty of fish and we have fantastic numbers of bonefish in our system  I also must add that we set the mark with numbers of grand slams caught by a group.  Cape Codder’s collectively landed 10 slams and Rick added the solo super slam.

FLIES:
You’ll never guess our top permit flies for the week. Ragheads tied with yellow eyes and spawning shrimp led the charge for productivity. You must arm yourself with a healthy number of these permit flies if you’re headed this way soon. I strongly suggest loading up with two dozen crab and shrimp patterns from The Fly Shop.  They currently have a great inventory and it’d be wise to give them a call. 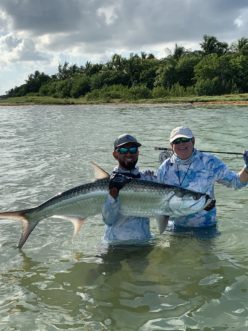 Tarpon flies that were the most productive were toads and EP style in a black/purple color phase. Other colors that worked well were Chartreuse/white, Grey, Black/Red.

Bigger Tarpon hit bigger flies tied on 3/0 sized hooks. You can get away with anything that slightly resembles the size of a 4-inch sardine.  We put much more emphasis on a larger quality hook than anything else.

WEATHER/TIDES:
Weather was beautiful with light winds from the northeast and partly sunny skies.  We had a huge incoming tide that kept the bay system stacked with water.

We might’ve beat the average weight gain of each guest at 7 pounds. It’s a record we’re taking leaps and bounds to accomplish as Carlos and the kitchen crew crank out delicious cuisine. It’s flavorful, fresh, and authentic.  Emmanuel worked hard with the ground staff and kept the lodge up in running for guest comfort.

Our weather looks fantastic as we settle into another week here. We have high sun, zero wind, and a pile of work I need to get done as I longingly think about the great beach fishing.  Lorenzo is with us for another week, and we continue to be graced by the blessings of his two ex-wives. Peek Garlington joined us for his second trip this year, he’s a solid well-rounded outdoorsman who has fallen hard for our special fishery.  Brock Anderson brought his better half this week, Viki who we’re always graced to share our place with. 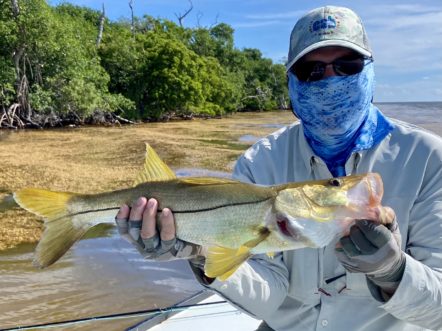 Hopefully you have some pleasant fall colors in your own neck of the woods as we settle into mid fall. It’s a great time to be outside, chase a fish, and enjoy the seasonal transitions we look forward to.  If you have a minute drop a line to our friends at The Fly Shop and they’ll bring you up to speed on the happenings of ESB Lodge.

I hope everyone has a great week and please stay tuned for the next report. 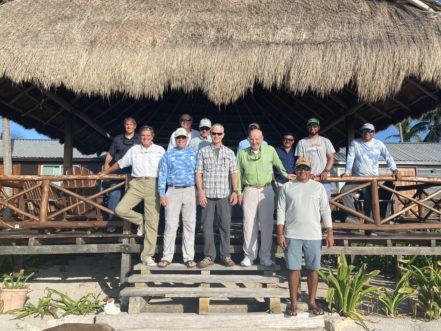