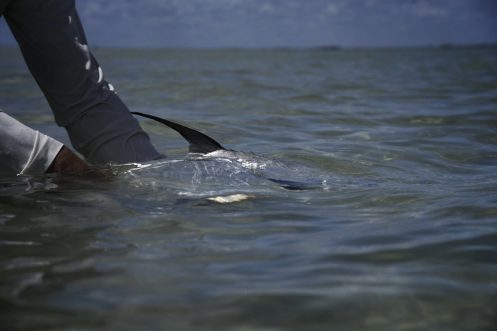 We’ve enjoyed another wonderful week here at ESB Lodge. Unfortunately for guests we lost our last fishing on Saturday to Tropical storm Gamma as it made landfall north of us. We were lucky coming out of the storm fairly unscathed with no damage to our property and everyone remained safe. Heavy rainfall and winds brought a big storm surge that flooded the local fishing village where we launch guests from each morning. Myself, along with the guides helped yesterday morning digging things out with the locals and making the road passable for this upcoming week so we could get to our boats and so the lobster co-ops could get their catch out to local markets. We are proud of our relations with locals in the community and it is heartwarming to see a collaborative effort displayed on both ends. 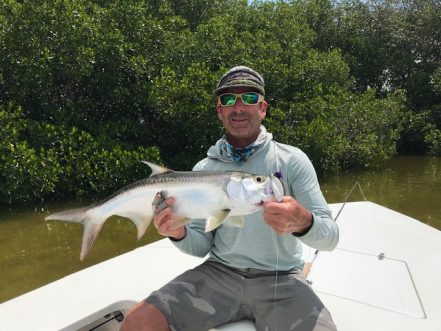 We were joined by four new guests for the week.  ESB Lodge was happy to host Clark Smith, a fly shop owner/ outfitter based out of Sheridan, Wyoming. Clark also recently transitioned into becoming the new owner of travel- based fly- fishing company, Angling Adventures. He brought along close friend James Ryan and Mike Schwartz. We also had new guest Ed Church who had enjoyed his first saltwater fly fishing trip with The Fly Shop’s own Eric Ersch on Crooked Island in the Bahamas. Ed enjoyed it so much he jumped at the chance to come down and fish with us. Don Morris stayed on and completed his second consecutive week with us. Don truly has become ingrained in our ESB Lodge culture and it’s hard to imagine this place running without Don around.

FISHING:
I thought the fishing was decent for the week and all of our guests were able to land plenty of fish. It seemed to go in intervals of productivity that had guests fishing hard with little success and then experiencing a banner day. Monday mornings with guide Alex Martinez continues to be a success and he was able to find a couple nice schools of permit. Guests Clark Smith and James Ryan succeeded in landing 8 permit and this was James’s first couple permit on fly. I asked Ed Church what his hopes were in terms of fishing for the week. He mentioned to me that he had caught bonefish in the Bahamas and was excited to try and catch permit and tarpon if the chance became available. I told Ed he will definitely have the opportunity and we will work hard to fulfill his bucket list. Ed went out the first day with Victor and decided he did not want to fish right away and took advantage of the calm conditions to take a quick swim and snorkel a bit. Ed returned to the boat was in the midst of toweling off and Victor noticed a nice permit casually swimming towards them. Ed, with no time to gather himself promptly grabbed his permit rod and first cast hooked, fought, and landed the permit. This is classic and I cannot think of a better way to start your week. First day, first fish, first cast, first permit! Ed then proceeded to catch another smaller permit later in the day as well. We were ecstatic for Ed and gently explained this is not entirely the normal progression of how someone usually lands their first permit. Later on during the week was also able to land his first tarpon. Well done Ed and I’d be lying if I were to say some of us may be a little jealous of your second week of fly fishing in the salt. 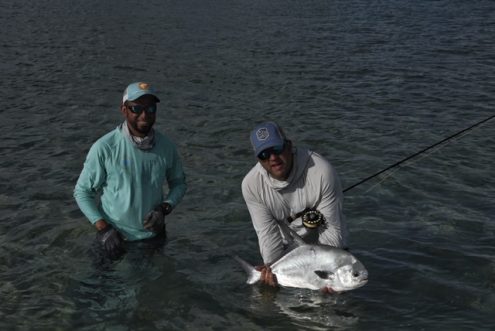 Guest Mike Schwartz had a good week and was also hoping to land his first permit. He had some great shots and saw plenty of fish the first few days but it wasn’t until later in the week along with guide Victor he got a slam with multiple permit. It was fun to witness Mike’s ear to ear grin during dinner that night along with the additional bottles of wine. Don Morris had another great week and contributed to another 6 permit for the group total. One of the last days out Don was with guia Fernando and landed 4 permit and had Fernando land a permit as well. Don started fishing with us when we first opened in 2017 and has a special connection with Fernando. He landed his first saltwater fish with him as well as his first permit, and last week his first grand slam. I know Don cherishes his moments with all our guides but it’s fun to watch the two head out together in the morning, working as a team, and usually landing some impressive fish.

The group total for permit for the week was 21 with 5 guests.  This brings our season total thus far to 202 permit landed with 73 guests.

Most days we spent working the northern shoreline outside the bay and along our river systems further west. We had some very calm days where it became so hot and still, fishing became tough. We all hope for minimal wind conditions, but it can be very tricky to chase fish, especially permit in these conditions.  Longer casts, longer tippet, lighter tippet and stealthy leads are required. Clark mentioned to me a couple times even false casts were spooking fish. It seemed like the fish were almost on edge and spooked with incoming weather. I will admit I felt similar, closely monitoring the incoming storm. We still found good numbers of tarpon rolling and we were not successful with chasing the larger tarpon in our “tarpon cut”.  Don hooked a massive permit in the cut that easily topped 30 lbs. and it came unbuttoned after a short- lived fight. Guests saw a hammerhead shark easily the size of one of our skiffs which I am sure moved some of the bigger tarpon around and made them uneasy. I requested for the health of these beautiful fish that we rest them in fear of hooking a large tarpon, only to have it killed by a shark. We do not see many sharks of this size in our system and are careful to leave them alone. Higher tides kept the snook buried deep in the mangroves for much of the week and some tricky casts were required to place a fly in front of them. Our bonefish numbers remain strong and guests had their fill whenever the desire to chase them came about. 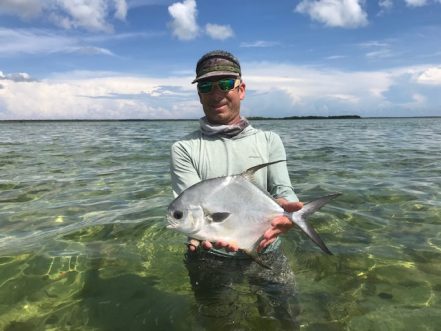 FLIES:
White Casa Blanca ragheads, smaller spawning shrimp, and Squimps were all hot tickets for permit. These are not doubt the most productive flies we use to chase permit.

Toads and EP shrimp continue to work well for tarpon and snook. We like color schemes black/purple, chartreuse/white as well as natural sardine colors. Our bay is packed with these small baitfish and it’s important to have a pattern representing these on a 2/0 hook

Bonefish were eager to eat any small shrimp pattern in sizes #8 -#2.

WEATHER/TIDES
Weather for the week was mostly overcast with some rain showers passing through. Wind was minimal for most of the week coming from the north, northwest, and west. Last Saturday we experienced tropical storm conditions. The tide was mostly high for much of the week and as Tropical storm Gamma approached we never experienced a low tide.

Chef Carlos and the kitchen crew cooked up a “storm” delivering delicious cuisine to the table every evening. I also thank our house staff for keeping the lodge clean, operating, and comfortable for guests. 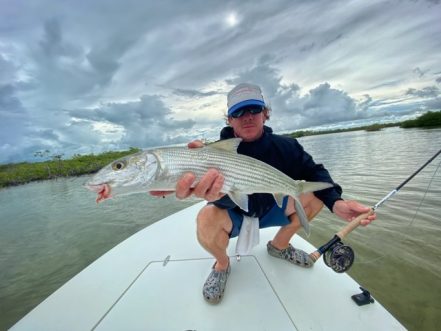 This upcoming week we have some new guests that have yet to experience ESB Lodge as well as a wonderful couple Jim and Anne joining us again for their second trip here. They fished with us during the first fall season we had in 2017. It’s great to see them again and fun to catch up. The weather looks decent for the week with scattered rain showers, some sun, and lighter winds. Wind direction is forecasted coming from the west our first few days. I hope everyone is enjoying their October so far and able to get out and enjoy the fall season.  Feel free to give our friends at The Fly Shop a call to inquire about this special place or get up to date info with gear, travels, or any questions you may have. Please enjoy your week and stay tuned for next week’s report.

From your loving friends at ESB Lodge 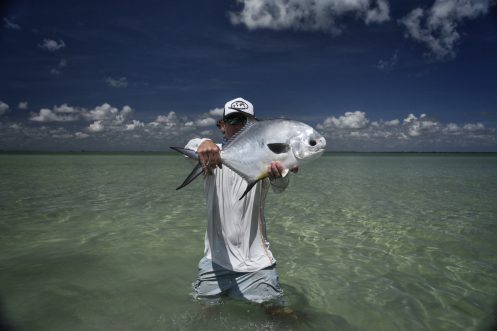