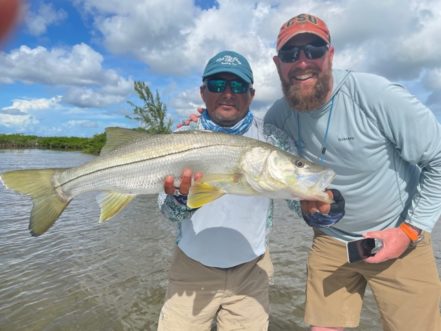 We’ve enjoyed our last week here at the lodge, thus concluding our 2021 season.  It’s hard to believe the year has passed already and I can’t believe we have 2022 in our sights.  8 guests joined us for the last 6 days of fishing.  There are many familiar faces we’ve had the pleasure of hosting over the years.  Clients referred to as guests, and in turn become friends.  It’s a funny distinction with friends and I feel as though I was almost on a fishing vacation amongst this last group.  We know them well, and they have worn grooves into the identity of ESB Lodge.  When I think of this place names such as Dave Merritt, Mike Scott, Joe and Bill Checchio come to mind.  Steve Cart’s southern wit and presence has become absorbed in ESB’s culture and he’s a rooted “regular”.  I am humbled to have these friends return year after year, loyalists to a fishing community and the desire to enjoy wild places.  We built this operation for friends like this.  There were some new guests, friends of friends that were touted along to see what all the hype was about.  We welcomed them, reunited with the others, and ventured out each day to catch a fish or two. 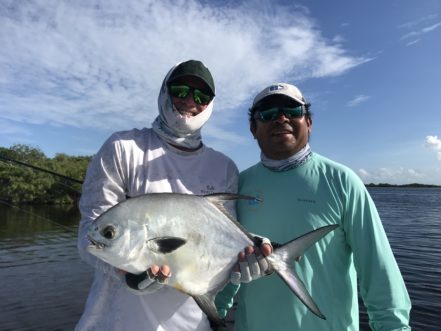 FISHING:
I was nervous for the incoming crew last Sunday.  I had been monitoring the weather some days before and it looked ugly.  My fears were confirmed with the late hours of Sunday around 11:30, a driving, almost painful rain started.  It didn’t let up and the conditions stayed as such until Thursday.  Perfect conditions for such a great group, right?  Internal misery settled inside of me as we had to come to terms with the dealt hand of mother nature.  We had options though, and guests played their cards well given the circumstances.  Alcohol helped in the evenings, warming guests up and easing the current state.  It rained so hard for four days it became comical to me.  We obviously couldn’t do anything about it but sit in it and get wet.  At the end of each fishing day there wasn’t a dry inch of skin or clothing to be found.  Cold prunes are the best way I would describe the anglers. 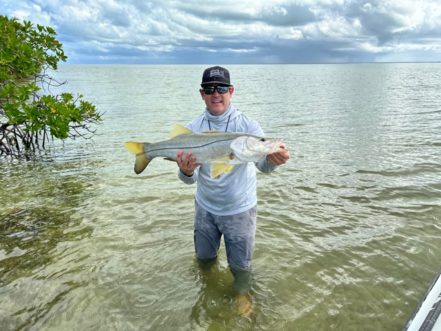 A continuation of the tide cycle from the previous week helped us access tarpon and snook.  Outgoing tides exposed fish in our rivers systems, and we hit them hard.  Each guide had their mangrove slot and worked them each day.  I felt it was a race against time with freshwater blowing out all possibilities.  River one from the boca working back east was a tarpon stronghold.  Remember the island I talked about exploring with Fernando the previous week?  River two along the left side held good numbers of snook.  River three had less fish but produced for us.  Rio Locos or river 3 ½ as we also call it was a safe bet.  The little “sunken boat” lagoon had some tarpon, but exact timing was crucial otherwise we’d come up empty handed.  Most everyone caught both tarpon and snook or at least one of the two.  There was secret little creek Pepe and Victor liked to fish just south of Ensenada that was an aquarium at times with fish.  Mike Scott and Ethan Scott had a banner last day each caught every imaginable species besides permit with Victor as their guide.  Joe and Bill Ingram also had a great day chasing and catching some larger snook with Alex. 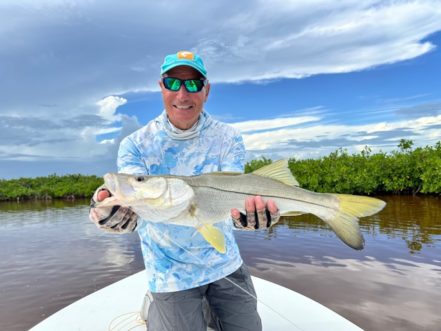 Its somewhat unfortunate bonefish don’t share the same spotlight as our other targeted species.  I was happy to see guests chase bonefish with given conditions and we had plenty around.  Everyone caught their fill of nice sized fish that were found in the rivers as well as some shallow water.  Guests had fun stalking to bigger singles that tailed in skinny water.  I also heard from guests that the sizes of bonefish have been getting bigger which we are very happy to see.  With netting no longer allowed in the bay we feel the estuaries and river systems on the north side are grounds to potentially grow some monster fish in the years to come. 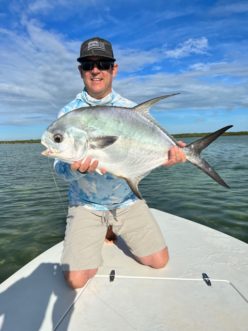 Permit fishing was very tough due to zero visibility and some fresh water leaching onto the flats.  We had some small breakthrough scenarios that produced some fish.  Deep in the southeast part of the bay Victor found a small school of permit calmly munching crabs that were in the surface film.  Countless fly changes resulted in Victor pitching in his floating crab from a previous guest and that did the trick.  Dave Merritt caught one and his friend Luke Buchman succeeded in landing his first permit on the fly.  Luke is an avid trout fisherman and with Dave’s coaxing he jumped at the opportunity to come for a week of fishing.  Bill Ingram had the high rod for the week with three landed permit.  Steve Cart brought friend Mike Fogleman along for his first flats fishing trip.  We all know the difficulties of permit fishing and the hours, days, and weeks some endure to land their first fish.  Mike landed his first with only three casts thrown in his life to permit.  I have seen guests land their first permit on the fly here and it coincided with their first salt trip.  I have never seen an angler get a permit with only three casts into it.  Quit while you’re ahead my friend.  Steve relieved a similar situation when him and Mike were chasing peacock bass in the Amazon.  The guy is a natural!  They were on guide Marco’s boat for the day, and they found an awesome school of fish at the boca of red lagoon and hit the lighthouse point on an outgoing tide for some tarpon in the afternoon.  They were close to a true slam but ran out of time searching for bonefish. 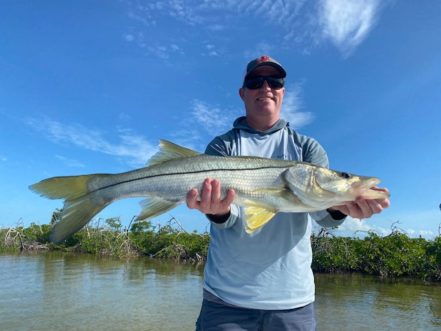 The group tallied 6 permit for the week and this brings the 2021 season to an incredible 790 landed permit with 246 guests.  This has by far been that most productive permit year we’ve had and I’m still in disbelief of the incredible numbers of fish seen.

TIDES/WEATHER:
We started the week with a nice falling tide and pounding rains with heavier squalls at times.  Later in the week with the aid of the full moon we saw higher tides with a hard fall that started on Saturday around 3:00 PM.  The last two days became nice with one day being mostly sunny and the other relatively calm but still overcast.  Wind direction started the week from the north and we had an easterly wind the last two days with a slight touch from the southeast.

FLIES:
All manner of flies worked for snook and tarpon.  I couldn’t really peg one fly that stood out which seems to be a common occurrence with these fish.  Four boats had success the same day with different flies.  I’m sure there’s a lot of factors playing into this with repetitive pressure, varying depths, types of cover which translates to a multitude of various baitfish.  I know I’m leaving out some flies out, but the bulk consisted of the following: Dave’s ESB snook fly in white, tan, white/tan, white/grey, EP baitfish in same color schemes with the addition of chartreuse.  Tarpon toads and smaller baitfish worked well in black/purple.  I have an unknown tan baitfish fly that worked well for snook.  A guest previously gave it to me, and I have zero idea what it is but it works.  It resembles a “laid up tarpon fly” tied by Umpqua. 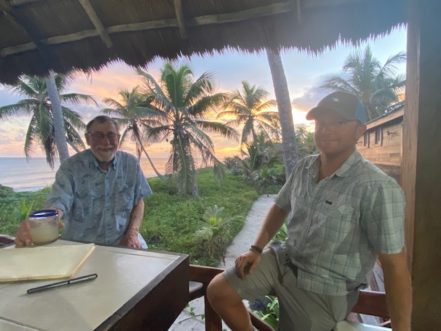 Carlos and the dream team outdid themselves for the last week cranking up delicious food and plenty of it.  I’m very happy with where we are at with our food, it’s not complicated, sourced locally, and tasty.  Emmanuel and the ground crew worked out any kinks that came up and kept the lodge up and running in a fashion fit for guests.

So, there it is, another year in the jungle.  We were fortunate to avoid any serious storm damage and saw a slight downtick with pandemic driven issues.  Knock on wood we have eluded any positive cases here at the lodge and I thank all the guests for being proactive as they saw fit to keep us safe.  As of next season we will enjoy a fully vaccinated crew which comes as a relief to me.  We’re busy right now and it’s hard to believe just the other day our dining room was filled with guests.  Now we have at least 30 workers on site breaking, repairing, painting, stapling, all manner of projects as we anticipate another sold out season coming quickly.  Trucks and SUVs are finally getting the treatment they need as we nervously raise them on lifts and inspect the damage of having too much fun.  New layers of gel coat are being applied to the boats and our dear 40 stroke engines underwent the usual closing protocol.

I find myself completely at peace and am happy with where we are as an operation.  Chiara and I are extremely fortunate to enjoy what we do and are forever in debt for those that carry the passion to enjoy wild places.  I can’t thank everyone enough that made the trip this year, we love the support and enjoy the lasting friendships.  We’re really excited for a new season around the corner and I’m also excited to charge to Patagonia for a quick three weeks of R & R.  We’ll be aiding a close friend in ripping the new sticker off his recently built lodge on the mighty Limay River, hanging out in San Martin, and renting a house on the Quillen river.

I need to take a moment as well and thank our wonderful friends at The Fly Shop.  They have done a tremendous job with us and have truly been by our sides every single step of the way.  They are not only the best in business (hands down) but their just good people all around and I am honored to have a wonderful relationship with them.  We would be nowhere close to where we are now without their help. 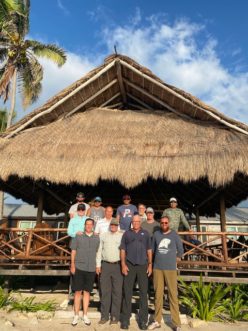 Hopefully everyone has some fun planned for the upcoming holidays and remember to take a second and enjoy the beautiful outdoors.  Feel free to check in anytime with Chiara and I and we’ll you keep you up to speed.  I give you all the biggest “THANK YOU” one can muster in a newsletter.  Go eat some turkey and we’ll see you in 2022.

Sincerely from the entire staff of ESB Lodge, our three dogs (Negri, Canela, Lucia), Chiara and I,