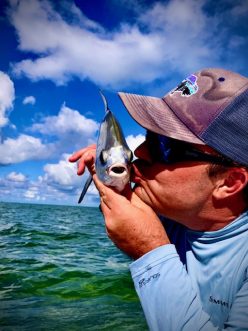 We’ve enjoyed another wonderful week here at ESB Lodge. We were joined by 5 guests for the week, four of whom had never been to our wonderful operation. Close friend Marlin Roush joined us for his second trip to ESB Lodge and we were happy to see him return. On November 8, I was waiting at our jungle airstrip to receive the group and when the plane landed Peter Herzog stepped off with his son Austin.  Peter called me out and said we’ve met before and it was nice to see me again. I was a bit caught off guard and provided a numb (neutral) response that it was great to see both of them. I chastised myself in lack of remembrance and wallowed in a fume of light embarrassment. Without skipping a beat, Peter mentioned to me that we had met seven years ago at Paradise Lodge when I came to visit the area in hopes of finding future saltwater destinations to host trips. I laughed immediately and a memorable week came flooding back as I reminisced of this special time. This was also the week Chiara was visiting her father before embarking on a path to chase her career as an Industrial engineer in Sydney, Australia. Peter said he had enjoyed watching both of us coincidentally meet for the first time and could plainly tell I was doing my very best to spur a budding relationship with Chiara. Both Peter and Austin said they had little hope for me at the time but appreciated my efforts. We fast forward seven years and I am the product of owning an incredible operation and married to a very special person whom I am lucky to share my life with. I was extremely excited, Chiara a bit embarrassed, and it was fun to share with them our wonderful lodge and operation. 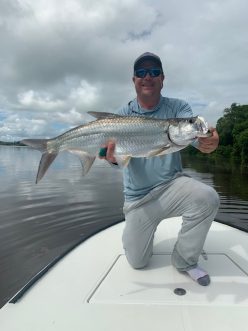 We were nervous about the weather last week and still picking up pieces of a disastrous week from before in the aftermath of Hurricane Eta. I didn’t know what to expect with weather, road conditions, and the condition of our fishery. We had received a total of more than 40 inches of rain and this can lead to some difficult conditions due to an excessive amount of freshwater in the bay. All the variables listed above proved true and we struggled momentarily with uncharted procedures of approaching difficult launches, and drastic changes to our fishery. With a chameleon like adaptation to situations and quickly made decisions, I stood by and watched an incredible week of fishing unfold. Our guides and staff already taxed with more than 80 straight days of work put on a show of resilience and teamwork to provide another seamless week for guests. 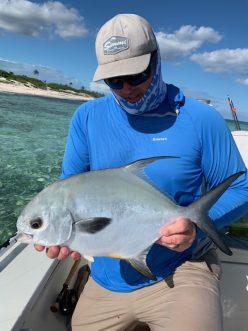 FSIHNG:
Fishing was tough in the bay, extremely difficult to find areas where things were not flooded out with too much freshwater. For obvious reasons saltwater fish vacate flats when salinity levels drop and every living thing in that environment relocates to areas outside of affected zones. Monday was tough and guides were a little nervous and worried about the conditions they saw. Tuesday began to shed light on the bay, and we found some places where there were still populations of bonefish with a snook or two thrown in.  Due to road conditions and a local effort with road repair I had enough and we formulated a plan to launch guests right in front of the lodge for the remainder of the week. This is the first time we have done this and I thought it was awesome. Wind and weather conditions were almost glasslike due to western winds and made the morning commute relatively easy. Out of possible ingenuity (or exasperation) the guides sought plans of fishing and working flats entirely in front of the lodge, oceanside, and moving across the bay to the northern exposed shoreline. We frequented areas in the bay like the first river system, skipped the second river system, and worked outside of river three and Rio Loco’s. There were A LOT of fish outside the bay in front of ESB Lodge, all the way to the light house point. Huge schools of tarpon were found, schools of larger bonefish, occasional permit, and groups of triggerfish all were found.  A couple guests landed the majority of a slam late mornings, multiple days. This occurred less than 5 minutes from the lodge. Guide Victor had Tony Schopf and Ryan Rice on tarpon schools that surpassed 100 fish and were more than enthusiastic to eat. They lost count of jumps and landed fish at one point.  Guide Victor is a well versed and experienced guide. He mentioned to me later that he had never seen such large schools of tarpon that were not shy of anything and hung around the boat for the better part of 3 hours. They would follow tarpon toads and EP baitfish all the way to the boat and eat flies less than 6 feet from the rod tip. Missed hook sets were quickly forgiven as multiple fish fought over the baitfish imitations. Big permit would appear out of the schools of tarpon and quickly disappear. It seemed like a smorgasbord of fish. That same day Tony and Ryan succeeded in landing their first grand slams and a first permit for Ryan. Ryan would later on in the week land another permit with Victor. Peter and Austin had a fun week chasing tarpon and some snook around the mangrove islands of river one and Rio Loco’s. Peter had landed a couple small permit 7 years ago with guide Fernando at Paradise Lodge and last week Austin was able to seal the deal and landed his first permit with guide Fernando. The stars continued to align for Austin, and he rounded out the day with his first grand slam. We had customary tequila shots to celebrate angling achievements and progressed that night with a shot to represent each fish. I was informed as an owner it was respectful to partake. I found myself obliging partially and the evening went along blissful, and conclusively blurry. Close friend Marlin Roush had an awesome week here with us. He was supposed to have another close friend Ron Hagan join him but due to medical issues had to back out the last minute. Marlin had his fill as a single angler for the week and went home a tired and happy guest. Fishing solo almost 50 hours on the bow can be tiring and tough both mentally and physically. He had decent fishing beginning and middle of the week. Guide Victor took him out Friday and they accomplished a super slam. Marlin teamed up with Fernando the last day and jokingly declared in the palapa at the end of the day he only succeeded in a grand slam for the day. What a great way to finish strong for a week of fishing. 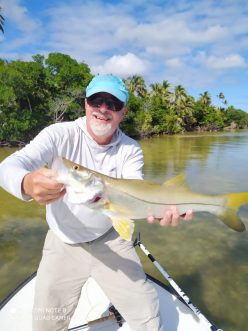 Our group of 5 anglers landed 6 permit for the week and this brings our season totals to 104 guests with 266 permit.

FLIES:
ESB white Raghead Crabs with yellow eyes and EP spawning shrimp worked for our permit for the week. For the crab we opt for a #2 hook and the spawning shrimp, a #4 2X long hook. 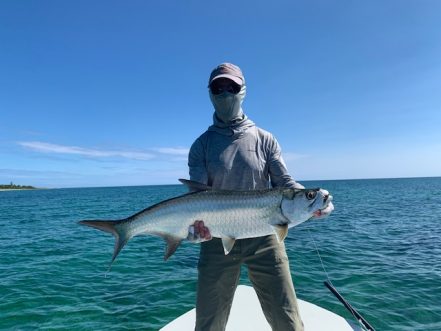 Tarpon and snook were landed on toads and EP style baitfish. Our usual color combinations worked and has provided consist success for us throughout the season. We use more bright color combos for tarpon, black/red, purple/black, chartreuse/yellow. Snook tend to eat more natural colored baitfish imitations and color phases white, white/grey, and color combo “everglade.

WEATHER/TIDES:
Weather for the week was pleasant with minimal wind out of the west and mostly sunny skies. We had a couple rain showers that passed through quickly. Tides were low in the morning and incoming in the afternoon for majority of the week. 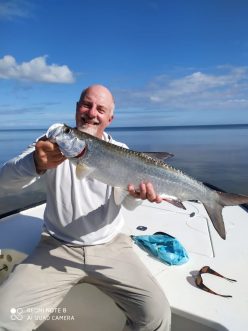 Chef Carlos continues to impress guests with his excellent dishes accented with a Mayan flair. His unwavering enthusiasm in the kitchen for the season has been impeccable. Emmanuel and the house staff worked really hard to smoothly execute daily duties and provide a seamless and clean environment.

I sat last night at dinner in the company of four guests who have all frequented ESB Lodge over the last 4 seasons. This is our last week of the 2020 season and I couldn’t be happier to sit amongst close friends and enjoy our conclusive week. We have some mixed weather in store for us and an hour before writing this report Hurricane Iota has become a category 5 storm that will hit the northern portion of Nicaragua around 1:00 AM Tuesday. This will bring changes to our weather patterns and the only thing to do is to stay prepared and adjust accordingly. I feel for the people of Nicaragua and Honduras as they continue to writhe in devastation from recent Hurricane Eta. It’s been a bumpy storm season in the Caribe this year. 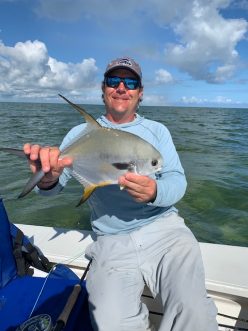 I hope everyone is having a safe November and anticipating the holiday season around the corner. Do yourself a favor and call our friends at The Fly Shop® to inquire about this special place or any other destination you wish to visit in the future. Please enjoy the week and or course, stay tuned for our latest report.