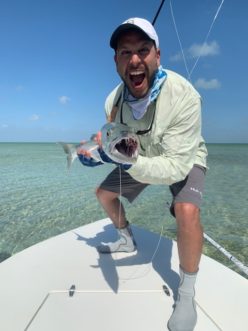 We’ve wrapped another a fun week here at ESB Lodge thus concluding our 8th week of the 2021 season. We had had the pleasure of seeing returning guests Joe Checchio, Dr. Leonard Checchio, and Dr. Christopher Daly. Dr. Leonard was able to celebrate his birthday with us last Tuesday and we shall hold off with mentioning any age. Four new guests joined us for their first-time fishing Espiritu Santo Bay and I was happy to hear at the end of the week inquiries about a possible return from the new group.

FISHING:
We have dived headfirst into spring here and the all the apparent signs have become noticeable. My dogs stare longingly up at bird nests as we welcome another generation of shrieks and cries from newborn chicks. In the unfortunate event one ventures to close to the edge and tumbles down it will find itself inside the cavernous mouth of my Weimaraner and whisked off to a place unbeknownst to us. With all the freshness of budding flora and new fauna we also welcome a less desirable characteristic of spring, WIND. It was a classic early spring week with very strong winds from the east and southeast. It felt as though Mother Nature was doing its best to scrape away any remnants of the winter months. It’s typically windy in the Caribbean for March and April and we begin to feel the warmer winds blow hard. The days become longer with more optimal light for anglers as well as the water temps warming up. 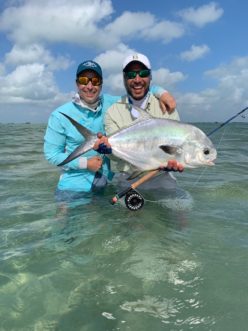 We had nothing unusual or out of the ordinary for our week fishing, it was simply solid, with all guests able to land bucket list fish, experience a new place, and have a classic week here at the lodge. The eastern winds made a couple of our river systems tough to fish on the north side and big waves prohibited guides crossing the bay a couple days. We are settling on fishing the southern shoreline, seeking good protection all the way to the far western reaches of bay.  When we had a slight lull with the winds, the river systems were full of bonefish and provided some shots at a few tarpon and snook. We saw tides trying to drop in the afternoon which proved difficult with a wind that stacked against a tide that normally doesn’t fluctuate more than a foot. Tarpon and snook reside deep in flooded cover not willing to leave their protected domain. Guests ask me when do more tarpon and snook show up and in all honesty our fishery is chocked full of them, but they become difficult to chase in flooded mangroves. A couple of spots located in our red lagoon system, close to Punta Herrero held a couple small schools of tarpon and guide Victor ventured deep into the bay to the far reaches of river 5 to find more. I love river 5, it’s otherworldly with a wide boca and ending deep in the jungle that becomes almost a canopy of mangroves. This leaves clients trying all manner of experimental casts in an attempt to present a fly. If you think punching casts up to 70 feet is difficult, try to get a fly to a snook that’s 15 feet in front of the boat staring at you, as you negotiate a five-foot opening with a nine-foot rod. Prehistoric squawks come from the mangroves as nesting tiger herons voice their displeasure of being disturbed with tarpon toads and EP baitfish being accidently lodged in the branches, a little too close for comfort. 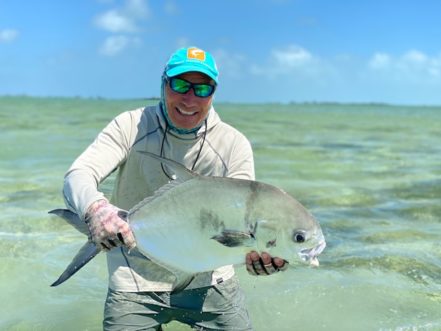 My close friend recently got married last October and his father-in-law was fortunate to join us for the week along with good friend Doug Jackson. There was a slight pressure I placed on myself and we hoped we could execute a fun week for the two with catching plenty of fish.  Doug Jackson along with another guest Lance Baldo had never experienced true flats fishing in saltwater and everyday provided them with new species landed on fly. All manner of snappers, cudas, and hordes of bonefish really shows us the strength of our fishery for all levels of anglers. This is an incredibly pristine environment and one of the last of its kind. When conditions are favorable, we had everything working for us and there was no end what someone could catch.

Our permit fishing was decent, and this again was conducive to conditions. We saw them scattered throughout the southern shoreline with days where we saw singles, and doubles that were following rays. There were not large schools of fish seen as the turbulent water pushed them to deeper depths. All of 7 of our guests were able to land permit for the week and two guests landed their first.  Joe Checchio had an awesome first day with guide Victor fishing single and was able to land two beautiful fish, one of them a personal best a little over 15 lbs.  Joe was also able to head out with guide Marcos last Thursday and landed his first grand slam.  Dr. Leonard went out with his brother on his birthday and was also able to get himself a wonderful present with a permit. My close friend’s father in law- Jim Liebhart had landed a small permit previously on another trip to Belize and he was able to get out with guide Alex and land an awesome fish shy of 15 lbs. another personal best. First time anglers Lance Baldo as well as Doug Jackson also landed their first permit. Jim Liebhart enlightened his fishing partner of the amount of money, time, and trips one might endure before landing a permit. Doug calmly replied that perhaps one might be taking the trips to the wrong destination. Sean Boutros had a good week with us and was relieved to enjoy 6 days of fishing hard with his friend and share his obsession of plying flats with a fly rod. I won’t dive into all the details, but Sean hooked a couple permit throughout the week that broke off for reasons that didn’t come to light until some wine loosened pent up excuses at the dinner table. It never seizes to amaze me the inconceivable number of ways one goes about missing, losing, breaking, and unsuccessfully landing permit.  It’s part of the game and we have or will struggle with this in our careers of chasing these fish.  The last day Sean promptly informed guide Victor this is the last day and he has yet to land a permit for the week, despite two brand new anglers landing theirs, along with the rest of the group. Lance was Sean’s boat mate; I loaded some extra boat beers for Lance to enjoy as we concluded that pretty much all the bow time would be dedicated to a permit for Sean. I was there in Punta Herrero at 5:00 PM to get guests the last day. All the boats came in, the same time promptly at 5 except Sean, Lance, and Victor. 10 minutes later we heard them before we saw them coming through the mangrove channel to the launch. Sean was able to finally get his permit, much to the relief of his boat partner and guide. Victor did a great job working hard and kept them on fish and was able to connect. With the windy conditions that we are having we like to throw out the anchor and chase permit in shallow water to get guests closer to the fish and this helps aid with limiting the need for long range casts. The story was told (only a few times) of how Victor spotted some permit, decided to not immediately voice his discovery, and quietly slipped the anchor out and pulled an extra rod out the boat. Sean and Lance didn’t really think much of it and asked Victor what he was doing. The guide replied nonchalantly “not much” and the two guests carried on whatever deep conversation was being had. Victor then mentioned he was posting up on some incoming permit and suggested Sean get in the water. Slight pandemonium followed as guide and guest got in position, executed the cast, and 20 minutes later had a permit by the tail for a great picture. A job very well done by all! 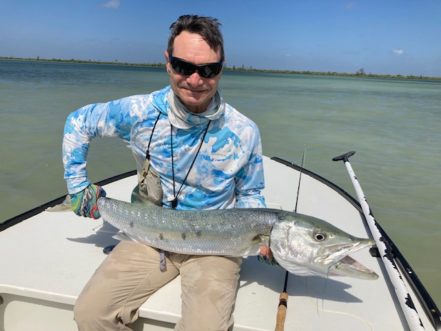 Collectively the group of 7 landed 9 permit for the week and this brings our season totals to 115 landed permit with 54 guests.

FLIES:
Almost all of our permit were landed for the week on a variation of a Casa Blanca raghead on a #2 hook. Color of the crab was tan with mottled legs. We also landed permit on the same fly with yellow eyes. A smaller permit was landed on a large bonefish gotcha.

The few tarpon and snook that were landed succumbed to Black/purple, Red/black, and Chartreuse/white toads and EP baitfish. 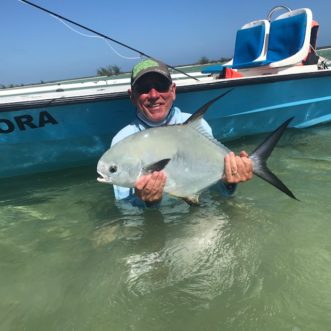 WEATHER/TIDES:
We had good sun for much of the week with strong winds 20 – 25 mph from the east.  The tdie was high in the morning and attempting to drop in the afternoon with a partial fall.

Chef Carlos and the kitchen crew did a wonderful job of cooking up delicious cuisine for guests to enjoy. Our house staff worked hard to keep the lodge running in an orderly and comfortable fashion. 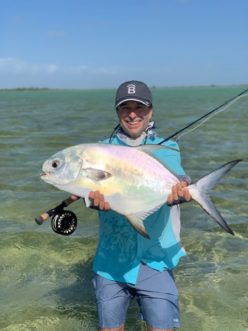 We have a fun week lined up for us here, and 6 of the 7 guests were able to take advantage of previous cancellations that enabled them the opportunity to come down. There are some high expectations from the group as we were informed that 5 of the 7 guests are hoping to have a chance to land their first permit on fly. Pressure is on for the lodge and I’m confident our guides will work hard to make the dreams become a reality. Our weather looks solid for the week with decent sun and winds dropping roughly 10 mph less than last week. 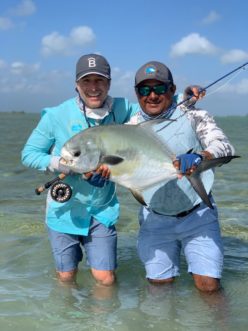 If you are reading this newsletter and would like to have more info about this wonderful place, please shoot our friends at The Fly Shop® a call (800) 669-3474. They are standing by to give you up to date news and info regarding the “happenings” of ESB Lodge as well as any other destination you might be interested in.  I hope everyone has a safe and wonderful first week of spring.  Please get outside if you can and of course, stay tuned for the next report. 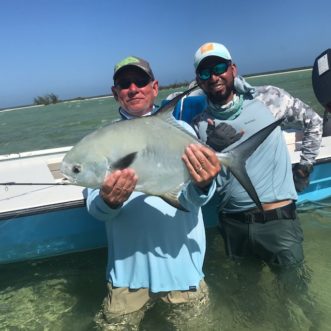 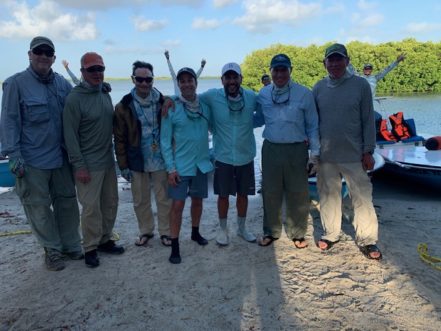