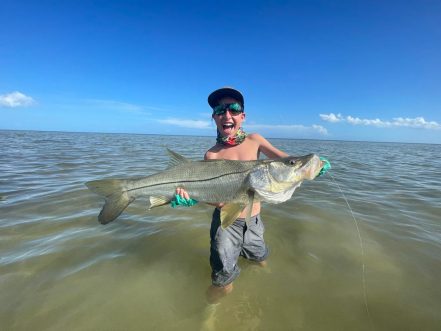 Another great week was had here on the Riviera.  ESB lodge had the pleasure of hosting a group of returning guests that usually make an annual spring and fall trip.  We also had the pleasure of adding newcomers Fred Barth and Devin Herzog to our operation.  Fred Barth was joined by close friend Dave O’Leary who we will be seeing again shortly this upcoming February 2023.  Hard to believe we’re looking ahead to the next season already.  Austin Herzog and his father Peter fished Paradise lodge many moons ago when I made my first trip to this neck of the woods.  This coincidentally is how Chiara and I first met in 2014 and wow the years have zipped by.  Austin had Devin, his 11-year-old son join us for his first saltwater fly fishing trip.  We’re always a little apprehensive having younger guests here but I couldn’t be prouder of Devin.  He is ultra-cool, sophisticated, and more intuitive than some guests we have here who are decades older.  It was a special week for the father son duo, and I reflected on the years of my own fishing trips I shared with my father.  Still to this day my favorite person who I enjoy fishing with is my dad.  There’s an unbreakable bond that cements itself and creates a foundation you carry with you throughout your fishing career from these initial trips.  Dr. Kean Oh joined us again and dazzled us with more beautiful watercolor paintings of fish he caught on previous trips here.  Kean is one of the nicest, most relaxed guys you can meet and I’m happy to call him a friend that hails from my hometown Traverse City, Michigan.  We had Joe Checchio and Bill Ingram join us for their umpteenth trip here.  These are names you’ve started to recognize over the seasons with regularity as they have become staple friends of the ESB tribe of diehard anglers. 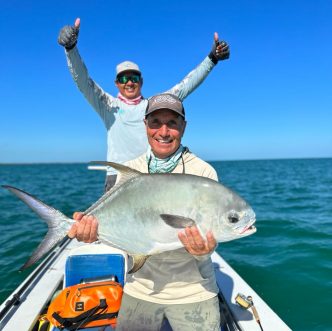 The fun group of seven had a pleasant week and unbeatable weather that every flats angler dies to have for 6 days of fishing.  Plenty of food, great company, Devin’s wisdom, and some unbeatable moments on the flats is how I’d sum last week.

FISHING:
The diversity of the bay is the mantra I bore everyone with when I describe our fishery.  Multiple shots and opportunities at all four of our focal species is the beauty of this place.  Some weeks one species is more prevalent than others and it keeps an even keel of fishing action if the weather is good.  I have been moaning and complaining about our snook fishing the last few weeks and I was baffled with the absence of these awesome fish.  We weren’t seeing them; small runs gave a false hope of the normal fall fishery we have for snook.  This place is one, if not the best place to target big snook.  They run in the fall coming from deeper water, mingle with our resident fish and can create a lights-out day on the boat.  They showed up in the bay and it seems they are here to stay.  A little later than previous seasons but we’re in it now and last week was truly an epic week of chasing snook.  I think they outshined all of our other species and I was glad to see them finally take center stage.  Everyone caught snook and everyone caught BIG snook.  We landed multiple fish over 15 pounds and some you could say push the 25-pound mark.  World class trophy snook kept pouring into the system.  Snook can be a funny fish.  Eight fly changes later the same snook can still be staring at you from beneath its mangrove lair.  It’s exasperating to say this least and my only suggestion is to accept defeat and go find another fish to chase.  These fish were aggressive for the most part and eager to hit a plethora of different baitfish patterns and even some larger shrimp.  The later of the two fly choices is a sleeper of a pattern to throw to snook and it works wonders to the point where I think we need to open another door of tying possibilities at the vise. 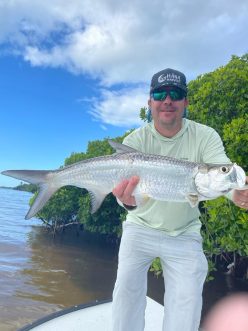 River systems 1 – 4 were loaded with snook.  Outside the bay wrapping along the northern shoreline had plenty of fish.  The small fishing village north, Maria Alena had snook and reversing back to the southside off our light house point to Punta Herrera had plenty of big snook.  We had snook/tarpon in the little Ensenada north of the lodge roughly 1 mile.  I may or may not have run up there a couple hours one morning after dropping guests off and landed 3….  Personal best snook were caught by Dave, Kean, Austin, and Devin.  Devin is completely ruined in my opinion by hanging a 25 snook with his dad.  It just doesn’t get any better.  We were loaded down with 40-60 lb. and set to battle these fish out of mangroves.  A fly line got ruined due to a stubborn snook ripping the plastic through the root balls.  I know we only have one more week left of the season but I’m beyond ecstatic to see these fish finally show up and I’m sure this upcoming week will see a similar pattern the last group of seven enjoyed. 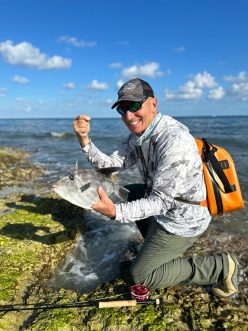 Tarpon were around much more than we are used to seeing in the fall.  Plenty of shots, and plenty of tarpon were landed by everyone.  The usual goes – hooked/jumped 6 landed 3.  The outside shoreline along the northern coast had plenty of tarpon and they were mingled with snook.  Sometimes fishing dirty water, you didn’t know what was going to eat your fly.  The tarpon, like the snook are following massive schools of baitfish that run with north winds.  It’s a mixed weight class with the smallest baitfish being 1 ½ inches up to 3-4 inches.  It’s like throwing jumper cables on the fishery when this surplus of food shows up and completely changes the dynamic of the fishery.  Sunken boat lagoon held plenty of tarpon and with a lower tide you had an afternoon of nothing but rolling tarpon.  Some boats claimed to see almost a hundred or so tarpon throughout the day.  That’s very impressive and numbers I would normally associate with summertime fishing here.  Bigger tarpon were found on the east side of Isla Cha island at the mouth of the bay and both north and south cuts held plenty of fish.  I had a wonderful last day of fishing with Kean and was able to land a small tarpon south of Punta Herrera.  Like I mentioned it’s not normal seeing this push of tarpon but it’s an angler’s dream come true when the anomaly works in our favor. 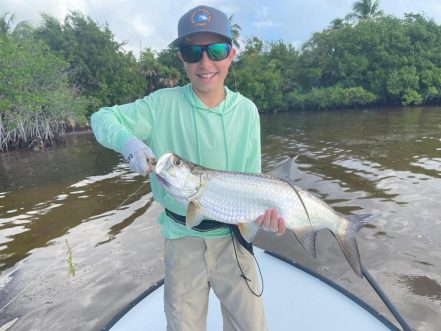 Permit took the backburner for the week which I’m fine with.  They need a break and I need a break from them.  The bay wasn’t loaded with fish but Ensenada, rivers 3 and 4, and pushes on a couple flats around Tabascanoes held the majority.  Every angler had shots throughout the week and after the normal X number of refusals we managed to land a few.  Kean got one earlier in the week, a healthy smaller fish along with his guide Jesus (name fits).  Joe landed a beauty, a close PB with guide Victor and Bill decided two LDRS was sufficient.  It can be heartbreaking, but we all have been there at one point or another.  Austin landed his personal best on the southside with guide Victor and under the careful eye of Devin.  Dave had a moment that would have broken an EKG scan.  He along with Fred, and guide Pepe later in the week worked south outside of river 4 and hooked a monster permit.  25 pound plus fish that ate a crab, tore out line, and just as quickly turned and reversed the hook from its maw.  Maddening and 5 different emotional levels flash in seconds leaving you slumped in disbelief.  There’s a throbbing pain that sits with you and you become numb.  It’s easily one of the most painful and humbling experiences you can have.  It doesn’t help when you have dear Pepe hopping up and down claiming it was one the biggest permit hooked for the season.  The flip side to all of this is it gives the three witnesses a chance to mold and fashion a tale that we may never get to the bottom of.  Dave was able to grab a rebound and settle finally for a smaller permit with less drama and he has ascended to a league of permit hounds with landing his first. 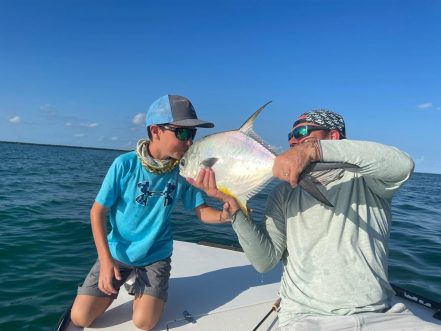 Bonefish were around in plenty of numbers and guests took full advantage chasing and catching as many bonefish as they pleased.  This group also chased cudas and everyone that pursued or had a set up ready got a chance to light up an apex predator.  Devin enjoyed reeling in a cuda that was longer than him!

FLIES:
Flies for permit for the week was a Casa Blanca Raghead in white, #2 Squimp, and a smaller ESB spawning shrimp

Tarpon and snook were landed on all manner of Dave Merritt’s ESB snook fly, Toads, EP Baitfish, laid up tarpon in tan, and other smaller baitfish imitations. 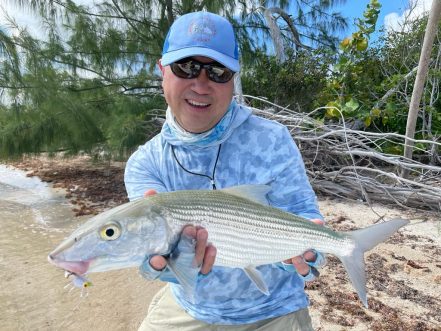 WEATHER/TIDES:
Picturesque sunrises greeted us every morning and light winds from the north.  We had a couple days where we could’ve made a day trip to Cuba with the glass conditions.  Solid visibility was aided by mostly sunny skies and periodic cloud cover.  Last Saturday a slight wind change hailed from the southeast, but it wasn’t strong enough to change tidal pushes.  The tide was lower in the morning and coming in with a fall starting midday.

Our dream team in the kitchen continued to dazzle and overfeed the crew and Emmanuel and the grounds crew cranked away on never ending projects as well as working hard to insure comfort and a functioning lodge. 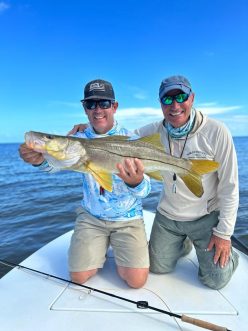 The last week of ESB’s 2022 season is here.  We have a great group of friends joining us for the closure and I’m sure it’ll be a memorable 6 days.  Weather conditions are more cloudy but lighter winds heading down from the north should keep the snook running and our guests enjoying plenty of action.  It’s been a heck of year and I’m both excited and sad to see everything come to a close.  I’m already getting emails and friends/guests that are reaching out about next year!  I am severely behind pounding a new, abbreviated, no bs 2023 travel tackle planner.  I’ll get it to everyone as soon as I can, perhaps after landing one more snook…  You’re going to want to take a peak at the new material whether you’ve been here 20 times or an excited newcomer to ESB. 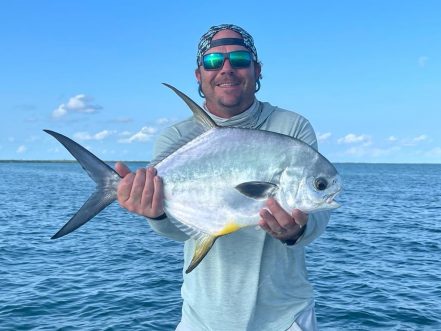 Always remember our friends over at The Fly Shop are waiting for your calls to help line up another fishing trip or to chat about the newest and greatest in the fly-fishing world.  They have consistently aided ESB and helped dial in one of my favorite fishing locations on the planet.  Go out and enjoy some fresh snow if it’s started to fall in your neck of the woods.  I’m sure leftover pumpkins from the last holiday are at their final stage, residing in their final resting place on top of a compost pile.  It’s onwards and upwards as we barrel towards the holidays.  Get outside, love one another, practice conservation, and of course stand by for our last report. 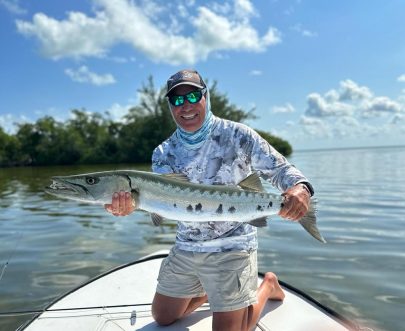