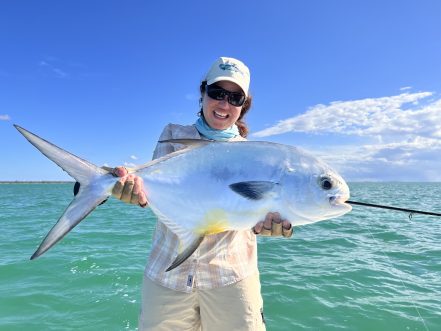 We’ve had another splendid week here on the beach.  ESB Lodge was fortunate enough to have returning host Billy Trimble for his second week of the season.  It amounts to old friends uniting under the thatch roof of our palapa, sipping various Caribbean themed beverages.  It’s fun to see us carrying on and picking up right where things left off from previous trips.  Billy’s week had in tow a crew of familiar faces, the Eatons, Ellen Travis, Koch, David Phillips, and they in turn rallied a couple of their own friends along for the ride.  Suzanne Lima and Nick Head were newcomers to ESB and as many of you know left Sunday embedded into the grain of our ESB Culture.

Like all fishing weeks there’s a constant swing of ups and downs, good and bad, enlightenment for some or just an even keel of acceptance of what’s in front of you.  We had a healthy dose of all the above and it was a comfortable, relaxed, another classic one in the books.  Fishing had its moments, and I felt everyone had a point in the week they could claim as their own, a personal highlight of varying degrees. 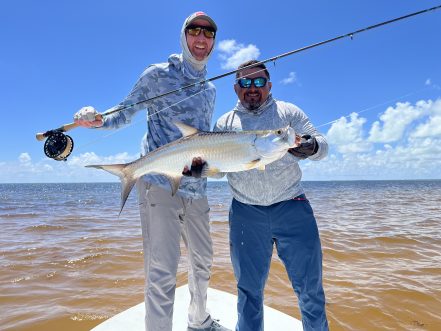 FISHING:
With decent weather the first couple days the bay had great numbers of permit on flats, deeper water, and transition zones.  Anglers had plenty of shots but getting them to commit was tough.  Rifling through crab/shrimp variations, tippet sizing, and constant head scratching led to some frustration.  Terri and Jerry hunkered down on a school of smaller permit with Fernando the first day and each landed a permit a piece.  The next couple days it became a little more forgiving and permit began to eat.  Outside 4th river on a low tide upwards hitting parallel to 2nd river held a good number of fish.  Southside and deep southwest had less fish but bigger singles feeding in shallow water.  Ellen Travis had perhaps put more time into catching a permit than most and we wholeheartedly agreed this must be her week to accomplish her angling dream on the flat.  Wednesday her and her boatmate Suzy headed out with Pepe and she saw a single permit, hit the cast, and was tight to her first permit.  Congrats to Ellen and well done on a very well-deserved permit.  Later in the day Suzy was also able to land her fist permit on the fly.  Kudos Chicas! 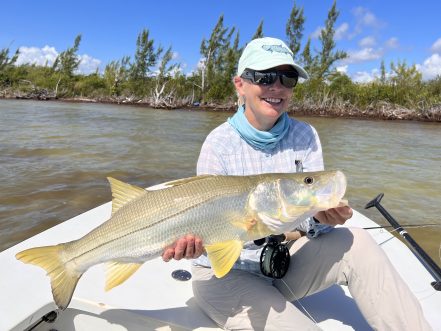 Casitas on the southside was our house school of fish for the week and most boats were focusing on them later in the day with an incoming tide.  Thursday Billy Trimble landed a nice permit and David Phillips also grabbed one out of the school with minutes to go before returning to Punta Herrero.  Chris Koch put together a slam to add his permit to for the week with guide Victor.

Our group of 8 landed 8 permit and our season total now sits at 411 permit landed with 186 guests.

I would probably hold tarpon productivity higher than permit for the week.  The bay is loaded with tarpon and we’re beginning to see our annual pargo run (snapper) and small sardines.  This translates to big schools of fish filling our rivers systems and gathering at river mouths on low tides.  Terri and Jerry focused a lot of their week tarpon fishing landed quite a few and of course jumped many more.  They had a great day with guide Jesus and jumped more than 10 tarpon.  Nick Head joined us for the week as a new angler to flats fishing in Mexico.  He found himself with guide Pepe in a school of tarpon and after a quick miscommunication of “tip down” and what Nick thought was “sit down” ended up with his first MX fish as a tarpon.  I went personally some years before I landed tarpon and for your first day out on the flats to catch tarpon you must be lucky….  It’s so much fun to see and relive those moments when each of us first stepped on the bow.  Nick went on to catch many other species before the week ended and I sincerely appreciate his enthusiasm, wonder, and willingness to try something new.  David had an interesting episode where he went tight to a 60 lb. tarpon, got some jumps, and the fish decided to join them in the boat before flopping out before anyone could register what happened.  Sky is the limit when you tie into tarpon and that’s a reason, I never tire chasing them. 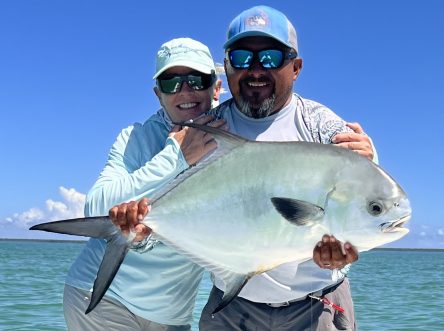 Those that wanted to catch bonefish were able to land as many as they please and every flat in the bay is holding plenty of fish.  Getting out and walking for them is a favorite for guests and I highly encourage everyone to dedicate a few hours out of their week giving it a shot.

FLIES:
Choice mosca for permit tapped out our normal offerings.  Raghead crabs in white with and without yellow eyes, Squimps got a couple smaller fish, a tan flexo was eaten, and some white and tan spawning shrimp on #4 hooks worked. 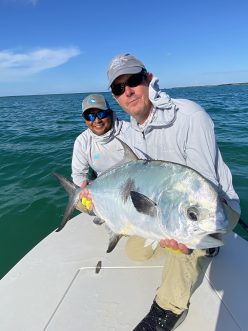 TIDES/WEATHER:
Weather for the week started out beautiful with mostly sunny skies east – southeast winds hovering around 5-8 MPH.  Friday was met with dark skies, an early rainstorm that petered on an off depending where in the bay you were fishing.  Saturday the wind picked up and anglers faced a similar as forecast as Friday.  Tides were low in the AM with a pretty significant midday slack and started coming in later in the afternoon.

Chef Luis and his sous chef Angel tore up the kitchen with more wonderful food.  I love our culinary program we have at ESB and am very proud to have the opportunity to share a special Mexican based menu with all our guests.  Freddy and Pancho held down the property and housekeeping and kept us feeling adequately taken care of and comfortable.  I’d also like to add that one of our main faces around the lodge for the last 4 years – Emmanuel (Manny) has recently become a father. His wife went into labor last Wednesday and gave birth to healthy baby boy.  Congratulations to Emmanuel, it means the world to us at ESB.  I wish him the best of luck down the path of fatherhood. 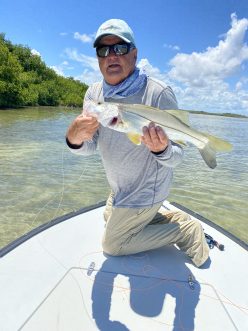 We’ve got a fun week lined up ahead of us with 7 guests.  Close friend Jim Bartschi and Theresa Van Nooten are joining us. Jim is the CEO of Scott fly rods and hands down the best rod designer/builder living today.  We’re dedicated Scott enthusiasts at ESB and I carry them around the globe fishing.  Longtime friend Jon Wheat will grace us again for his second annual trip for 2022.  A good fisherman and accomplished outdoorsman, it’s always a pleasure having him.  A native to my hometown, Dodd Russell is fishing single for the week and it’s special for me to share this place with another Traverse City friend. 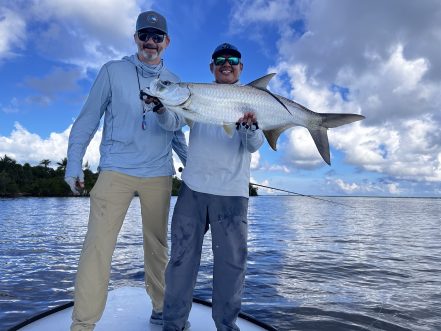 If your curious about this wonderful operation or would like the latest happenings at ESB shoot our friends over at The Fly Shop a call.  They’re standing by and ready to answer and help you with whatever your need be, or just some great guys willing to have a nice conversation with.

I hope everyone enjoys their week and finds time to enjoy a last summer day or two.  Please take care and catch us next week for the next report. 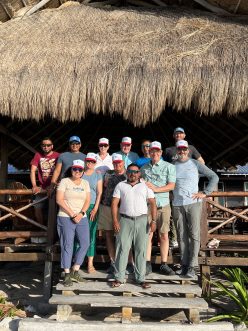