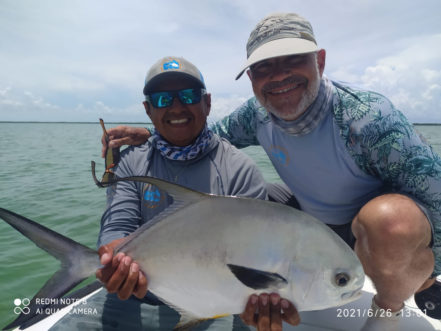 We have enjoyed ourselves here at ESB Lodge hosting another great week. A much needed break from the rough weather was welcomed from what we had experienced the week prior. Conditions improved each day as the week progressed. With that trend, anglers began to see and catch more fish throughout the week, ending with a solid number of permit. The lodge was busy with a full house of 8 anglers, including good friends Jim Montgomery and Jeff Hewitt. We enjoyed a full bar and good food after long days of fishing the bay. 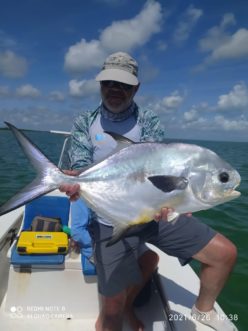 FISHING
Permit was the target most of the days for our 8 guests. The first few days of the week, we found the permit fishing to be very difficult. The weather was ok, but certainly not ideal for spotting fish. With the large amounts of rain we received the week prior, anglers found themselves fishing the southern shoreline where there was protection from the wind and less fresh water in the system. We found that it was not worth the long bumpy drive all the way to the north shoreline and then back into our river systems. Multiple inches of rainwater from last week was still making its way into the system, causing a change in salinity to push out the baitfish and crustaceans. This of course in turn means the fish that feed on these critters will relocate to other portions of the fishery. I believe we were experiencing this phenomenon in the bay as a whole. The further we got away from the big rains last week, the more fish we saw. I believe a lot of permit were pushed out of the bay with all of the freshwater, and slowly returned as conditions restored to normal. Thursday had all four boats locating solid numbers of fish on the southern shoreline in areas we call “Casita’s and Tavos Canos.” Some large schools of fish ranging in the 10 to 15 pound were found in deeper water, with some nice singles and doubles cruising the shore on an incoming tide. Jim Montgomery managed to land two of these nice schoolies on Thursday, and then two others later in the week. While we were locating large numbers of fish the last three days, the anglers and guides found them to be extremely finicky. We had fish follow out of these schools but often never commit in eating the fly, even with multiple pattern changes. Doug Leyendecker duped two fish to eat out of schools, and then wrapped the week up landing a nice single fish tailing out of shallow water. Richard Smalling joined us for his second trip after taking a few years off and was determined to catch his first permit. He fished his absolute butt off all week and after receiving multiple denials/follows, he figured he would have to wait until his next trip to knock the permit off his list. At about 4:30 in the afternoon on Saturday he and his guide spotted a trigger fish near some rocks. They saw a slight flash behind the trigger and realized there was a permit closely behind. Richard made the shot and the fish hammered the fly after one quick strip. They landed it and quickly and departed to get back to the boat launch on time.  We couldn’t be happier for Richard; congrats for catching his first permit on the fly! 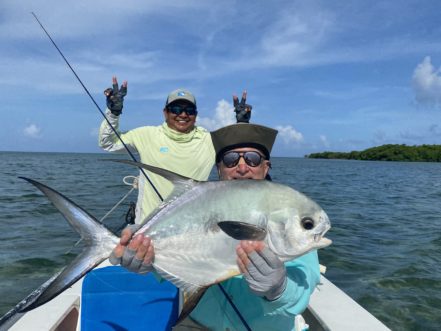 David Horn and Rodger Nye joined us for their first experience at ESB. After some solid shots and a few fish that broke off they made it happen the last few days landing 5 permit between the two of them. On Friday Rodger had a permit out of a huge school, upwards of 100 fish, eat his crab and quickly break him off at the blood knot. He rapidly got things re-tied and was back chasing the school. Guide Victor poled the boat into position and Rodger made a perfect shot. He had a fish follow and eat the fly, but unfortunately missed the set. As he retrieved the line to check the fly something felt a bit off and he realized the same fish had eaten for a second time and he somehow hooked his previous fly in the process of missing the fish. The chances of this happening out of a school of 100 fish is astronomical and just goes to show you how crazy scenarios can take place while out on the flats. With the school staying in the same location, Rodger offered to switch positions with guide Victor and pole him into position for a shot.  It took Victor one cast before he was listening to the line peeling off the reel with a hooked permit. 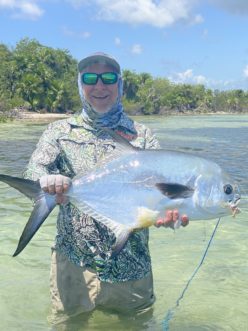 After breaking a few fish off earlier in the week, David was happy to cease the opportunity to land a few out of the schools later in the week. I couldn’t be more impressed with David and his die hard attitude towards flats fishing at 80 years old. We can all only hope that we are all still out there getting after it at his age.

Our total number of permit landed for the week was 17 with eight guests. This brings our season total to 373 permit landed with 140 guests.

While the focus was certainly permit for the week, Jeff Hewitt did find himself heading to the main entrance of the bay on Friday with guide Fernando to look for migratory tarpon. After landing a nice permit earlier in the day, they decided to take advantage of the calm conditions and attempt to complete the grand slam.  They quickly saw rolling fish and Jeff was hooked up. The fish made two big runs right away but didn’t initially jump, leading them to think it might have been a big jack. As the fish got closer to the boat it erupted and they eventually landed the 50 pound tarpon. This was the one tarpon landed for the week, but there were definitely other fish in the area.

As always, bonefish were readily available in the sandy shallow water flats. A seven or eight weight is a perfect piece of equipment when it comes to these strong, aggressive fish. 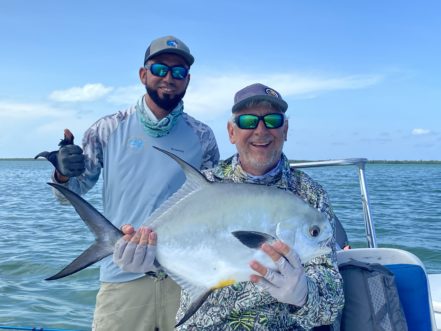 WEATHER/TIDES
Our weather was decent for the first few days, and progressively got better as the week went on. Friday was a perfect day, with full sun and a very light breeze. Tides were incoming early AM, resulting in a high late morning and a slack midday. We saw tides drop and a fall that took place early afternoon.

FLIES
A large range of flies were thrown to schools of permit, but the tan or white Raghead style crabs once again proved to be most productive. The tan crab with stripped legs slightly out-fished the white this week.  Bonefish were readily caught on small spawning shrimp, Gotchas and Squimps in size #4 – #8.

STAFF
Our staff did a wonderful job providing us with delicious Mexican dishes, and a well-kept, organized lodge.

We are excited for next week as they are the final group for the first half of the 2021 season. Many of them are longtime friends of the lodge, and have visited ESB multiple times. We will likely have a mixed bag when it comes to weather, but are hopeful for a strong end of the season. Please feel free to give The Fly Shop® a ring if you would like to enquire about a visit to this unique operation in the heart of the Yucatan.  Stay tuned for one last report before we take a few weeks off and prepare to re-open in August.  Try to stay cool with the high temperatures and enjoy some time on the water.