Another week of great fishing and wonderful company has come and gone here at Esb Lodge.  The week went fast, and we felt as if it had ended as quickly as it started.  The weather finally cooperated after many weeks of fishing through very strong winds.  We were fortunate to have some nice calm and sunny days and our return guests enjoyed being back at the lodge continuing to learn the famed waters of Espiritu Santo Bay.  We were pleased to show this operation to some new faces, and hope they will come back to see us in the future.  We had some fantastic days of permit fishing, catching great numbers and some large fish.  The kitchen staff continued to deliver wonderful Mexican cuisine with a Mayan flare to our guests, all in beautiful presentations. The house staff ensured all needs and requests were met for enjoyable accommodations at the lodge. 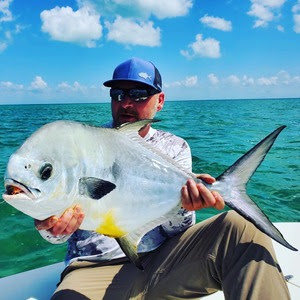 Permit was the name of the game this week.  As the sun rose on Monday morning, the anticipation was high with clear skies and the palm trees swaying with a light breeze.  Guest Hubert Parrot came to us with intention to land his first ever permit on the fly, and was able to bring to hand not only his first, but also his second on Monday.  Return permit hungry anglers Adam Melanson and Ben Rudmik landed three permit on Monday with guide Jorge.  They brought their good friends Lee Lishcka and Scott Peterson down with them this year to show them how pristine the bay is.  Lee and Scott both landed their first permit on Monday with guide Alejandro, and Scott was able to catch two more later in the week.  Return guest Rip Woodin was part of the Monday permit club, creating a total of eight permit landed on the first day of fishing.  Once Tuesday was completed it became evident that the fish would not come as easily for the rest of the week as they did on Monday.  The first day of the week was one of those days where all the stars aligned; the sun was out, the wind was calm and the fish were where they were supposed to be.  Multiple shots were taken from everyone in the group to large schools of permit in deep 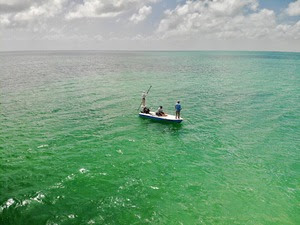 water, in addition to some awesome encounters with large singles tailing in shallow water.  Permit were also seen cruising along with stingrays again this week. Guest Todd Wolf and Greg Horridge worked extremely hard all week to catch permit, with countless encounters and follows from schooling fish.  They were starting to think they would leave the lodge without catching their first permit on the fly.  That is until the last day!  Greg and Todd set off with guide Alejandro for the second time in the week and came back with four permit landed.  Todd came across a group of three smaller permit in a school of bonefish and was able to pick them off one after another.  What an awesome encounter to be able to catch one permit, then relocate the school and continue to do it two more times.  Later that day, Greg located a single permit at the entrance of one of the backcountry river systems and landed his first ever permit.

All eight guests landed permit this week, with a cumulative number of 17.  This brings our season total to 171 permit landed with 118 guests. 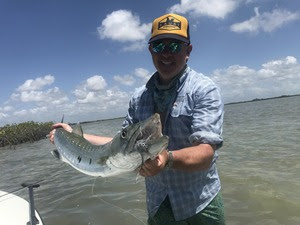 The group this week was very focused on permit, so less time was spent looking for tarpon and snook.  One tarpon was landed by guest Rip Woodin, while a couple others were jumped throughout the week.  Some large tarpon were seen rolling out in deeper water on the eastern opening of the bay while looking for permit.  A school of some very large jacks were also spotted in this same area.  If conditions allow, the guides will spend some time next week targeting large migratory tarpon in a big cut on the northern entrance of the bay.  An intermediate sinking line on a ten or eleven weight can be very useful while fishing for these larger fish in deep water. 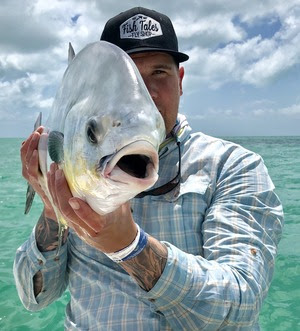 Our bonefish numbers stayed strong for the week.  Some of the group enjoyed spending a couple hours wading for these incredibly powerful fish.  Make sure to never shake off that first small bonefish as it could be a contributor to your grand slam for the day!  A couple large jacks and barracuda were also landed during the week. 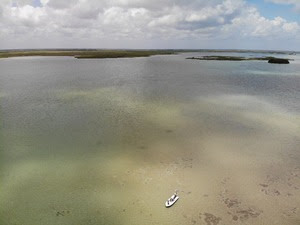 Weather was great for the most part during the week.  We had some high winds out of the northeast for a couple days later in the week, but sunny conditions continued.  We also are starting to experience more rain this time of year.  This will continue as we are entering monsoon season.  Usually these systems are small and move through fairly quickly; often times leaving calm and glassy conditions once they pass.  Tides were consistent all week, rising until mid-day and then falling all afternoon.  We are hopeful with these rainstorms that pass through we will be able to look for rolling tarpon in post-storm calm conditions. 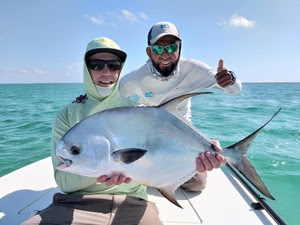 Ben Rudmik and Adam Melanson have been busy at the vise since their stay with us last year; very busy!  They came with an absolute arsenal of flies for every different species you can find here at Espiritu Santo Bay.  I was extremely impressed with the variety of creations they brought to the lodge.  A size #2 white spawning shrimp variation was responsible for most of the permit caught during the week.  The trusty #2 Tan Squimp also brought fish to the boat.  A black/purple baitfish pattern tied with a “dragon tail” was the go to for the landed and jumped tarpon.  Bonefish happily ate most shrimp flies in a size #4 – #8.  We even had a couple bonefish eat our tarpon flies tied on 60 pound tippet!

Chef Felipe continued to impress guests with high level cuisine and delicious deserts.  Our return guests were excited to eat the appetizers and dishes they had remembered from last year, and also try out the new ones the kitchen has come up with since.  Emmanuel and the house staff continued to ensure everything at the lodge was in working order 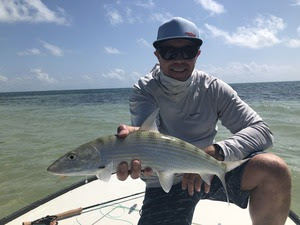 We are looking forward to the upcoming week with some familiar, and some new faces around the lodge.  Angler Mike Scott will be returning to the lodge for the third time, bring his son Mike with him.  We are excited to show Mike what all his father has told him about this place.  Guest Fred McCollum will also be joining us for his third time at the lodge.  I was fortunate enough to fish with Fred during my season guiding in down in northern Chilean Patagonia.  The Yucatan is a bit different setting since the last time we saw each other!

Make sure to stop in or give a shout to our friends at The Fly Shop® for more information about this wonderful operation.  We love making new friends down here and enjoy showing this grand slam fishery to everyone we can.

We hope that you have a great week of friends, family and fishing.  Make sure to stay tuned for next week’s report!