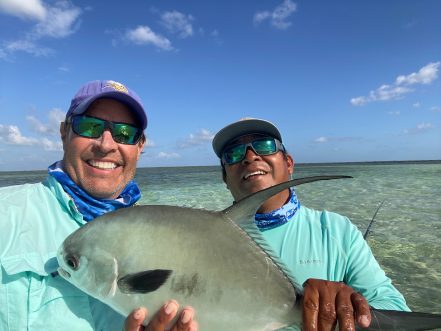 We had a fun week last week here at ESB Lodge hosting 5 guests.  Three returning guests opted to fish their days solo and put time into chasing permit.  It was great to see Mike Matus, Rich Kracum, and Jon Wheat on their annual winter trip here.  Rodger Nye joined us, and it was pleasure to meet him for his second trip to ESB and he brought saltwater guru Dave Lattimore along for his first trip to our operation.  Dave and I hit it off quickly both spending time growing up in Northern Michigan and reminiscing about the Upper Peninsula, a wonderful part of the world.  We both laughed at his current residence on the Madison River in Montana.  I’ve spent plenty of time staying at the Slide Inn and fishing across the river at Dave’s doorstep.  It’s indeed a small world and so wonderful how fly fishing takes you to special places and the connections you may already have with your fellow fishermen or women.  The group of five fished hard, endured some less-than-ideal conditions and were able to poke a fish or two along the way.  Mike Matus was also very gracious in letting me join him for the last day of the week and I had blast being able to set aside some projects and chase permit.

FISHING:
The report will be short and sweet.  The group targeted permit only for the week.  Weather conditions were extremely tough, and we accomplished checking all the boxes of terrible weather traits one could possibly have minus a hurricane.  Ripping wind 6 days straight out of the east, very high tides, and a thick blanket of cloud cover was what we worked with for the most part.  We had some small pockets of visibility with the sun, and everyone made do with what was in front of them.  I admired the consistency and demeanor of our anglers.  All these guys know the drill and also know very well you only can make the best of what you have in front of you.  Enthusiasm, and dedication trumped a bleak outlook and I salute the guides for their endless hard work.  You want to know what’s more difficult than seeing no fish for the day?  Guiding in tough conditions with zero results is unsettling and very taxing for a guide.  I truly have incredible respect for my guides and their dedication to putting anglers on fish. 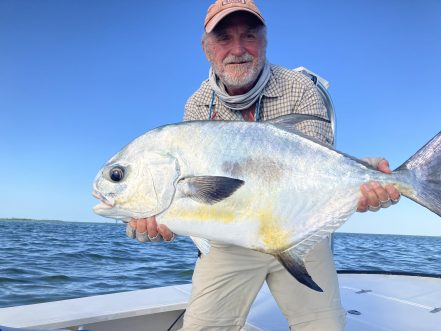 Despite my negativity we landed fish and did a hell of a job considering.  When the weather gets rough a lot of permit head to deeper water, and we miss out on seeing big schools.  Hard east winds never truly allowed a proper fall in the tides which is crucial for all the fish in bay, and it can make water movement minimal.  When you have less moving water, less fish travel and stage in areas we normally see good numbers.  The southside was our stronghold starting at Red lagoon working west along the south bank into flats we know as Casitas, Red Buoy, Flamingo, and Tabasquenos.  Some fish were seen in deeper water but that was quite a circus act of balancing, casting, and trying to hear guide commands with a 20 – 30 mph headwind.  We fished the north side in Ensenada, a well-known permit flat and found a good number of fish in semi clear water.  I wished we could’ve spent more time over there put hard winds prevented us from crossing and for safety reasons we don’t push it.  Mike Matus was off to a bang for the week starting his Monday getting two permit with Alex.  Rodger Nye was able to land a smaller fish with Marcos.  Rich Kracum later in the week landed 3 permit with Alex.  Middle of the week we had a couple tough days where not a cast was thrown.  Keep in mind we were chasing permit. 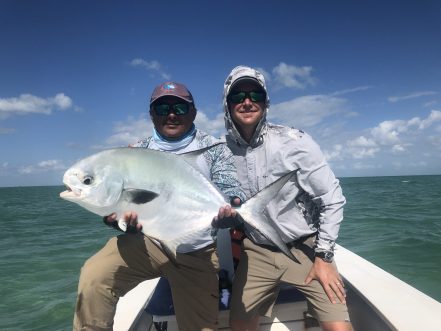 I will take minute a minute to brag on Jon Wheat.  I know if he reads this, he’ll hate that I do it, but I must say I deeply admire and respect the 82 year young friend of ours.  He’s an accomplished outdoorsman, a solid fisherman, and a lover of cigars and scotch.  He’s someone I look up to and I really cherish his two weeks he spends here at the lodge.  He does a winter and early fall trip.  He got his butt kicked along with the rest of the group but was able to finish his week out with landing 9 permit total.  He got a few fish with Alex and Nando on Wednesday and Thursday.  We talked a minute in our palapa after he had a day where he saw fish, got flies in front of them but couldn’t get one to commit on his fly.  We normally use shorter leaders in the 20 pound class for the majority of our permit fishing here.  Sometimes I feel that it’s just too heavy and despite having hard winds the need for a longer section of 16 pound Fluorocarbon becomes necessary.  This is truly how I chase permit 100% of the time.  Jon tried it and it worked.  I under no circumstances would dare take credit but I think it helped him out with a few other stars aligning as well.  Our last day we had solid sun with some clouds that moved in the afternoon.  Mike and I headed out with Pepe and we poled about 20 minutes based on my suggestion (bad idea) on the west side of the island we see at the mouth of the bay.  Pepe entertained his boss, and then politely suggested we head to red buoy and work west.  I agreed and clearly my original idea wasn’t panning out.  We began working the shore roughly 100 yards off and poled west.  Singles and a couple doubles started popping up and we had a busy morning seeing plenty of fish.  I loved the balance and consistency of spotted fish.  The timing intervals worked well, and a few hours flew by quickly.  Mike had an awesome fish that didn’t cooperate despite working behind a ray.  All diehard permit fisherman knows this is a very good chance and there’s no question the permit was feeding.  I had a nice one cross me and unfortunately slipped up wind of us.  We turned the boat into the wind’s teeth, and I was luckily able to get a cast that resulted in a very familiar heart pumping follow from the fish and was rewarded with an awesome refusal.  That’s right an awesome refusal!  It’s still amazing getting those follows despite not having an eat.  Most of the time I am just relieved my cast was rewarded by a follow.  I was using a spawning shrimp which was replaced quickly with a crab.  Couple minutes later we had another one move across some sand and rocks into range and one cast, one strip, and I was hooked up.  Pepe tailed the fish 10 minutes later and I was holding a beautiful fish over 10 pounds.  We periodically saw Jon fishing some of the flats as us but closer to shore in the afternoon.  We all wondered how their day was shaping up as we were happy to see as many fish as we had. 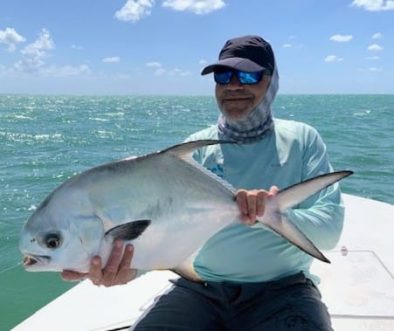 Everyone had great shots that last day and it was easily the most productive day of the week.  Jon along with Alex landed 6 permit.  None of them were in big schools, instead, singles, doubles, and a push of 5 or so fish.  His smallest was 10 pounds, and he also landed his largest fish to date a healthy permit over 20 pounds.  I thought it was great and I couldn’t be happier with Jon and Alex, they deserved it and it’s a very special day I’m sure won’t be forgotten.

The group of 5 anglers collectively landed 17 permit with the addition of my one which brings the season total to 27 guests and 48 permit.  A very strong first month of fishing here at ESB!

WEATHER/TIDES:
Weather for the week was hard winds from the east at 20 plus mph and heavy cloud cover.  We had more sunshine as the week went along with Saturday being partly sunny.  Tides were high for the most part and we never hit a true low.

FLIES:
Permit were mainly caught on Casa Blanca Ragheads in tan and white as well as our ESB crabs in either tan or white.  We also landed a couple smaller fish on a Squimp!  I love this old classic of ours and you can never forget the Squimp.

Carlos and the kitchen crew served us wonderful food for the week and all the meals were immensely enjoyed.  Emmanuel and the grounds crew worked hard to ensure the accommodations all functioned without a glitch and maintained a pleasant level of comfort for guests.

We’ve got a busy week ahead of us and a highly anticipated group that has been making the annual trip to ESB since 2017.  The Fly Shop’s own Justin Miller is with us with a wonderful group of what I call close friends.  When I reflect through the seasons this is always a fun week for us and I truly love the group.  I heard someone from the group it felt like going home when they got to ESB.  This means so much for Chiara and I and it’s friends like this that justify why we do what we do in this special corner of the jungle.

The sun is shining and it’s a beautiful Monday afternoon here at the lodge.  Triggerfish are lazily tailing in front of my office now and I hope it’s as beautiful wherever you may find yourself this last day of February.  If you have any questions or want to check in, please drop a line to our friends over at The Fly Shop.

I hope everyone has a great week and please check in for the next report. 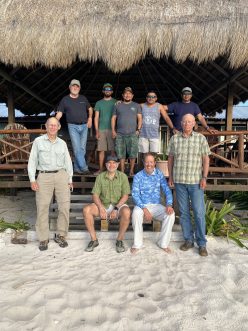