It is hard to believe that we only have four more weeks left of the first half of the season here at Espiritu Santo Bay Lodge. Another seven days has flown by as we quickly approach the summer months. We enjoyed having a full house this week, with eight anglers total. A mixed bag of new and return guests provided enjoyable conversation and ample tales of countless species caught all around the globe.  The weather was decent, with a range of sun, wind and rain. The permit were a bit difficult to lure into taking the fly, but we still managed to end the week with solid numbers. 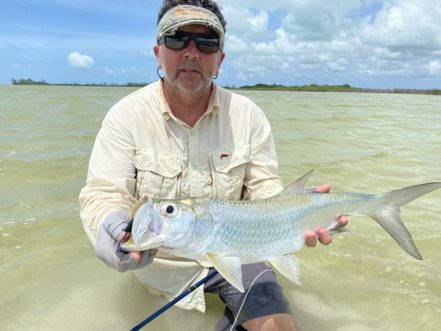 FISHING
With a range of weather (which is to be expected this time of year) I would say we had a decent week of fishing. While the afternoons were less productive in finding fish on the flats, the mornings had guests receiving solid numbers of shots at permit. We experienced a lot of fish turning down the fly after following all the way to the boat. With a variety of flies thrown throughout the week, it is hard to say why we had such a high number of refusals. Guests had to work a bit harder than normal to ensure the presentation and retrieve were absolutely perfect. We were excited to have Steve Dryer join us for his third trip to ESB Lodge. Having yet to land a permit on a fly rod, it was obvious what Steve’s goal was for the week. Steve headed out on day one with guide Fernando to attempt to finally land one of these bucket list fish. It wasn’t long before Fernando had a fish spotted and the hunt was on. With a perfect placement and instructions from the guide, Steve managed to deceive a nice fish into eating his slowly stripped white crab. Congrats to Steve on landing his first ever on a fly rod.  He reunited with Fernando later in the week and succeeded in landing a second, equally beautiful fish. For people that have spent many days pursuing their first permit on a fly, they can understand the relief and excitement Steve felt upon handling these fish. Dick Meyer returned for his second trip this week, bringing son Daniel along for the ride. During Dick’s last visit, he was extremely fortunate to experience a week of permit fishing full of huge schools of aggressive fish – big aggressive fish. While the permit were much tougher to deceive this week, Daniel and Dick had a very productive first day on the bay. They spent the day hunting the shallow light colored bottom flats of the southern shoreline in an area called “tavos canos” with guide Alex. Dick was pleased to take part of his sons first permit to hand on the fly rod. After they swapped out and Dick landed a nice fish himself, Daniel hopped back up onto the bow and made a fantastic presentation to a second fish. With two fish to hand on his first day of permit fishing, Daniel was ecstatic with what Espiritu Santo Bay had provided.  He finished the week with 4 fish total; a very impressive feat for your first trip chasing permit. Scott Sanderson had a very interesting/entertaining event occur that is worthy of noting on Wednesday while out with guide Alex. After hooking into a nice sized permit, the crew was filled with excitement as they figured the hard part was over and they were well on their way to the hero shot. There was a lot more work to be done of course, as the fish made a massive first run that took Scott well into his backing. Right as the fish barely slowed for a second well over 100 yards away, Scott’s backing snapped in half. The frayed end of the backing managed to wrap around his third guide for just long enough to enable Scott to grab it. Guide Alex quickly hopped off the platform and ran to the bow to assist in the ensuing chaos. Dan Appling helped Scott re-thread the backing through the rod while Alex hand lined the permit and tied a quick knot all at the same time. Pressure was regained on the fish and after a few more explosive runs Scott landed the permit.  What a story to tell and I’m sure Scott will remember that fish for many years to come.  Gordon McHaney returned to ESB Lodge for another week of permit fishing. Gordon has fished many different saltwater operations, and we are always honored to see him return to our little lodge out here in the middle of the jungle. After a large fish was lost to an unfortunate hook malfunction, I figured Gordon was a great candidate to be the guinea pig for my personal take on the infamous white, yellow eyed crab.  With a sturdy hook and an excellent presentation, it wasn’t long before he was landing his third fish for the week. 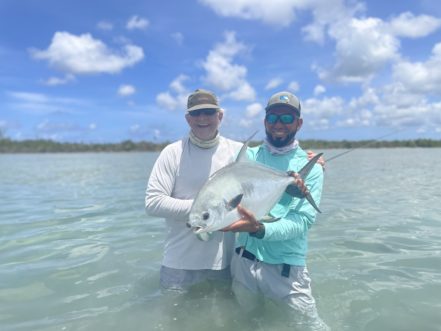 Collectively the group of 8 anglers landed 13 permit for the week.  This brings our season total to 350 permit landed with 120 guests.

While the focus for the week was mostly on permit, six out of eight guests landed at least one tarpon. These fish were caught either back in the third river system, or a small tarpon hole close to the boat launch in an area called “Red Lagoon.” Bonefish always provided a nice bend in the rod when the permit fishing became tough. It is noteworthy when someone enjoys a few hours wading in skinny water for bonefish. Daniel Meyer had a great time taking it upon himself to head off solo for a few hours one day and lay into multiple powerful and aggressive bonefish. We always rave about the bonefish we have here, and at least a few hours of one of your days should be dedicated to catching them. 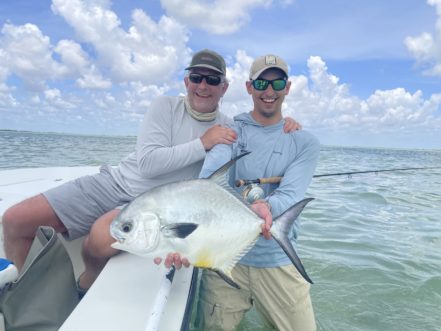 FLIES
Crab patterns once again dominated our fly selection for permit this week. White Casa Blanca style ragheads with yellow eyes made their weekly appearance on the rods of most anglers. It is advised to be well stocked with this pattern if you are making a trip to ESB in the near future. Tan crabs as well as white crabs without yellow eyes were also responsible for a portion of fish caught this week. 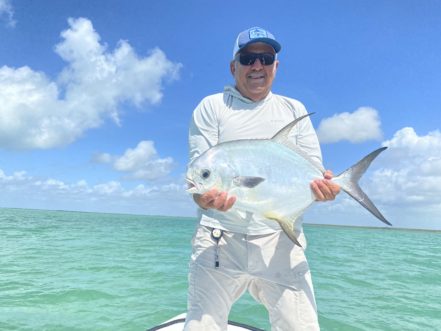 Classic color combinations were productive for tarpon. Black/Purple tarpon toads and EP style baitfish worked well, especially in areas where the water was a bit off colored.

Bonefish readily ate shrimp patterns in size #4 – #8, as well as some of the larger crab patterns for permit.

WEATHER/TIDES
All-in-all I would say we had good weather this past week. While anglers found themselves struggling with visibility due to cloud cover a few in the afternoons, the sun was out for the majority of the time. The southeast wind was minimal for the first few days, and picked up to its normal 10 – 15 mph later in the week. With a tide falling out for most of the morning, we found permit fishing to be most productive during this time frame. Mid-day we experienced a slack tide, and then watched it rise for the rest of the afternoon.

Chef Carlos continued to keep the entire operation well fed and happy, while serving delicious Mexican dishes to our guests. The clients are always impressed with the flavors he uses and how consistent his cooking is. Exquisite dinners and decadent deserts are often the highlight of the evening.  The rest of the kitchen and house staff worked tirelessly to ensure guests had an enjoyable stay and all their requests were met.Cleanliness is of the utmost importance, and the staff guarantees the accommodations are well maintained and comfortable. 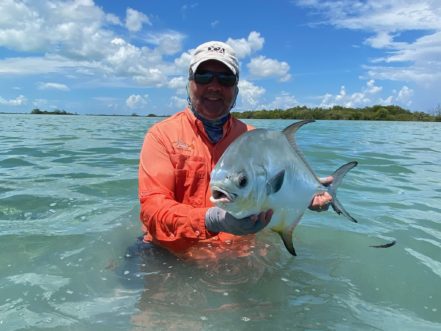 We are looking forward to next week’s group of eight anglers as we come into the last few weeks of the season. Keith Smith is a great friend of the lodge, and we are always excited to have him and his company return. Gustavo Hlebaum will be joining us again after missing his trip last year. Gustavo runs an incredible trout and golden Dorado operation out of San Martin, Argentina called Andes Drifters. We are happy to have him back, as it was unsure if he and friend Matias would make until the very last second.  They have just finished their summer season in Argentina, so we are hopeful they will encounter some good fishing and decent weather.

If you are interested in enquiring about a trip to Espiritu Santo Bay Lodge, make sure to drop a line to our good friends at The Fly Shop®. They will assist in any questions or concerns you have leading up to a trip here or countless other fly fishing operations around the globe. Make sure to get outside and enjoy the summer weather. Hopefully you can cast a fly line at some point this week. Stay tuned for next week’s report!