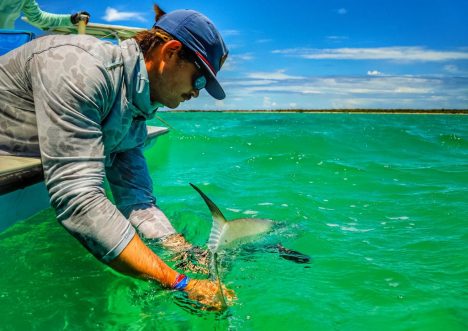 This week the weather has put the skills and experience of our guests to the test.

Much of the week has been cloudy with light winds from the east/northeast and some isolated but strong showers.

This week we were visited by Bob Sytz, Bill Clayton, Kirk Oliver, Bruce Trefz, and Jim Comer III, old acquaintances of the Lodge and for the first time Tuck Scott and John Hawthorne. 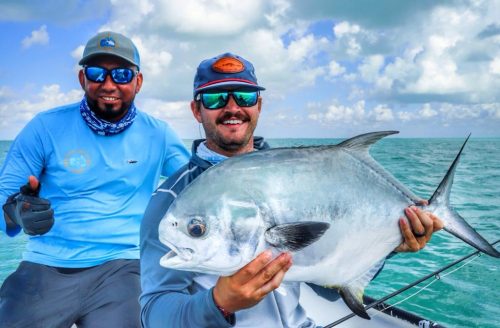 The week started somewhat slow for what we are used to, due to the dense clouds that made it difficult to see the fish.

However, it was not a big obstacle for Bob and Kirk (guided by Alex) and John (guide by Marcos Neri) to land their first permit of the week and in John’s case the first of his life!

Yes, my friends we continue with the traditional welcome ceremony to the permit club (palometa in Spanish) and John did not hesitate to finish his double shot of tequila in one go. 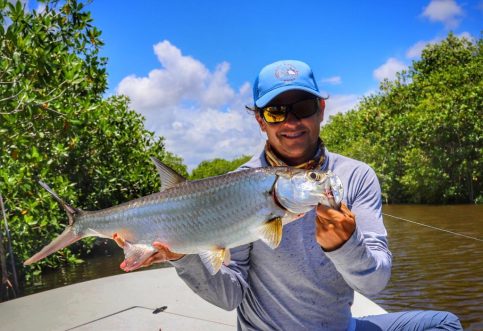 As a curious fact, I must add that he achieved his first permit with a fly that one of his friends tied for him and that they called “the John special”, cute variant of a crab mixed with shrimp with a short pink dubbing partially covered with a white.

Another fact to note is that Bob made the second Grand Slam of his life with Alex, with whom he also made the first Grand Slam in September of last year and I must add that this time he did it with the biggest Permit that he managed to land until today.

Bruce and Jim, accompanied by Fernando, really had fun fighting the elusive and strong bonefish, so strong that it cost Jim to break three rods, that shows the power of these Macabis (bonefish in Mayan language) and the tarpon, guided by Marcos Neri, that accounted for one of those three rods.

Tuck had a dream day with Fernando, stalking tarpon among the mangroves of river five. 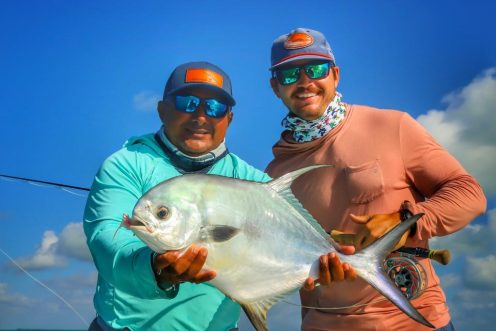 The emotions and celebrations continued with the Super Grand Slam and the Grand Slam that John and Tuck achieved together with Alex, that is, they managed to land two permits, two bonefish, two tarpon and a snook, but if we count that they also captured two, John took his Super Grand Slam to another level, “super-duper trooper, white wolf, silverback Grand Slam”!

Kirk, accompanied by Alex, found a Permit that, evidently, read the book “how to fish Permit” and followed the instructions step by step on how to act and ended up giving him an unforgettable experience.

Closing the week on the last day of fishing, John landed another permit, guided by Pepe making his first experience, at 28 years old, fishing this species a complete success. I will definitely continue writing about John’s exploits in the future.

We close the week with a total of 6 permits with 7 anglers, which brings our season numbers to 240 permits with 97 guests!

The shallow flats of Tabasqueños and Casitas with the spots to catch permit this week. 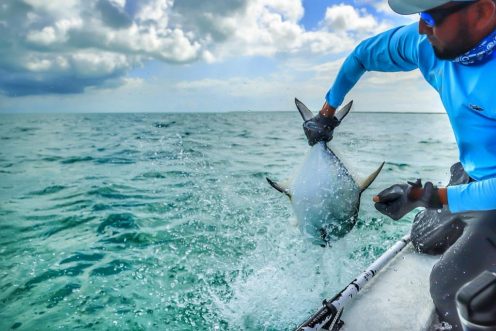 Rio Cinco continues to impress us with the amount of tarpon that use it for shelter.

Ensenada was one of the meeting places for permit this week, as our guests at dinner commented, although the numbers do not reflect the number of chances and sightings that our fishermen had. Believe me it was not for lack of effort, dedication or experience…

Weather
The first four days of the week were partially cloudy with high and low clouds that affected the visibility of our guides in the bay.

Winds remained light, between 18 and 9 mph with slight variations in direction between the east and northeast.

The tides were a little more regular, being high in the morning and low or moderate in the afternoon.

Some isolated showers came with the changes of the wind to the northeast, at times heavy here at the lodge but not in the bay, but they never lasted more than a few minutes. 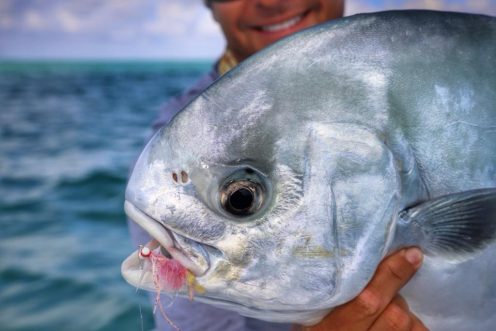 Flies
Permit, the usual Casablanca, Flexo worked well, but this week the ovations go to ” the John Special”, who has more effectiveness to show once again that fishing is not an exact science and that not everything is written, so that my reader friend, if you tie your flies, do not be afraid to innovate or let your imagination run wild, do not just tie the traditional ones that we all already know work, who says, maybe you “rediscover the gunpowder” of fishing for this elusive species.

Bonefish have not changed their diet and small shrimp and crabs (sizes #2 to #8) are the ones to go for.

Tarpon and Snook, gentlemen of EP let me tell you that their baitfish are the most effective I have seen so far, purple and black, white and chartreuse or white and red for snook are still a must to fish these waters.

Carlos, our chef took a few days off, more than deserved by the way, and the reins of the kitchen for most of the week was run by our sous-chef Luis and classifying his work as exceptional is not enough. I still fit in a size L but I think the seams on my clothes can’t hold up much more. 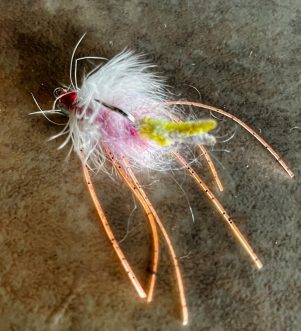 Freddy (the “silent machine”), Pancho and Emanuel continue to do their best to make our guests feel at home and, it must also be said, making my job much easier…wait a minute, sorry Dane don’t read this paragraph I’m still working very hard to make everything work!

Isabel and Carlo are much better than Google, to find everything we need for the lodge to work properly, believe me that with a jungle and a sea trying 24 hours a day and seven days a week to sabotage the lodge there are a few things that they require our attention so that everything continues to roll on rails.

I’ll wait for you next week with a new report and the adventures of our next seven guests and their exciting fishing, that’s what the ESB experience is all about, because, as my grandfather said “fishing is not just catching fish”. 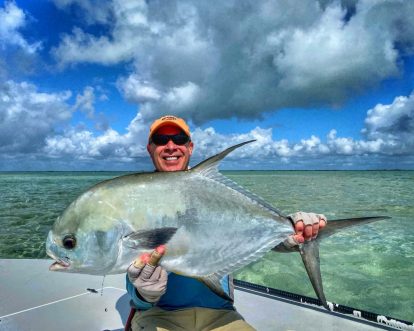 Do not hesitate to contact our friends at The Fly Shop so they can tell you first-hand what life is like in Espiritu Santo Bay, the Sian Ka’an biosphere reserve (which means “Where the sky begins”, in the language Maya)

(See you later and good luck! in Mayan language) 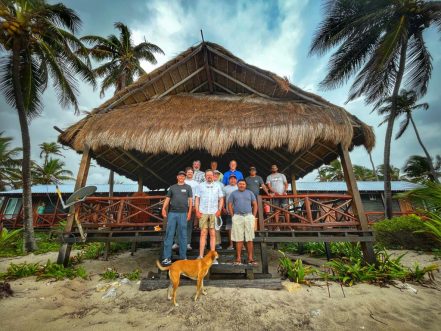