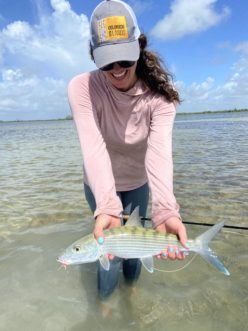 We have wrapped up another enjoyable week here at Espiritu Santo Bay Lodge. A group of six anglers joined us, including Keith Smith and friends that have been visiting the lodge for multiple years now. I am starting to really enjoy seeing more and more familiar faces at the jungle airstrip as they step off of the plane. We had a mixed bag of weather, with some good sun early that gradually deteriorated throughout the week. While we saw lots of permit and managed to land a few, the snook fishing was the real highlight for many anglers. The guides worked hard on the polling platforms, while the kitchen and house staff made sure incredible meal and comfortable accommodations were enjoyed upon return to the lodge. 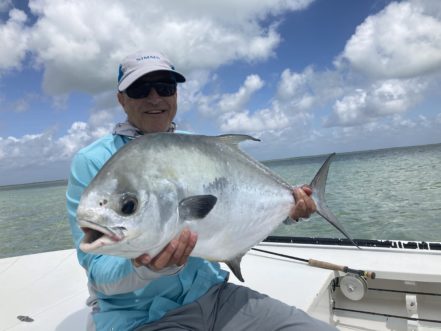 FISHING
While we located a large number of permit during the week, anglers found the fish to be extremely finicky.  We had countless fish follow the fly for a painfully long time before eventually denying it or spooking off of the boat. Most of these fish were in small schools of 3 – 4, or nice sized singles in skinny water. After Keith Smith fished with guide Alex on Monday and landed two nice permit, we figured there would be plenty of other fish brought to hand. While there were ample opportunities, coaxing a fish into eating the fly proved to be extremely difficult. A wide range of shrimp and crab patterns were used, but the few fish that were landed succumbed to the classic tan or white crab patterns we have seen become a staple in this fishery. Allen Smith joined us this week for his first saltwater experience in this region of Mexico.  After spending a good chunk of his day catching bonefish, Allen found himself near an exit of one of the backcountry lagoons on a hard falling tide. After a couple of shots at nice fish, his guide Victor stepped down off the platform to give Allen some instruction on his cast. After a few practice casts, Allen laid out a nice shot about 60 feet out. They both realized Allen had unintentionally placed the fly perfectly in front of nice permit that randomly showed up. What was at first some mellow casting instruction quickly became directions from the guide as to how to retrieve the fly for the following permit. Sure enough the fish reared downward and ate the fly. Allen performed a perfect strip set and landed the 15 pound fish. Congrats to Allen on his first Mexican permit! For a week full of so many fish that eventually refused the fly, we were all entertained, and possibly a bit frustrated, during the recap of the day’s events during dinner. 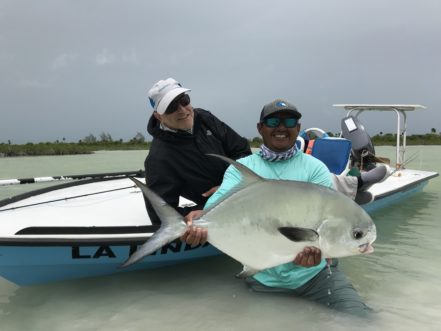 The group collectively landed 4 permit during the week, which brings our season total to 354 permit with 126 guests.

Snook fishing was excellent this week, if not incredible a few of the days. Gustavo Hiebaum, who runs Set Fly Fishing in Argentina, returned for his second trip to ESB and brought along co-worker and good friend Matias Claret. We were excited upon their arrival, as every step of the way traveling from Argentina they were unsure if it would all come together. After a difficult morning chasing permit, Gustavo and his fishing partner for the day Kevin Landon, decided to head into a back lagoon area we call “2nd River” in search of snook and tarpon. With a nice falling tide, the conditions aligned and the duo enjoyed an incredible afternoon of snook fishing. They came across school after school of fish; and we’re not talking 18 to 20 inch snook. The majority of these fish were in the 10 to 20 pound range. Kevin and Gustavo each landed multiple snook on Wednesday, with the largest coming in at right around 20 pounds.  Gustavo ended the week on Saturday with another massive snook in the same size range. With denial after denial from permit throughout the week, Alex Maher of Jackson Hole decided it was time to give the snook a shot the final day. After a few denials from the snook as well, he tied on a chartreuse tarpon toad and finally found the fly the fish were ready to eat. Allen Smith also found himself as part of the Snookzilla Club, landing an 18 pounder on Friday with guide Marcos.  It was an excellent week for snook fishing to say the least, with all anglers landing at least a few. 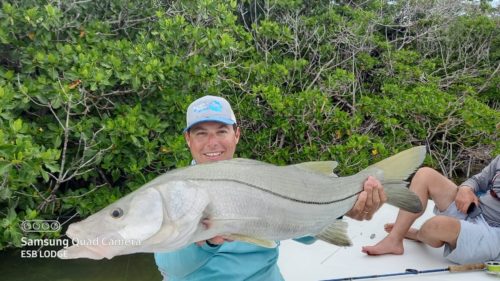 Matias Claret is a very accomplished freshwater angler, with the trout waters of Patagonia and golden dorado waters of northern Argentina, but was brand new to the saltwater game upon his arrival. It didn’t take long on Monday before he was hammering bonefish and jumping juvenile tarpon. He enjoyed the rest of the week catching more bonefish, tarpon, snook and having a few great shots to permit. While we certainly didn’t see the number of tarpon in the backcountry as we did snook this week, tarpon fishing was a nice break from the grind of permit fishing. With heavy cloud cover and a lot of rain on Saturday, a few of the boats found themselves at the mouth of the bay looking for migratory tarpon. Often times in-between major rain events the wind will significantly lay down, creating the calmer conditions necessary to see rolling tarpon. Right away fish were spotted, but it looked as if they were moving fast. Guide Marcos fired up the motor and ran around the fish with a wide girth to eventually cut them off and give Gustavo a shot. He quickly hooked into a large fish, close to the 80 pound mark. With everything going down so rapidly, the line managed to find something to catch on the boat and the fish broke off. Gustavo hooked another similar sized fish a little bit later, unfortunately with the same outcome. There were many other schools spotted rolling, and it is great to confirm these fish are still in the area we expected them to be when conditions are conducive to spotting them.

WEATHER/TIDES
It seemed like the southern Yucatan threw just about every weather condition it had at us this past week. We had some great sun earlier on that aided in spotting fish, with average winds for this time of year. As the week progressed, weather became more unfavorable with difficult visibility and consistent rainstorms.  Saturday was met with very heavy rain for portions of the day. The tide once again rose for a few hours in the morning, and then after an hour or so of slack, began to fall for the remainder of the day. 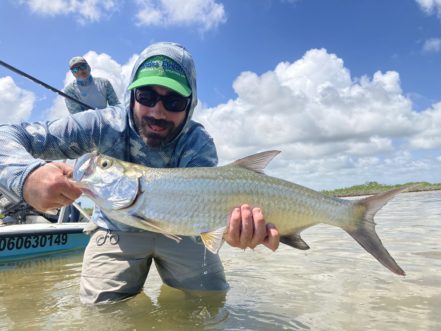 FLIES
All permit were landed on size #2 white or tan Casa Blanca style rag head crab with yellow eyes. Snook were caught on a range of patterns. A grayish/white EP baitfish pattern was very effective for some anglers. Chartreuse was also a productive color, with both tarpon toads and smaller baitfish patterns.  A chartreuse/white color combination in a size #4 worked well on some schools that were tight lipped to the more classic and larger patterns.

Tarpon fell victim to black/purple EP baitfish and tarpon toads. The two large migratory fish both ate a black baitfish pattern with a deer hair head on a size 3/0 hook.

STAFF
Chef Carlos continued to lead the kitchen staff in delivering delicious meals with beautiful arrangements.  Guests were impressed with his consistency and attention to detail. The house staff was always available to meet any requests the guests had to ensure they enjoyed a comfortable and memorable experience.

We are excited for the arrival of six guests this upcoming week. Good friends David and Janet Dill have returned to the lodge every year since the beginning, and we are always pleased to have their company.  Some new faces will be joining us around the dinner table, and we hope they will enjoy their first experience at this top notch operation. Weather will be a major challenge for the first few days of the week, as we will continue to experience heavy rainfall from a large system that is now over the northern Yucatan Peninsula. We are hopeful it will clear out and skies will open up to show some sun later in the week. 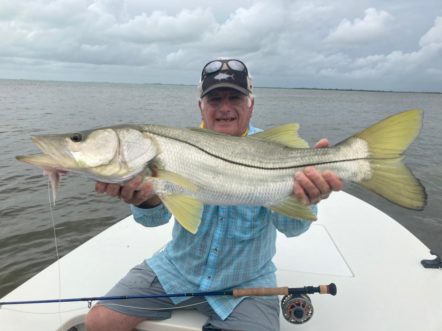 Have a great day and make sure to check in with The Fly Shop® to inquire about spending a week with us enjoying cold margaritas, awesome food and great fishing. Stay tuned for next week’s report!