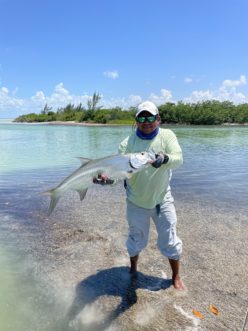 We have enjoyed another week full of fishing here at ESB Lodge. Six anglers joined us, and enjoyed catching all four target species that our flats will hold. Only one guest, Tom Peterson, was new to our operation and quickly learned what a special place Espiritu Santo Bay is. Everyone else was returning for either their second or third excursion to this beautiful region of Mexico. We battled very heavy winds early in the week, but this didn’t stop the guests from hitting the water and enjoying some very productive days.  Light winds by the end of the week were much welcomed as we woke to calm seas and a beautiful sunrise.

FISHING
Considering the heavy winds we started with, I would say fishing was phenomenal for the conditions provided. As it has been the last few weeks, permit fishing remained consistent with good numbers of singles sighted in shallow waters. Lots of fish were caught out of schools in deeper water as well. I believe we will continue to see impressive numbers of permit caught as we gradually transition into our summer fishing patterns. 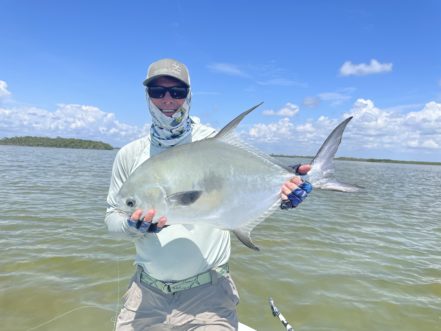 Rodney Neil joined us for his second trip to ESB, and brought along friend Tom Peterson. This was Tom’s first trip to Mexico, so understandably he was enthusiastic about targeting new species in a new location.  After difficult conditions in the wind and some slower days early in the week, Tom and Neil set out with guide Marcos on Thursday. Tom was able to seal the deal in the morning with a beautiful 15 lb. permit; his first ever on a fly rod. With this accomplishment, they ate a quick lunch and decided to change things up and pursue some juvenile tarpon. Marcos navigated the boat deep into our fifth river system. This takes some time and often the client is working just as hard as the guide; pulling and pushing the boat through a long stretch of tight mangroves. They finally made it through and both Tom and Rodney were able to catch a few nice fish in this challenging, yet rewarding location. This was also Tom’s first time catching tarpon on a fly rod. As the day was coming to an end, they navigated their way out and headed to a location to catch a bonefish. With everything eating the bonefish fly other than a bonefish, it seemed as if Tom’s grand slam may not come to fruition. With minutes to spare, a 12 inch bonefish was launched into the boat for a quick photo and they high tailed it back to the launch. Congrats to Tom on his first permit and tarpon on the fly rod.  A grand slam well deserved! 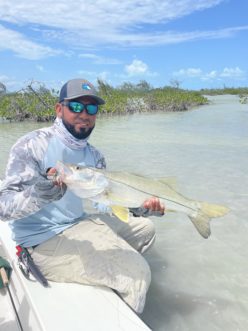 Sabrina and Jeff Sellmeyer joined us for their second trip to ESB this week. Unable to seal the deal with a permit on their last trip, they were dead set to bring one of these bucket list fish to hand. Within an hour on Monday, they had both successfully landed a permit out of two different schools of fish. I couldn’t have been happier for these two, but they certainly did not stop there. Jeff and Sabrina managed to land an impressive 8 permit between the two of them during the week. On Tuesday they hit the water with guide Victor looking for some refuge from the wind. They made the journey into the infamous fifth river where Sabrina was able to land her first ever tarpon on the fly. We look forward to the Sellmeyer’s return in September, and hope they will enjoy another successful week of fishing.

With the heavy winds we experienced the first three days of the week, most of our permit fishing took place along the southern shore. This provides some protection from the wind and eliminates long and rough runs across the bay to where the water would have been much dirtier. Two zones along the southern shore called “Red Buoy” and “Tavos Canos” fished well for the entirety of the week. When the tide is higher in the morning, we will often find large singles cruising or tailing close to the shore in these zones.  Return guest Peter Petruzzi experienced what he referred to as one of his greatest days of permit fishing ever on Monday. He set out with guide Alex, and target permit all day. They sighted multiple singles in shallow water and hoaxed three permit to eat, with a few other follows and refusals. All three of these fish were over 15 pounds. A three permit fish day is hard to come by, especially with all fish landed being over the 15 lbs range. Peter kept the pursuit going for the rest of the week, and brought to hand a total of 6. 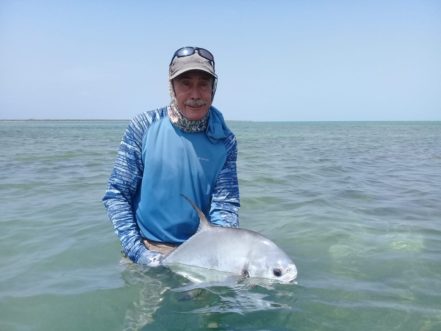 Collectively the group of six landed an incredible 27 permit for the week. This brings our season total to 293 permit with 93 guests.

Tarpon and snook fishing was limited to the southern and southwest portion of the bay while the wind remained strong. Once conditions calmed down a bit, a few boats were able to check out our 1st and 2nd river systems. Most of our tarpon were caught in Fifth River, with a few in Red Lagoon close to the boat launch.  After completing two grand slams early in the week, guest Peek Garlington was on the hunt for a snook. In addition to finding snook on both Friday and Saturday, he managed to land the other three target species. Needless to say, Peek was ecstatic with his week of fishing after two grand slams and two super slams.  Impressive feat to say the least!

Bonefish were readily available in various very shallow flats. It is never ill advised to take a break from balancing on the bow of the boat in two foot waves looking for permit  A quick run to the ample bonefish flats typically result in large numbers of fish all very willing to consume a shrimp pattern of any variety placed in front of them. 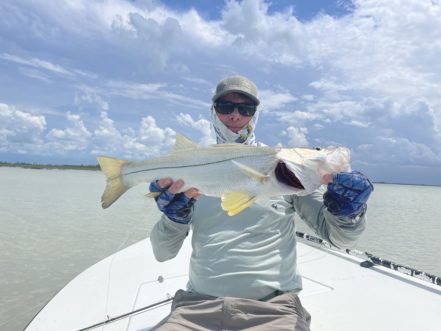 Tarpon were caught on a wide range of patterns the week.  Purple tarpon toads, EP baitfish patterns in black/purple and black/red and other patterns in white/red color combinations were all effective. A chartreuse tarpon toad can be advantageous to a school of fish that has turned their nose up to the classic darker colored flies. 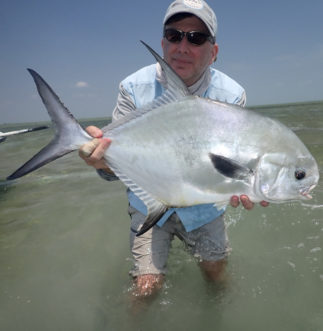 WEATHER/TIDES
When guests arrived to the lodge on Sunday, the thought of attempting to cast a fly rod in the current conditions seemed to be off the table. The wind blew extremely hard out of the southeast for the first three days, and then gradually laid down. Friday and Saturday were the kinds of days you dream of when fishing the southern Yucatan during the windy spring months; sunny with a light breeze. Tides remained consistent, rising in the morning until around 10 or 11, and falling for the remainder of the day.

Chef Carlos and the kitchen staff continue to work tirelessly to deliver delicious Mexican dishes with a Mayan flare. Guests continue to be impressed with the authenticity of our food here in this remote location. The house staff worked hard to ensure a high degree of cleanliness was maintained and the guest were able to enjoy a  well-run, orderly lodge.

This week should be great fun with a group of 6 returning anglers. We have had the pleasure of hosting Mike Scott a number of times here, and always enjoy his return. His upbeat personality and lifetime of ridiculous fishing stories always provide ample laughs at the dinner table and beyond. Bob and Chris Iverson out of Houston will be back after getting delayed an entire year due to the pandemic shutting down operations. Chris always comes down with an incredible arsenal of his own tied flies. I am consistently blown away with his ingenuity and creativity when creating patterns for this fishery. I have the feeling an extra year of time to generate new patterns will have his boxes looking fully stocked.

Make sure to give our friends at The Fly Shop® a call to enquire about a visit to this incredible operation.  They will readily assist in planning a trip here or to any other fly fishing destination across the globe. Make sure to get outside and enjoy some nice spring weather.  Stay tuned for next week’s report.