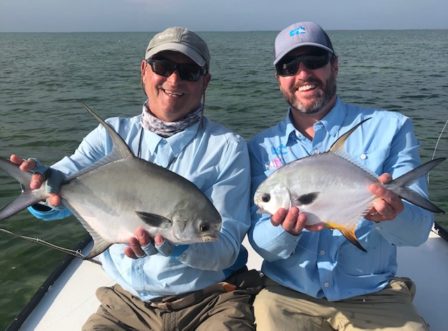 We’ve been enjoying ourselves here at ESB Lodge, thus concluding our second week of the 2021 season. We were joined by seven guests all of whom have become regular faces around here and we’re happy they enjoyed another great week. ESB Lodge has a long season, almost 38 weeks for the year. Our calendar, for every week, has familiar names and faces that have fished with us in past seasons. It’s a great feeling to provide an awesome place to provide a gateway to one of the best flats fisheries in the Caribbean. Everyone in our group last week had stand-out moments on that water and celebrations were had by all.

FISHING
Things are starting to warm up in the bay and I feel as though we’re right on the cusp of classic early spring fishing around the corner. We had a lot of wind this week which changed our tides a little bit. We don’t mind the wind here, almost to be expected throughout the winter and spring months. The key to productivity we’ve learned is consistency. In most cases despite strong winds, if the direction doesn’t change sporadically, we can maintain some solid days on the water. Last week the wind was steadily out of the southeast for the most part and a high tide that was stacked early in the morning. This brings in warm water and slows the “leeching” process of fresh water leaking out of the backcountry mingled with a tannic stain from mangroves.  We were able to fish parts of our river systems as well as some flats deep in the southwest part of the bay that were void of fish two weeks ago. Permit fishing is starting to pick up and almost every day provided a few shots to each guest. We’re finding them close to shore for the most part with the higher tides in the morning. The last two days of the week it seemed we started seeing good pushes of fish and some very large schools closer along the shoreline, not far from where we launch guests in the morning. These schools hold mixed size fish ranging from 5 lbs. upward to 20lbs. We saw a few schools that held 50 or so fish in them and a couple guides commented on two schools that easily had 100 permit, mixed with bonefish, jacks, runners, and other smaller fish. We should start seeing some of these schools break up and disperse throughout the fishery, based on food availability and tidal change. Guest Ron Dozeman had a fun week with us and landed his largest permit to date his first day on the water with guide Alex.  Ron jokingly commented he caught his first permit, 30 minutes into the week and finished with an incredible father son double the last 10 minutes of the week. He was also able to get another fish middle of the week. Ron also enjoyed celebrating his birthday with us and we will refrain from sharing an actual age, although we chose to decorate his tres leches birthday cake with only two candles properly representing his age. Blackwell Smith joined us for another week and was able to fish as a single for the week. Blackwell got after it, chased and caught permit throughout. We were able to sneak him into some spots located on some backcountry flats located on the southside of the bay. There’s a significant weight difference fishing single and sometimes we can get you deeper into our bay systems, ride out the last bit of outgoing tide to optimize time. Blackwell ended up landing 3 permit for the week.  Most of our guests landed their permit last Friday and Saturday. 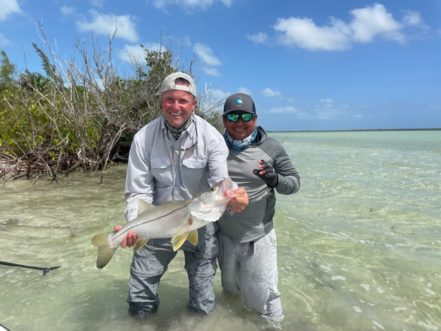 We had a solid count for the week with 11 permit and 7 guests.  This brings season totals to 16 permit and 14 guests.

Our afternoons we had shots at Tarpon in the river systems on the north side of the bay.  Tarpon didn’t seem as strong as the previous week and I believe it’s due to much more water in the bay. Guest Matt Fender had an interesting encounter with a very large Tarpon between 80 and 100 lbs. with guide Alex. Alex poled Matt and Mark in the southwest corner of the bay looking for permit without any luck and chose to have lunch and take a break. They finished lunch and were motoring out, when Matt asked if there were any tarpon spots close to their location. Alex promptly said no, they’re more fish on the northside. A couple minutes later Alex announced Tarpon to the anglers. Those that know Guia Alex, understand he is the quietest out of the group of guides and has one the fishiest boats in the bay. Tarpon announcement from Alex perhaps was a couple octaves higher than his usual baritone. There were 4 huge Tarpon calmly traversing a flat in front of them. As an angler I would have lost it seeing such huge fish in skinny water. I admire Alex’s determination, and he poled more than 400 yards chasing the 4 big fish. They eventually turned and Matt laid a nice cast, one strip, and one of the tarpon ingulfed his fly. A chaotic fight followed, with beautiful tail walks across the flats. Both Alex and I believe these fish came from a large cenote close by where these fish are probably resident to the bottomless hole. The tarpon was able to return into the cenote where it became a process of deadlifting the big fish from the depths. I at one time dropped 150 feet of line down this hole with a live runner in hopes to catch a big grouper, I never hit bottom. They got the fish back on the flats and Alex was able to leader the fish once before a last-minute charge from the tarpon led to a break off. Heartbreaking in the sense of not cradling a special fish such as this, but leadered regardless. Mark was able to capture an awesome photo of the fish doing a headstand seconds before the disconnect. Understandably once we put this photo to social media I was blown up about inquiries of the possibilities of seeing fish this size in the coming weeks. Don’t count on it, it’s known to happen occasionally this time of year especially around a couple big cenotes we have. Should you be geared with a 12 weight to appropriately fight these fish?  No is my answer, if you are you’ll never see one again, correct?  When these opportunities come around use the resources you have at hand and trust the guide to do everything in his power to make it all come together. 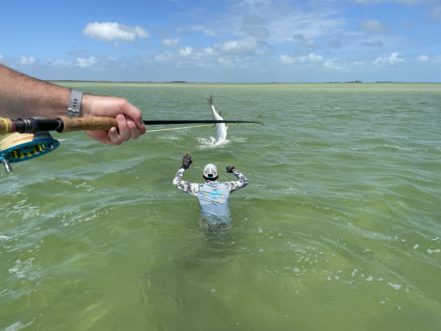 Our snook fishing was better than our first week. Interesting how we saw a reversal between tarpon and snook. We had more shots last week and landed some nice fish. Mark Fender and Jon Hop enjoyed their last day with Guide Fernando and got into some classic size snook around 10 pounds. Our snook fishery is one of the best in the Caribbean. This was affirmed by saltwater guru (my hero) Chico Fernandez when he visited us in 2017. Some of the pictures we share in this week’s newsletter are a solid average for us and we find them year-round. 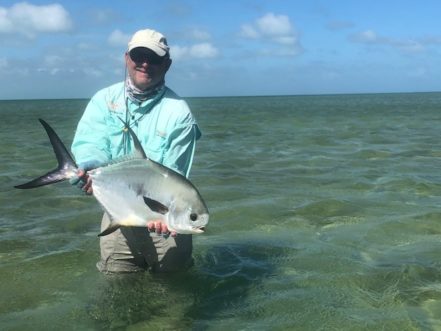 Bonefish were readily available throughout the system and everyone was able to enjoy some large Yucatan bonefish. A weekly mantra is guests claiming how big these fish are. Indeed, we have the best quality bonefish in Mexico or Belize.

WEATHER/TIDES
We had a little bit of everything in the way of weather. Mixed clouds, sun, heavy rain, all made an appearance last week. Winds were fairly consistent from the southeast with an average of 15 – 20 mph.  Tides were high in the am and subsided in the afternoon. 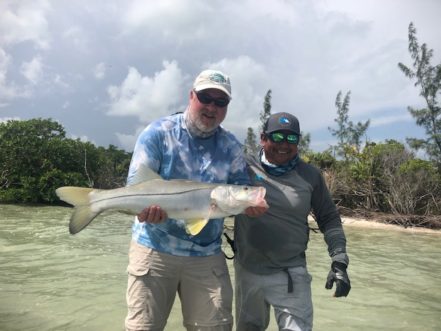 FLIES:
Our choice permit fly for the week was a Casa Blanca (white) with yellow eyes on a #2 hook. Tarpon and snook succumbed to EP style baitfish flies and toad variations.  Classic color combos, Black/Purple, White/Chartreuse, White/Grey, and everglade color combo. Bonefish ate anything and everything from a #8 bonefish shrimp to a 2/0 EP baitfish tied off on 60 lb.

Carlos and the kitchen crew did well for the week, making sure guests had wonderful food, throughout their days. We enjoyed rellenos, ceviches, sopas, tacos (carnitas, pescado), slow roasted pork, and array of delicious desserts. 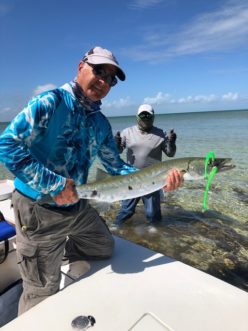 We’ve got a fun crew this week with most of the guests having been here before. Close friend Peter Petruzzi is the band leader for this week’s crew and has become a regular here at ESB Lodge. We have an awesome group of talented fishermen and I expect some fish to be caught.  I might add this current group could easily hold a record for number of strung rods on the boat and in our lodge rack. We’re loaded with serious inventory and no shortage of equipment. 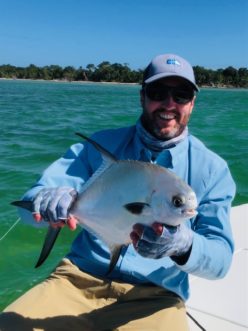 There’s some mixed weather for the week, with perhaps a significant wind change in a few days and it’ll be interesting to see how the fish respond. I’m confident in our crew and guides that’ll we lock down another memorable week here at ESB Lodge. If you have an upcoming trip with us or interested in a nearly sold out 2021 season, do not hesitate to call our friends at The Fly Shop. They’ll give you up to date info and provide you with what you need before you head down. Hopefully, everyone had a nice Valentine’s Day and are looking forward to another great week. Stay safe, and look for us with the next fishing report. 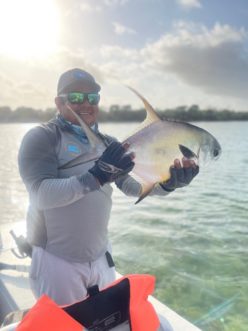