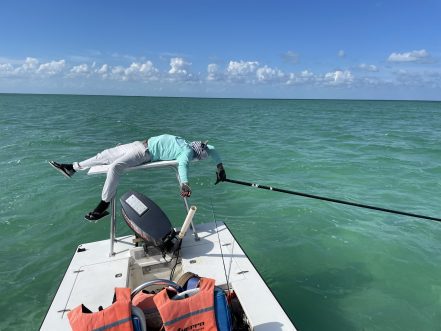 What a week we had here at ESB Lodge.  The lodge has been on a roll with the fishing, logistics, clients, and putting out fantastic trips for 2022 thus far.  We’re busy, with a lot going and the normal day to day projects getting knocked out.  I’m watching the operation almost run itself and am in constant awe of what has unfolded in front of us as a premier saltwater destination.  I turned 34 yesterday and I’ve been happily informed by our current group of guests that I sit at half their age, and I am by most standards still “young”.  Chiara and I started this project at 27 years old which seems like eons ago and there’s not a day that goes by I take for granted. 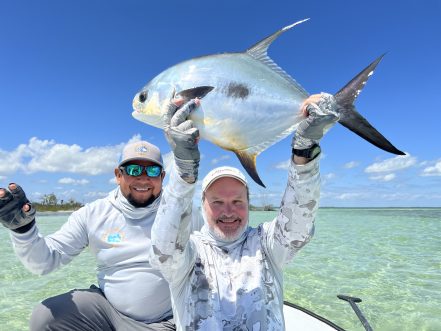 ESB had the pleasure of 8 returning friends led by The Fly Shop’s own Justin Miller.  Justin and the gang have been coming here since 2017 and by far their 6th trip was the best one yet.  The week morphed into one of the best permit weeks this operation has ever had.

FISHING:
I was watching the weather like a hawk before the group came in and it showed some promising conditions that I was hoping like hell would come through for us. The weather was indeed perfect for the motley crew of 8, a recipe of only the finest ingredients with high sun, light winds, perfect tides, and a bay filled to the brim with permit.

We’ve had some very strong winds with monster tides our previous weeks but were still very productive.  One could almost feel the energy of the fishery as it seemed like a barrier of weather conditions was broken down and onslaught of fish poured into our system.  It was as if the permit were making up for lost time or eating hard in anticipation of the next hard spring winds to return.  There was a north-northeast wind for much of the week which is a little unusual.  Spring months give way to a prevailing east wind that slides more south as we get closer to summer. 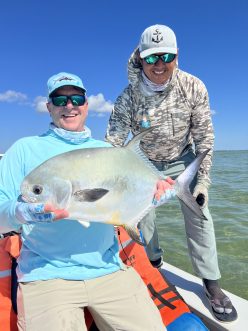 With the given winds deeper water along the north coast was where we spent most of our time.  Guides ran outside of the bay and further north to some protected flats that were holding permit.  Coming back into the bay we were able to hit a few of our southern haunts we’ve been working the last few weeks as well.  Red Buoy running southwest through Tabasquenos had fish.  A couple guides parked themselves on a funky current that runs strong with an outgoing tide in the middle of the bay.  It’s located dead center across from the mouth of river 4.  We opted to pole in the middle of the bay in what I would describe as the middle third.  Not as many fish were there but if you put the time in, you’d see larger permit.  River 3 had some fish inside, as well as the mouth.

Clients had anywhere from a couple shots upwards to 50 a day.  What really impressed me was the size of the fish we landed.  Majority of permit landed were at 10 – 20 pounds.  We caught a couple smaller and a couple bigger.  ESB had a week last year in the spring where we landed 69 permit in the week.  Most of these fish were small and holding in big schools, almost easy (I hate saying that) to catch when you have schools the size of a baseball field swimming at you.  We saw mostly singles, doubles, and smaller schools last week with a steady stream of fish coming in and out of the bay.  Please don’t get me wrong, seeing any manner of permit no matter the situation, size etc. is always exceptional. 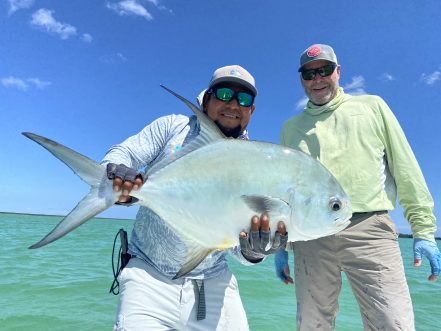 Five out of the eight anglers had their personal best week of permit fishing. Bill Shaughnessy went 6 for 6 on catching permit every day of the week.  He hit a total of 7 permit for the week, a personal best.  Whatever Bill was doing was working, and the key to success I believe also resides on riding the coattails of superstition.  Bill whole heartedly agrees, thus not changing a single thing to his daily program, whether it was time he woke up, attitude, or even carrying on by not changing his clothes for 6 days.  I am a firm believer of karma and a superstitious approach having held my own personal counsel to please a higher power for the successes in a week of fishing.  If I were Bill, I wouldn’t wash those clothes and bring them out again next year, same time, same place.  An old permit war chief donning his headdress for battle…

Bryan Wise had a great week totaling out 4 permit and was graced through a rotation which led him to fish on Alex’s boat more than a couple days.  He also caught an awesome fish with the aid of Victor.  Steve Wise rallied to land 6 permit for the week another personal best and he also got his first grand slam.  The slam came from a unique approach and not one you may hear about every day.  Steve hooked a permit initially on a crab, fought the fish for a second and the crab come unbuttoned.  The sinking feeling of stripping a crab that was once hooked in the corner of permit’s mouth settled.  During the empty retrieval a tarpon showed up and happily ate the crab.  I would’ve had a heart attack.  What should’ve been quick work on 20 lb. test ended up being a long battle that lasted for some time.  Alex knew he couldn’t leader the tarpon and run the risk of the tippet becoming severed.  Alex removed his hat and glasses and swam alongside the tarpon attempting to bearhug the fish.  Tarpon don’t care to be bearhugged and there were some tight moments where the fish squirted from his arms.  I would’ve had a second heart attack.  He finally got the position right and was able to wrangle/bearhug/rodeo the tarpon into Steve’s hands for a well-deserved picture.  Steve then later that day successfully landed a permit and a bone completing the slam.  Ken Morando got 3 permit for the week and caught a beautiful tarpon with guide Pepe.  Brian Macdonald added 4 more permit to the weekly total almost repeating last year’s week of fishing.  Karl had a great week landing 5 total and a monster fish at a solid 20 pounds with a white crab.  This translated to the most permit he’s landed in 6 days of fishing.  Charles Tyson also got 4 for the week and caught the largest permit of the group. Justin Miller had a personal best day landing three fish with Victor and then another three in one day with Alex.  He also landed a couple fish with guide Fernando.  Justin ended up landing the most permit of the week hitting 8 total.  We also discussed running a very long 16 pound floro tippet rather than adding length of the leader to the butt section.  He’s a believer.  Almost every client caught fish with all the guides which is also a great accomplishment. 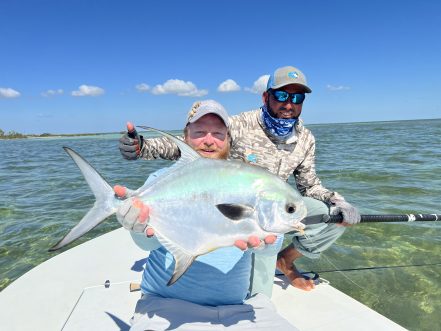 It was a week of permit fishing that would be hard to top in years to come.  I may never change my underwear.  The crew of 8 landed 41 permit for the week, bringing our season total to 89 permit with 35 clients.

WEATHER/TIDES:
Weather for the week was beautiful, lights winds from the north and full sun.  Tides were relatively low but incoming in the am and starting to drop middle of the afternoon.  I truly believe we hit a great stride of strong water movement which led to more fish in the bay. 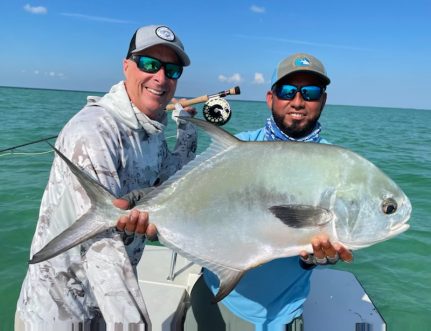 FLIES:
All our usual permit flies did the trick.  Below is a list of flies that have been working very well and you must have in your box to chase permit here.

ESB Crab white #2, ESB Crab tan #2 (both of these have yellow eyes)

Always a #2 Squimp for good measure!

These 9 patterns worked last week and have produced very well for the 2022 season thus far.  We will not let you off the lodge property to chase permit unless you have a proper assortment of the patterns above! 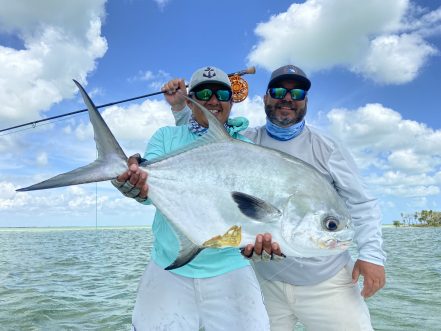 Chef Carlos had a few days off last week after pouring on a heavy workload with 41 days straight with no break.  Sous Chef Luis stepped in and knocked it out of the park for everyone maintaining our weekly weight gain requirements at 7 pounds per guest.  I am extremely proud of the group, how hard they work, and the level of execution is second to none.  Emmanuel (Manny) worked on projects with Freddy all week and those guys kept it all together providing us with a comfortable, functioning operation.

We’ve got sun now as I write the newsletter and let’s hope some of last week’s luck rubs off for this next group of 5 anglers.  There’s some wind and rain in the forecast but nothing to out of the ordinary.  There are some new faces amongst us now and a couple ESBL veterans in the mix.  Guides are primed up and Carlos is backing whipping up more delicious cuisine, just another wonderful week here at ESBL.  If you have any questions or would like more info regarding the operation, please drop a line to our friends over at The Fly Shop.  Hopefully winter is loosening its grip in your neck of the woods and you’re able to get outdoors.  Please take care and of course stay tuned for the next report! 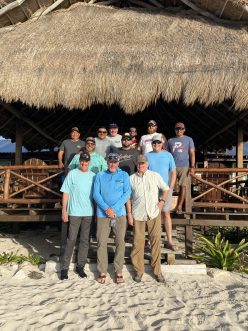