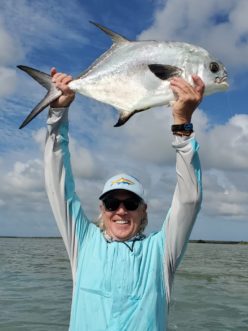 We have successfully made it through another full week of fishing here at ESB Lodge. We were joined by seven anglers, three of which were enjoying their first experience fishing this region of Mexico. After missing a few trips due to the pandemic, good friends Bill and Liane Forrester were finally able to make the journey back down here and join us once again. While there were good opportunities at other species in the bay, this week was extremely difficult for permit fishing. We had a feeling this was going to happen at some point, especially considering the numbers we have been putting out in the previous weeks. Our ever restless spring wind continued to blow hard, while minimal sun for the duration of the week made permit fishing a very arduous endeavor. Thankfully we had a wonderful group of guests that hit the boats every morning with a positive attitude that continued through dinner and drinks the following evening. 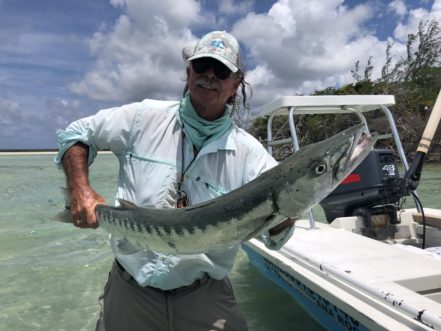 FISHING
The southern shore of the bay in the morning when the tide is high has been a great area to start off the day looking for permit. With a higher tide these fish will tend to be closer to the shore and feeding in much shallower water. While some of our flats in this area held a few fish, the numbers of permit in these zones was much less than previous weeks. Visibility was very challenging, with little sun aiding in spotting fish at a distance. While fishing deeper water, often times we had fish come in that simply were located too late and quickly spooked. With the lack of sun, we have to result into looking for “nervous” water while hunting for permit. This is a slight disruption in the water that a school or individual permit will make if they are high up in the water column. Understanding what nervous water looks like takes a lot of practice, as this indicator of a fish is such a discrete difference from the normal waves or chop that you are scanning.  Larry Jones returned to ESB for another trip, bringing with him good friends Richard, Fred and Frank.  Larry and Richard successfully located a big school of fish midweek by finding that “nervous” water. They estimated there were somewhere around 40-50 fish in it. After throwing every fly in their box to them without any eats, the school was eventually lost track of. This was especially frustrating after so few opportunities earlier that day. With the sun finally showing itself Saturday intermittently, Frank Hatanaka and Fred David set out to one of our favorite permit locations on the northern side, “Ensenada Bay.”  They did not end up landing a fish, but were happy with the number of opportunities they both had. They witnessed just about every encounter you can see out there; singles on rays, singles/doubles tailing and some nice sized schools as well. Frank and Fred had a good laugh at dinner Thursday night as they retold the story of stopping for lunch after a tough morning and having a permit swim practically within arm’s reach of the boat. This happens more often than one would imagine, and it was noted that the guide, Alex, suggested they keep a rod out at lunch the next day. Scott Peterson returned for his second trip to ESB, and was able to prevent us from getting skunked for the entire week. He set out Tuesday morning with guide Pepe to target fish along the southern shoreline. It didn’t take long before they spotted a nice 15 lb. permit slowly feeding in shallow water. With a break in the clouds, Scott placed his tan crab a few feet in front of the fish and started the long and slow retrieve. The permit quickly tailed down onto the fly and Scott performed a perfect strip set. A handful of other fish were hooked during the week, but Scott’s was the only permit that was landed. 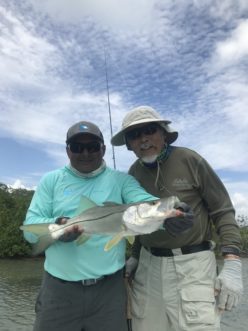 This brings our season total to 311 permit landed with 106 guests.

Snook fishing for the week was decent, as a falling tide in the afternoon forced fish to retreat out of the deep mangrove cover. Most of the snook seen and or caught were located within our “river” systems.  These are not so much rivers as they are entrances into the backcountry systems on the northwestern portion of the bay. Bill and Liane Forrester witnessed a very interesting event during a falling tide on their second day. With the boat tucked into a small channel/drainage within the second river system, a heavy falling tide was pushing large numbers of 20’’ or so snook off of the shallows and into the channel.  With casting a fly rod in that specific location practically impossible, they simply sat back and enjoyed witnessing this very uncommon event. Bill and Liane have such positive attitudes out there on the bay, and are willing to pursue whatever species the guide believes the conditions are most conducive for. In the middle of the week, they had what they called a “close call super slam” for the boat. Bonefish and tarpon were landed, and snook and permit were both lost within arm’s reach from the boat. 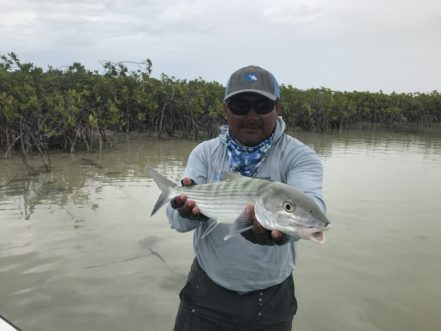 Opportunities for juvenile tarpon remained consistent in the afternoon once the tide had fallen out. Just as with the snook, all of the tarpon caught for the week were somewhere within our river systems. We did get the opportunity to hunt for migratory tarpon in the main channel of the bay later in the week. Some large fish were spotted rolling, but unfortunately we were unable to connect with any of them. We are hopeful to spend more time looking for these fish in the following week if the wind subsides a bit. An 11 weight rod with an intermediate sinking line is a necessary tool for guests in the following weeks intending to try their luck on these large fish.

Bonefish were abundant as usual, and guests this week were pleasantly surprised by the size of some of the fish that were landed. It is always suggested to spend a few hours at least during the week to enjoy the fight these powerful fish will make. If the wind isn’t too bad, I always take pleasure in catching bonefish on a seven weight. Guests also landed a handful of barracuda this week. It is a great idea to have an extra nine or ten weight rigged up specifically for barracuda. These fish are aggressive to a quickly stripped fly and will put up an incredible fight with some spectacular airier maneuvers.

WEATHER/TIDES
The weather for the week was about as bad as it can be for saltwater fly fishing, especially when looking for permit. The wind continued to blow heavily out of the southeast, and clear skies evaded anglers for the entirety of the week. All six days of fishing were cloudy and overcast, with some heavy rainstorms the last two days.

Tides remained consistent; rising until mid-morning and then falling for the remainder of the day. 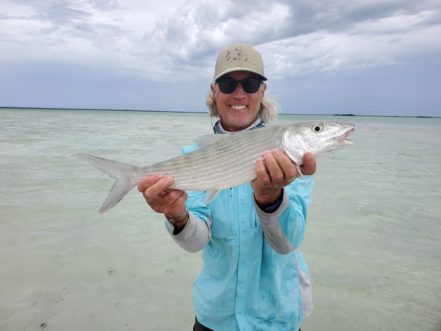 Both return and new guests were impressed with the hard work Carlos and the kitchen staff performed throughout the week. They do a wonderful job of keeping this entire operation well fed and happy. We will always have strong margaritas and delicious cuisine to enjoy once you return back to the lodge from your day of fishing. 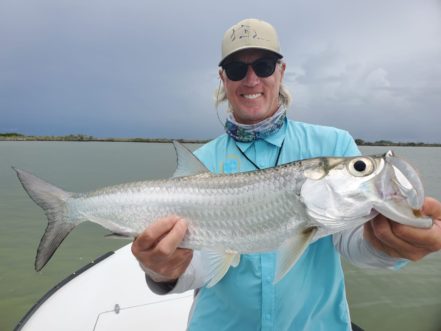 The forecast for next week looks much more promising, and I believe we will be right back on track with numbers of permit. Abundant sunshine will be much welcomed by the guides who spend hours every day scanning the water looking for anything resembling a tail or fin. We will be joined by 7 anglers this upcoming week, all who’ve made previous trips to ESB. Make sure to drop a call or send an email to our great friends at The Fly Shop® if you would like to enquire about spending a week of fishing in this remote region of the southern Yucatan. They will readily answer any questions you have regarding ESB or any other remote fishing operation around the globe. I hope everyone is enjoying the spring weather and looking forward to the long days of summer quickly approaching.