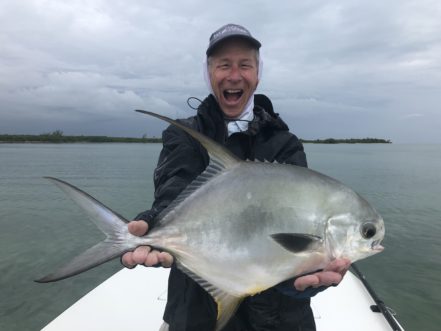 We’ve enjoyed another action-packed week here at ESB Lodge.  The lodge had the privilege of hosting a group of 6 friends, all newcomers to ESB as well veteran lodge guru Mike Matus.  Mike will have completed his third trip this year alone and is on the books for another week here end of October into November.  We had great time, plenty of cervezas were consumed (extra trip to Mahahual was required) and the high energy group caught plenty of fish. 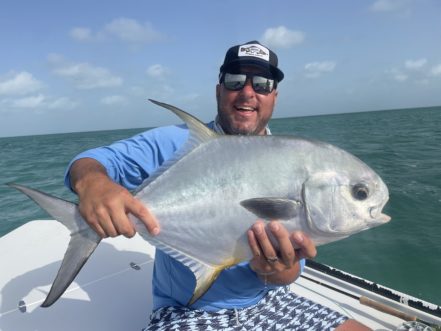 FISHING:
I have damn near given up predicting weather this time of year, it’s become a daily struggle to determine sun, no sun, clouds, rain, etc.  Prior to the week kicking off we were looking at less than ideal conditions.  Strong winds, rain, zero sun, and straight easterly winds.  We did have wind, but mostly southeast, we did have clouds, but lots of sun.  It did also pour rain, only for 1 ½ days’ worth.  The fishing report for this week is short and sweet, with an emphasis placed on one fish – Permit.  There was a mixed bag of ability levels and years of experience.  Michael Surham and John Pasqualetto both newcomers and far from their comfort levels tagged along with the group both as experienced fly anglers but with zero experience in the salt.  Sunday night gave way to shouting matches of encouragement from fellow anglers, the dos and don’ts, and even the forbidden codes one must adhere to while trying to enjoy a day of fishing.  Monday morning Guide Fernando zipped them over deep into Ensenada along the northern eastern part of the protected bay and they caught all manner of jacks, bones, runners, and snappers.  Similar to having national geographic at the end of your hook it seemed.  They concluded the day along the southern shoreline just down the beach from our Casitas stretch of water.  By the end of the day, they were honed in with their newfound skills and were off to the races for the rest for the week.  Guide Fernando does an incredible job transitioning anglers and prepping them for a week of flats fishing. 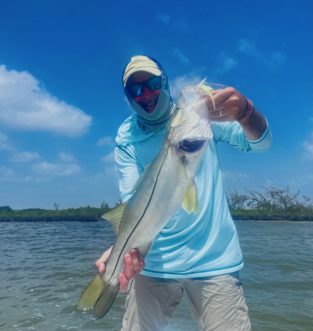 John Pasqualetto ended landing his first 4 permit ever with two bigger fish around 10 lbs.  Mike Surham capped his week with landing 3 permit.  The two shared the boat Thursday and were able to land the only snook for the week.  Our tarpon and snook fishing were almost nonexistent due to high tides and a very slow fall.  We had extra water stacked which I can only translate to a mixing bowl of currents and winds far offshore which made its way inland.  I was surprised of the water level beachside in front of the lodge.  It felt like I had tailing triggerfish at the foot of my office door. 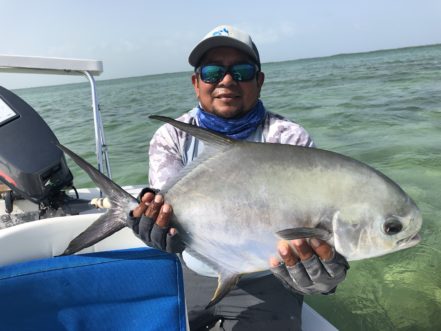 Back to permit:
Our bay is loaded with permit right now and has been for the last couple weeks.  Hundreds of fish of all sizes are schooled together and concentrating along the southern shoreline starting at “Red Buoy” and working east towards the southern cut/opening to the bay.  It seems like we have schools of fresh fish and spookier schools that probably have been in the system for a while.  Everyone took advantage of the schools, anglers, dolphins, our lodge competition, and even frigates were hovering around the balls of fish.  I won’t paint any pictures or try to glorify these scenarios, but it starts to get easier.  When you have small permit schooled up and they’re fresh to the bay, they seem gullible and are very easy to catch.  It’s almost embarrassing the press that follows permit in degrees of difficulty.  A big single bruiser in shallow water?  Yes, that fish is going to test your moral, skill, and bend your religious beliefs.  The smaller fish charge and eat flies with gusto almost like a bowl of candy on your doorstep at Halloween with the neighborhood army of kids feeding an addiction.  Brothers Chris and Jeremy Cox (or was it Jeremy and Chris?)  had a great week and had final closure after years of chasing permit in Ascension Bay and Belize.  The identical twins 27 permit between them and they landed 6 or so heftier fish over 10 lbs.  The duo was the life of the party for the week, and they had lot of fun catching double digit numbers.  Former NFL player and group leader Troy Bailey had yet to catch a permit and touched his week off with 12 landed permit with a couple of better sized fish.  Mike Matus, a humble student of salt had an unbelievable week fishing solo.  He didn’t have big numbers, but he landed a monster permit over 25 pounds with guide Alex.  All four nice permit for Mike were landed with Guide Alex.  This shouldn’t come as a surprise to anyone that has fished with Alex, a true Don and master of chasing permit. 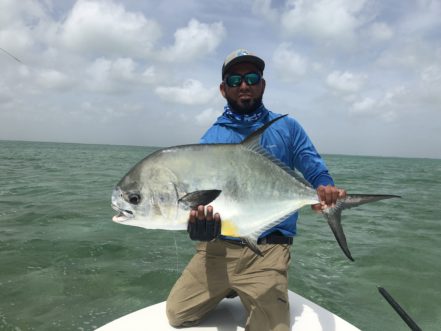 I’d like to provide clarification for situating and sharing our permit count with the world.  Do we catch more permit than any other flats destination? Probably and this is simply the result of one of the last strongholds where you will witness such numbers of fish.  Tallying permit is dubbed as a marketing tool and form of advertisement by some and if that lures you into booking a place than so be it.  Admittedly I find myself in that category at times.  I feel posting numbers and total fish counts aims higher and makes for a demand for a needed attention to conservation.  We use permit as a gateway drug for conservation awareness.  You won’t see these numbers elsewhere and the necessity for protection in such a place is beyond even the importance of angling.  As anglers the lure of catching permit draws attention, and we hopefully see global recognition by groups specializing in saving and protecting these places.  Should one lay importance and the significance of permit over the adorable boxfish?  From an angling standpoint perhaps, but the boxfish as well as the countless other fish and marine life that calls Espiritu Santo Bay home all deserve recognition as they cohesively exist.  It’s a special moment for us here at ESB and we seem frozen in time living in an oasis of unmolested nature.  I hope this place can thrive for years beyond our remembrance or existence. 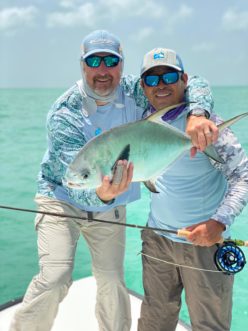 WEATHER/TIDES:
We had a strong incoming tide for much of the week and a very minimal outgoing which seemed stagnant a times.  Wind was from the southeast roughly at 15 MPH.  Mixed clouds with good stretches of sunshine were had beginning of the week and we finished the last day and a half with classic heavy summer rain and storms.

FLIES:
Nothing new here with our go to being Squimps, ESB spawning shrimp, and white or tan ESB crabs landing majority of our fish.

Toads and an EP baitfish contributed to the few snook and one tarpon landed.

Bonefish ate every shrimp pattern thrown on a size #2-#8 hook.

Carlos and the dream team that makes up our staff continued to cook outstanding meals and worked very hard to keep the lodge running in an orderly fashion. 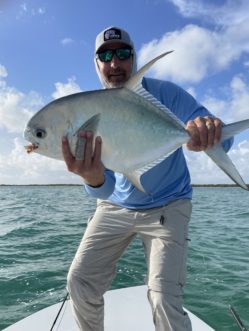 We’ve settled down for a fun week led by front man and dear friend Captain Billy Trimble.  Billy seems to be finding his name frequently in the newsletter this time of year and is kicking off his 2nd hosted week in a month with us.  We ‘ve got familiar faces amongst us, more than just friends at this point and Chiara and I had a blast last night with everyone at dinner catching up.  I’m eyeing my tarpon rod rigged and ready outside my door and I’ll stroll down the beach after we fire out our newsletter.  I hope everyone gets out at some point this week and waves a stick above their local water.  Please don’t hesitate to reach out to our friends at The Fly Shop if you have any questions about this special place.

Take care, conserve, and stay tuned for next week’s report. 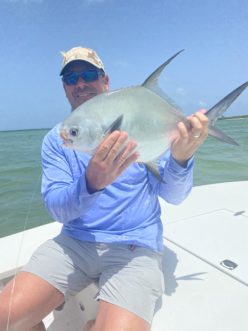