We’ve wrapped another great week here at ESB Lodge.  It’s an annual trip for the group to come down every October.  It’s always great to see Kevin Vincent and Ralph Smith again who also fished with us back in June/July.  A couple newcomers were touted along to join the gang for the week and it’s always a pleasure for us hosting new guests.  We at the lodge look forward to this group every year.  There were some cocktails consumed, every weather pattern known to man, and a couple fish landed along the way.

FISHING:
When guests arrived the previous Sunday, they were greeted with a calm ocean, beautiful skies, and zero wind.  The water in front of the lodge is incredible when conditions are like this and can also lead to some decent fishing.  Four hours after arrival there was a slight wind change and weather was visibly moving in.  Unfortunately, the bad weather stayed with us for the next four days.  I wouldn’t call it a complete shut out, but a frustrating scene every morning that was greeted with some ominous clouds full of moisture.  We had tough conditions with heavy rain at times and some thunder and lighting a little too close for comfort.

Obviously, this is less than ideal and not really what you mentally plan for a highly anticipated week of fishing.  I truly did admire the enthusiasm the group put forth and they collectively rallied every morning and made the most of what was put in front of them. 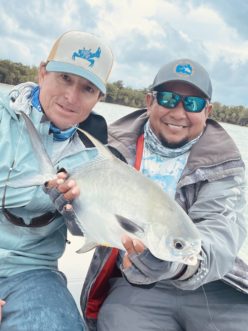 Our tarpon fishing is still strong and we’re seeing solid numbers along the northside close to the small fishing village located just outside the bay.  The entire shoreline holds groups of smaller tarpon in the 10-30 lb. class.  A couple small creeks located between river systems one and three were holding good numbers of fish as well as the “sunken boat” lagoon on the southside of Ensenada.  We had really high tides the beginning of the week and it was difficult throughout the rivers systems targeting fish that were buried in the mangroves.  The small creek systems that barely hold water were flush with water and had the perfect amount to hold tarpon, bonefish, and a plethora of snappers.

Vince Wiseman landed a beautiful tarpon that went about 40 lbs. with guide Pepe last Tuesday.  Newcomer Brandon Smith was with Fernando and boated a similar sized fish 30 – 40 lbs.  The tides finally dropped a little later in the week and we had a nice outgoing tide in the morning which made for more accessible tarpon to be found.  Ralph Smith was the high tarpon rod for the week boating 5 and the group landed close to 15 tarpon with many more hooked and jumped.

We were able to catch a couple snook that were nice sized, but it was a little tougher due to higher water.  Brandon Smith and Ralph each caught a snook a piece.  It has been a little unusual with the lack of snook that we normally associate with this time of year.  I mentioned some weeks ago I thought that we were going to be thick with them by this point in time due to some schools that showed up oceanside.  I hope we can get a solid week of north winds that will drive these fish into our system.  I made the comment the other day our weather patterns lately have been much more similar to late spring than mid fall.  We have very warm water and still battling some east winds which is not a normal occurrence for October or November.  It seems to me normal weather patterns are slowly changing and we are witnessing cycles and patterns that are not conducive to the seasons.  Last June we had impressive north winds I saw in my notes, and I hope we can slip back to the consistency we have become accustomed to. 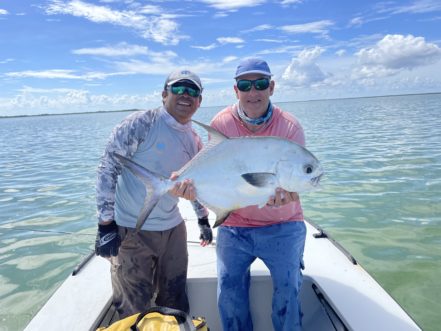 Permit fishing was tough due to the conditions but we were able to find a handful of fish with the end of the week being the most productive for seeing numbers and landing a few.  Tight to the southern shoreline on the southside an area we call red buoy and casita’s had schools of medium size fish that were difficult to catch.  Back in all the river systems we found a handful larger fish tailing and cruising the backcountry solo.  I was hoping we’d see more in the back of rivers one and two but we’re starting to see some freshwater leach out of the system due to a tide change bringing out freshwater from previous rains.  Jim DeCosmo and Henry Bone had a tough day but eventful throwing at a school for almost 2 hours unable to get them eat.  We saw this last week at times and it’s hard to explain the lack of enthusiasm permit are showing.  It’s as technical as it comes, and multiple boats threw into the schools and pulled a handful out on very small shrimp.  I was impressed one morning; Kevin Vincent was twisting up small shrimp on a size #4 hook without any yellow eyes and very slim profile.  It worked well and he caught a nice permit from the picky school the same day.

The fish that weren’t schooled up seemed easier to entice although we worked hard to find the singles which translated to standing hours on the bow for only a couple shots.  Ralph did well and got both his permit on small tan raghead crabs with white legs.  He was also able to complete a super slam with guide Alex.  Brandon Smith landed a couple permit throwing shrimp. 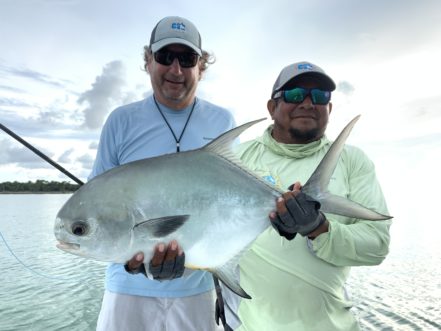 Henry Bone had a great day with Marcos and they poled through Ensenada putting time along the northern shoreline of the small bay and running the middle in deeper water.  They found a solid fish cruising and got it to eat.  Lot of time and effort went into a personal best for Henry and great job!  Jeff Honeck decided to wait until the last day with Fernando to land his permit for the week, another personal best.  They also found the fish deep in Ensenada and hooked it the last hour of the fishing week.  A great finish for the 6 days.  I suspect we will start to see more fish show up in Ensenada and it is well worth the time and effort to spend the time for a few shots at bigger fish.  This becomes an absolute mind game for the angler and is tough to justify at moments.  You have highs and lows and mentally work yourself into a big game of personal questioning.  The time you spend waiting for a shot feels like eternity and when the shots come, it’s over before you know it, you’re either successful or not.  The nagging feeling of eternity resumes and so you continue.  It’s truly a bizarre phenomenon devote permit gurus put themselves through and I really think it classifies an angler as crazy. 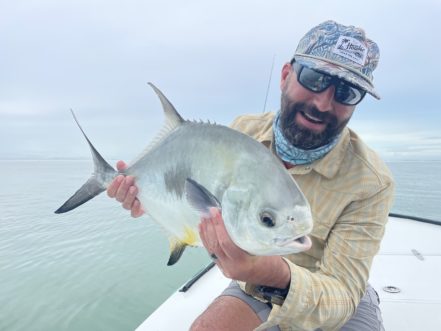 The group collectively landed a hard earned 10 fish for the week and this brings our season totals to 650 permit with 220 guests.

The group caught bonefish when targeted and we saw much better numbers along the northern shore and the entrance to river systems 1 through 3.

WEATHER/TIDES:
Weather was rainy and cloudy for much of the week with a northwest wind until middle of Thursday and we saw a reverse with a southern wind.  Tides were high the first four days in the AM and with the wind change later in the week we saw an outgoing in the AMChef Carlos and helper Luis worked hard to cook up delicious meals for all the guests and Emmanuel and the house staff kept the lodge up and running and made sure we were operating smoothly for everyone’s comfort.

We’ve got a fun week lined out ahead of us with a group of anglers that had been rolled over from the previous year due to the pandemic.  One angler made the trip all the way from Munich to try his hand at catching permit in ESB Lodge.  We’ve got some mixed weather in the forecast with some strong winds coming from the east.  It looks like later in the week we will see some north winds coming to play and hopefully less wind and protection along the northern shoreline. 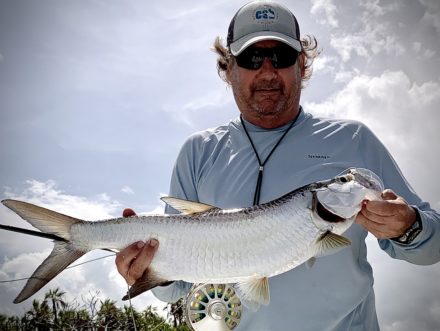 I hope everyone is having fun gearing up for Halloween and enjoying some sweets of their own.  I talked with my close friend back in northern Michigan and he informed fall streamer fishing and grouse hunting is “on fire”.  Please do yourself a favor and spend some time outdoors and enjoy the colors mid fall can bring.  The transitional month before winter is one of my favorites and it’s a great time to be outdoors.  If you remember, shoot our friends at The Fly Shop a call and check in on us.  They’re up to date with the latest info and are eager to keep you informed.

Please go carve a pumpkin and stay tuned for the next report! 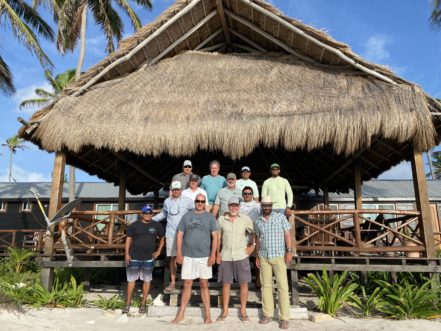