We have had a great week down here at Espiritu Santo Bay Lodge filled with permit, amazing food and some delicious oceanside cocktails. We were excited to show the lodge to a group of seven anglers that were new to our remote flats fishing operation. The group quickly realized how deep in the jungle we are after the slow, bouncy car ride from the airstrip to the lodge. The southeast wind made for yet another
challenging week of presenting the fly to permit in open water. All said and done, the group landed great numbers of permit, with many others hooked and located. The kitchen staff prepared wonderful meals full of flavor, while the guides worked hard chasing permit all week long. 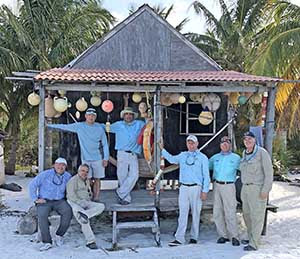 Permit fishing was the main focus for our guests this week. Most days were spent chasing large schools of fish in deeper water, with the occasional sighting of a single tailing permit on shallow sandy flats. The bay was alive with some very large schools of permit. Just about every day, the boats came across huge schools with 50 – 100 permit in them. At times permit were plucked out of these schools with ease. During other encounters, frustration dominated the bow of the boat as fly after fly were changed out to no avail. With the wind coming from the southeast, mornings were spent on our “house” flat located close to the boat launch. This allows us to fish with the wind and the sun at our backs. Many fish were located in this same area in the late afternoon. The shots in the afternoon proved to be more difficult, as the boat had to be polled into the wind so the sun was at our backs helping the guides to see the fish. None the less, we managed to hook into a couple of late afternoon fish throughout the week, just minutes before the boats returned to the launch. One aspect different about this week from others was the amount of permit caught on crab patterns. Typically we find the shrimp patterns to be more effective for these schooling fish, but this week they seemed to be keyed in on the crab. One benefit to the crab patterns that persisted throughout was the reduced number of small jacks and blue runners grabbing the fly before the permit could get to it. It seemed these smaller fish were much more reluctant to take the crab, allowing a bit more time for the permit to locate the fly and eat. It will be interesting to see if this trend continues into the following week.

Six out of seven of our anglers landed permit, with three catching their first ever on the fly rod. This week’s anglers were impressed by not only the size of the schools we were locating, but also the size of the permit within these schools. We noted that many of these schools were made up of fish in the 15 to 20 pound range. It’s an impressive and exciting event to witness these big fish interacting in such large numbers. Guest Rocklan Lawrence came to the lodge with limited saltwater flats fishing experience. He enjoyed spending the first couple of days learning the ins and outs of hunting bonefish on the flats. Once he’d fine-tuned his skills, he was on the hunt for his first permit. Rocklan had multiple encounters the following days with fish chasing, subtle takes, and the disappointment of failed knots. He set out on Saturday for his final day of fishing, and was able to make it all come together. Not only did Rock land his first permit, but also his first tarpon! What better way to wrap up an awesome week of fishing than with a grand slam! Our total for the week was 9 permit landed for 7 guests. This brings our season total to 186 permit, with 133 guests thus far. 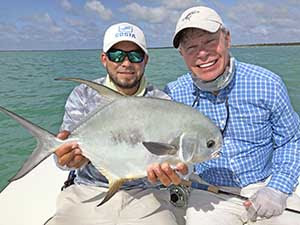 With permit being the main focus of the group, much less time was spent searching for snook and tarpon. I believe our water in the bay has leveled out quite a bit, and there is potential during the right tides to have a productive day chasing these species. A few schools of large tarpon were spotted in the distance while searching for permit on the ocean front flats of the bay. Calmer winds this coming week may allow better conditions to chase these large migratory tarpon.

Bonefish were located in large numbers in the shallow sandy flats of the bay. I constantly stress how enjoyable it is to spend a couple hours during of one of your days to wade for bonefish. Often times you will be trying to quickly unhook one bonefish so you can get ready for the next target tailing its way towards you. 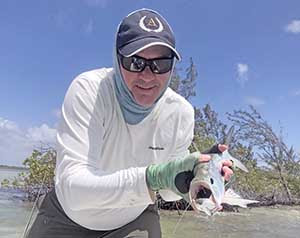 While the heavy to moderate southeast wind persisted last week, there was plenty of sunshine. Casting was of course difficult in certain situations, but we were happy to have ample sunlight to assist in locating fish. We continued to see tide fluctuations of only a foot or so, rising until late morning and then falling for the remainder of the day.

FLIES:
Tan and white raghead crabs in size #4 were responsible for most of the permit caught during the week. Heavy yellow dumbbell eyes and white legs in a simple crab pattern proved effective. Spawning shrimp and the #2 Tan Squimp were used for permit as well. Bonefish were taken on a variety of shrimp patterns in size #4 – #8.

The kitchen staff was right on que this week presenting delicious cuisine to our guests. The house staff was always present to ensure full service and comfortable accommodations. 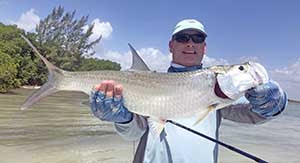 We are very excited for arrival of six guests to the lodge this upcoming week. Keith Smith will be returning for his third visit to the lodge. Joining him will be his friends Gustavo Heibaum and Dan Etcheverry; two Argentinians who run a trout fishing operation in San Martine. They have just recently finished their season, so we are excited to show them this incredible operation and get them on some world class saltwater flats fishing. We hope they will enjoy the transition from dry fly fishing pristine rivers in Patagonia to sight fishing the flats of Espiritu Santo Bay.

We hope you have a great week and don’t forget to contact our good friends at The Fly Shop to inquire about this unique flats fishing destination. Make sure to stay tuned for
next week’s report!

Please stop in or give our friends at The Fly Shop® a call for more information on this work class fly fishing operation.  Stay tuned for next week’s report.