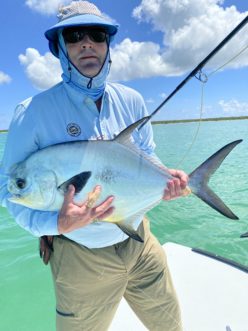 Another fantastic week was had here at ESBL, it fairly flew by with the accompaniment of 8 anglers.  We had the pleasure of hosting new guests along with some familiar faces that have made the annual trip to the Yucatan.  It was a face paced, hard charging group, good fishermen, that complimented the opportunities our bay provided.  We had some fantastic fishing, a few anglers hitting personal bests, and all around an enjoyable group that cherished their time with one another.  We at ESBL work so hard to meet expectations, rise to challenges, and cultivate an angling experience that will stay with you forever.  By Sunday everyone was dog tired, dirty, sun burned, and grinning.  Battle worn, with deep grooves in your fingers from stripping and setting on fish is the proper send off as you navigate your body and mind back into your normal daily life. 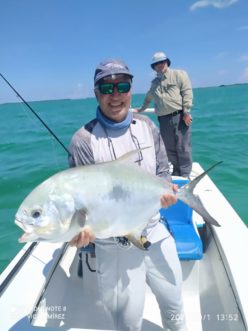 FISHING:
I’m trying not to repeat to much of what I say in each fishing report.  If I am I apologize, and please take it as a good sign.  Repetitiveness with positive results is never a bad thing.

We’re on a serious permit kick here, right where we left off at the end of the previous week.  They’re loaded in the bay, with boca’s (bay entrance) holding multiple schools of fish.  We have schools of all sizes, from little 5 lb. permit, upwards to 20 lbs.  It’s important to see these staging fishing in all age groups, and it becomes symbolic of a well-rounded fishery that’s healthy.  We had days where were able to find them and couple days middle of the week, they slide off to deeper water for a quick minute.  Why?  Who knows and I’m assuming we’re in the midst of spawning cycles.  They spawn, then return hungry perhaps. 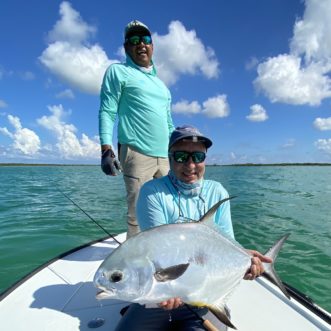 Sekhar Bahadur and Joe Deatherage had an epic first day on the water with Victor as their guide.  They landed 8 nice fish from a school both hitting personal best for number of fish landed and size of fish landed.  Sekhar is renowned caster, great angler, and has traveled the globe chasing fish.  He also got a super slam later in the week with Alex.  Joe landed 6 permit total for the week and Sekhar landed 11 total.  Clark Smith and Cole Burnham, both fly shop owners out of Sheridan, Wyoming started off the week with Alex and landed a ridiculous 9 permit.  They each had 8 permit for the week and a grand slam a piece.  Bob Conrads and Charlie Ruffell joined us for their first week at ESBL.  Bob landed his first two permit ever the first day with Fernando and tallied 3 for a weekly total.  Charlie, another fishing fanatic and globe trotter had a great trip with us and landed 5 permit.  This was also a personal best for him and we’re at the drawing board planning his return next year.  Close friend Unk Smith, a tarpon guru who has been fishing the bay much longer than I have returned this time with his son Chip.  Chip is a fantastic Tarpon guide out of Florida and was happy to trade some platform time to fishing from the bow with his father.  Father and son dynamics are always fun and there’s a level of expectation and desire for each other to succeed.  I carry this weight mightily and relate very much with my own favorite fishing partner, my father.  Chip nailed 3 permit under the watchful (and suggestive) eye of his father. 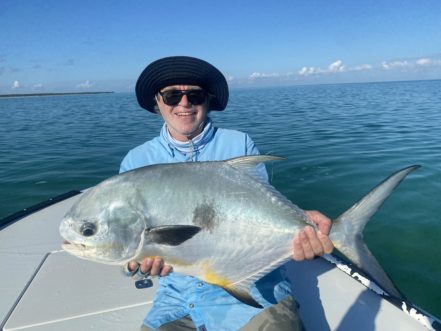 The north side of the bay is beginning to see decent numbers of permit show up and the flats that sit in front of river systems 1 through 3 are holding fish.  My favorite spot right now still sits in the deep southwest corner of the bay where a long sandy strip finishes beautifully in a transitional zone of a channel and flat.

Permit numbers for the group of 8 guests this past week hit 45. Our season totals reside at 631 permit landed with 206 guests.  We have landed 102 permit in the last two weeks with a total of 16 guests.  This is just a staggering number of permit, and I’m hearing some spectacular catches from our neighboring bays to the north and south as well.  Southern Yucatan has been extremely fortunate to enjoy some fantastic weather and fishing the last few weeks.

Tarpon and Snook were placed on the back burner for the week.  I suppose with solid permit fishing one must take advantage of current conditions.  The tides were acceptable for both adversaries and I’m sure given the chance we would’ve landed more.  Northern river systems are clean and holding lots of bait.  Outside the bay, we’re seeing big schools of snook beginning to migrate their way into the fishery.  This is lining up to be a fantastic fall for snook and I’m hoping it’ll get better and better with consistent north winds.  I am not sure where these fish come from, but I assume they are following schools of bait off the reef system, locked into ancient migratory patterns that define impressive movements of fish. 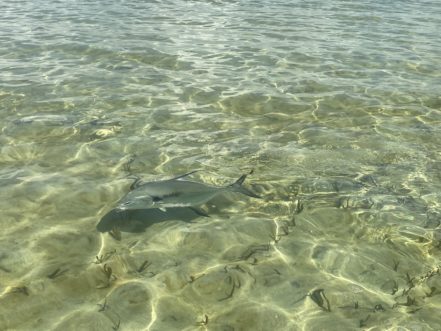 Unk and Chip being the tarpon gurus they are, spent a day away from permit (thank god) and dove into the backcountry on Victor’s boat.  They had a remarkable day chasing tarpon and snook.  Unk landed a massive snook at a solid 20 pounds along with 4 tarpon.  Chip damn near lost count landing 10 tarpon and a snook.  I don’t want to know how many were jumped and lost.  That’s an impressive day on the water by any stretch of the imagination.

Bonefish are indeed around cruising all our flats both north and south.  The bigger ones seem to be picked up along the northern shoreline outside of the bay.  This is also an unusual phenomenon we can’t explain.  When north winds begin to bring the fall season upon us, we see a different bonefish show up.  They share all the same characteristics as our other bonefish, they’re just much bigger, stronger, and much more silver in color.  You got to try a day on the north side chasing incoming snook intermittent with smaller schools of these bulldog bonefish.  They share the same flats and are so much fun to chase as you’re trying not to whack your fishing partner’s head while swapping between fly rods.  We will also see these fish show up in front of the lodge and a mile or south along some sandy beaches aided by a strong incoming tide. 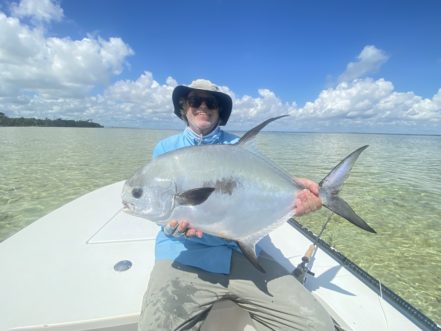 WEATHER/TIDES:
Solid weather for the week with a light sampling of everything.  We had sun, partly cloudy, completely cloudy and a general mix every day.  Winds for the week were mixed with a couple days of eastern breezes but mostly dominated by light north winds, a wonderful compliment to early fall.  Tides were crazy high for the week, with our normal low already being at the level of our normal high!  Make sense?  “Low” tides greeted us in the morning but rapidly coming in.  We saw a slack late morning and then a very drawn out drop in the afternoon.  This is a little unusual for us and not quite normal.  I think we have various tropical waves and depressions that have dissipated further east in the Caribbean but still carry a good amount of water.

FLIES:
Crabs with yellow eyes seem to dominate the menu for permit for the week.  A handful of spawning shrimp and some homegrown variations tied by guests also contributed to landed fish.  You got to pay attention to this part of the newsletter.  When there’s been 8 consecutive weeks of the same fly showing up in the report, perhaps you should splurge with buying AT LEAST a dozen winners.  Food for thought and take it as you may.

The Tarpon and Snook were caught mostly on personally tied flies from Unk and Chip and had similarities to our normal palate of colors.  Blk/purple, blk/red, white/grey, yellow toads and EP style baitfish all were and continue to be successful.

Bonefish, you’ll never guess but they ate any shrimp imitation thrown at them in sizes #2-#8.

Carlos and the kitchen crew are nonstop and putting out too much delicious food.  I’m trying a diet and it’s going terribly…  The ground staff is keeping things operating smoothly and always putting guest needs first. 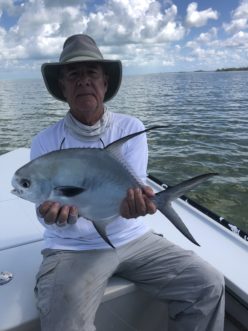 We’ve got a fun six days ahead of us with a great group of guys.  The Cape Code gang has taken over the lodge in a highly anticipated week.  Front man Vinny Foti leads the group of eight and these guys are a blast.  I swear they were counting down the seconds upon arrival for their week and are over the top with excitement and anticipation.  I probably could’ve served breakfast at 4:30 AM this morning with everyone wired to go fishing.  It is a questionable group though; they allow a limited amounted of members and are leery of others.  I keep hearing about monthly meetings that take place in dark rooms of restaurants with undisclosed zip codes scattered along the Massachusetts east coast.  They carry accents thick enough to chew on and I couldn’t be any more excited to host the gang of hoodlums.  We’ve got solid weather lined up for them and I’m confident they’ll find a fish or two.

I hope your beginning of October has been as great as ours and you find yourself at some point getting outside and enjoying it as much as possible.  If you’ve got a minute check in with our friends at The Fly Shop to get the latest on ESBL or wherever you may be heading on a local or international trip.  Please stay safe, get outside, and have a great week.  As always, stay tuned for the next report!