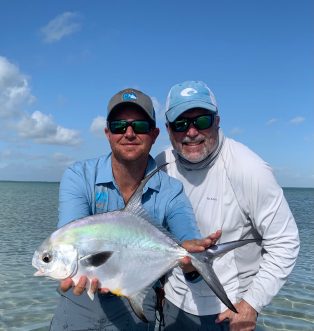 We’ve enjoyed a wonderful first week of our 2022 season here at ESB Lodge.  It’s hard to believe we’re beginning our 6th season and we’re excited for the new year ahead of us.  ESB Lodge is a proud operation, and we are so lucky to share such an incredible place with so many friends and guests.  It’s a long season, 38 weeks to be exact and as we scan through the sold out yearly calendar, we see familiar names every week of the season.  I can’t really find myself referring to our returning guests as clients, as they have become embedded into the yearly mold and have become part of a tight group of friends, we enjoy so much hosting. 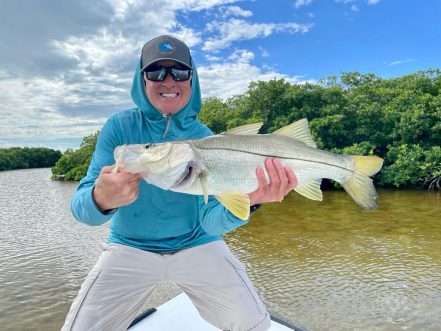 A proper season couldn’t start without seeing some familiar faces and couples.  The father son duo Conner and Dave O’Leary, Michael Hostetler, Charles Mangum, and of course Bill and Laine Forester all graced us again with the kickoff to a new year.  It was a fun week and for the first time in 6 years I personally got to fish 6 days in a row.  I was impressed with the opportunity and had a great time on the water and have discussed with Chiara that perhaps we might be making this a yearly tradition.  Her response wasn’t immediate, and I suppose my performance this up coming week rapidly trying to catch up with some neglected emails and tasks will determine this over time. 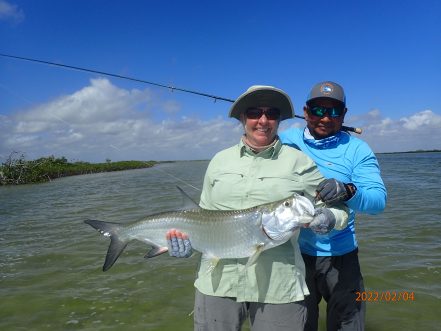 We had a typical mid-winter week with some strong winds, varying tides, and cooler temps.  I was happy to see the wind change throughout the week, coming from every direction except west.  This granted us access to both the north and south side and gave everyone a nice mix of opportunities. 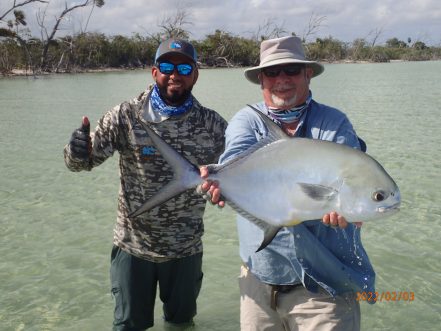 FISHING:
Overall, the fishing was solid and I think a little better than previous opening weeks we’ve had in the past.  With stronger east winds and cooler temps, the bay historically isn’t filled to the brim with fish as one might see in June.  Being open minded and willing to chase all our species keeps the angler busy throughout the day and one abundant species can quickly fill the void of another that seems nonexistent at times. 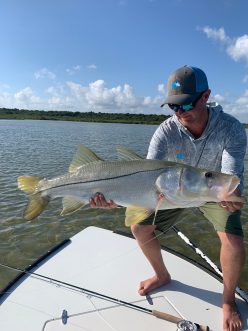 Bonefish, my heroes of the fishery were out in full force and evenly spread throughout the river systems on the northside.  We saw them concentrated at the openings in large schools and the schools gave way to bigger fish the further you went into the backcountry.  If you put emphasis on catching bonefish, you will be guaranteed shots at some 5 pound plus fish.  I have raved over the years about our bonefish and will continue to do so with gusto.  These fish have continued to get bigger and with almost 10 years of nets being banned here we have been lucky to watch this fishery blossom into having the largest bonefish in Mexico or even Belize for that matter.  My first day out with Charles we fished a Scott Sector 7 weight and had a blast with multiple fish peeling line to the backing and some.  I boated a great fish that was tailing alone amongst some mangrove shoots in a small, protected bay in second river.  The fish was a solid 6 pounds and was a thrill with a lighter rod.  All guests that chased bones were rewarded and these fish should remain a solid staple for everyone this season.

Cooler water temps and east winds make for tougher permit fishing.  This isn’t a time that you see millions of permit but you’ll have a handful shots throughout the week.  The southside is our stronghold for seeing permit and this trend will continue as we approach the spring season.  We saw some smaller permit on the northside schooled up in the river systems but not in great numbers.  Bill Forester was able to get a small fish the first day out with guide Victor and he appropriately rounded out his day with a grand slam.  Later in the week along the southern shoreline Bill was able to land his largest permit to date with guide Alex.  Conner O’Leary landed a small permit the second day and was able land a beautiful fish, a personal best with guide Marcos that also translated to a grand slam.  My close friend Charles got into a school of smaller school in very shallow water that were aggressively feeding and hooked up with an eat less than 10 feet from the boat!  We had to put time in to see some larger permit but as the week warmed up, we saw more fish.  The day Conner and Dave were out with Marcos they saw more than 50 decent size fish close to the lobster village.  They were a mixed bag of schools and singles riding a tidal change.  I was a little jealous of the number of seen fish.  I had plenty of shots myself and was successful with landing two nice fish with Victor and then Fernando the following day.  Throwing weighted shrimp and crabs into a 20 mph wind is a daunting task and can quickly morph into a breakdown of nerves.  I shouldn’t let it bother me, but I still do and find myself just as excited casting to a permit as I did for my first. 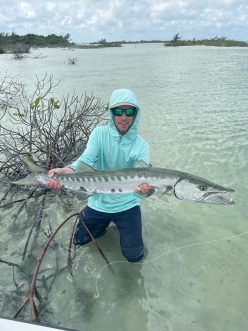 We were with Alex for a day and chased three schools around red lagoon for almost three hours.  They were smaller fish, and each school held at least 30 fish.  They were very spooky and would time it perfectly to slide out of range when the guide called the shots.

Marcos and I went on a scouting mission to Ensenada to look for permit.  This really isn’t the time of year to focus on that flat, but we were curious, and it felt right.  The wind was howling, and the water was a little stained, but we saw some fish, more than I expected.  Both Charles and I were humbled with a balancing act on the bow and casting into the wind.  We managed a couple decent shots, one shoulder was hooked, three fly changes, and we ended with nothing.  It was a laughable moment altogether and good to see some fish showing up.  As I mentioned we should only see more numbers show up in the following weeks as water temps warm up and we hit a consistent stride with wind direction.  This also the time of year where we see big stingrays show on the flats to spawn.  There’s an interesting relationship between rays and permit and I expect we’ll see more permit riding on the coattails of this annual phenomenon. 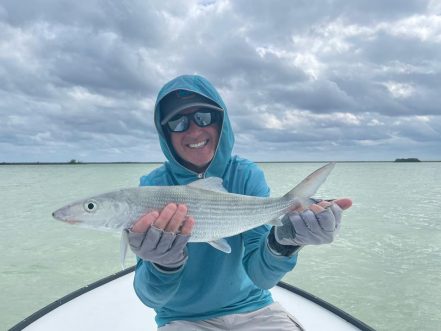 All of us combined caught 7 permit for the week which launches us into the new season.  It will be fun to watch our permit numbers this upcoming season especially after an incredible 2021 season.

Tarpon were EVERYWHERE.  I could not believe the numbers of tarpon we saw.  They weren’t concentrated in one spot but holding in all our normal haunts both north and south.  Rivers one and two held fish, small creeks inside river three, as well as the backcountry deep in the southside rivers.  I have never seen so many tarpon here this time of year.  Everyone had multiple shots with some days guests saw around 80 different fish.  When you look at the number of tarpon landed for the week one must keep in mind it’s probably one tenth of the number of jumped fish.  Charles was able to land his first tarpon with Victor, a fiery 5 pounder that tried to tangle itself in every mangrove around.  Laine had a fun tarpon day with guide Fernando and she succeeded in landing her largest tarpon.  I have to hand it to Fernando, he’s the tarpon whisperer.

Out of all our targeted species snook seemed the most elusive and when we found them, they were in typical fashion of ignoring most of what we were throwing.  Halfway between river one and river two held some snook that were holding tight to mangroves.  After a couple missed hook sets Charles landed his first snook with Marcos and Laine also landed a very impressive snook with Fernando.  The day Charles and I shared with Victor I got an EP baitfish in front of two large snook and hooked up.  The fish didn’t seem big from the angle of the eat but after watching the fish take backing off my 8 weight we quickly realized it was massive.  Luckily it was open water, and we had the luxury of letting the snook run wherever before finally landing it.  It grew as we lipped and hoisted it up for a photo.  This was one of my largest snook I have landed from the boat and with out a doubt weighed a solid 20 pounds.  We couldn’t believe the girth of the fish.  A very special fish and a great sign that the fishery supports snook like this and the opportunity they have to grow to this size.  Of course, I was informed by Victor that I hooked the smaller of the two and it only seemed natural.

WEATHER/TIDES:
We kicked off the week with strong east winds at a 20 mph with an incoming tide for most of the day.  Later in the week wind slid from the northeast and dropped off.  This change adjusted the tides to low in the am but still incoming.  We had mostly clouds and sun with more sun showing up later in the week. 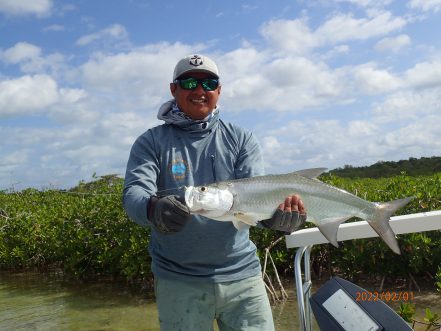 Toads, EP baitfish in a variety of colors worked well for tarpon and they seemed to be willing to eat most of our offerings.  We noticed darker water needed darker flies, and it helped to have more natural colors when the water was clear.

Bonefish readily munched any properly presented shrimp tied on with weight that corresponded to the depth we were fishing to them.

Chef Carlos is back in the kitchen with our A team cooking up a storm.  In his time off he tried some new dishes and was excited to have them at ESBL for the new season.  They don’t disappoint, and I have all the confidence in our crew for the new season.

Emmanuel continues to lead the charge taking care of the grounds, and small mishaps that elude our attention prior to opening.  He is such a solid figure with us, and I am very excited to have another year with his watchful eye.

We have 8 anglers on the water as I type this out and it’s great to see Blackwell Smith leading the charge and bringing some new friends along for the experience.  There’s a mixed bag of weather conditions in the forecast but I’m confident we’ll have another stellar week. With the new season upon us please take a moment and call our partners in crime at The Fly Shop.  Their up to speed with updated planners, protocols, and the overall happenings here at ESBL.  I am forever grateful and excited to have another year upon us and couldn’t be more excited to have them alongside us.  I hope everyone has been enjoying their 2022 as much as we have, and I encourage you to get outdoors and make the most of what’s shaping up to be a wonderful year.  Stay safe and of course, check in with us next week for another report. 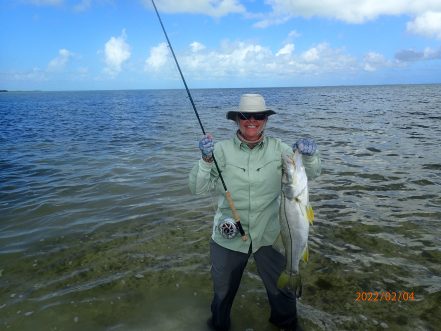