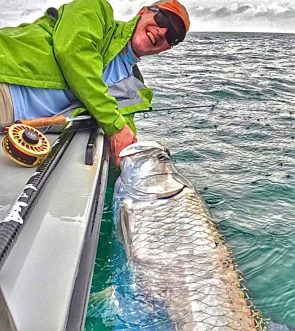 This week the weather was the main protagonist, the influence of the hurricane on the Pacific side of the Yucatan Peninsula generated a very unstable climate over the Sian Ka’an reserve area and almost the entire southern Atlantic coast of Mexico.

We had days with dense clouds, moderate rains, copious at times, and some uncomfortable winds for the first days of the week.

All of this meant that the fishing conditions were not the best and we lost a day of fishing due to bad weather.

Visiting us this week was Mike McVay, Scott Sanderson, Dan Appling, Daniel Meyer, Dick Meyer, Steve Dyer, Christ Cedar and Gordon McHaney, all of them good friends with each other and fishing with us for years.

Despite the unfavorable conditions on the first day of fishing, Mike and Daniel landed their first permit with Fernando and Marcos Neri as guides respectively.

That same day Gordon landed a beautiful tarpon under Victor’s guidance in the deeper waters surrounding the island at the entrance to the Bay. 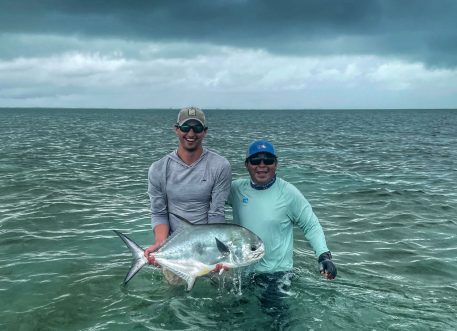 In the middle of the week, when Hurricane Agatha went down in history, its remnants scattered across the Peninsula, only to reform in the Atlantic as tropical storm Alex. That gave us more clouds and constant variations in the direction of the wind but with speeds much lower than those generated by the ​​influence of Agatha. Finally the fishing conditions turned favorable.

Taking advantage of these conditions, Daniel managed to land his second Permit of the week, under the watchful eye of Marcos Neri.

The activity began to slowly intensify in the bay as the weather improved just as quickly, giving the first permit to Steve, who managed to land one and narrowly missed out on the photo of the second with Fernando assisting.

Scott and Dan added one each to their accountants with Marcos Neri as a guide and in Dan’s case the first of his life and as is tradition we celebrated before dinner.

Welcome to the Club Dan! 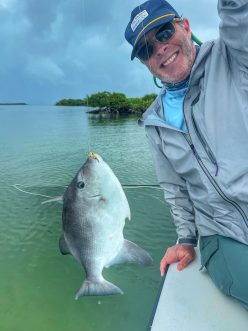 Tarpon activity was very noticeable during the last days of fishing in the bay, which led several of our guests to concentrate their efforts on them. Daniel was able to connect with a large tarpon and after a long fight it managed to escape.

Jacks, blue runners, trigger fish and snapper were also on hand this week to complete the fishing menu.

We closed the week with a total of 6 permit to hand with 8 anglers, which brings our season numbers to 280 permit with 132 guests! 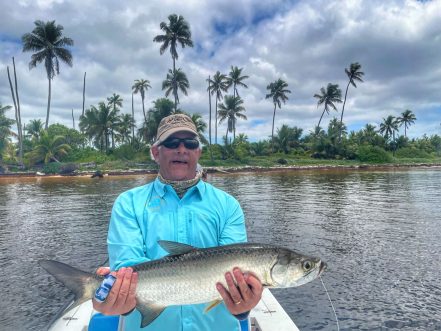 The bonefish at shrimp and crab patterns in sizes no larger than #6.

Medium sized baitfish, EP style, were chosen by the Tarpon as usual in all the wide range of colors that this type of patterns usually present. 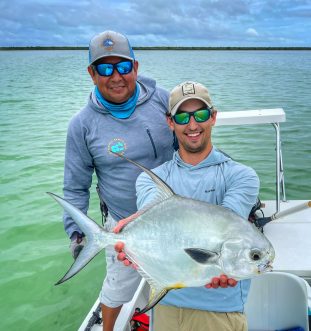 Weather
As I mentioned earlier, constant variations in the weather were the protagonists of this week.

Moderate winds rotating from the East, to the Southeast and then rotating again to the West and Northwest, considerably lowering their intensity.

Mild to moderate rains at times generalized or isolated throughout the bay during the first four days of fishing.

The presence of electrical storms at night gave us a show of lights and sounds to liven up the evenings.

At the end of the week, it was our guide Alex’s turn to rest, our Sous Chef Luis returned with his batteries fully recharged and ready to go, together with our Chef Carlos, create true delicacies for our guests. 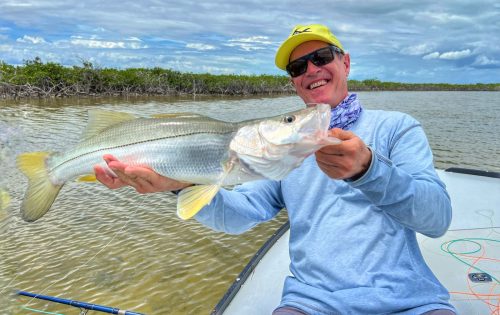 Emanuel, Freddy and Pancho are fundamental parts of this excellent work group that give 110% so that our visitors have the best week.

I’m testing the limits of Isabel and Carlos’ abilities to meet the needs of the lodge and our guests; we’ll see what strange request I come up with this week.

I’ll be back next week with a new report on the adventures of our next seven guests and because that’s what the ESB Lodge experience is all about. As my grandfather said “fishing is not just catching fish”.

Do not hesitate to contact our friends at The Fly Shop so they can tell you first-hand what life is like in Espiritu Santo Bay, the Sian Ka’an Biosphere Reserve (which means “Where the sky begins”, in the language Maya) 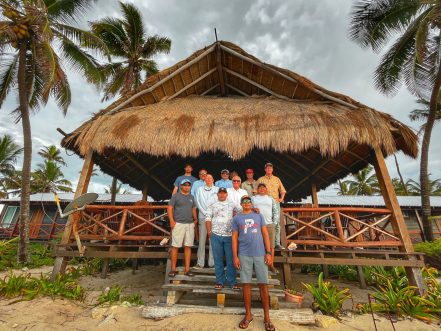