The Grand Slam of Swing

The Grand Slam of Swing
by Justin Miller

I learned how to cast a Spey rod to swing flies for steelhead. Steelhead are hands down my favorite target species, and there is no other option to the method I prefer. Once I started swinging flies with a Spey rod, there was no going back. The efficiency of Spey casting is hard to argue against. They basically cast farther, with less effort, more often. Spey casting covers the most water in a day when fishing for anadromous fish. The calm rhythm of casting a two-hander all day is also hard to beat. I find a smoothness in the method that is hard to maintain while launching steelhead tackle with a single hand rod. 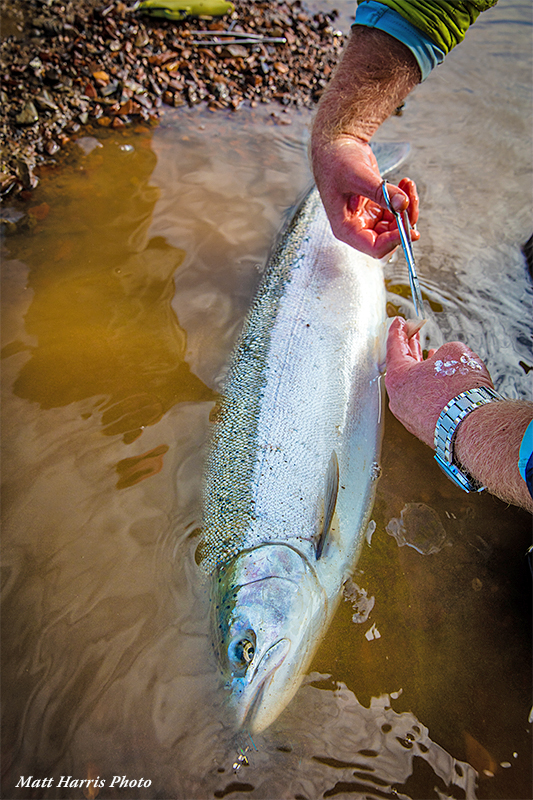 The tight line tug though is what keeps me swinging … It is addictive. There is no sweeter feeling in fly fishing than a swung fly being taken by a sea run monster in a river.

Steelhead got me hooked, but as I became more and more mesmerized with the two-hander, I found myself traveling all over the planet in search of other anadromous fish that had a tendency to grab flies on the swing. I found out really quickly that there are a few other serious players in this game.

This is the Grand Slam of Swing: steelhead, chinook, Atlantic salmon and sea-run browns. All of them are badass. They all have a hardcore following of dedicated anglers, and each species dominates on a certain part of the globe during certain times of the year. Any Spey caster who loves one is sure to love the others and getting to shake hands with all of them should be a priority of everyone who swings. 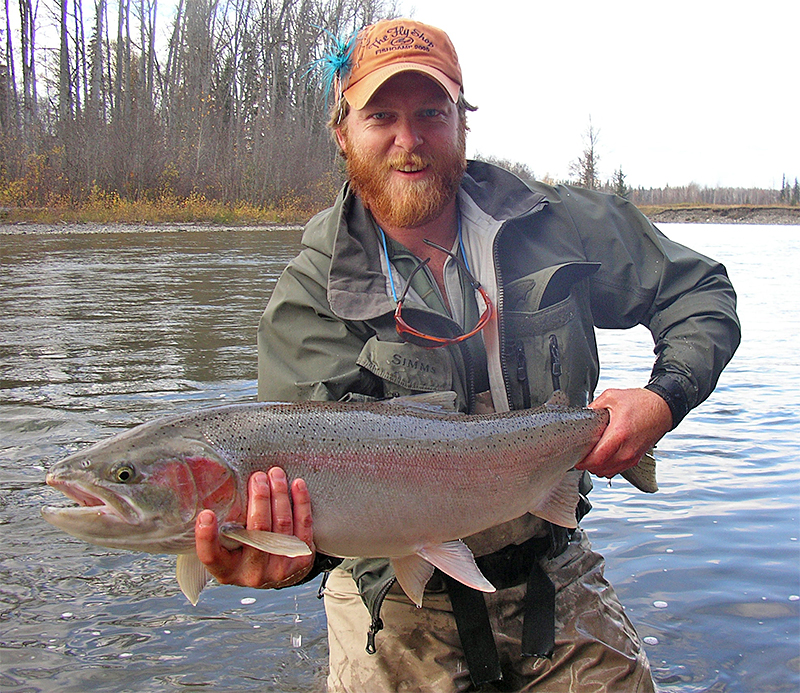 Steelhead – The Spey casters’ go-to choice in the Pacific Northwest (and Pacific Far East). Unbelievably adaptable, we chase them virtually every month of the year, from the redwoods of California to the rain forests of Canada, from the tundra of eastern Russia, to the high deserts of Idaho. Frozen rivers in January and near boiling in July, we can find steelhead around the Pacific’s Ring of Fire whenever we get the chance to wander. Steelhead are fantastic … These sea-run rainbows are super curious to the swung fly and super unique in every drainage. They can average 3 pounds in one river and 30 miles up the coast average 15 pounds. Steelhead anglers will cast rods from 6 weight to 8 weight for them, depending on the river, time of year and size of fish. Steelhead smoke skated dries in the summer and fall in gin clear water and crush huge intruders on deep sink tips in water with virtually no visibility in the winter. They can hit it like a freight train, or just barely pluck at the fly. They can run as fast as any fish in freshwater and burn up reels, or dog down and play tug-o-war in the current. They are notorious jumpers, but not all the time… Every river, every time of year, and every fish has its secrets to unlock, making them the ultimate year-round swing fish of the Pacific. 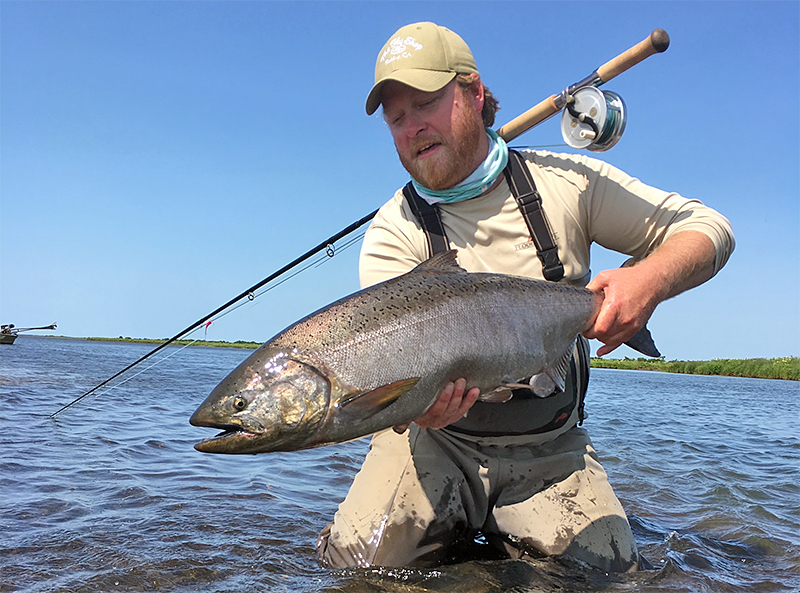 Chinook (Kings) – These are the monsters of the group. Kings top the chart in size, of all of the big four, with world-record specimens nearing 100 pounds. Also indigenous to the Pacific rim, the native range is very similar and overlaps with steelhead. Chinook are also very adaptable to different river conditions and times of year, but most of the great fly-targetable runs are in the spring through the middle of summer. Finding rivers that are good for swinging for kings is the trick. Chinook swim many rivers but finding the rivers where the fish hold in moving water that is not too deep and relatively close to the sea are the ingredients for success. The brighter the better with kings. They take flies better and fight harder the fresher they are. They are actually very grabby when you get the right conditions, and fresh fish on the tide can wear you out. Get the fly right down in front of them with the sink tip; they are not known for rising in the water column to the fly like some of the others. If you figure out how to get the fly in front of them, they will pound it. The fights are down and dirty. Hard runs and pit bull head shakes are excellent at breaking things like leaders, reels, rods and fingers. Gear up with 9 weights or 10 weights and be ready to pump them up and reel down like a tuna. These things are crazy tough, and super strong. They don’t call them “King” for nothing. 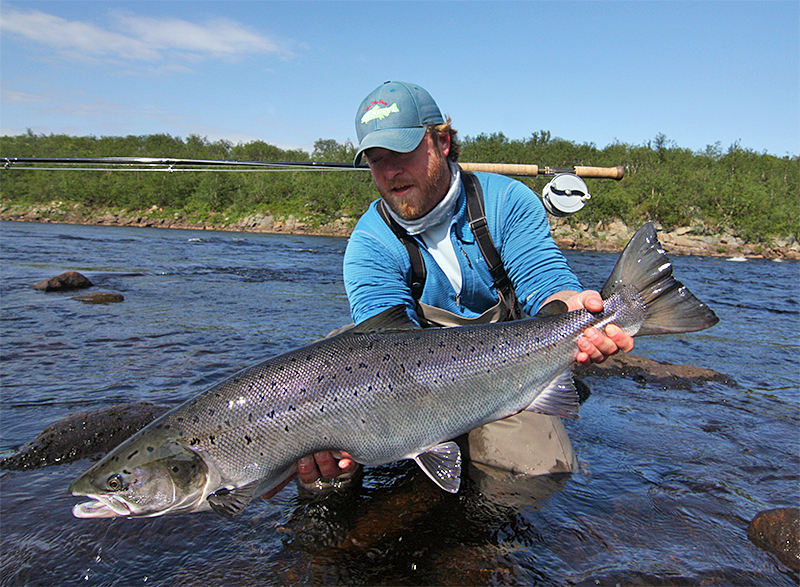 Atlantic Salmon – Atlantic salmon have a following as reverent as steelhead do, and for good reason. These fish are made for swinging. They move very aggressively to flies and will rise right to the surface for floating line presentations. They can also get on an entirely different scale of BIG, compared with steelhead, with fish over 60 pounds taken on flies. Just like steelhead though, not all salmon rivers produce huge fish. Some just have tons of 5+ pound “grilse” by the thousands. Others have straight hawgs but lower numbers. Their native range is the North Atlantic with their surviving strongholds being Eastern Canada, up and around through Iceland and the Russian Kola Peninsula, and down into Norway and the UK. The main season throughout the range starts in spring, as soon as it ices out up north and runoff calms down some. The fish keep running through the summer and into the fall. Just like steelhead fishing, you’ll need to adapt to conditions. High cold water in the spring may require sink tips and larger flies, but as soon as the water drops and warms by early summer, get ready to skate them up or run wet flies on floating lines. Atlantic salmon can be very aggressive and when hooked will go ballistic. Named Salmo Salar, the leaping salmon, they are notorious jumpers and can have blisteringly hot runs. I almost broke my thumb when my reel was literally smoking on one fish I tangled with. 10 weights are a good idea with the big guys – you just never know when you are seriously going to need it. 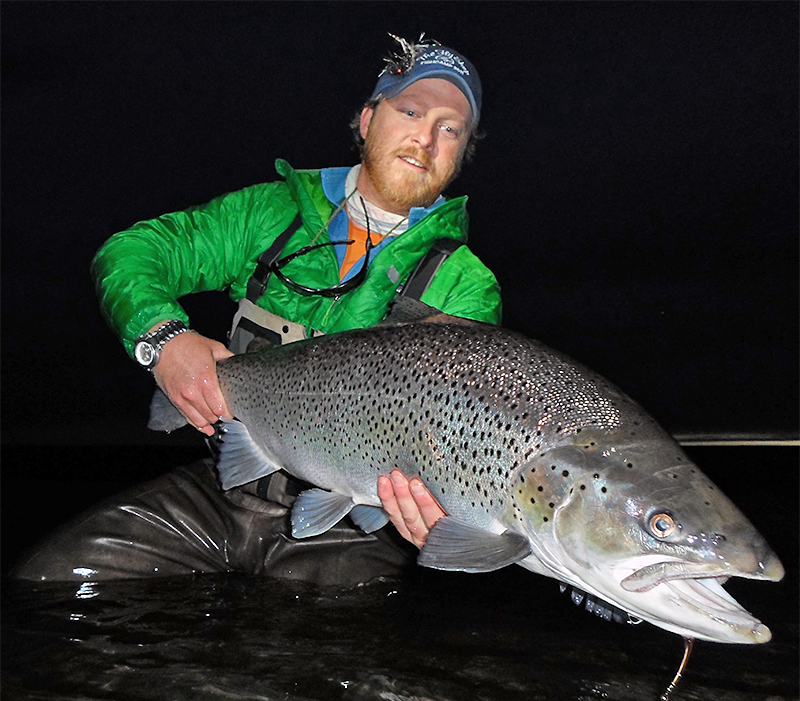 Sea-Run Browns or Sea Trout – Unfortunately, these have been severely depleted in their native range. They once were very prolific in the North Atlantic, occupying the same rivers and range as the Atlantic salmon, on the European side of the Atlantic. Sea trout can still be found and targeted in Europe and all the way through the Kola and into Iceland, but even the most die-hard sea trout anglers have told me they put in hundreds of hours of fishing at home every season in Europe for only a few fish a year over 10 pounds. It’s just not what it once was. Sea-run browns were introduced to Argentina in the 1930s, and now the island of Tierra Del Fuego is known as the finest sea trout fishing on the planet. The Rio Grande River is home to a population of fish numbering over 60,000 returning adults annually, and the largest specimens are knocking on the door of 40 pounds. They enter the rivers of Argentina in about November, and fishing is predictably excellent by January and throughout the South American summer, until mid April. Just like the others, you’ll have to adapt to conditions. Sink tips in higher water, and you can actually fish floating lines with great success when conditions are right. The time of day can also make you change dramatically. In lower water especially, you may be forced to fish very small nymphs on tips swung deep through the fish mid day, but as soon as the sun gets off the water, they consistently take huge intruder-type flies. Sea trout actually act like they are feeding and get furious for big flies as the light goes away. Big browns can fight hard too. I am always surprised at how much they jump compared to their resident counterparts … it must be something in the saltwater. They can also take long, hard runs, but they are notorious for bulldogging and staying down deep and pulling hard and heavy. Careful, the big ones love finding structure to wrap you up and break you off. 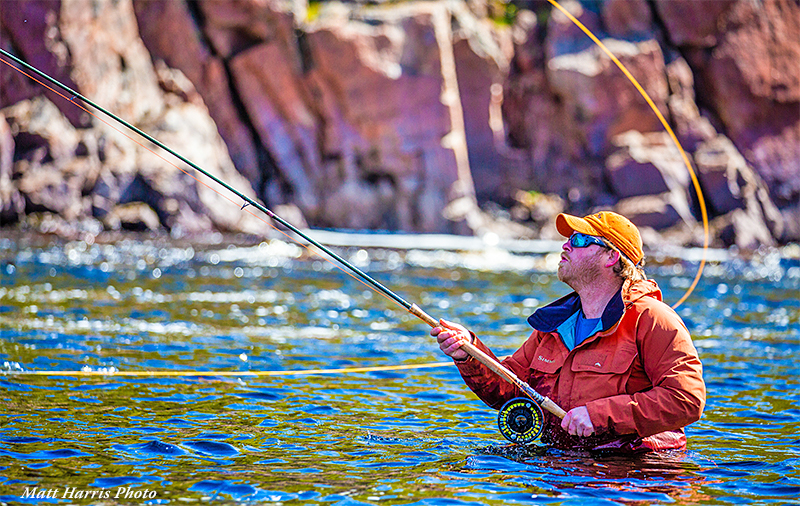 The Grand Slam of Swing is composed of the four toughest, hottest anadromous fish on the planet. There is no answer to the question of “Which one is best?” All of them are unique, offering different challenges and adventures all over the globe during different times of the year. Go explore and chase them all – you will not regret it. They will all expand your knowledge and experience at swinging flies and lead you on adventures to places you might not have expected.

I will always consider myself a steelheader, but my favorite anadromous fish is the one that’s swimming in front of me, and my favorite river is the one I’m standing in.