Essential Gear for Fly Fishing for Arapaima at Pirarucú 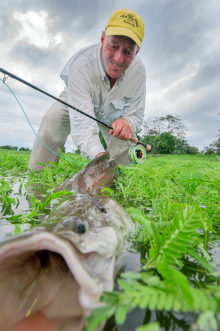 If you want to chase the most incredible river monster in freshwater, look no further than the arapaima (pirarucú), the largest-scaled freshwater fish in the world. They reach unbelievable lengths of up to 9-feet long and weigh in excess of 400 pounds. They are an air-breathing fish, resembling tarpon in both size and shape, but with more coloration and distinctly prehistoric fins and an eel-like back end and tail. They have a wide, scaly, brown and gray-hued body and a tapered head, often with deep red coloration along their fins and highlighted between their scales.

Arapaima can stay underwater for only short periods of time (up to 20 minutes), far below the water’s surface, where they can hunt smaller fish on the bottom. But they eventually have to come up to the top for another gulp of air. It is then that they present themselves on the surface with a violent kick turn, slapping their massive tails against the water on their reentry as they dive back down to the bottom. When you finally get one of these legendary fish to suck in your fly, they go absolutely mental. The initial force that you will encounter right after the grab is hard to overcome, and the first 20 seconds are chaos as you try to set the hook hard and deep, while the fish violently thrashes its head underwater and surges against your attempts to make sure it is really stuck.

Their mouths are as hard as marble, so often after a brief moment of panic and mayhem, you are gutted to feel the line go limp because the monster is no longer attached to the other end. But if you make it through this initial gauntlet, arapaima will usually launch into the air in an amazing display of acrobatics, especially for a creature of this size. It is really something to connect with one of these amazing fish. 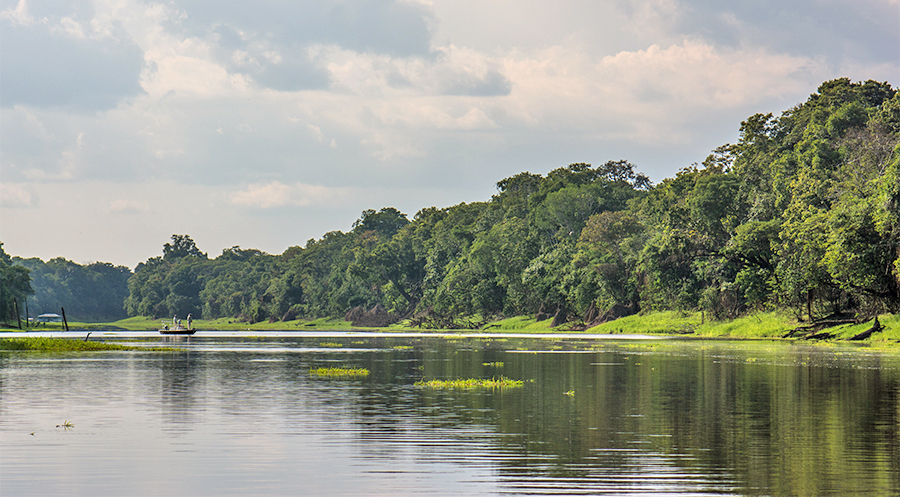 Fishing for arapaima is unconventional to say the least. It’s not unusual to see over 500 giant fish roll during every fishing session at Pirarucú. They are everywhere, they are loud and splashy, and you often see them well within casting range. However, they aren’t super aggressive feeders. They will sink to the bottom and lie still, waiting to ambush an unsuspecting baitfish, but they won’t move far … the fly has to come right by their face. You’ll feel the fly get sucked in and then you will strip set as hard as you can and keep stripping until you can’t anymore. And then you’ll try to rod set, pulling straight back with a static line to drive the hook home. You want NO lift or rod bend at all in this process, because if you do, that will spell “game over.” All of this is very similar to big tarpon, as they both have that solid granite-like mouth, and you have to drive the hook into that hard plate. Although the battle is epic, the fight is short lived … the big ones will be done in under 20 minutes, if they stay on. 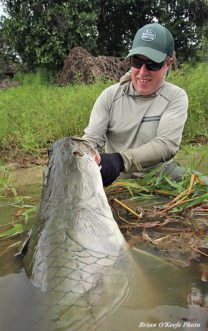 Fishing for arapaima is seriously mentally taxing, especially after a few hours without getting an eat. You will see so many giants rolling around while you just hope for one big grab. You really have to stay focused, fishing deep and extremely slow. If you get lazy or impatient and start stripping a little too fast, you are out of the game. You have to constantly concentrate on keeping your retrieve slow. You’ll throw your fly 80 feet or more and take five or six minutes to strip it all the way in. It’s mind numbing.

The following essential fly fishing equipment is what you need to effectively fish for arapaima and arowana in the Brazilian jungle.

Fly Rods:
9-foot rods are what you want down here. For arapaima, you want all the distance you can get, and for arowana, you want precision accuracy. You will want a four-piece, 12-weight saltwater fly rod for the giant arapaima and a 9-weight for other species like arowana, peacocks, tambaqui, and pacu. These rods have extra integrity built into them and feature oversized guides, a fighting butt, heavy-duty reel seats, and the proper taper to cast big streamers and fight heavy-weight fish. 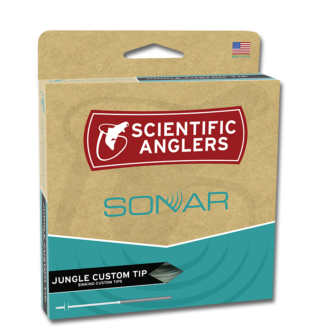 Fly Lines:
Aggressively tapered fly lines, purposely built for the jungle, are what you want here. Standard weight forward fly lines will not cut it. You will destroy your arm trying to cast a weighted 4/0 steamer, 800 times a day, with the wrong line. The new integrated shooting tapers have changed the game. 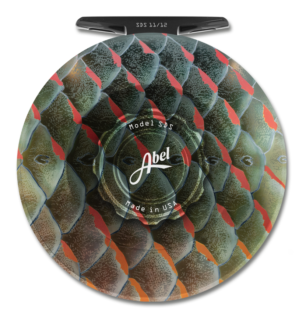 Fly Reels:
You’ll need a quality saltwater fly reel that balances your fly rod and has a rock-solid drag. You will be fishing maximum drag for arapaima, and a quality saltwater reel with a smooth and sealed disk drag, machined from bar stock aluminum, with a large, easy to adjust drag knob is the way to go. The fight is a tug of war, where maximum side pressure and 20-plus pounds of drag is the norm. 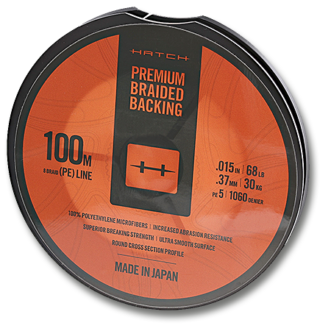 Reel Backing:
Hatch PE 8-braid Premium Backing is rated at 68-pound test and is the undisputed champion in the world of backing. You get what you pay for with this stuff. It is three times the strength and half the diameter, so you can get twice as much on the spool, and it will be the last backing you buy.

Leaders:
80-pound fluorocarbon straight leader material for the arapaima and 40-pound fluorocarbon for the arowana and other species. Heavy leader material is essential in setting the hook into a 300-pound arapaima. More than once we have even seen the 80-pound fail. The guides literally tell you on the first day that if you break it off with 80 on the hook set, you are doing it right.

Flies:
Large saltwater streamers tied on heavy-duty hooks (4/0 – 6/0) are what they fish to the big boys. Long dark streamers with big profiles like the GT Brush Fly are the favorite. Some more natural patterns work well too, like the Major Bunker. We also did well with some flies that had splashes of bright colors. Black flies with orange throats got a lot of eats.

The Mormon Cricket is super fun to fish for the arowana. You will sight cast to those fish around the structure, and they’ll come up under it and slurp it down. A smaller streamer is also good for blind casting behind the structure; we found the chartreuse Boca Grande to be perfect.

Clothing:
You’ll want fast drying pants or shorts — the same type of garb you would wear flats fishing. You don’t have to bring a lot of clothing, as there is daily laundry service at the eco lodge where Pirarucú is based. 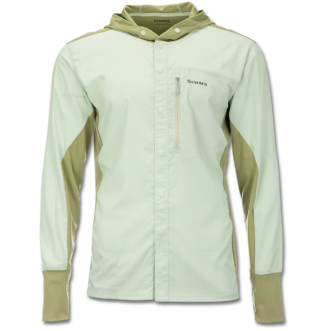 You will also want to bring three or four tropical, long-sleeved shirts for fishing and to wear around the lodge. Go get some synthetic boxer briefs, you won’t regret it. You don’t need to bring a ton of clothes though.

For footwear, a boat shoe with non-skid sole will give you plenty of support and traction on the skiff. Anything that won’t snag your line when taking shots. Astral Loyaks or Crocs are a good choice. Be sure to bring a couple pairs of lightweight, lightly-colored socks to protect your feet from the sun. 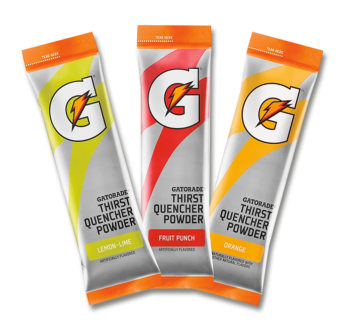 Electrolytes:
Bring Gatorade, EmergenC, Liquid IV or another electrolyte mix. The jungle is hot and humid, and you will sweat a lot. Water is great, but if you are constantly sweating, you will lose salt and minerals, which will cause cramping. We like to drink three full water bottles mixed with electrolytes – one in the morning, one at lunch and one after fishing. Believe us, this is a game changer.

Other ancillary items to bring include: