Whenever we are faced with fish dimpling on the surface of an otherwise glass-smooth piece of water, the angler in all of us tends to panic. We wait so long in between these special moments of our fishing career (where the stars align, the wind is calm, and there are fish rising everywhere) that we completely forget all the times that we played out this scenario in our day dreams and did everything right. Although the information here will help you take advantage of those rare occasions, I don’t expect you to get it perfect every time. I know I don’t!

The most important part of our approach to a rising fish situation is to try to figure out what the fish are eating. There could very well be a number of different insects hatching at one time, so it is helpful to know which insects the trout are eating. In terms of different species of insects, we can narrow it down relatively easily. If there are large insects around, like stoneflies or grasshoppers, we should be able to see these being eaten. The rises on these insects will also be relatively aggressive. If we are unable to see large insects but are seeing aggressive rises, the fish are most likely eating caddis. A caddis tends to swim to the surface and try their best to exit the water as fast as they can. Therefore the trout must be quick when feeding on these insects. Many times you will see the fish leap out of the water in pursuit of a caddis. If you are seeing soft rises, where it looks like the water simply had a drop of rain hit it, you are probably seeing fish that are eating mayflies or midges. Since both of these insects hatch relatively the same way, I will talk mainly about the mayfly.

The mayfly hatching on a glass-smooth piece of water is the ultimate challenge in fly fishing. It is this chess game that has occupied the time and thoughts of anglers since long before Izaak Walton wrote about it in the “Complete Angler.” It is the obsession that some of us have that will make us stand in one spot on a stream, successful or not, and make 1,000 casts to a single fish. However, if you do your homework and keep a level head, all those casts are not always necessary.

When mayflies are hatching there are four distinct stages of the hatch that will cause a trout to rise. It is this factor that allows fly shops to sell you two-dozen fly patterns to imitate one insect. The four stages are as follows:

The nymph forms near the surface (fig. 1),

Being able to recognize which of these stages any one trout is feeding on takes practice, dedication, and a keen eye. Here’s what to look for. First you have to stop casting and watch your fish. Notice which parts of his body you see come out of the water, if any, during a rise. If you don’t see any of his body and only a disturbance on the water, he is not eating on the surface at all. He is eating nymphs just under the surface (fig. 1a).

If, when looking real close at a rise, you see the fish’s body break the surface but not the head or nose of the fish, he is probably taking emergers that are half in the water and half out (fig. 2a).

Only when you see the nose of a trout should you go to a dry. Fish that are feeding on the surface  will have to break the surface to eat the insect (fig. 3a).

Fish that are feeding on spinners will appear the same way. Look closely at the water’s surface to decide which stage to imitate with your fly.

With a little practice and perseverance you will be able to watch a fish feed on the surface and know not only what kind of insect he is feeding on but also which stage. Mastering this will take out most of the guesswork and the panic that we all endure on a day that was made for “fly” fishing.

When dry fly fishing for trout during a hatch, with the fish actively feeding, it is important to know and understand a little bit about how a trout feeds and what he can see.

The section of water where a trout selects his insects is called a lane. These feeding lanes will increase and decrease in direct relation to how close the trout is to the surface of the water. The closer that a trout gets to the water’s surface the smaller the feeding lane becomes. We have all been in a situation on a small stream and had a fish come from the depths to impale itself on our fly. We have also seen fish actively rising to insects and be seemingly uninterested in what we had to offer, even though our buddy was knocking them dead with the same pattern. Both, more often than not, are usually a result of the fish’s sight window.

A trout’s view as it looks up from its position in the water goes out like a cone in a 360-degree radius (fig. a).

When this cone hits the water’s surface, it is deflected outward causing a bigger sight window outside the water (fig. b).

The deeper the trout is in the water column the larger this cone becomes beyond the water’s surface (fig. c). 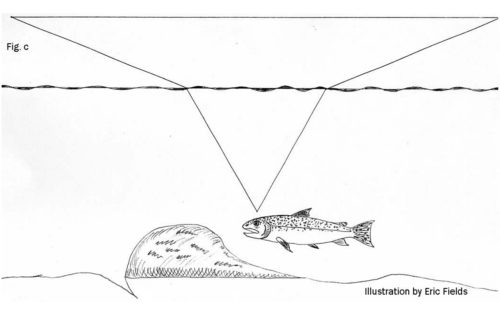 We have all heard of, and maybe even tried, crouching as we approach the riverbank so not to spook the fish. This would be a good idea as long as the fish are relatively deep in the water column. However if fish are close to the surface and feeding regularly this is unnecessary. A fish that is near the surface cannot see outward above the water as well as one that is deep (fig. d). 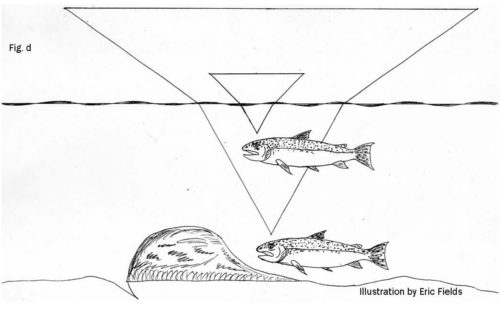 When a fish is at or near the surface is when casting accuracy comes in. The top view shows that a fish at the water’s surface can see very little of the surface itself (fig. e).

Therefore it will only eat those insects that float directly through this sight window.

For optimum success it is best to drift the fly into these sight windows rather than casting into them. So when fishing we must determine how deep the fish is in the water column so that we can judge how far away we must start our drift.

Once we have determined this, we can now look at the water’s surface and determine where the fish’s feeding lane is (fig. f). 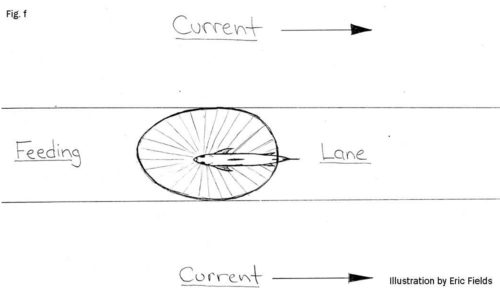 Nine times out of 10 fish swim or drift downstream to take a dead drifted fly. This means that where you see the rise is not necessarily where the fish sees the insect. Chances are that the fish is holding upstream from where he is rising and drifting back to intersect the fly (fig. g).

So you must adjust the distance you start the drift up stream based upon how deep a fish is in the water column. The deeper the fish is the longer the drift must be.

These are some insights into how trout rise and the tactics used to fool them into taking an artificial fly. Using this knowledge to your advantage takes casting practice and time on the water observing fish. So the next time you are faced with a stream full of rising fish, take a deep breath, stop fishing for a moment, and try to figure out how the fish are rising and approach them properly.

And when you are back in the states and not chasing exotic species of fish all over the world, go to your favorite trout stream and remember why you decided to become a fly angler in the first place. Take some time to learn the reach and slack line casts. Watch a fish rise until you can figure out what insect he is eating and which stage he has keyed into. Try to figure out where you need to place your fly and with what cast in order to get a perfect drift right over him, and watch him rise as if he’s eating from the hand of Mother Nature herself. Then, with authority, bury the hook. Good luck, and good fishing!