We would like to welcome Paul Lenos
to the guide team here at The Fly Shop®.

Many of us who end up fly fishing happen upon it by chance while others are introduced by a family member.  Paul Lenos’ introduction to the sport of fly fishing began on a family camping trip to the Green River.  His father, not a fisherman himself, perhaps sensed something that would appeal to his ten year old son, and purchased him a fly rod setup while in the local fly shop.  Later that day, Paul rigged up his new fly fishing outfit and began trying to catch some trout he had scoped out earlier in a pool.  Paul tried and tried to catch them, but no luck.  Distracted by a bear print he noticed he was standing on, he set his rod down, the fly swung, and he had his first trout on a fly rod!  After that he was totally hooked on fly fishing.

From his childhood through college, Paul pursued many species of fish in his native Ohio including the Great Lakes steelhead.  Having received his Environmental Sciences degree, he came  west to California to pursue work as a fisheries biologist.  As luck would have it, his prior experience in construction allowed him to obtain work at the Aniak River Lodge.  Ludi, impressed with Paul’s work ethic, attention to detail, and easy going nature, immediately pressed him into service as a guide.

He hasn’t looked back as guiding allows him to pursue the fish he loves most, Rainbow trout, in all of its life histories.  When he is not guiding, he spends as much time outside as possible; fishing, hunting, hiking the hills and mountains around Redding with his wife Jessica and their dog Shadow.  If they aren’t out enjoying the surrounding wilderness then you are likely to find them in their garden. 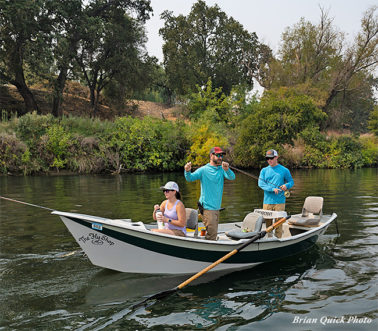 Spending a day on the water with Paul will not only be a great day chasing trout and steelhead, but will also give you some insightful knowledge on the fish and fishery.  Paul was a fisheries biologist prior to switching to guiding full time.  Being a wildlife enthusiast, he’ll definitely be able to tell you about the creatures you’ll see during your fly fishing fun.

Paul is an excellent boatman and a licensed Coast Guard Captain.  Don’t worry, you don’t have to call him Captain Paul when on board his Clackacraft drift boat.  But you should know you’ll be in experienced hands.

If you had one piece of advice to give to your guide clients, what would it be?
Conditions are variable, but your experience can always be a good one with an open mind.

Favorite Fish to pursue?
My favorite fish to pursue is Oncorhynchus mykiss (Rainbow trout) and its subspecies. The coolest part about them is that they can survive in variable conditions from high mountain meadows to the central valley rivers or alkaline desert lakes.

What fly fishing destination is on your Bucket List?
I have always wanted to explore the backwaters of Belize.

Favorite Fly Rod and Why?
My favorite fly rod is the 9ft 8wt St. Croix Rio Santo. This rod is dependable because it got me through catching dinner every night in Alaska.

Favorite Reel and Why?
My favorite reel is the Sage Spectrum LT because it has a great drag system on it that allowed me to haul big rainbows out of nasty log jams on the Aniak River.

Favorite Fly and Why?
My favorite fly has to be the Dali Lama because watching a rainbow trout go bananas over a 4-inch long fly is the coolest thing ever.

Which living or non-living fly fisher would you want to spend a day Fly Fishing with?
I would spend a day fly fishing with Aldo Leopold. Stewardship of natural resources is very important to me. Aldo Leopold’s book “A Sand County Almanac” helped form the foundations of my own environmental ethic.

What is your most memorable fly fishing trip you’ve taken?
Backpacking at 10,000 feet in Whitney Meadows to catch golden trout in their native drainage, 28 miles round trip. 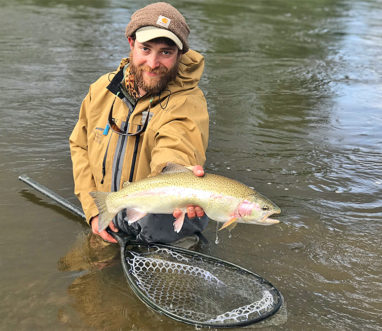 Which talent or natural gift would you most like to have?
I wish I was musically inclined and could play the guitar.

Who are your heroes in real life?
My dad, my wife, and my brother

What do you most value in your friends?
Loyalty, honesty, and appreciation for the outdoors.

If you were to die and come back as a person or a thing, what would it be?
I would come back as an osprey because I would get to fly around all day and fish for my meals.

If you would like to plan your next fly fishing day with Paul, give us a call at 800-669-3474 and we can get you on the calendar for an excellent and entertaining day of fly fishing.