Indicator [ in-di-kay-ter ]
a person or thing that indicates, signals, or points out.

Indicators (bobbers, floats, corks) are one of those fly fishing essentials that you either love or hate. Old-timers call them bobbers and believe that the word “indicator” is just a fancy way of describing the red and white bobbers they used on their fishing pole as a kid. In a way they are correct, but at the same time indicators have changed the game of fly fishing for trout forever. Love ’em or hate ’em, indicators have been the gateway drug to fly fishing for the past several decades. There is no better way to get someone “hooked” on fly fishing than to put a fish on the end of their line. And although not the most enjoyable method for some seasoned veterans, indicator nymphing is arguably the most productive way to fish for trout. 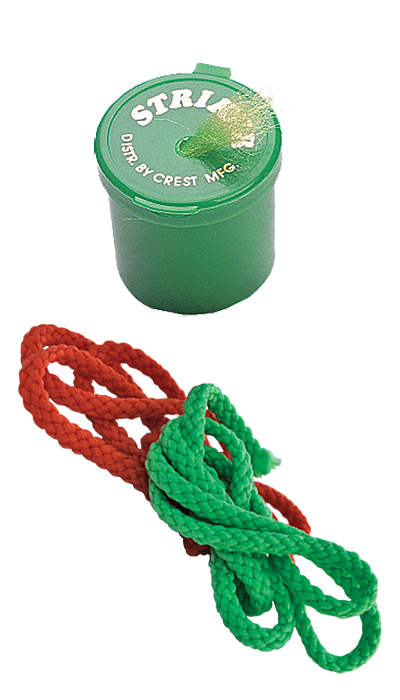 Thirty years ago, we were very limited on our options, and most of us used combed out polypropylene yarn with floatant dabbed on as our indicator. The yarn was tied onto your leader at the depth you wanted to fish your nymphs, and this worked well for many years! (Interestingly, one of the best trout fisherman we know, Mike Mercer, still prefers to use yarn as an indicator for his nymph rigs. He prefers it due to its high silhouette on the water, exceptional sensitivity to even the lightest of strikes, the ease with which it slips under the water from a strike compared to many of the foam and trapped air style indicators, the way it anchors into the water and stays very “quiet” during a drift, not bouncing around nervously on the surface, its more natural, broken silhouette on the surface when fishing to hard-hit fish, and the softness with which it lands on the water). Back then many of us carried a hank of yarn in our vest pocket and a comb for brushing it out to enhance its size and floatation. Add your favorite floatant and you were ready to watch your yarn indicator float high and dry for a few hours before having to reload it with floatant. About this same time, many guides (especially in Alaska) began using Corkies – enameled coated round cork balls – as indicators when fishing glo-bugs. The Corkie would slide onto the leader, and a toothpick would hold it in place at whatever depth was desired. 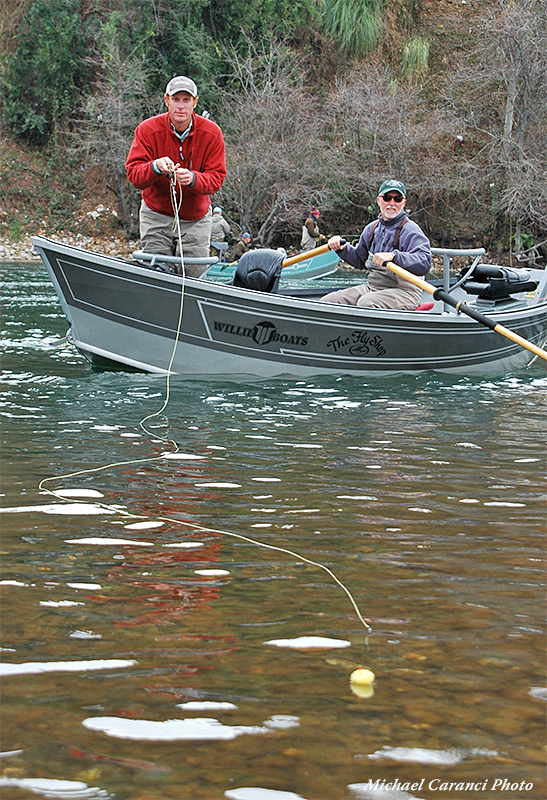 Things gradually changed with the invention of the Boles Flote Rite Indicators. These were designed by the guide team here at The Fly Shop® and ultimately Lonnie Boles packaged them for consumers. They were made out of yarn. The bottom of the indicator was melted and a barrel swivel was permanently embedded in the end to attach your leader. We were fishing a true 90° rig back then, and it is still the best way to get a dead drift with a nymph rig. You would connect a butt section to the swivel with a loop knot and also tie your drop line (usually straight tippet) tight to the swivel. If you were getting a dead drift it would become extra sensitive because the only pressure on the float was coming from your flies, not your fly line. It also featured a vertical flag with a red tip – if the flag twitched or moved, it was likely a trout eating your flies. The flag also showed you if you were getting a good drift. If the flag was pointing anywhere but straight up you knew your drift wasn’t correct and you needed to mend your line. This was a great tool for the beginner and expert angler alike to show the proper way to mend line to get a quality drift. These came in two sizes and in multiple colors. 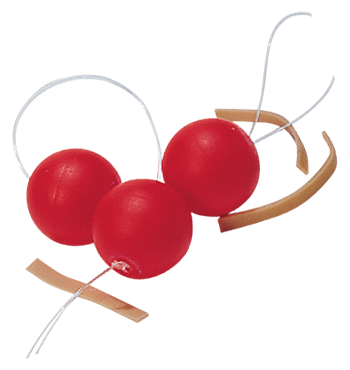 Then came “foam technology” with the Big Ballz, Palsa Pinch-Ons, and Tipper Indicators. These were all made of various hard and soft foams and painted hi-vis colors for easy sighting on the water. This technology is still in use today with the Insta-Set, Screw-Ball, Plumbobber and Fish Pimp indicators. The Palsa Pinch-Ons have also remained popular, particularly for spring creek and stillwater fishing, where their lesser degree of buoyancy – compared to hard foam – is not a problem. Palsas were also the original “sighter” before Euro nymphing took over. On rivers like the Upper Sacramento we would place three Palsas a foot apart while high sticking so we could see where our line was and manage the drift accordingly. Then along came the Bio Strike from Loon Outdoors that performed similarly to the Palsa but was actually reusable. You could roll a small ball of putty on your line, and take it off again without destroying your leader. It was also great to use when fishing small dry flies to help reference where your fly was on the water. 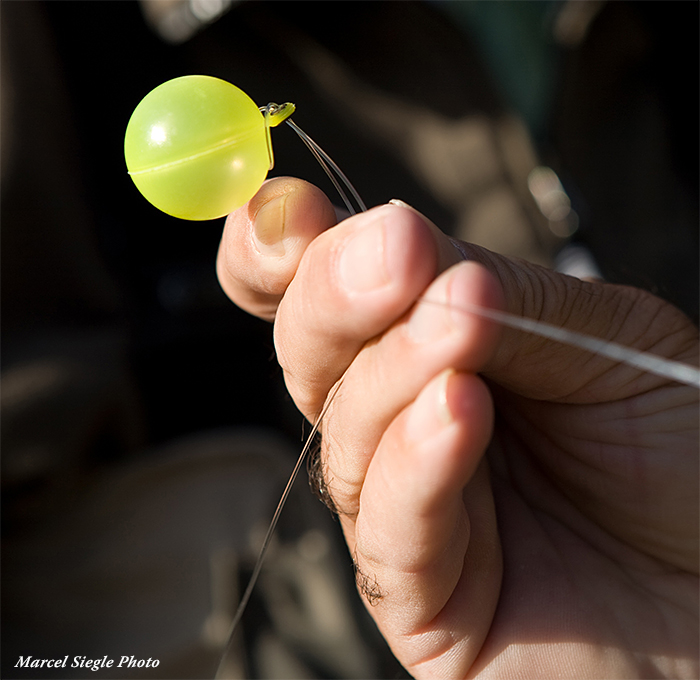 In 2009 we saw a new trend begin with the Thingamabobber. This was the start of the “trapped air technology,” which provided a plastic ball indicator that would float for a lifetime without any need for floatant. These flew off the pegs in the shop for several years. In 2011, due to the popularity of the Thingamabobber, Idylwilde Flies created their own version called Sindicators. These were an exact replica of the Thingamabobber but at a reduced cost. A few years later Idylwilde went out of business, and we were back to having only the Thingamabobber, which is still in our catalog today. The next version of trapped air indicators was the Air-Lock. These indicators added a screw top, both for ease of attaching to your leader, and adjusting the drop length to your nymphs. These seriously impacted the market for Thingamabobbers, although there are still a significant number of anglers using them today. The Air-Lock has the added value of being made from a biodegradable material – if the indicator is lost, it will eventually decompose.

In 2015 we found a hot new product, the New Zealand Indicator System, that uses wool and plastic tubing to make adjustable depth indicators. The beauty of this system is the ability to customize the indicator in both size and color, using different colors of wool for different rivers or light conditions. In small sizes this system is fantastic for use on spring creeks where fish are often spooked by “hard silhouette” indicators and their splashy water entry; yet when made in larger sizes the wool is adequately buoyant to hold up a pair of weighted nymphs in larger freestone rivers. 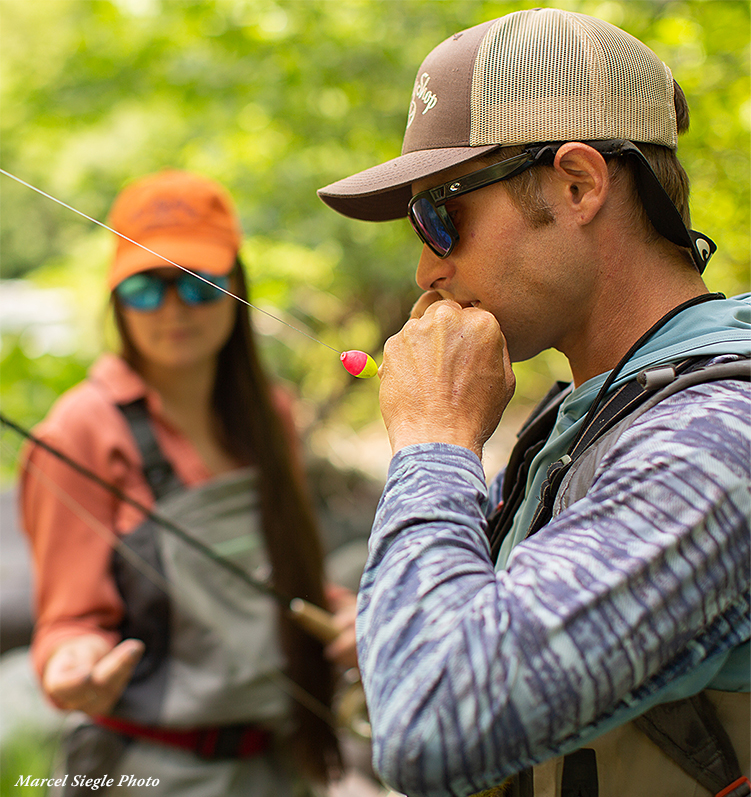 Recently, the hottest new indicator – the Jaydacator – is made of balsa wood by a Northern California guide. These buoyant cylindrical/egg shaped indicators feature high visibility, with contrasting paint on each end. This indicator will last a lifetime unless you break it off, and some anglers – after months of use – will customize a well-used Jaydacator with their own paint scheme. Many of our guides fell in love with these things. Although they are a bit clunky, the weight of the float actually helps load the rod a bit more during the cast, allowing some clients to cast further with these than with traditional yarn or with indicators made of light plastic balls of trapped air. They are adjustable and come in three different sizes. After using them ourselves, we brought them in and added them to our catalog. 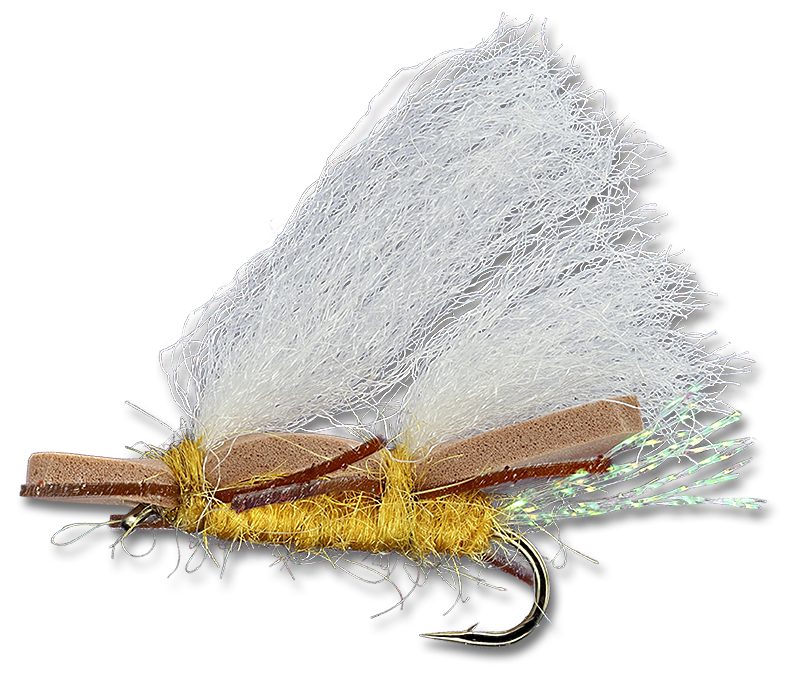 Some of us don’t use indicators at all, unless you count dry/dropper fishing. It is super effective to hang a small bead head nymph under an oversized dry fly while fishing the small pocket water of your favorite trout stream. Now you have the best of both worlds as you can fish a nymph and still have the opportunity to raise a fish to the surface with your “indicator.” This technique, called the “hopper/dropper,” was first pioneered in the summer months when hoppers were prevalent along the stream banks. Today we have flies like the Chubby Chernobyl that are tied with foam bodies and buoyant polypropylene yarn wings, and are designed specifically to be used as an indicator without feeling like you are fishing a bobber.

As with most tools, technology over the past 20 years has played a major role in indicator design. However, the function of indicators remains the same and will continue to be an important ancillary item in your kit. Indicators will often increase your catch rate and are a great instructional tool when it comes to getting a proper drift and hooking trout. Some may argue that using an indicator is “cheating” or “not true fly fishing,” but indicators have proven their place in the sport of fly fishing and are certainly here to stay. We’re sure there are other great indicators out there not mentioned here, or new ones in the design process, and we look forward to seeing the next innovation.