Hooking up with Atlantic salmon

The thrill we get from a screaming reel and a jumping fish is primal, and an anthropologist could probably trace it all back to one fish, the Atlantic salmon.  The species is both the foundation and nexus of the modern sport of fly fishing.

“The three greatest gamefish in the world are tarpon, bonefish, and Atlantic salmon, but I’ll take the Atlantic salmon over all of them.” – Ted Williams, “The Splendid Splinter”

The very name, Salmo salar, translates from the Latin to “leaper”, and trying one’s skill and luck against the salmon has been considered the sport of kings by Europeans since the first one picked up a stick, hung some silk off its end and tied chicken feather to bone or steel.

East Rangá River:
The East Rangá River is located in the South of Iceland about a 70 minute drive from Reykjavik and is one of the two most famous Atlantic salmon rivers in Iceland. It is a remarkably consistent fishery, and has been rated first or second in the country for each of the past 10 years (in terms of numbers of fish caught).

The beautiful East Rangá, in the shadow of the legendary volcano, Mount Hekla, is described by natives as “possessing a beauty that gives fishermen energy and feeds their soul.”  It’s a spectacular, traditional angling experience, fished with eight beats stretching over a 13-mile stretch of river that each offers a variety of water, lots of space, and is easily waded.

West Rangá River:
The West Rangá is fed by glacial springs, and the flow and temperature of both the sister rivers (East & West Rangá Rivers) are constant and rarely affected by flooding or heavy rains. Creel census and catch records have been kept for more than a century in this part of the world and these rivers rate as Iceland’s two most popular and productive fisheries. Only slightly less arguable is the claim that they are the most beautiful and iconic Atlantic salmon fisheries in Iceland.

Nearby riverside accommodations are picturesque and very comfortable.  Anglers begin every day with traditional Nordic breakfasts and end each memorable day with a fine meal.  Both operations are licensed to Árni Baldursson, Iceland’s legendary fly fishing pioneer, and one of the most respected outfitters in the sport. 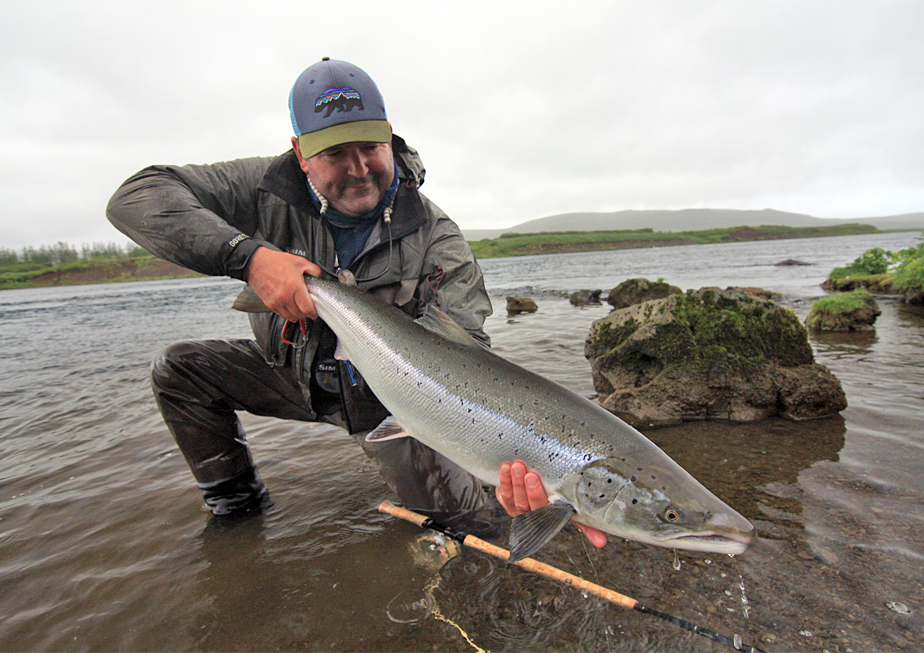 The cost of your Iceland fly fishing package ranges in price, depending on the particular week and length of stay.

Included in your angling package at Iceland Atlantic salmon is accommodations and all meals at the lodge, guided fishing with daily transfers to your beat, and transfers to and from from your hotel in Reykjavik.

Not included in your angling package at Iceland Atlantic salmon are transportation between home and Iceland, transfer from the airport to your hotel in Reykjavik, alcohol, and gratuities. 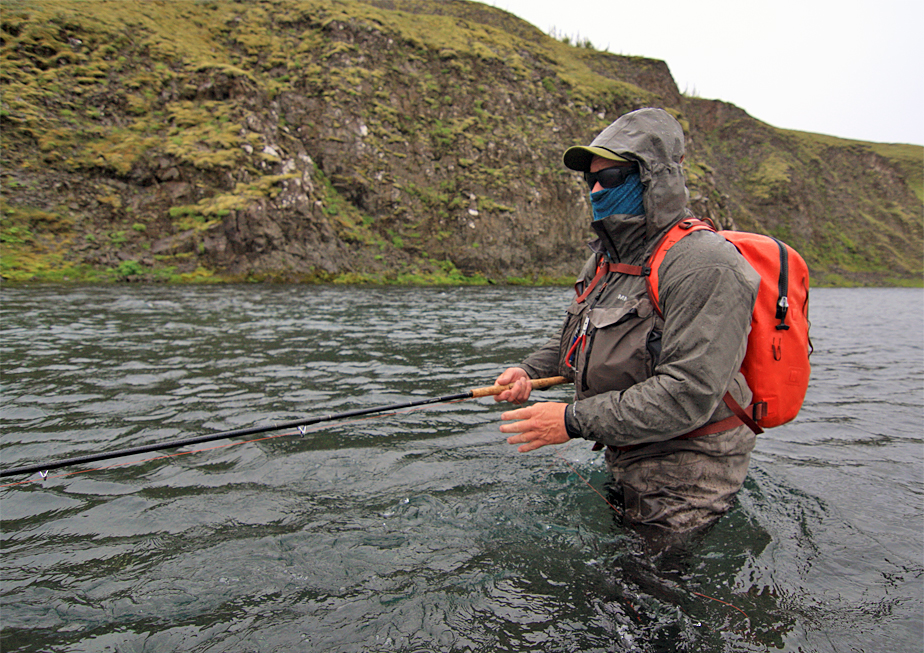 It's in the early days of July when the big, chrome bright, fresh salmon begin to show in the Ranga’s. Prime time is around the middle of July through Early August and the fishing can stay good through the end of that month. Early season they avg. 10 to 15lbs with fish that will go over 20lbs often enough. As the season progresses a strong run of grilse will enter the river driving numbers up and avg size down. 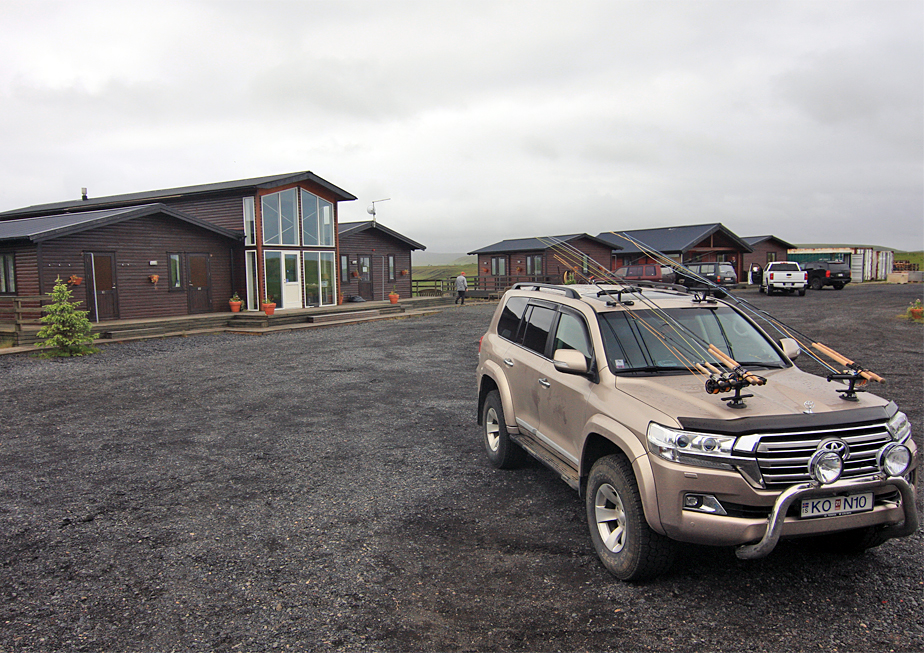 Getting to Atlantic Salmon Fishing in Iceland

Everyone will make their own arrangements to arrive in Reykjavik, Iceland, the only Intl airport on the island and closest major airport to all of the lodge. Stopovers anywhere else in Europe can be easily arranged. You will need to arrange with your hotel in Reykjavik the first night a shuttle pick you up at the airport. You may also be able to take a taxi or Uber, but it is a good 45 minutes from the airport to downtown. You will overnight that first night in Reykjavik and the lodge will pick you up early the next morning to get you to the lodge by midday and have you in the water by the afternoon fishing session. 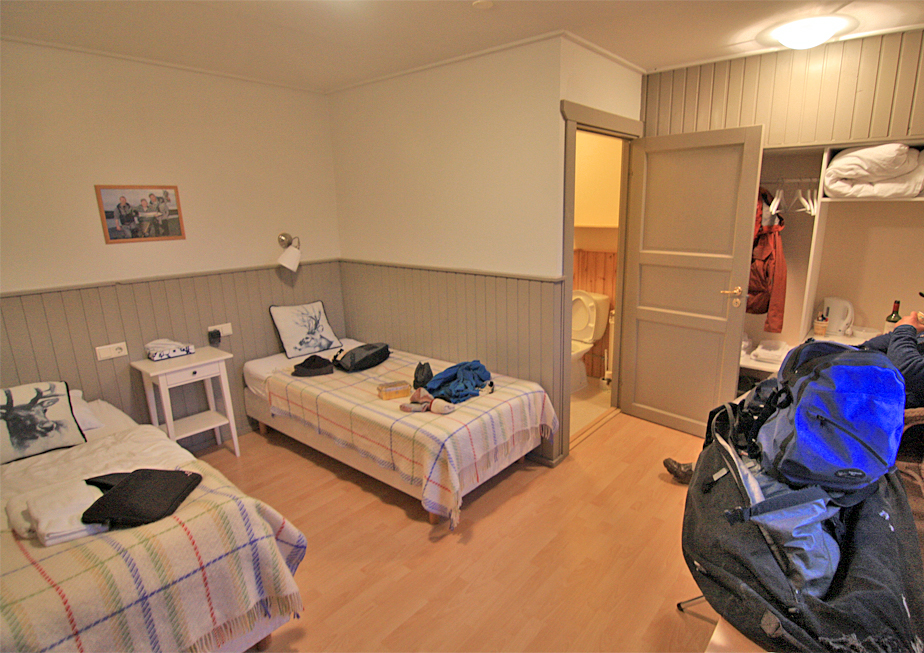 The Lax-A Angling Club utilizes 2 separate lodges, 1 on each fork of the river. Both are exceptionally appointed, extremely comfortable and have amazing chefs to insure you are as comfortable as possible throughput your stay. Both lodges are located about midriver, perfect placement for fast access to any of the beats you will be assigned. Both facilities are very modern and clean, but still have that old salmon lodge feel, especially in the common area that you spend most of your time while not on the water. Both lodges are equipped with a sauna and hot tub to really get you relaxed after wrestling with big salmon all day!

The gourmet kitchen is connected to the main dining facility, which is part of the main lodge room. The kitchen’s are also open, so you can watch the chef work their magic and talk and interact with them as they prepare each amazing meal. The large common room also houses the bar and lounge area, with a fireplace and couches for relaxing between long fishing sessions. The lodge also has a stocked fly shop to supplement your gear or replace something if you happen to forget it. Breakfast, lunch and dinner are always served at the lodge each day, no need to eat on the water with Iceland’s strictly enforced lunch rest period. 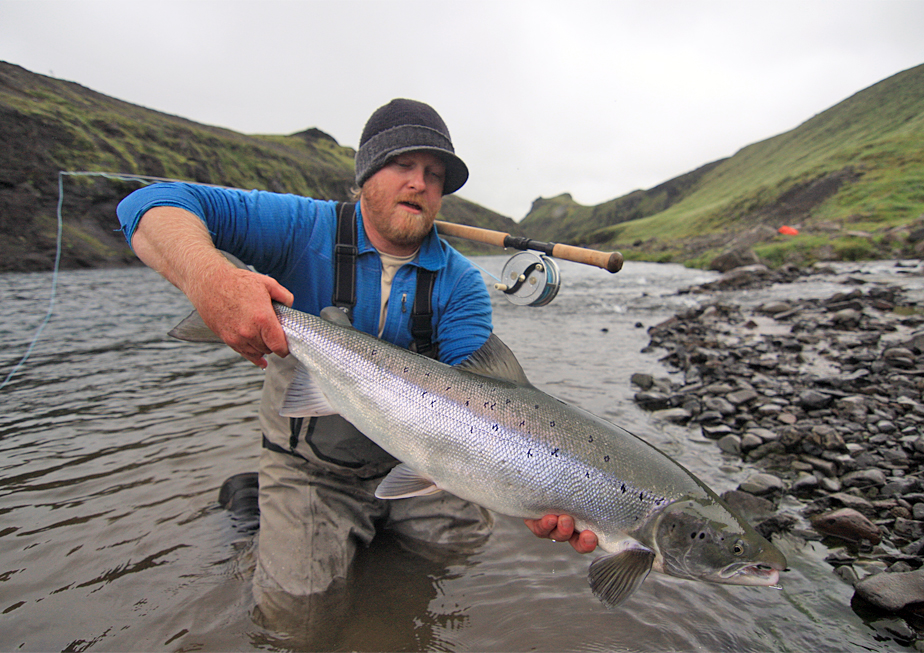 The excitement felt every time the line goes tight is unreal. It could be that monster 20+ pound fish, or just another scrappy 7 pound grilse, but your heart will skip a beat on every tug anyway.

The Salmon of the Ranga are top quality and have a great avg size for Iceland. Early season the bigger fish are running and bright, and as the season progresses you can expect to see a massive push of grilse mixed in with the mature fish as well.

Following the Icelandic regulations, both Ranga operations fish 2 sessions a day. This beat rotation allows for fishing in the morning session from 7am to 1pm. A mandatory 2 hour rest is required on all rivers. The afternoon beat resumes fishing from 3pm until 10pm. There is no night fishing in Iceland in the summer, despite it being light all night. Two fishermen are assigned to fish each beat at a time, accompanied by 1 guide. The Ranga’s are undamned and wild, something which is always special and adds to its natural beauty and the excitement of the fishing. This means the water level is invariably changing and conditions are constantly in flux. To accommodate for these regularly changing conditions, the Ranga’s rotation has beats which fish well in all conditions. Whether it be high, medium or low wate... No matter what the present circumstances may be, each fisherman will get the opportunity to fish prime beats during those specific conditions.

There may be some flexibility from week to week in the itinerary, but a typical day would look like this:

• The E and W Ranga offer some of the finest Atlantic salmon fishing in Iceland – with exceptional runs of Atlantic salmon each and every season, July through August! That translates into large salmon as well as grilse in every pool you swing your fly through, looking for the “grab”. The numbers are good, which Iceland is known for, but there are plenty of bigger fish here as well.

• The Ranga’s utilize guide trucks to access beat assignments each session. You cover new water each day, changing beats midday as well. The lodges are each right in the middle of the river systems, with beats never more than 20 minutes out. No time is wasted getting you to the water, and you will return to the lodge each day for a hot lunch and small siesta before heading out to the evening beat. This is an amazingly comfortable schedule and very efficient way to cover the entire river, wasting no time on long runs to your water each day.

• The 2 lodges utilized on the Ranga’s are some of the most comfortable you will ever stay at. Newly remodeled modern construction, they leave nothing to be desired. Spacious double occupancy rooms, or single if requested, each with a shower and toilet, and plenty of space for 2 anglers to spread out. The dining room and lounge will make you feel right at home at the end of a long day on the water.

• The East and West Ranga offer a 100% Icelandic Experience. The English speaking local guides grew up on these rivers and know every single inch of their home-waters. They’re veteran guides with decades of experience guiding anglers in Iceland. Put that experience to work for you and let these pros help you catch the salmon of your life – Iceland Style.

• The adult salmon on the Ranga’s average and honest 12 pounds and one in 20 will tip the scales at better than 20 pounds. If you are a big fish fly swinger, the Ranga’s are the spot in Iceland – these are some of the largest avg size salmon on the island

• All rivers in Iceland are 100% private, there is no public access. This insures that you will have exclusive access and be the first one through the pool on every beat you are assigned, every day of your trip. This will always guarantee you more fish than fishing in water behind guys that have been soaking worms all morning! 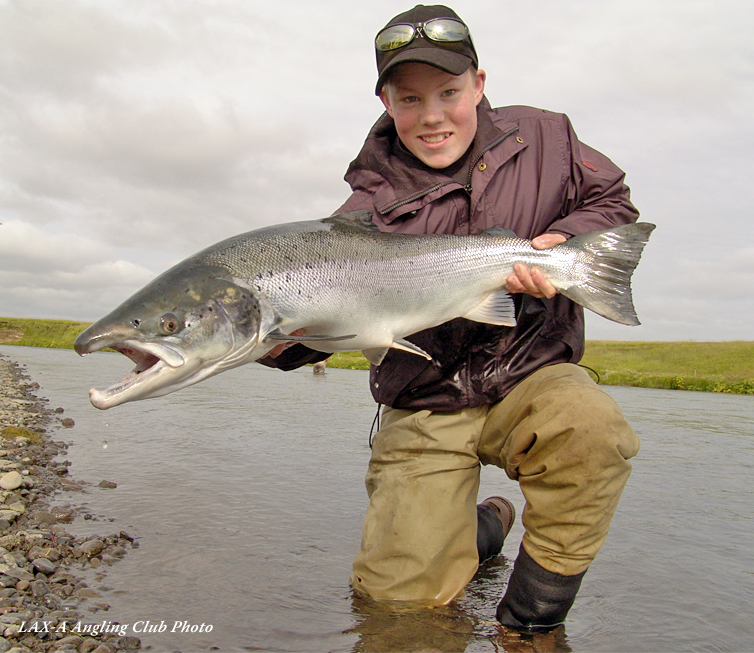 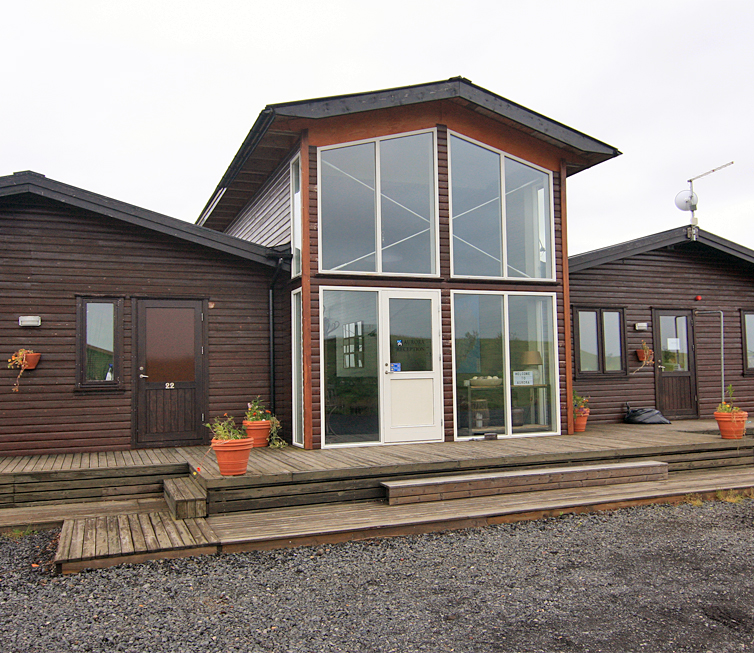 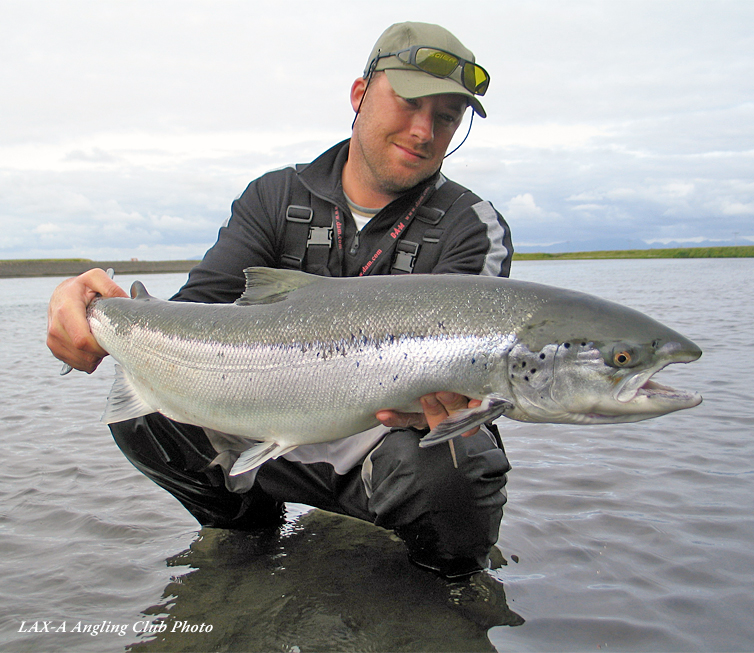 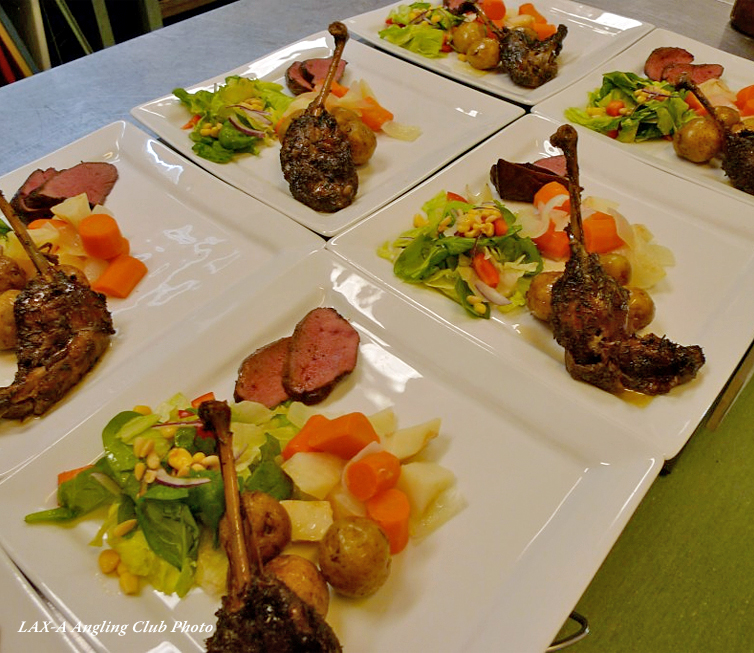 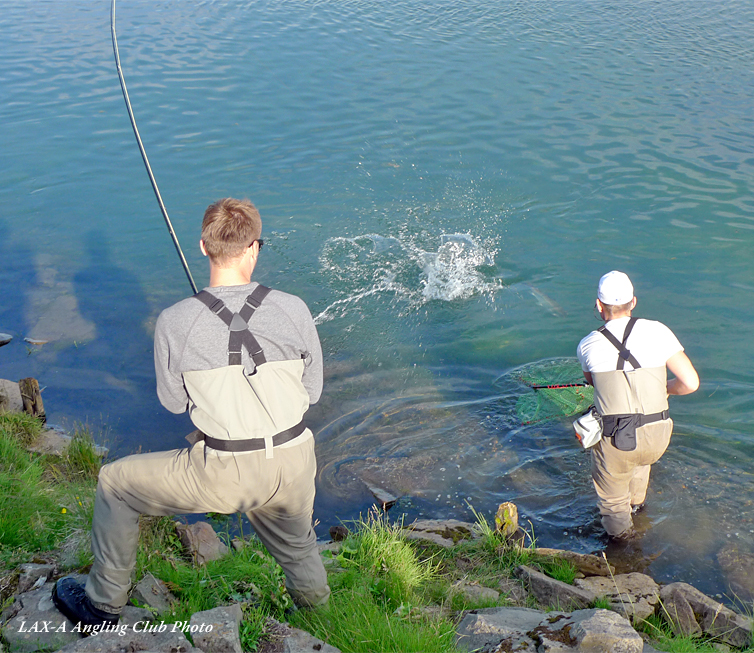 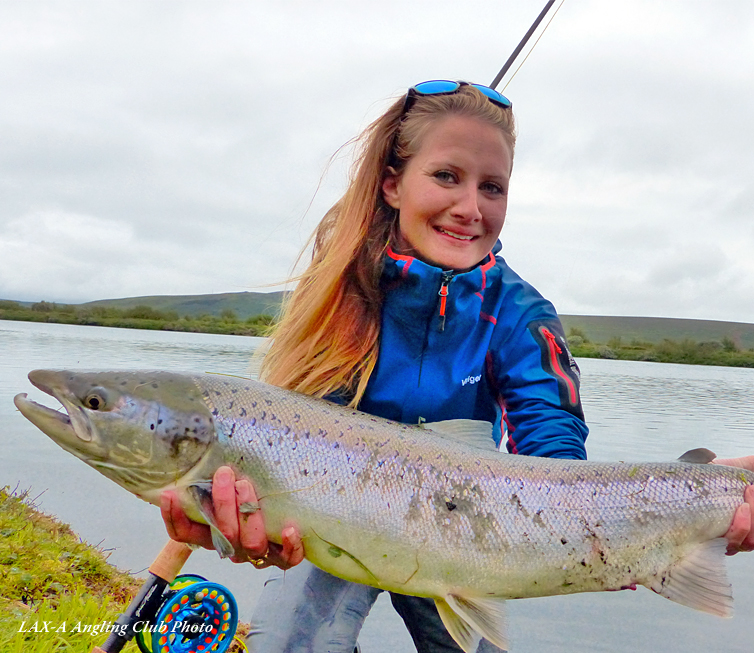 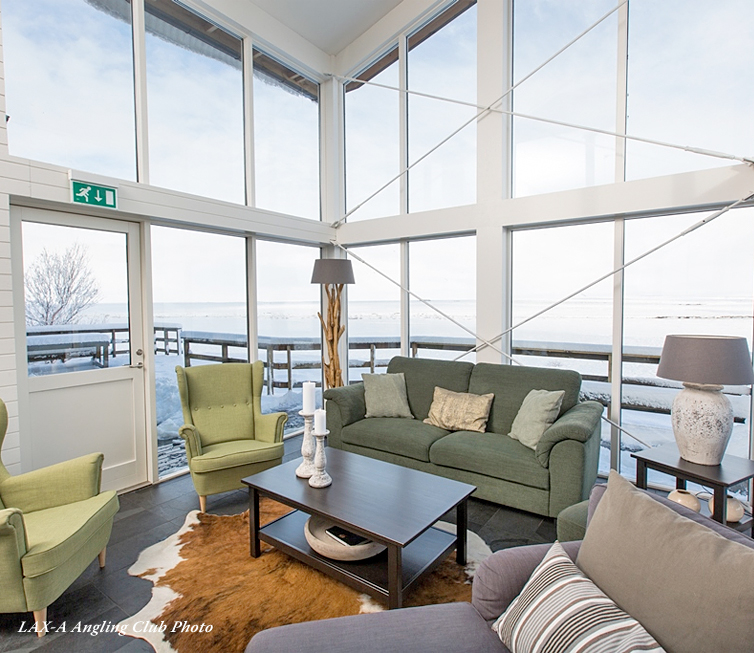 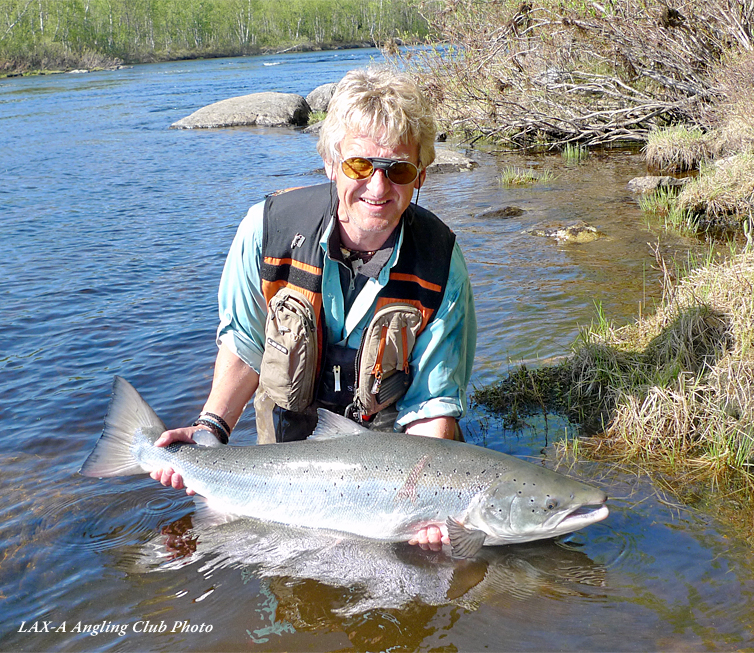 Included in your angling package at Iceland Atlantic salmon is accommodations and all meals at the lodge, guided fishing with daily transfers to your beat, and transfers to and from from your hotel in Reykjavik.

Not included in your angling package at Iceland Atlantic salmon are transportation between home and Iceland, transfer from the airport to your hotel in Reykjavik, alcohol, and gratuities.