If there were a qualifications list for the job as director of The Fly Shop Travel Department, the resume for that position would read like Pat Pendergast’s biography.

He came to The Fly Shop® a little more than twenty years ago in 1996. He first met Mike Michalak, the owner of The Fly Shop®, while guiding in Alaska, in 1986. He crossed paths with Michalak again some years later fishing the flats of the Mexican Yucatan. He kept in touch with Mike after that meeting. Pat, and his wife, Lisa, a few years later, decided to give up their office jobs; he with Fishing International as a travel specialist, and Lisa making movies for George Lucas at Industrial Light and Magic. They set off from Petaluma, CA. taking a month to drive north for a stint in Alaska, getting a remote fishing lodge up and running. They, with their Chesapeake Bay Retriever Maggie, lived in a Yurt on an Alaskan beach. Pat was involved with the new lodge marketing and was guiding again to some of the best silver salmon fishing on Earth and she was chief bottle washer ( kind of gives you the idea of what type of trooper she truly is). By the end of October, they were out of the wilderness lodge business and looking for their next venture. He was still in touch with Michalak and he made, according to him, the best business decision of his life; to accept a position at The Fly Shop.

He arrived with what seemed like a hundred years of fishing, outdoor and business experience packed into a man in his mid thirties. Some of his experience includes Bachelor of Science in Recreation Administration with a minor in Business from California Sate University Chico, but the bulk of it comes from hands-on, in-the-field training. He truly loves talking with 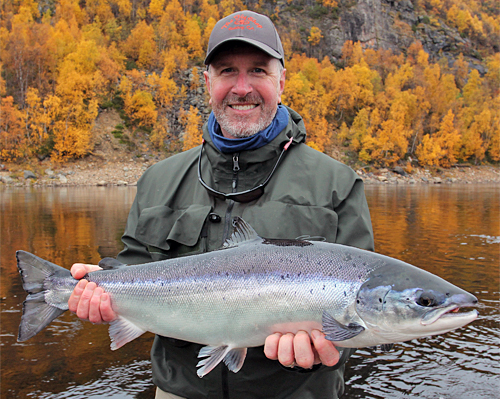 fishing travelers and putting together the trips that only first-hand experience can provide. Pat is the director of The Fly Shop’s International Travel Department. He is highly respected by the staff in the department not because he is the boss, but because he leads with the confidence of experience and is still willing and eager to learn. He works and plays with organization and determination but not with blinders on. He is open to new ideas and solutions to old problems.

His first memory of fly fishing was on the Kings River in California. He used his dad’s fly rod and automatic reel. Since he learns by doing, he thought fly fishing consisted of pulling all of the line off of the reel (to the knot securing it to the arbor) letting it swing downstream and then retrieve by pulling the lever on the reel. Imagine the line and fly zipping and skipping their way upstream bouncing off of the wave tops. Since this didn’t produce any fish he was soon figuring out to make the fly dance at the end of the line and began catching fish in a manner more natural to fly fishing and casting. Someone was talking about automatic fly reels the other day and I saw laughter and mischief in Pat’s eyes. I bet there is a good story there. In fact, I bet he knows how to replace the spring in one after it has sproinged out of its casing. You don’t learn that in a book.

He still has his first fly rod, a Sage fiberglass 2 piece, 8’9″, for a #7 line. Since bluegill and bass were high on his list of fish at that time, this rod served him well.

His first commercial venture into the fly fishing industry was procuring the losers in the local cock fights, and relieving the dead birds of their hackle and selling them to the local fly shop and tiers as prime dry fly hackle. I think the name of their business was “Good To The End” or something like that. I am guessing the money he made from these transactions was plowed right back into “the business”. 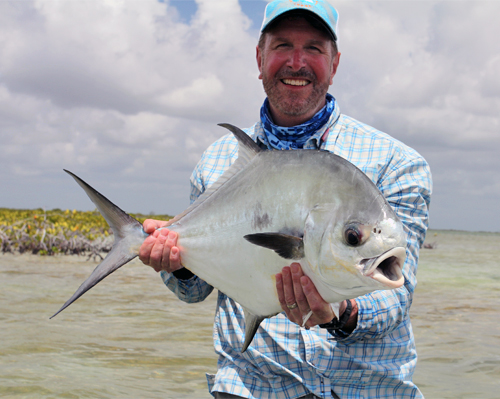 Because Pat is somewhat closed mouth about his personal life, little known facts are revealed slowly as one gets to know him. It is always surprising and at the same time not surprising to hear what Pat comes up with sometimes. Overhearing a conversation about how an outboard is not running right, Pat would get just enough facts to understand the problem and the scenario would read something like this “When I was guiding in Alaska and our jetrboat would act like this, you have to ……(do this or that to the motor), then……replace the (whatever it is), make sure you lay out the parts in the order you take them off and when you put everything back together again be sure to tweak the ….(high speed cotter pin or something like that ). Then it’ll be good as new.” He must have been raised on a farm and/or spent a lot of time in the bush, where you have to know how to fix anything and everything with common sense and materials at hand. Give him a string, a pin and a knife, no …just give him the knife and put him next to a stream and he will cut, plane, form, weave, tie and splice some form of a fishing rod, line and fly and will have a fish on a stick over a fire for dinner.

He is a hunter, fisher and outdoorsman without tunnel vision. He always concentrates on the details but looks at the whole picture and takes it all in. He loves camping with his family and you know he will pass his outdoor knowledge and experiences on to his son. He’s as comfortable with a baitcasting or spincasting rig in his hands as a fly rod although most of his fishing is accomplished with feathers on the hook rather than a worm. His hunting activities include birds, big game, shotguns, rifles or his re-curve bow. Other favorites of his include backpacking, mountain biking, hiking, snowshoeing boating, canoeing, photography, reading, listening to music working and training his hunting dog. He also enjoys a good brew to celebrate a day afield and drinking a tasty wine with dinner.

He is widely traveled and has fish for nearly 30 years. There is hardly a body of water where fish swim that Pat hasn’t wet a fly spanning from “pole to pole”; from the far north in Alaska to the very tip of South America in Tierra del Fuego. Add to that the best saltwater fishing destinations on Earth from the South Pacific to the flats of the Bahamas. The Fly Shop could do no better than to have Pat as it’s director.

Through all of his outdoor and business activities he manages to keep his sense of humor. He can take it as well as give it.

Any biography should include a person’s flaws and imperfections as should this one, but we were told to keep this short and even a partial list of Pat’s “other side” would put this bio into the “epic-volume” category. So we’ll leave that for another time. 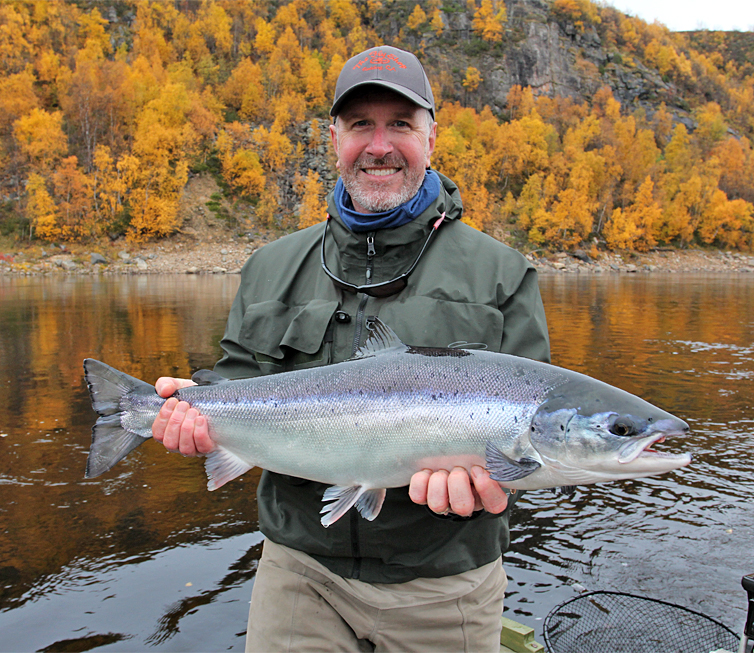 A couple of friends, (brothers) have been fishing the last week of the season at Ryabaga Camp on the Ponoi River for the last five years; this would be their sixth trip. They have been hounding me to get a pass from Frontiers (exclusive agent) for years to join them. I got the go-ahead and a couple friends from Redding were coming along as well, there would be five us total. I had been hearing and reading about the Ponoi River for better than two decades, since the days of Gary Loomis and Tim Rajeff and was pumped to finally get a chance to see and fish the most famous Atlantic salmon river in Russia.
Read More...

999 Ways Not To Catch A Permit 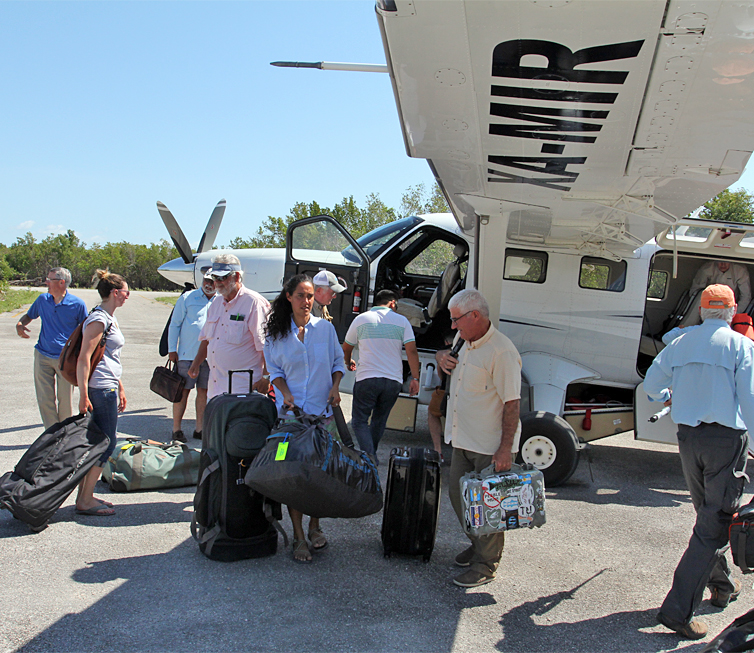 This was a trip I had been anticipating for 20 years. Finally, I was going to get to spend an entire week fishing Espiritu Santo Bay, THE last frontier of Caribbean fly fishing. I had fished the bay several times in the past, first with the former owner and late Tom Woodward of Paradise Lodge and more recent a few time out of the now closed Paradise Lodge with my friend Alejandro de Tomaso. But this was a full week, every single fishing minute on Esb from the new Espiritu Santo Bay Lodge, owners Dane and Chiara Emerson. And after Esb, I was headed to Belize for a week at Tarpon Cay Lodge. And finally, I would be traveling and fishing...
Read More...

999 Ways Not To Catch A Permit 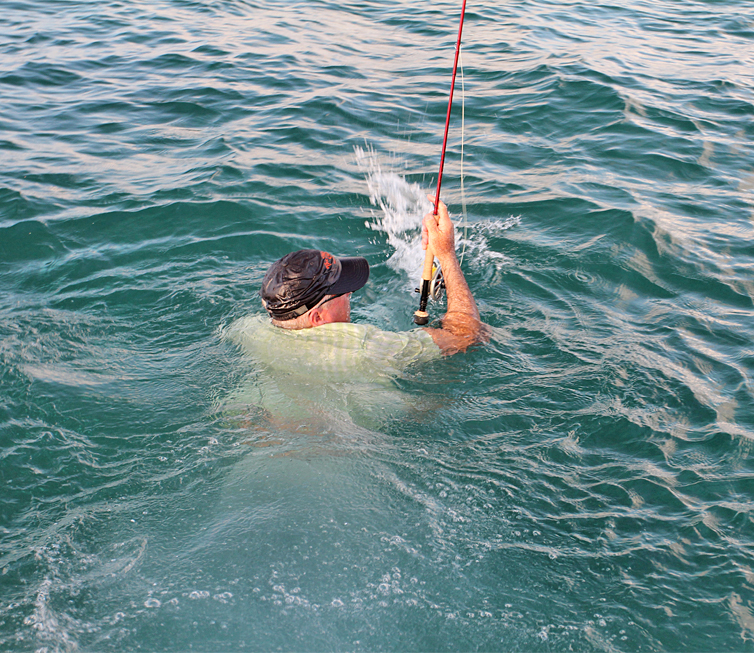 After a successful and enjoyable week at Espiritu Santo Bay Lodge, four of us (Brian O'Keefe, Charles, Ken and I) are headed to Belize and Tarpon Caye Lodge via an all-day auto transfer and short flight to Placentia in southern Belize.