The Steelhead Valhalla Lodge is nestled in the trees along the banks of the Sustut River five miles upstream from the Sustut’s confluence with the Skeena River. The Skeena River System has been labeled the largest producing river for trophy steelhead in the world!

The Sustut River… Crown Jewel of the Skeena Watershed. Because it is located more than 100 miles from civilization and accessible only by plane, the Sustut is the least fished of all the famous Skeena tributaries. The Sustut originates in Sustut and Johansen Lakes in the Omineca Mountains with the Pacific Ocean about 275 miles downstream from the junction of the Skeena and Sustut Rivers.

While casting to and landing steelhead you may enjoy the added benefit of seeing eagles, moose, bears and everything that British Columbia’s beauty has to offer. The scenery is simply unbelievable – every run offers unique vistas and is waiting for you.

The Sustut River represents one of the ultimate Canadian Steelhead experiences. These magnificent sea-going trout enter their natal Skeena drainage in late July, and continue to increase in numbers and move upstream into the clear headwaters of the Sustut through the end of October. Fishing for steelhead can be fantastic until the end of the season, when it becomes increasingly colder and fish are more reluctant to move to a fly.

Steelhead Valhalla Lodge is one of only two lodges on the fabulous Sustut, sharing the abundant pools with the well-known Suskeena Lodge, located several miles upstream. Accommodations at Valhalla are very comfortable. The cabins are private and spacious [shared by 2 anglers] with comfortable beds and linens, and wood stove heat for heat. The guides are excellent, experienced, and work hard to get anglers into fish. Food is hearty, delicious and filling. More importantly, the fishing is 1st Class!

The Sustut River is a spot that is impossible to reach by road and requires a charter flight from Smithers on the first morning of the trip. This is part of the headwaters of the Skeena River drainage and runs pure and clear in all but the worst of weather. The river has been declared so rare and valuable by the Canadian Government that a special fishing license is necessary for all angling. The Sustut is a Class I river with a limited amount of rod days available each year. 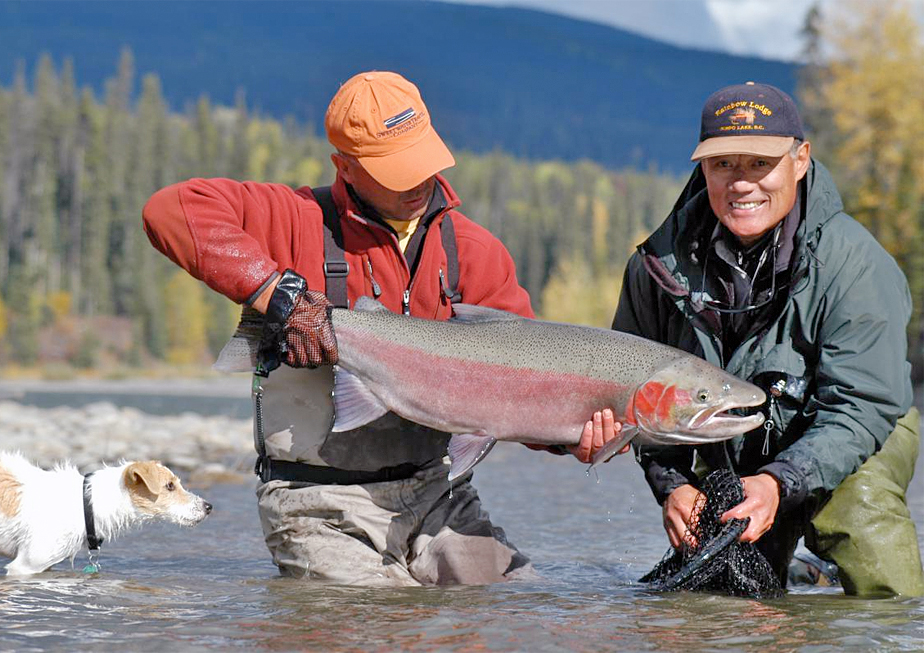 The cost of the week-long Valhalla Lodge package is $6,916.00 USD per person (double occupancy)

• The Steelhead Valhalla Lodge is on a Wednesday to Wednesday, 7 night/6 day program. Shorter stays are sometimes available. Check with us if this is what you are looking for and we will confirm availability and a price.

Included in your angling package at the Valhalla Lodge is round-trip charter flight – Wednesday-Wednesday (Smithers - Suskeena - Smithers), daily guided fishing, accommodations, meals, boat transportation, Canadian Goods & Service Tax, one (1) experienced guide for every three anglers, daily jet-boat transportation on the river and fishing rights from the time of your arrival until you depart. The lodge can accommodate 9 anglers maximum. Steelhead Valhalla Lodge is fly fishing only. Single barbless hooks are required.

Not included in your angling package at Valhalla Lodge are flights to and from Smithers, accommodations and meals in Smithers, British Columbia Fishing license and steelhead stamps (approximately $430.00 USD per angler, available at the lodge), and gratuities. 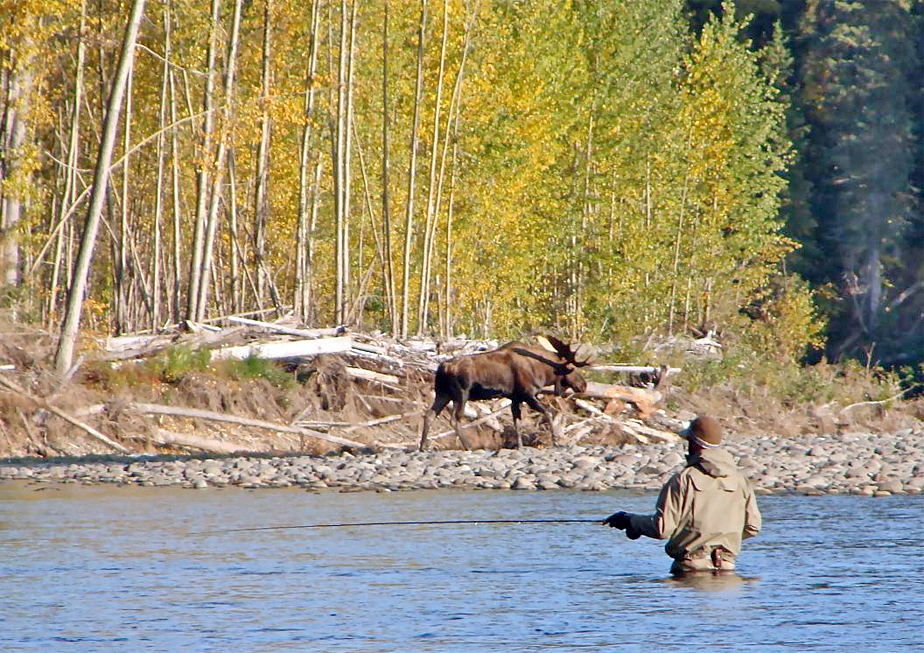 The first fish arrive in August, and by the 1st of September, top quality fly fishing is in full swing.

The big bucks are usually in the river by the second week of September and fish continue to accumulate in holding water right through the end of October.

Space at Steelhead Valhalla Lodge is very limited for the 6 week season and advance reservations are a must. If you are interested in joining us on the Sustut River during one of our hosted weeks, or would like to look at other weeks, please call us at your earliest convenience.

Prime fly fishing for steelhead is from late August through mid-October. There is no certain week or time during this period when we can predict that the fishing will be best. Best fishing is determined by water levels and the weather. 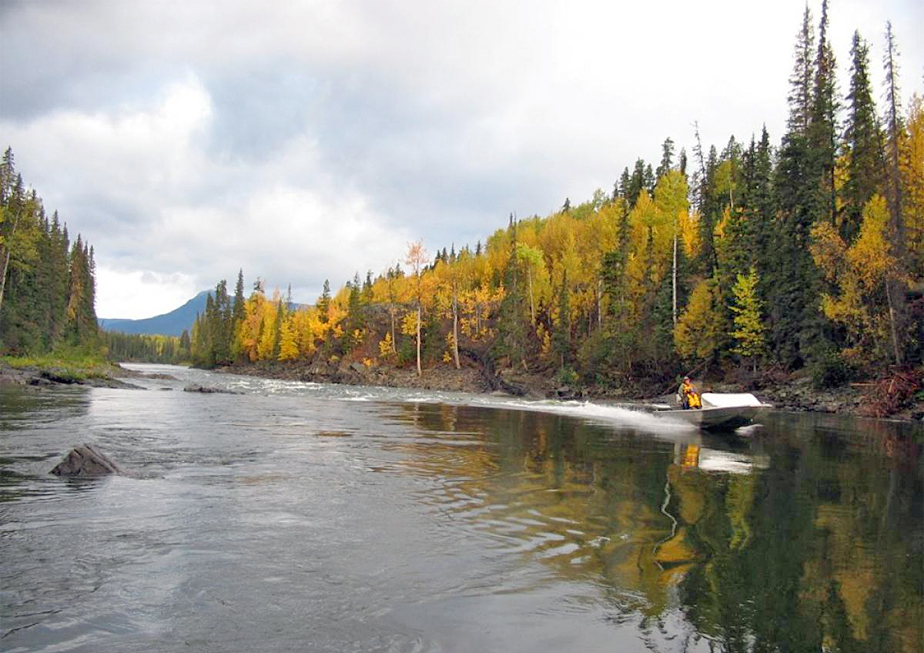 Getting to Steelhead Valhalla Lodge

Anglers are to arrive in Smithers the day before flying into the lodge.

Most anglers stay at the Hudson Bay Lodge (250-847-4581). The lodge blocks out rooms, as space fills quickly during peak steelhead months. You will be required to pay for this room upon arrival; approximate costs will be: Single (one double bed): $100 CAD/ Double (two beds): $110 CAD. Mention that you are a customer of The Fly Shop® to be sure to get the

best price. Credit cards are accepted. You will be met at the airport by the hotel shuttle and brought back to the hotel on your afternoon of arrival. You will purchase your necessary fishing licenses at the lodge (be sure and bring cash for this, as the lodge does not take cards or checks) – if you would like to bring some alcohol into the lodge, there is a liquor store adjacent to Hudson Bay Lodge where you can purchase this.

Due to the remote nature of the Sustut River, we encourage you to pack reasonably. Keep in mind that we use the same charter to bring food and supplies for your week. Also please pack in soft sided duffel bags. We recommend you use two medium sized bags rather than one large bag when packing for your trip Steelhead Valhalla. This makes packing planes, vehicles etc easier for everyone involved. Each angler is limited to 60lbs. of luggage. DO NOT BRING HARD SIDED LUGGAGE.

Day of arrival into lodge (Wednesday):
Departure from Smithers to Steelhead Valhalla Lodge is scheduled for 12:30 p.m., weather dependent. You will make this air journey in a fixed wing aircraft (30 - 45 minutes) departing from the Central Mountain Air Hangar in a Cessna Grand Caravan. You will need to arrange the hotel shuttle to get to the Hangar, where a lodge representative will meet you.

Departure from the lodge (Wednesday):
Scheduled to start at around 2:00 pm, depending on the weather. Please keep the weather and this arrival time from the lodge in mind when making your departure flights to Vancouver; you always have the option to overnight at the Hudson Bay Lodge again. Upon arrival into Smithers, a lodge representative will help you to your connecting flight, or a hotel, if that is your choice. 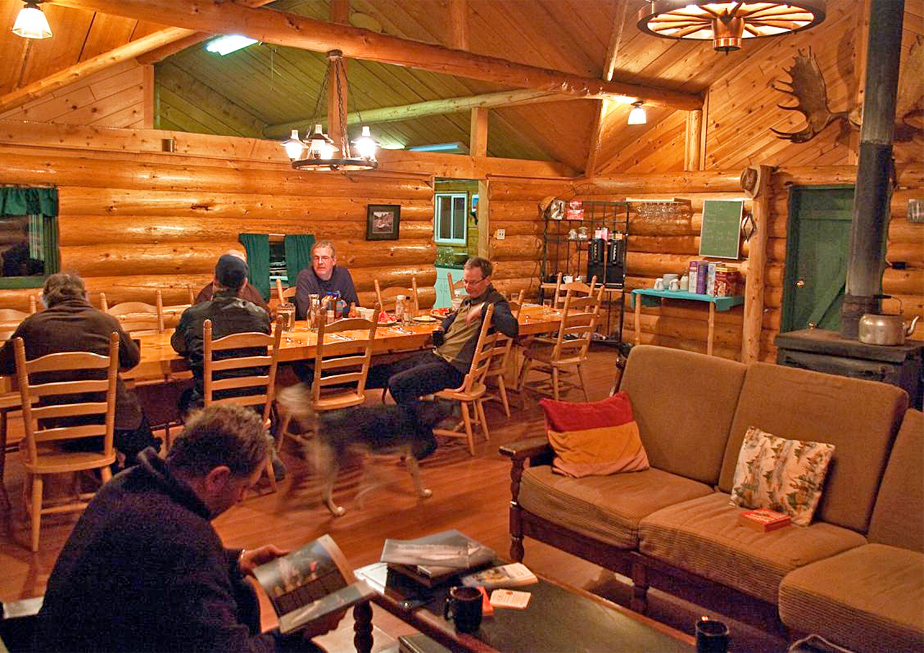 Steelhead Valhalla is located on the Sustut River in Northern British Columbia.

The Lodge itself is accessed by either helicopter or fixed wing Grand Caravan from the town of Smithers.

Lodge in a vehicle for your transfer to the lodge. It is a short drive. The main lodge building is a charming custom built log building with an expansive, open beam dining room, a fully equipped fly-tying area, and ample room to sit and enjoy drinks by the fireplace.

Guests stay in one of five guest cabins which sleep 2 anglers. Each cabin is carpeted, equipped with electric lights, warmed by wood airtight heaters, and stocked with warm bedding and towels. Valhalla Lodge has a communal bathhouse with hot showers, sinks, and flush toilets. Your time at Valhalla will be comfortable and will provide a wonderful place to spend the non-fishing hours of your day.

All meals are served in the main lodge. Meals are a blend of home cooking with homemade breads, desserts, FRESH meat, fish, and vegetables. British Columbia wines are served with all dinners. 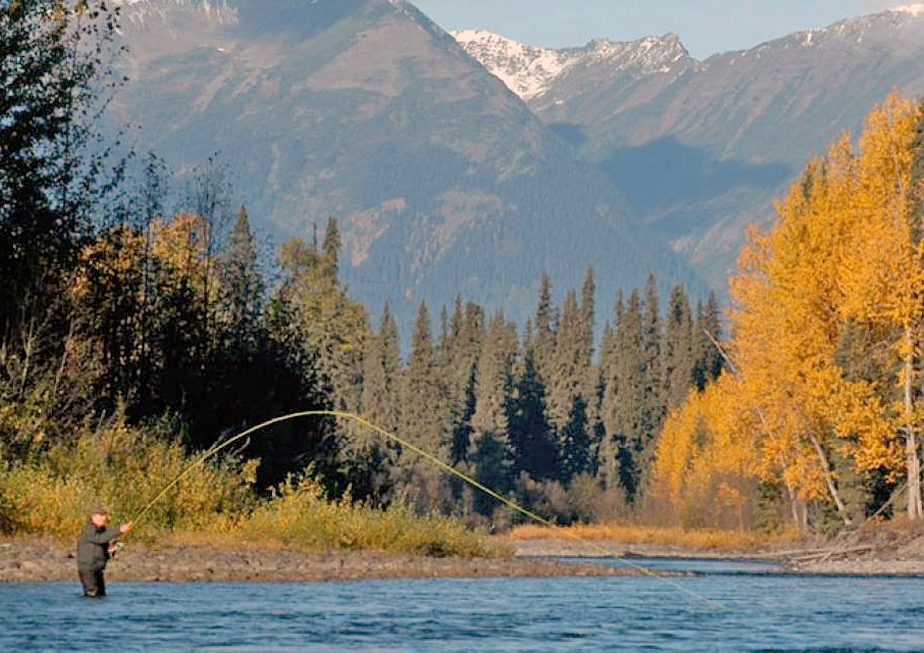 Breakfast is at 7:00 a.m. and afterwards clients depart for a full day of fishing. Lunch is prepared at the lodge each morning, or by the guide on the river. Lunch consists of homemade soups, sandwiches, bread and salads. If you have any dietary requests, please be certain to let us know ahead of time on your emergency and itinerary form so the chef can accommodate your special needs. Appetizers and dinner will be served in the evenings after everyone is back at the lodge.

One advantage of the Sustut over other steelhead fisheries (like the Babine, Bulkley, Kispiox, & Thompson) is the amount of time the river takes to clear and drop after a big storm; common in the fall in British Columbia. The Sustut claims to be the fastest dropping and quickest clearing of them all. The river can virtually be blown out one day and fishable the next.

Fishing on the Sustut is strictly catch-and-release with a single-barbless hook and, with little outside pressure, anglers enjoy a rare opportunity to fish relatively untouched water every day of the week. Most often, anglers are rotated on 3 sections of river; upper, middle and lower. Days are long at Steelhead Valhalla. Anglers will fish an average of 10 hours each day.

Steelhead on the Sustut are big, averaging twelve to fifteen pounds. Larger fish over 20 lbs are not uncommon, and occasionally a monster over 30 lbs is landed! This is trophy steelhead fishing, not a numbers game, but very rewarding to anglers willing to fish hard and put in a long day. Steelhead fishing is, we think, for the most part made to sound like a sport for tough fanatical fishermen. Granted aficionados seem to fit this mold. However, that is largely due to the fact that many steelheaders are so taken by the fish and country that they pursue the fish like their lives depend on it…in some cases for months at a time eating canned meats and aged bread by a fire.

Contrary to public opinion, steelhead are aggressive and catchable for an angler of any skill level. You do not need to be able to throw a hundred feet of line or fish a 500 grain sinking line until your shoulder gives out. Without exception, if you listen to your guide, he will steer you into fish within your ability or interest. Fishing a dry fly is something that everyone should try for a few days. It is effective on the Sustut and is the most exciting way to catch a steelhead. You may lose a higher percentage of your fish, but the take is well worth it. In the end, you won't remember whether you landed 10 or 12 fish for the week, but you will remember a fish boiling on your skated dry in a glossy tail-out.

Don't let the rest of the camp scare you out of it... because they will.

The fish on the Sustut are among B.C.'s largest. The steelhead average 14 pounds and often reach well into the high twenties. There are 30-35 pound fish landed yearly. Consequently, we recommend you come prepared and with the appropriate gear. 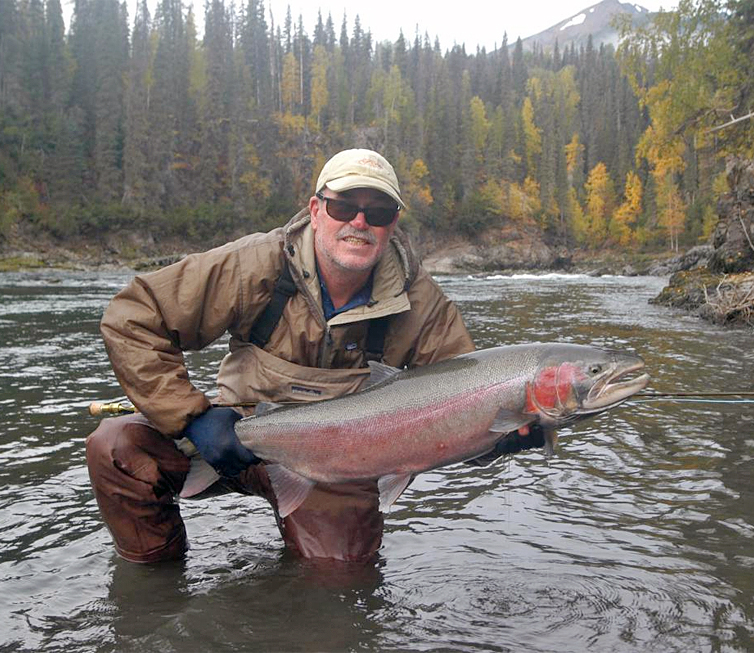 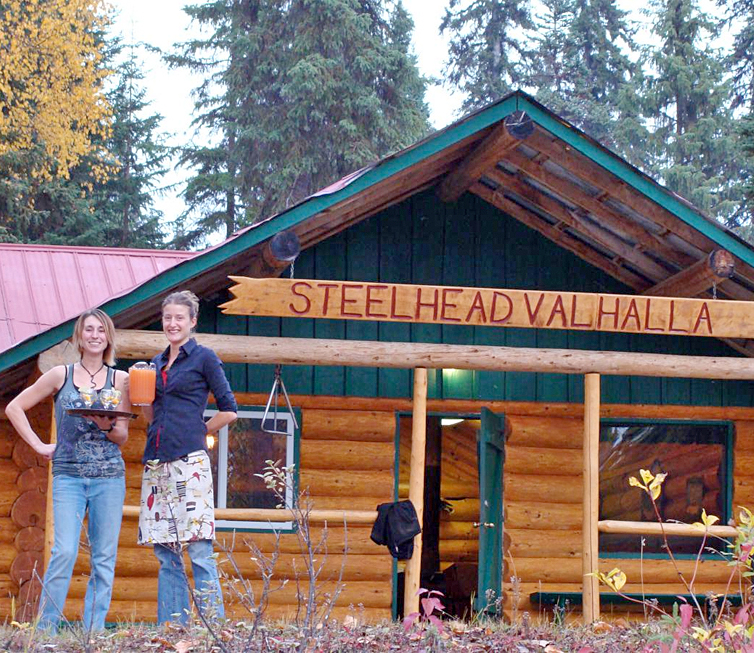 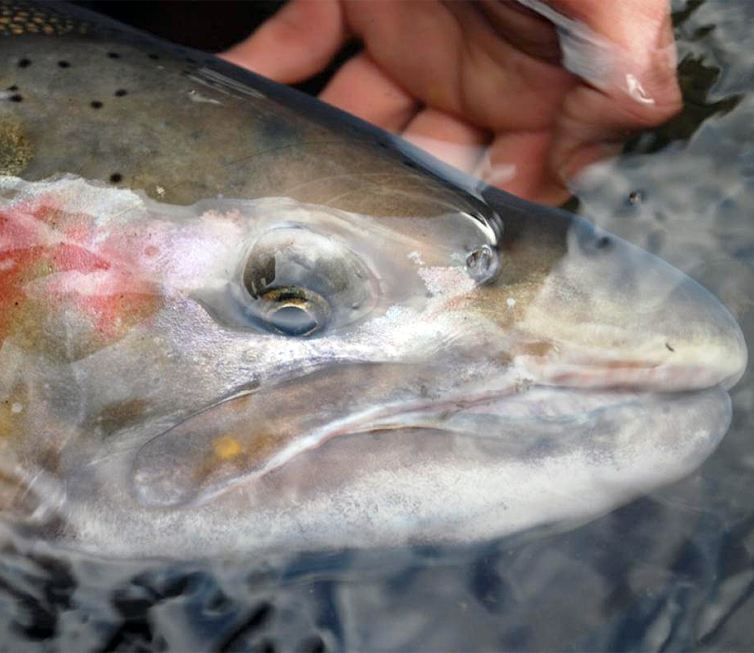 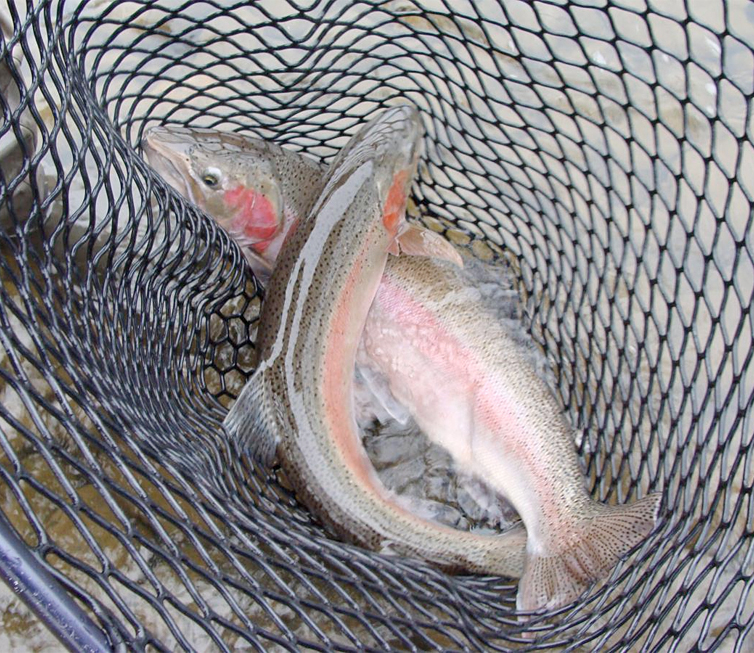 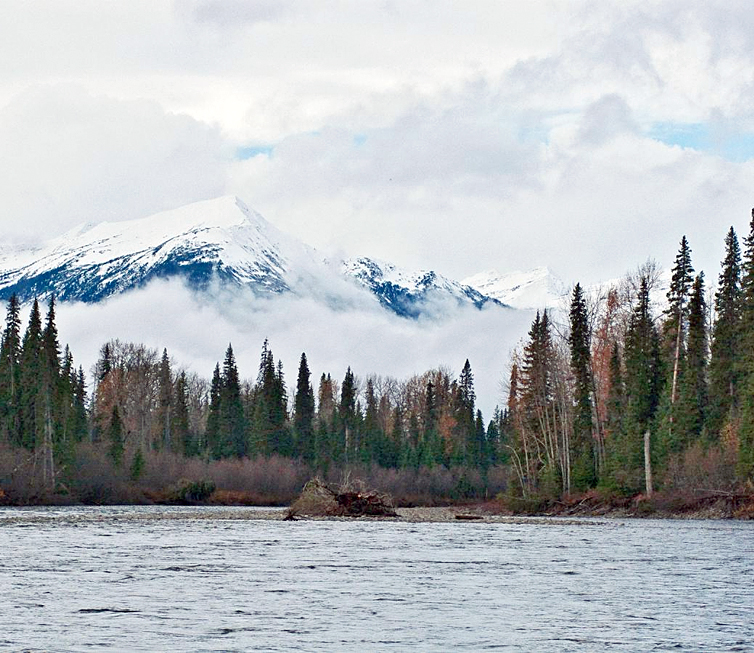 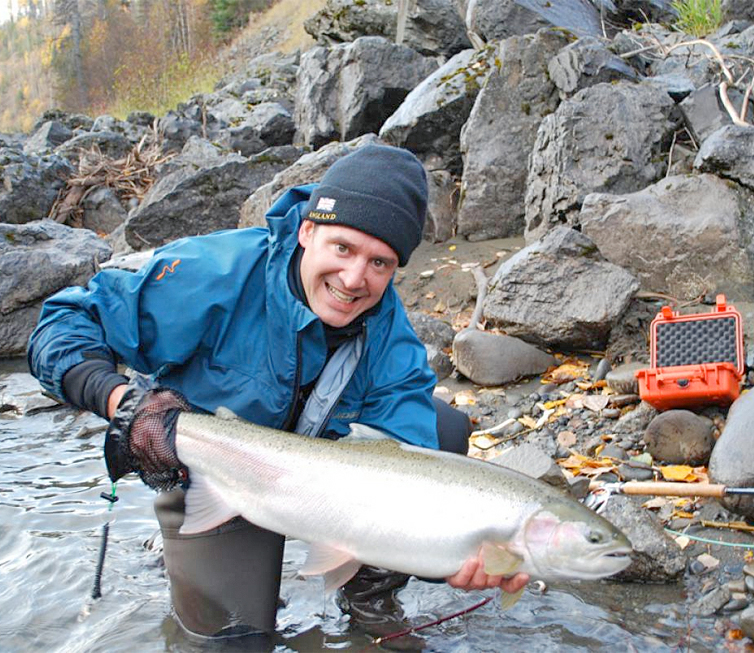 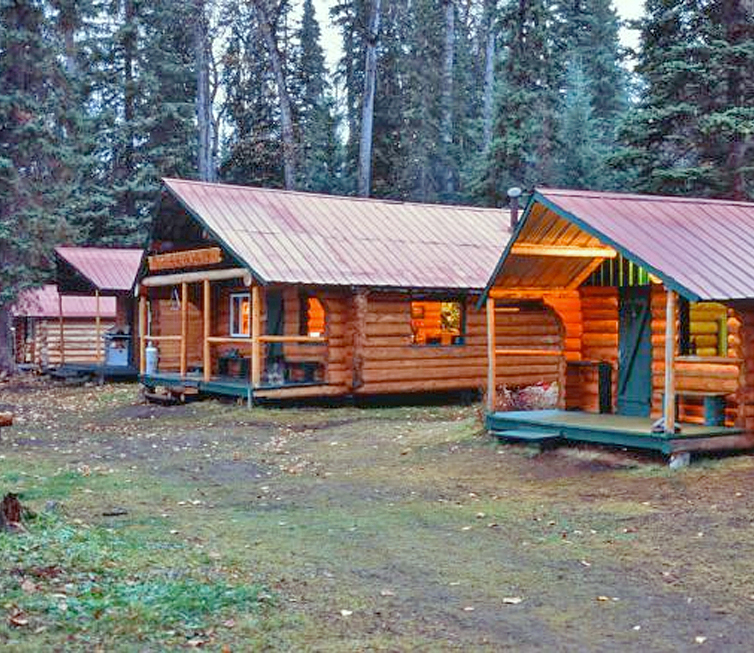 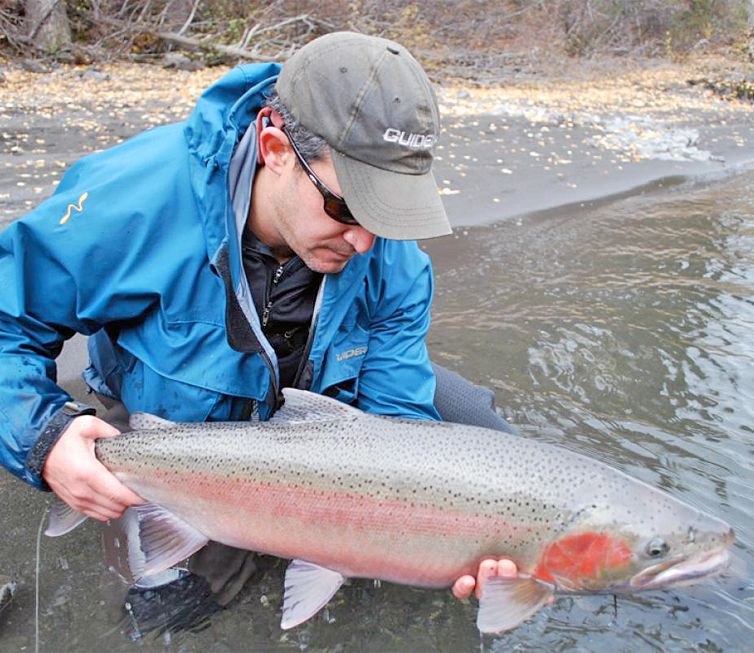 Included in your angling package at the Valhalla Lodge is round-trip charter flight – Wednesday-Wednesday (Smithers - Suskeena - Smithers), daily guided fishing, accommodations, meals, boat transportation, Canadian Goods & Service Tax, one (1) experienced guide for every three anglers, daily jet-boat transportation on the river and fishing rights from the time of your arrival until you depart. The lodge can accommodate 9 anglers maximum. Steelhead Valhalla Lodge is fly fishing only. Single barbless hooks are required.

Not included in your angling package at Valhalla Lodge are flights to and from Smithers, accommodations and meals in Smithers, British Columbia Fishing license and steelhead stamps (approximately $430.00 USD per angler, available at the lodge), and gratuities.