Justin has traveled the globe guiding and learning the The Fly Shop’s international destinations. He has guided the Kamchatka Peninsula every season since 2008, fishing the world with a spey rod, for every sea run fish he can find. After graduating from Chico State University, Justin started his career at The Fly Shop as a counselor at our acclaimed FishCamp program in 2004. After that first summer, The Fly Shop hired him on full time to work in the store located in Redding, California. He started guiding the rivers of Northern California for The Fly Shop in 2006, swinging flies with spey rods for steelhead. He started guiding the Kamchatka Peninsula in 2008 and has spent all summer, every summer, learning every river we fly to and offer on the Kamchatka Peninsula. Add all that time up and Justin has spent over a year of his life on the ground in Russia. Outside of Russia, Justin spends all his time making plans on when and how to chase steelhead, and then actually chasing steelhead, immersed in his rivers in every conceivable condition, good or bad, all around the Pacific rim and the world. He has spent an extensive amount of time swinging flies with spey rods for Steelhead in BC, Sea Trout in Tierra Del Fuego including Pacific and Atlantic Salmon. He is very excited to share his experiences as the newest member of our International Travel staff. You will be caught up with his purely infectious enthusiasm for anadromous fish.

Justin grew up fishing the Sierra Nevada Mountains for trout, with his Father, during his years as a Boy Scout. He started fly fishing on these backpacking trips and got serious about the fly rod during his summers spent as a counselor at Camp Jack Hazard on the Stanislaus River, California. He spent all summer fishing for trout with dry flies. When Justin transferred from Santa Barbara to Chico State in Northern California, fly fishing took over his life once he discovered the year round fishing and the steelhead common to the Northern California watersheds. As soon as he graduated from Chico State he was hired by The Fly Shop which sealed his fate as a professional fly fishing bum. Justin quickly got involved with all aspects of the fishing business at The Fly Shop. They hired him to the retail floor. He 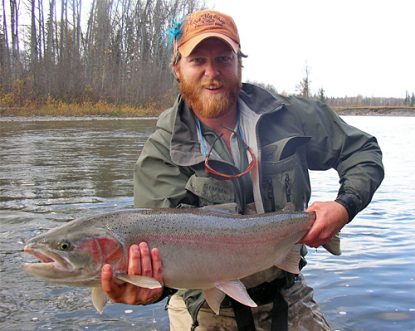 remained very active with The Fly Shop’s FishCamp Program. He got certified as an FFF casting instructor and became one of the head instructor’s at The Fly Shop’s Casting Schools. He was an instructor for The Fly Shop’s Fly Tying Classes. Justin loves to tie, especially for steelhead and stripers. Justin spent most of his off time swinging with Spey rods for Steelhead, and in 2006 started guiding the Trinity and Klamath Rivers. About that time, Justin started hosting international trips for The Fly Shop, and expanding his reach and knowledge of the world’s best fly fishing. Specializing in the spey rod, Justin has focused on the Steelhead Rivers of British Columbia, The Sea Trout of Tierra Del Fuego in Argentina, and the Atlantic Salmon on the Kola Peninsula in Russia, as well as the other Pacific salmon. He has also spent his share of time chasing fish on the flats of Mexico, Belize and the Bahamas.

In 2008 he started guiding the Kamchatka Peninsula for trout and Steelhead, and has guided every river and program that The Fly Shop manages. He is one of the worlds true experts when it comes to fly fishing Russia’s Far East, from the fish, to the gear, to the travel logistics.