Erik has spent all of his adult life guiding and chasing trout, salmon and steelhead in far off places around the globe. He spent 15 seasons guiding in Alaska and Kamchatka, and a few winters doing the same in Argentina. When he wasn’t guiding, he spent lots of time traveling and exploring rivers and lakes in New Zealand, Alaska, Argentina, British Columbia and Montana.

Growing up in western Pennsylvania, Erik always felt more at home outside exploring local waters or being in the woods. As a little kid he was constantly scouting tiny creeks and catching minnows with his net, or searching woodlots with his bb gun. 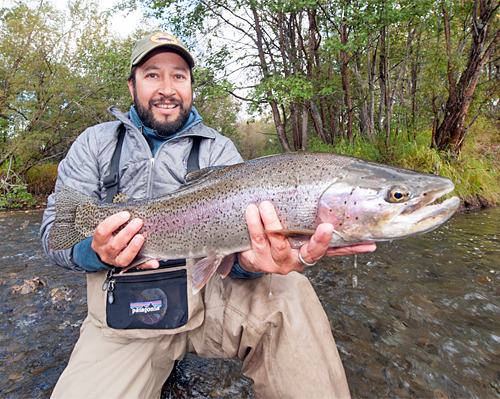 His dad would always take him out to catch trout in the local streams and lakes, and the family would go on an annual trip to Canada catching pike and smallmouth on spinning rods. At 4 he knew he wanted to move to Montana because there was so much to hunt and lots of places to fish. So at 17 when a local fly fishing club was heading to Montana on their annual fly fishing trip, Erik learned to fly fish, built his own rod, tied lots of flies and headed to Bozeman to fish the surrounding area. That pretty much sealed the deal; the next year he returned to Montana State University to attend school, bowhunt and flyfish.

Within a couple years he was headed to Alaska to guide. He graduated from MSU with a Bachelors of Science in teaching, with a minor in Earth Science. Erik worked in remote destinations guiding and spending the off-season traveling around the world – an 18-day canoe trip in Argentina; floating 40 miles on the American Creek in Alaska; buying a car and living out of it for 3 months while fishing the South Island of New Zealand; and spending a month exploring the rivers around British Columbia, Canada.

Erik is thrilled to be part of The Fly Shop® team, who pride themselves on servicing their travel clientele and finding the next new far-off, unexplored fly fishing destination. It’s a perfect way for him to share his passion of fly-fishing and travel with anyone interested in going on the trip of a lifetime.

If not out looking for fish, Erik loves bowhunting for bugling bulls, whitetails, and antelope, or taking his two pointers in search of upland birds in the high steppes of the West.

With two children – Augustus (9 years) and Henry (4 years) – Erik enjoys spending their free time outdoors; along the rivers camping and fishing, hiking to mountain lakes and waterfalls, or taking a dip in the local swimming holes. If they have a chance to be outside, they are in!