Look up “classic Alaskan fly fishing lodge” in the dictionary, and there is a picture of Bob Cusack’s operation.

Situated in a protected cove on the shores of famous Lake Iliamna, you couldn’t ask for a more idyllic setting. Look one direction out the window of your two-story room, and you see pristine wooded wilderness, mixed with small tundra meadows; glance the other way, and you see nothing but rocky, forested islands and lake. Squint really hard and you might just make out the mouth of the famous Copper River (where you’ll spend a few days of your stay), and just out of sight (about a 10-minute floatplane flight away) is the spectacular, trout-filled little Gibralter River. And there are many other amazing trout and salmon fisheries within a 45-minute flight. 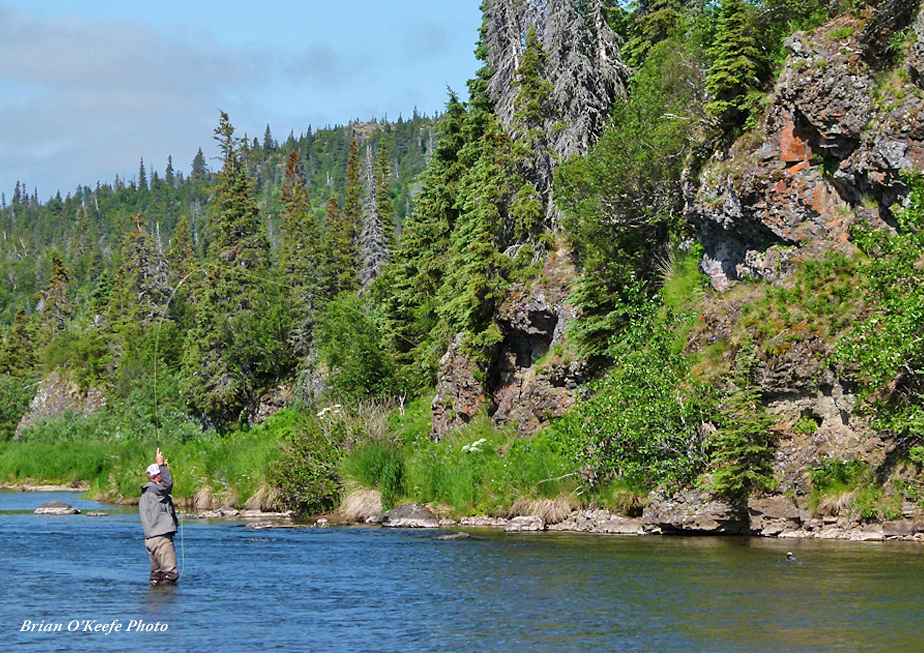 The cost of the week-long Bob Cusack's Alaska Lodge package is $6,400.00 per person

Included in your angling package at the Bob Cusack's Alaska Lodge are the flights between the Iliamna Airport and the lodge, guided fishing, all meals and accommodations, and fly out trips daily - 3 days to the Copper River (home water) and 3 days to other superb local streams and rivers.

Not included in your angling package at Bob Cusack's Alaska Lodge are flights between Anchorage and Iliamna, fishing license, gratuities, alcohol, fishing gear (though loaner gear can be arranged, on request), or items of a personal nature. 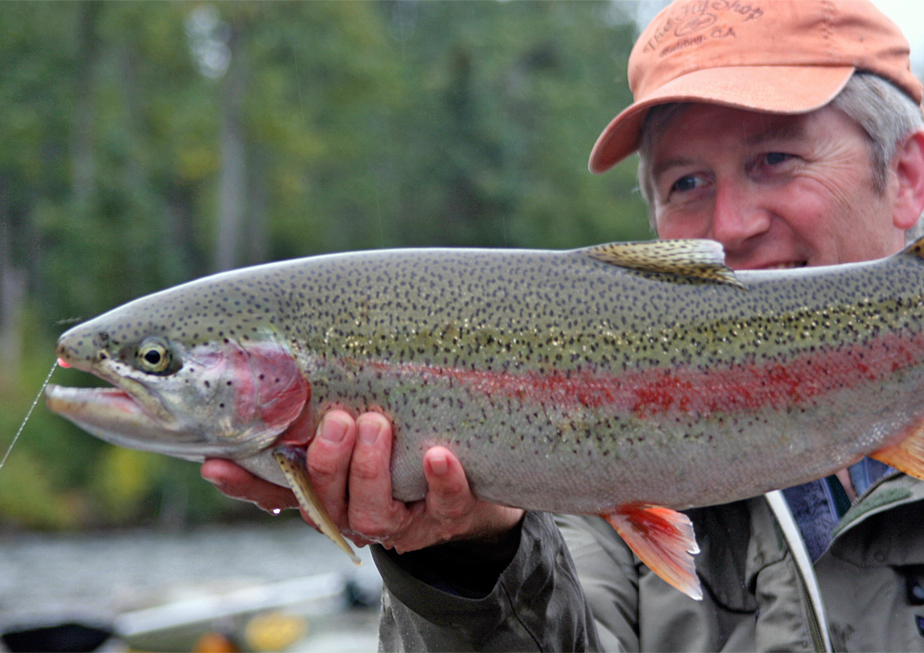 Each June and early July the stream experiences strong hatches of caddis, small stones, and a variety of mayflies, and the river's healthy population of rainbows take full advantage of this floating smorgasbord. A typical early season day sees anglers fishing nymphs beneath indicators during

the normally cool mornings, switching to dry flies after lunch when warming temperatures spark prolific hatches. Small streamers, imitating the masses of outgoing sockeye salmon smolt, are also very effective, and sometimes account for the largest fish of each day. A fly out to the Gibralter River normally entails a full day float, with streamers and skated mouse patterns normally producing excellent daylong action. As well, for those who love to fish dries all day long in beautiful surroundings, Bob has some "sleeper" streams that are loaded with 12-16 inch rainbows, are fished by no-one else, and provide non-stop action on attractor dries.

In early July immense squadrons of sockeye salmon invade the all of the local rivers, and change the fisheries dramatically. Suddenly, every run, riffle and pool are flooded with these chrome sea-runs, which quickly morph into their Discovery Channel wardrobes of brilliant reds and vivid greens. Before long they are pairing up, digging spawning redds, and laying eggs in numbers that stagger the imagination. Suddenly, trout that had weeks before been perfectly satisfied chomping nymphs, sipping dries, or chasing streamers now have eyes only for this massive infusion of protein that literally surrounds them. Dead-drifting single egg patterns and beads becomes highly productive, and trout that had previously been healthy by any standards, now quickly lapse into figures defined by gluttony. Many rivers fished by the lodge harbor excellent numbers of 18-23 inch trout during the months of July and August. Also, from mid-August through early September, Cusacks routinely flies anglers to small coastal rivers that fill with dime-bright silver salmon and sea run dollies, making for a fun diversion from the daily rainbows. Late July sees a good push of chum salmon here, as well, which are a great fly rod fish.

By early September, the sockeyes are fading into memory, but their decomposing carcasses provide one last major feeding binge for all of the region's streams. This is the single best month for serious trophy trout hunters, as good numbers of over-sized rainbows ascend (and descend) from area lakes into integral rivers. If you are going to have a chance at the elusive 30-inch trout, this is when it will most likely occur. Anglers still do well on egg patterns, but streamers emulating chunks of rotting salmon flesh are very productive now, and often account for the largest rainbows. The changing colors are spectacular, and the rivers are full of big trout. 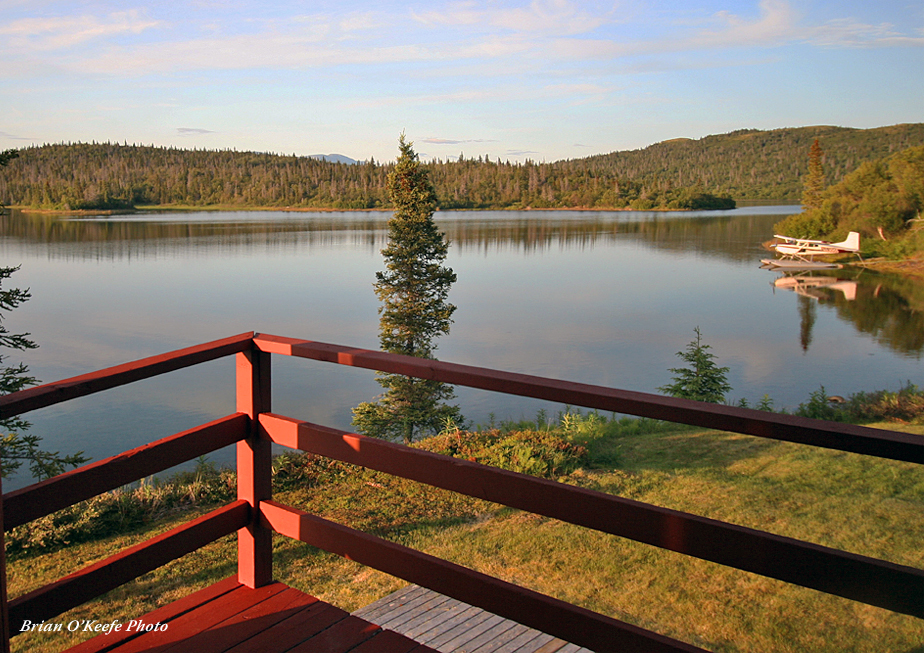 Getting to Cusack's Alaska Lodge

The progressive air services you'll use to reach Cusack's Alaska Lodge are a wonderful reflection of your journey into the wilderness.

First, you will fly a major jet service from near your home to Anchorage, Alaska; arriving here, most itineraries will mandate an overnight stay. The next morning you will board a plane piloted by one of the fine bush pilots of Lake Clark Air for the transfer between Anchorage and the little village of Iliamna.

Upon arriving, Lake Clark Air Taxi's Iliamna crew will switch your gear from the mid-sized plane to a smaller, lodge-owned float-equipped Beaver, and after a short wait you will be on the final leg of your adventure, touching down on the lake's surface in front of Bob's lodge a short thirty minutes later. For the remainder of your week, you will be flying into amazingly beautiful country in the lodges Beavers, giving you a peek into the enormity and grandeur of their corner of Alaska. 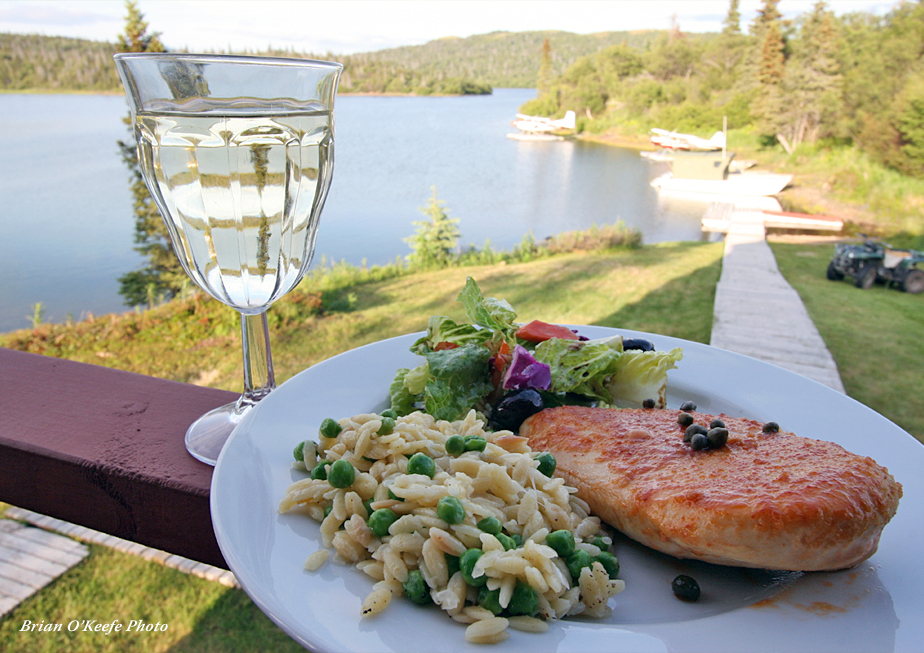 Bob and Lula's handsome two-story log lodge sits on a narrow strip of wonderfully-kept-yet-unlikely Bermuda grass lawn between the shore of Lake Iliamna, and the pristine wilderness that surrounds it.

It is not unusual for the occasional brown bear or moose to stroll through the property, as this is truly their home. There are convenient wood walkways connecting the lodge to the lakefront (where guests will board

the floatplanes daily), and from the lodge to the wader "mud" cabin, where anglers change in and out of their waders, and assemble their tackle daily. Downstairs in the lodge contains the dining room, kitchen, gathering room with wood stove, and two bedrooms; upstairs are the main guest quarters. The lodge is immaculately kept, warm and inviting, a wonderful home-away-from-home in the wilderness. 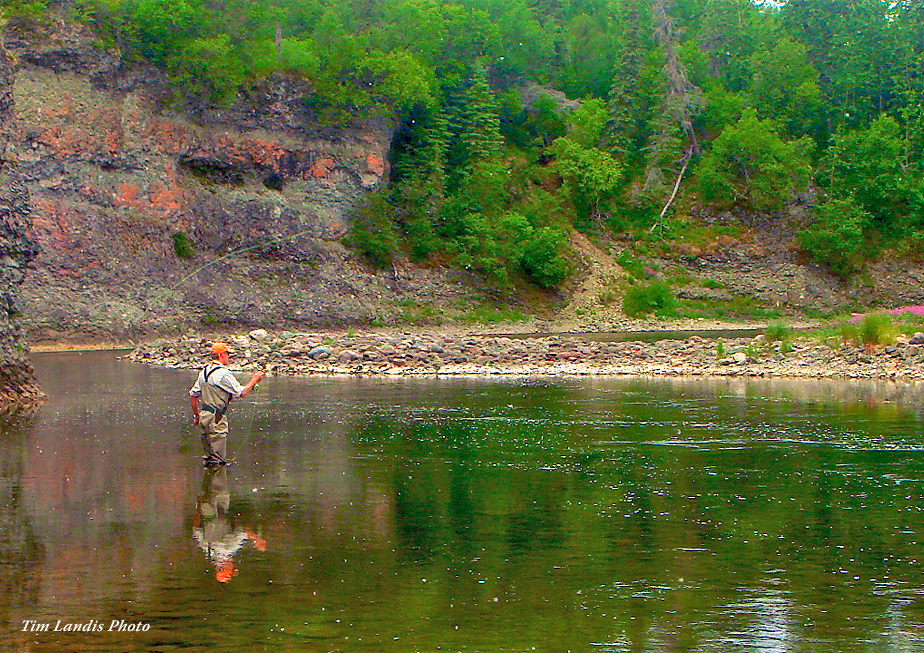 The fishing from Cusack's Lodge is two-pronged. Three days will be spent making a short flight from the lodge to nearby Rainbow River Lodge, where jet boats await to bring anglers to the adjacent Copper River; or a flight to an upper stretch of the Copper to start a daylong float. The other three days are spent flying out to any number of other rivers that harbor amazing rainbow trout, Dolly Varden, or ocean-fresh salmon.

The upper Copper River float is a special experience, with mile upon mile of stream with little or no outside pressure. This upper corridor is virtually untouched, it's pristine banks lush with foliage, and dense with a mix of evergreens and hardwoods. As a switch from the normal jet boat access to this river, the day float is a highly recommended option.

Another local favorite river is the Gibralter River; after a hearty breakfast feast, you'll load into a waiting Beaver, and make the quick flight over to Gibralter Lake, your jumping off destination for the day's float. Your guide will inflate the raft, and two anglers and a guide will ease into the stream's mouth to begin the downstream descent. The Gibralter is really more creek than river, a smallish stream connecting two major lakes – Gibralter and Iliamna – and is a fun fishery to spend a day on. While you can certainly fish from your raft on the way down, the real action occurs when the guide pulls to the edge of productive riffles and runs, and shows you the secrets of catching what are largely lake-run trout (coming upriver from Iliamna Lake, or dropping down from Gibralter Lake). Particularly in August and September, this little river can provide almost non-stop action for trout of all sizes; the majority are in the 12"-20" class, but fish in the mid-twenties are often daily occurrences. It is a great destination for novices and experts alike, and many people insist on two days here.

If you would like a shot at salmon and char during your stay, the lodge will normally watch for the best weather day to fly to the coast, and plan to make a day of it. The flight is spectacular, gradually climbing through tundra hills with cascading waterfalls and frequent animal sightings, finally cresting over the coastal mountains and out over the ocean itself. Though the flight alone is worth the price of admission, the salmon fishing on these remote rivers is superb, with anglers catching chrome-bright fish only hours from the sea. Bring your camera for this day, not only for the flight, but for the frequent brown bear sightings along the streams. Amazing!

Every day upon return to the lodge, Bob will have wonderful appetizers ready for you, followed shortly by dinners you will not soon forget. Stuffed, you can waddle over and collapse in the gathering room overlooking the lake, and tell stories from the day as loons call into the dusk outside the lodge. Relax, you are really here, and tomorrow, another adventure awaits.

• The lodge’s home water – the Copper River, where guests will normally spend three of their fishing days – is one of the most beautiful and productive rivers in Bristol Bay. Guests spend each of these days on water that can be reached first via floatplane and then by jet boat. Fishing for beautifully-marked rainbow trout here is for a mix of resident and lake-run fish…no matter the season, there are always plenty of fish in the Copper.

• For the very reasonable rate of $6,400, guests are treated to three days of flying out to various other streams and rivers in the area, to fish for their preference of big rainbows, Dolly Varden, grayling, or ocean-bright salmon. The flights over this spectacular country are incredible, and guest’s destinations of choice will give them access to some of the best fisheries in Alaska.

• Guests get to enjoy the company of Bob Cusack (at the lodge he built almost forty years ago), a true Alaskan pioneer who has spent nearly fifty years fishing and hunting in the bush. His stories are amazing, in turn hilarious and engrossing – he is the real deal. Then daily, anglers will load into beautiful floatplanes with highly skilled professional guides to fly to some of the best rivers, waters that are only accessible via flying. 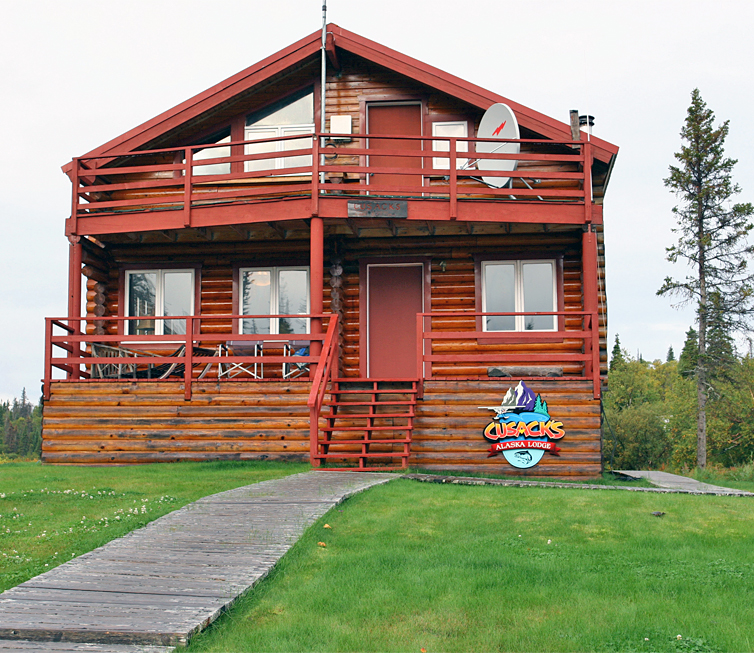 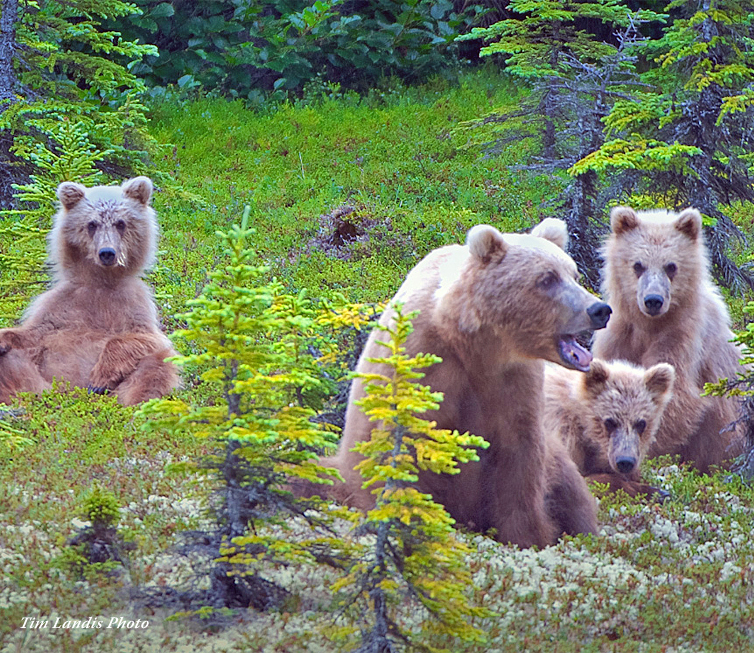 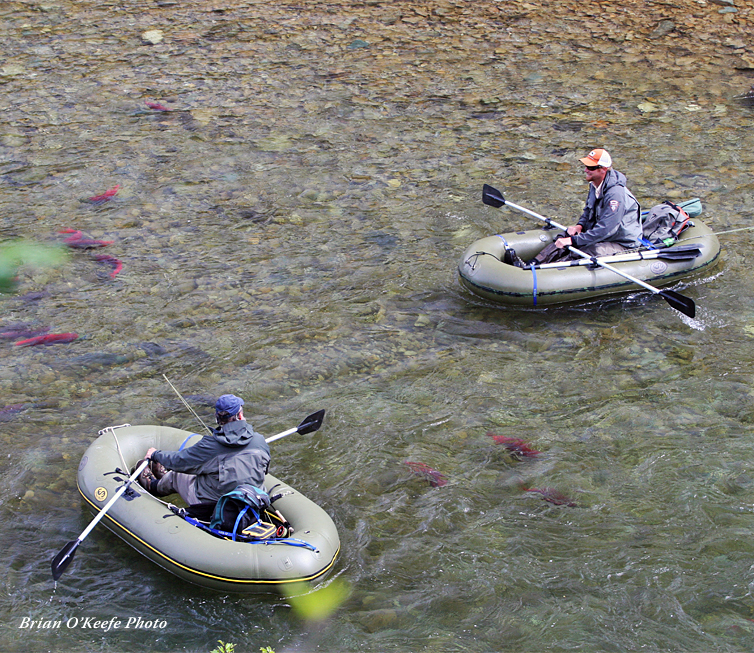 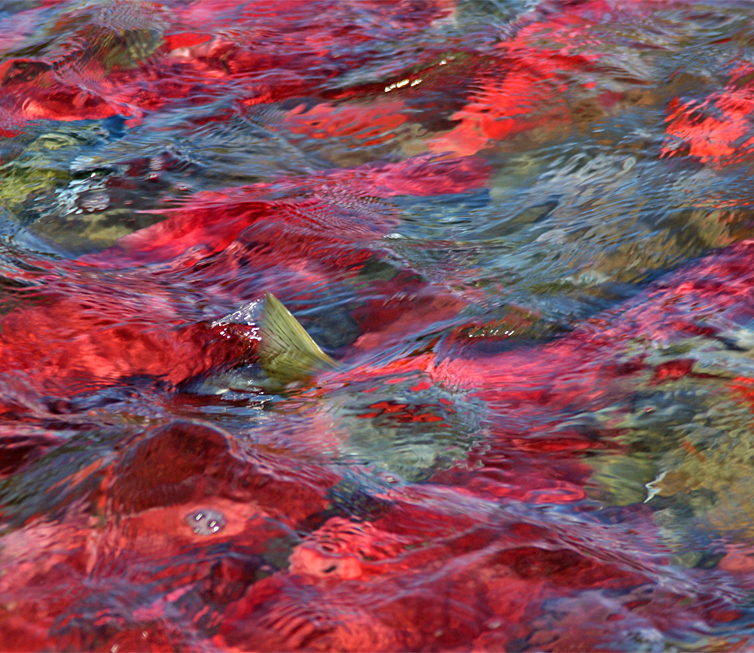 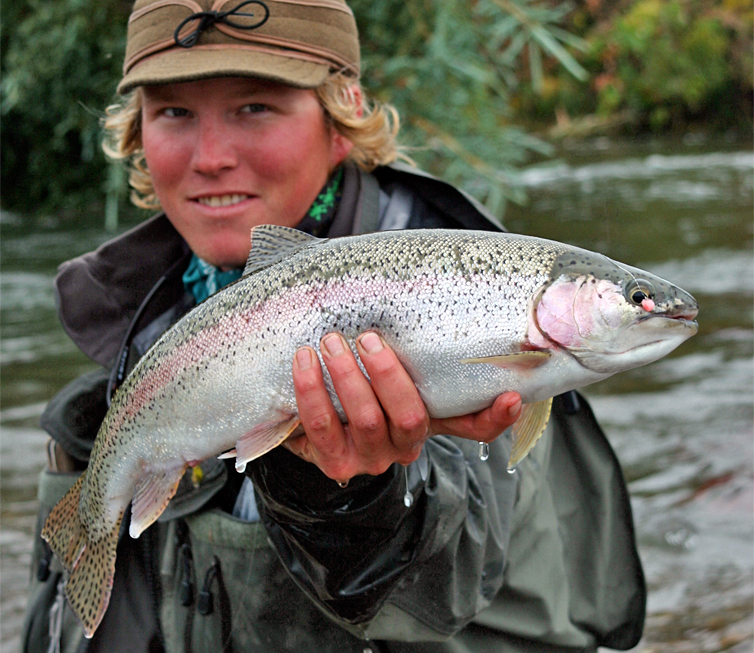 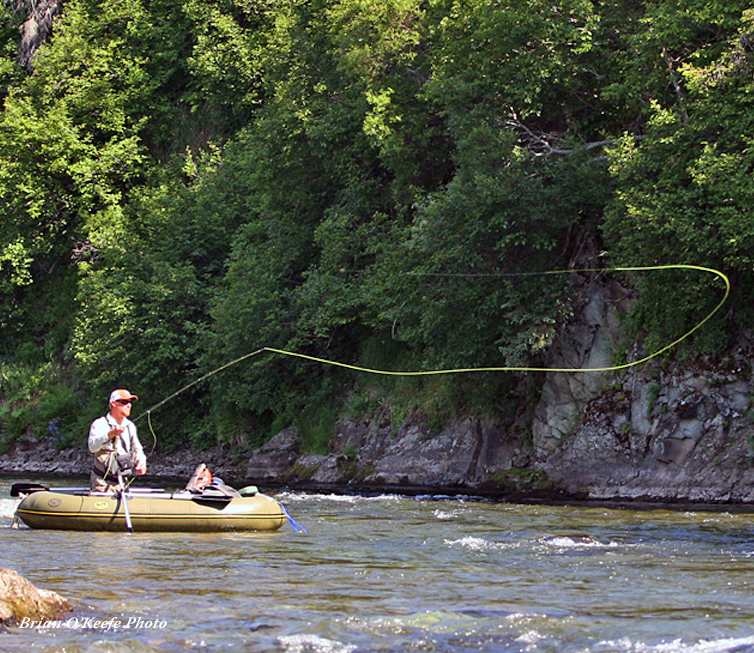 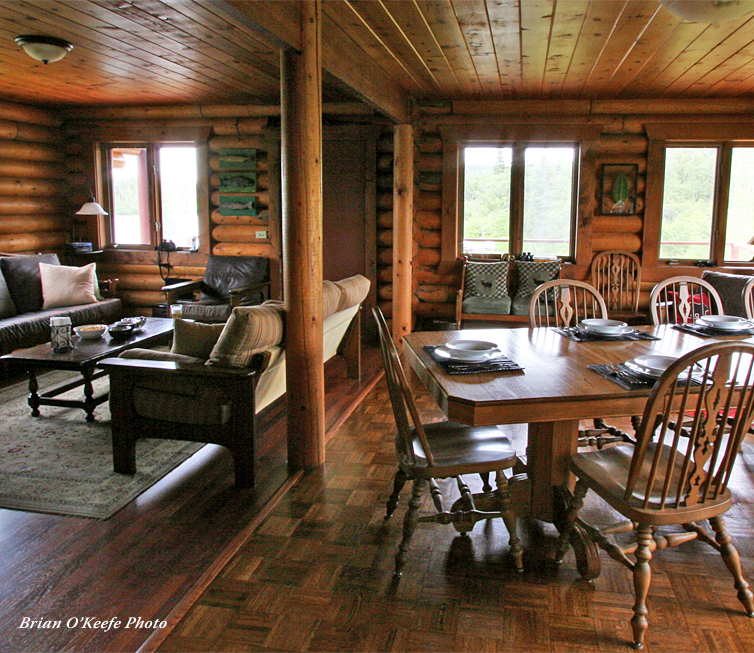 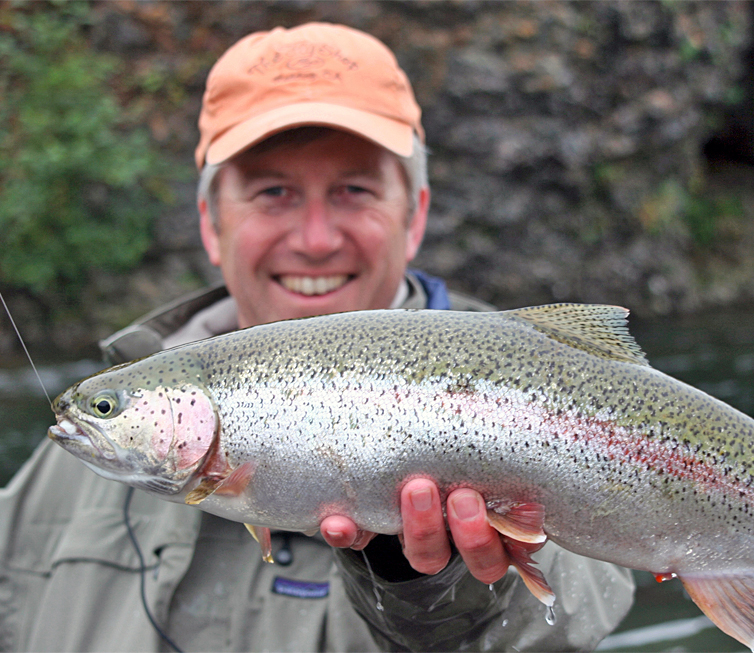 Included in your angling package at the Bob Cusack's Alaska Lodge are the flights between the Iliamna Airport and the lodge, guided fishing, all meals and accommodations, and fly out trips daily - 3 days to the Copper River (home water) and 3 days to other superb local streams and rivers.

Not included in your angling package at Bob Cusack's Alaska Lodge are flights between Anchorage and Iliamna, fishing license, gratuities, alcohol, fishing gear (though loaner gear can be arranged, on request), or items of a personal nature.