Located right on the banks of the famed Copper River near Iliamna, Alaska, this is, arguably, the most beautiful location and one of the finer fishing locations for rainbow trout in our 49th state.

It is Alaska the way most anglers imagine it to be — a shallow, crystal clear stream, alive with trout and salmon, flowing through an evergreen forest teeming with wildlife. The lodge itself is new and beautiful, renowned for the quality of its guides, and takes only 6 anglers per week, guaranteeing an intimate, personalized experience. Guides use jet boats to access many miles of the Copper River, and utilize a larger lake boat to cross a portion of Lake Iliamna to access yet another great trout fishery, the Gibralter, on days when the wind and weather allow. The food is delicious, prepared from scratch daily, and presented with a pleasing flair…you won’t be losing any weight here! This is an excellent choice for the serious trout addict who prefers smaller, clear streams, and who has little interest in other species. 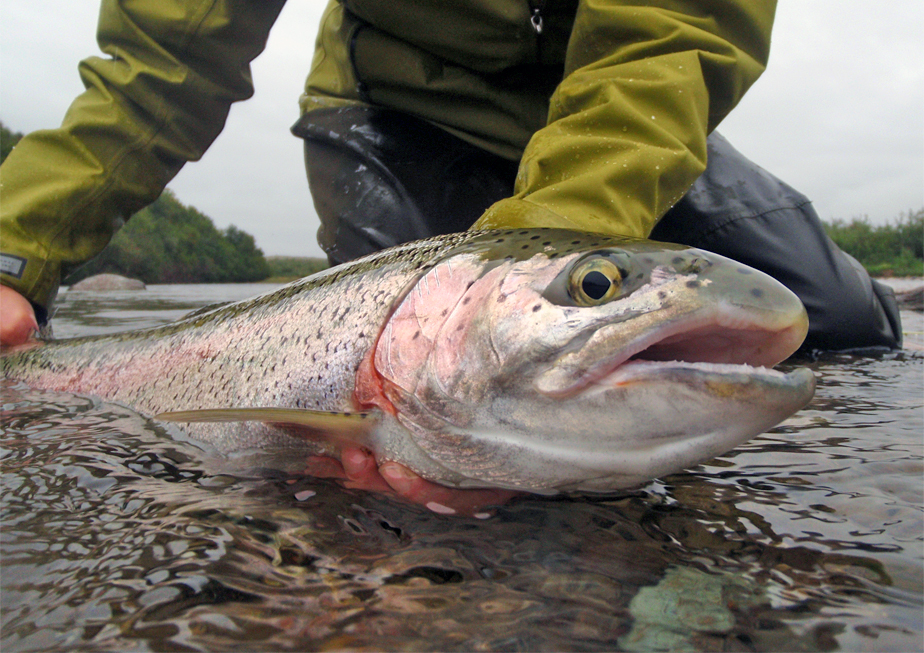 We have been traveling to and fishing with Copper River Lodge for decades; we know the lodge, the rivers, the staff... and can tell you all you need to know about this superb destination.

Included in your angling package at the Copper River Lodge is six nights/six days guided fishing (2-to-1 guest to guide ratio), room and board, float plane transportation between Iliamna and the lodge, flies, and local and state taxes.

Not included in your angling package at Copper River Lodge are flights to and from Alaska, roundtrip airfare to and from the village of Iliamna, fishing license, gratuities, alcohol, fishing gear, or items of a personal nature. 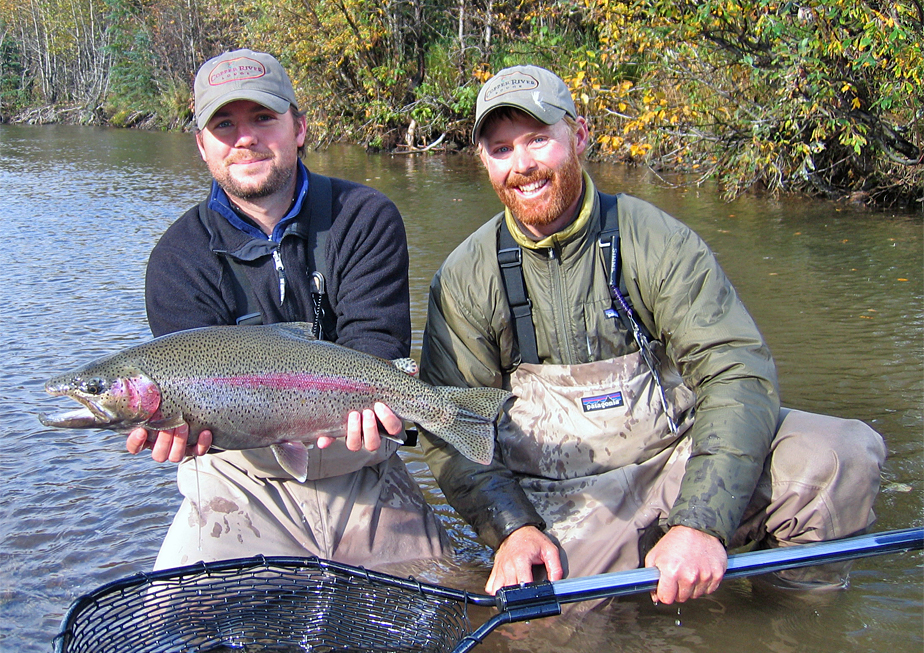 Each June and early July the stream experiences strong hatches of caddis, small stones, and a variety of mayflies, and the river's healthy population of big rainbows take full advantage of this floating smorgasbord. A typical early season day sees anglers fishing nymphs beneath indicators

during the normally cool mornings, switching to dry flies after lunch when warming temperatures spark prolific hatches. Small streamers, imitating the masses of outgoing sockeye salmon smolt, are also very effective, and sometimes account for the largest fish of each day. A boat trip out of the Copper into Lake Iliamna, then up the "coast" to the Gibralter River normally is often another option, with streamers normally producing excellent daylong action.

In early July immense squadrons of sockeye salmon invade the Copper and Gibralter rivers, and change the fisheries dramatically. Suddenly, every run, riffle and pool are flooded with these chrome sea-runs, which quickly morph into their Discovery Channel wardrobes of brilliant reds and vivid greens. Before long they are pairing up, digging spawning redds, and laying eggs in numbers that stagger the imagination. Suddenly, trout that had weeks before been perfectly satisfied chomping nymphs and sipping dries, now have eyes only for this massive infusion of protein that literally surrounds them. Dead-drifting single egg patterns becomes highly productive, and trout that had previously been healthy by any standards, now quickly lapse into figures defined by gluttony. The Copper River tends to harbor excellent numbers of 18-23 inch trout during the months of July and August, while the Gibralter is just stupid with numbers of rainbows, of all sizes.

By early September, the sockeyes are fading into memory, but their decomposing carcasses provide one last major feeding binge for all of the region's streams. This is the single best month for serious trophy trout hunters, as good numbers of oversized rainbows ascend (and descend) from area lakes into integral rivers. If you are going to have a chance at the elusive 30-inch trout, this is when it will most likely occur. Anglers still do well on egg patterns, but streamers emulating chunks of rotting salmon flesh are very productive now, and often account for the largest rainbows. The changing colors are spectacular this time of year, and the Copper River is normally full of big trout. 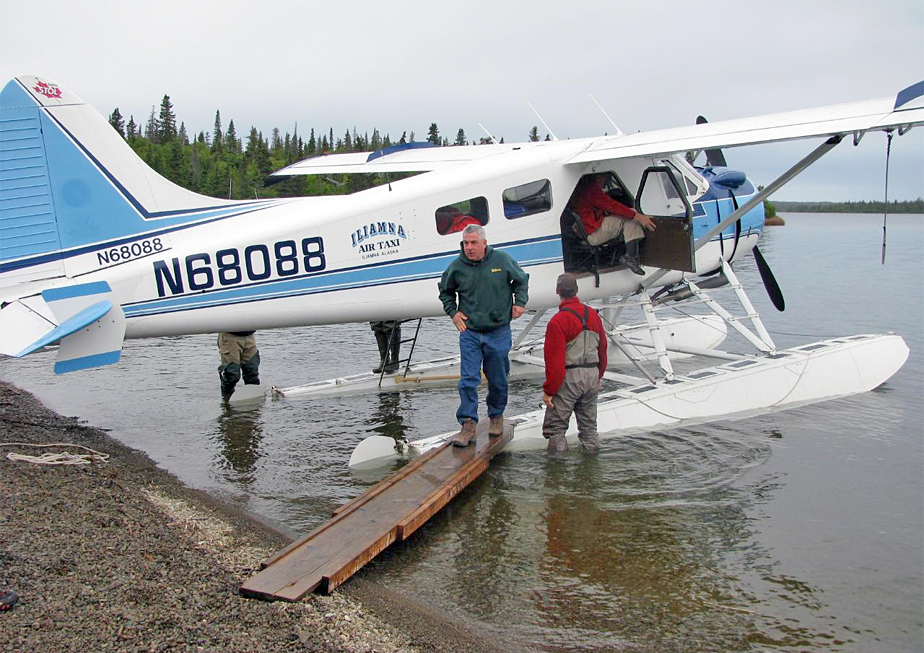 Getting to Copper River Lodge

On the day prior to your arrival in camp (Saturday) you should plan on traveling to Anchorage and overnighting. The next morning, Sunday, you will arrive in Iliamna on the afternoon (Iliamna Air Taxi, 907-571-1245) flight from Anchorage. When booking this flight, be sure and tell the carrier that you're clients of Copper River Lodge, as they'll have a seat reserved for you already… you just need to pay for it. It will take some time for luggage to be unloaded from the plane in Iliamna, so relax;

you're on bush time now! Once you get off the plane, walk over to the Iliamna Air Taxi building. Iliamna Air Taxi is owned by Tim and Nancy La Porte, who have been providing safe air travel in the Bush for well over three decades. The La Portes may be a little busy turning around various flights, so please be patient. Give the folks at Iliamna Air Taxi your name and indicate that you are guests at Copper River Lodge. The lodge will have furnished them with a list of guests, so they'll be expecting you. The La Portes will then put you on one of their floatplanes for the short 20-minute flight to the mouth of the Copper, arriving about 6:30pm.

You will be met at the mouth of the river with jet boats that will transfer you to the lodge. After arriving at the lodge there will be ample time to settle into your room, set up your fishing equipment, have fishing licenses issued (if needed) and receive a brief orientation. As soon as everyone is organized, they'll meet at the dock and head out for your first day of fishing. A lunch will be packed and ready to eat on the river.

The schedule is for a Saturday afternoon departure from the Lodge back to Iliamna, allowing you to fish that morning. Depart Iliamna via Iliamna Air Taxi. You'll want to schedule a late evening flight out of Anchorage for home, or overnight and go out the next morning, as you'll arrive back to Anchorage after 5:00pm. 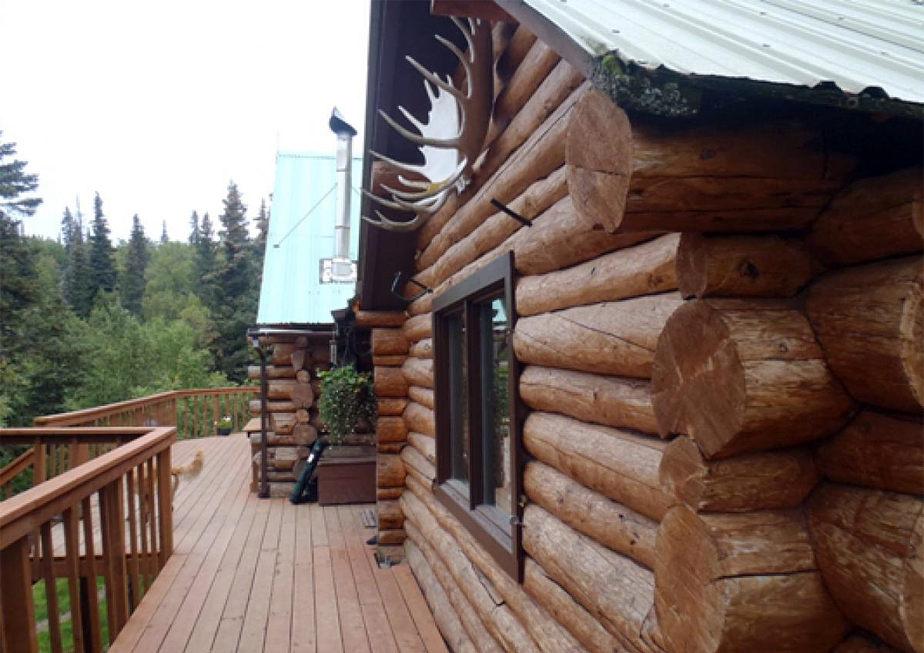 Copper River Lodge is the epitome of rustic comfortable.

The old lodge was abandoned in 2014, and a whole new lodge erected. It is beautiful, with spacious cabins, ensuite bathrooms, comfortable great room, and amazing food. 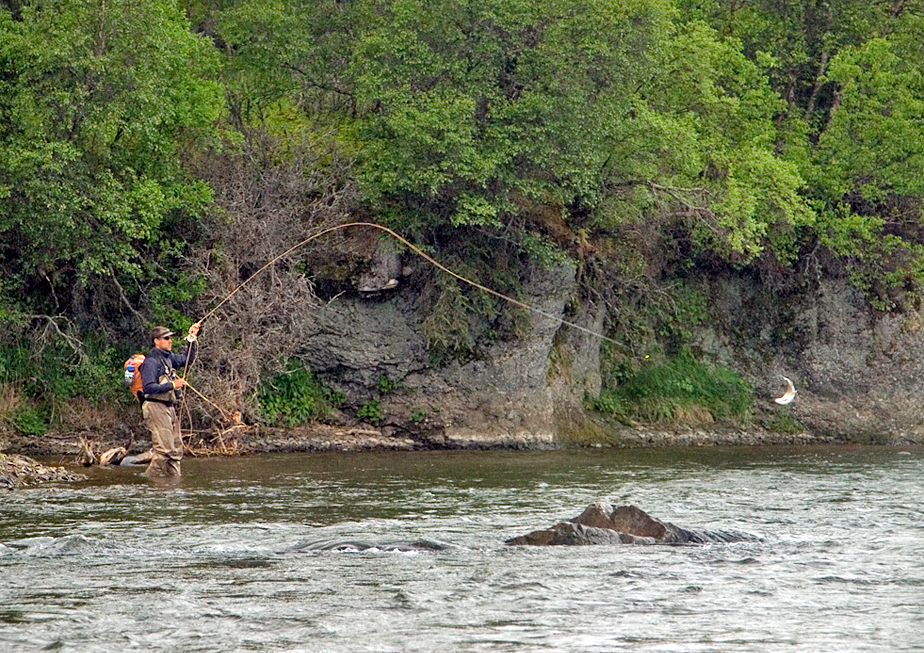 One of the great advantages of a river-based operation is flexibility in the daily fishing program… you are right on the water, and don't have travel time to factor into your day.

And at Copper River Lodge, with only 6 guests, if you prefer to sleep in, or get up extra early... no problem, the crew will make it happen. The level of personalized service is superb. Once you have gotten up and enjoyed

your choice of breakfast options, you will meet your guide down at the dock (2 anglers per boat/guide), and be off in your jet boat for a day covering the many gorgeous miles of the magnificent Copper. This river is smallish, just large enough to accommodate the lodge's jet-powered skiffs, and easily waded after arriving to the various fishing waters. Lunches are normally taken streamside, allowing for maximum fishing hours. Each day you will find new favorite pools, and have the option of returning to them, or exploring for new adventures. As each day draws to a close, tired anglers are boated back to the lodge, and the awaiting hot showers, appetizers and amazing dinner entrees.

• One of the most beautiful trout streams in Alaska, (the first catch & release designated river in Alaska) the Copper is also one of the few that has good insect hatches. This means there are good numbers of resident trout in the stream in June and July (eating dry flies and nymphs). At a time when many local streams have marginal fishing with not a lot of resident trout, Copper River Lodge guests have plenty of rainbows to fish to.

• Copper River Lodge is famous for superb guides. Many of the large rainbows here are caught in very shallow water, so having a guide put you in the correct casting position is important. Regardless of your skill level, the guides will work with you to catch lots of big rainbows, and you will leave at week’s end a better angler.

• The lodge is fairly new and very well-appointed, built on a cliff overlooking the river. Comfortable double occupancy rooms with spectacular views and ensuite bathrooms/showers insure your time off the river is also memorable. Between the hard-working staff and the beautiful facilities, your stay at Copper River Lodge will leave you relaxed and refreshed, heading home in better shape than when you arrived!

• Jet boats are used to transport anglers up and downstream from the lodge, and then parked so anglers can walk and wade the shallow gravel riffles and runs. These boats access miles of river quickly and comfortably, and unlike floaters who can only float downstream, anglers with jet sleds can run both up and down the river all day long, accessing the best water at the best time. Even if they end up downstream of the lodge at day’s end, with jet boats, guests easily return to the comfort of their cozy cabins each night.

• The lodge has various fishing options for those wanting to change things up. The guides can use the lodge’s large lake boat to go down the Copper to Lake Iliamna, then up the shores to Gibraltar River, another stream that can also provide phenomenal trout fishing. As well, it is an option to take a float plane to the upper reaches of the Copper, where guides will row anglers back to the lodge in inflatable rafts; this is a spectacularly beautiful float, and filled with fish that do not get a ton of pressure and are eager to eat. This variety of options allows guests to see more of the surrounding countryside and wildlife! 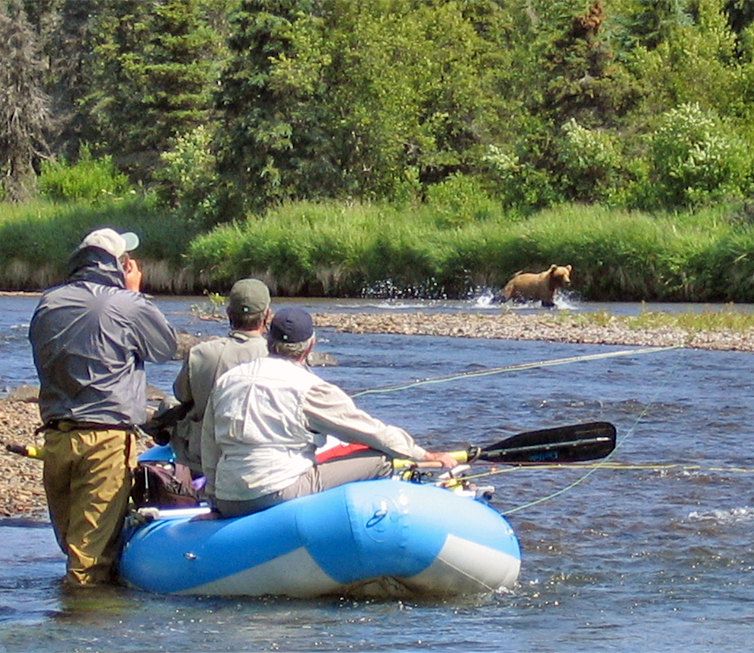 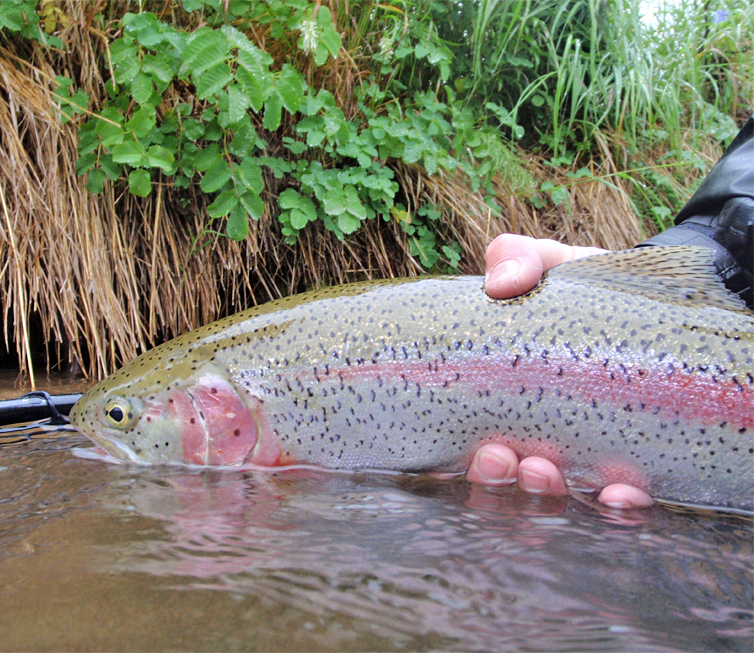 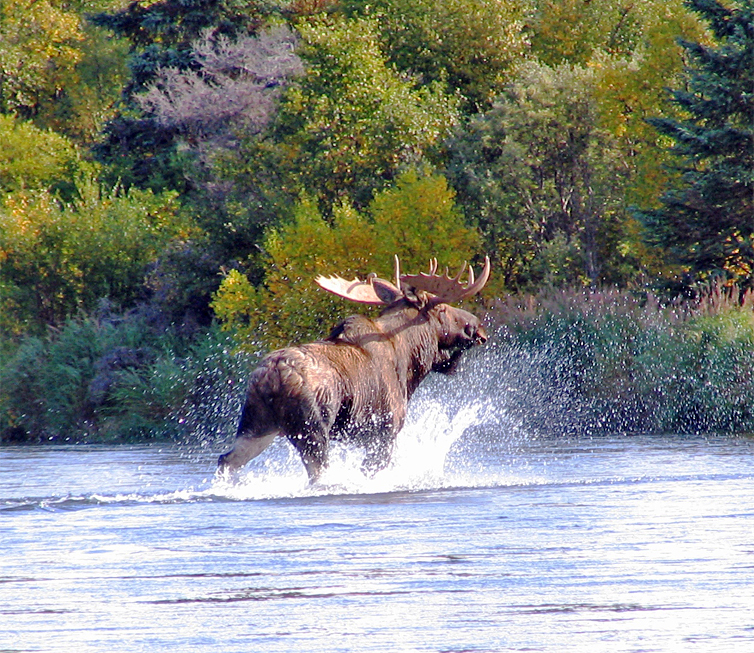 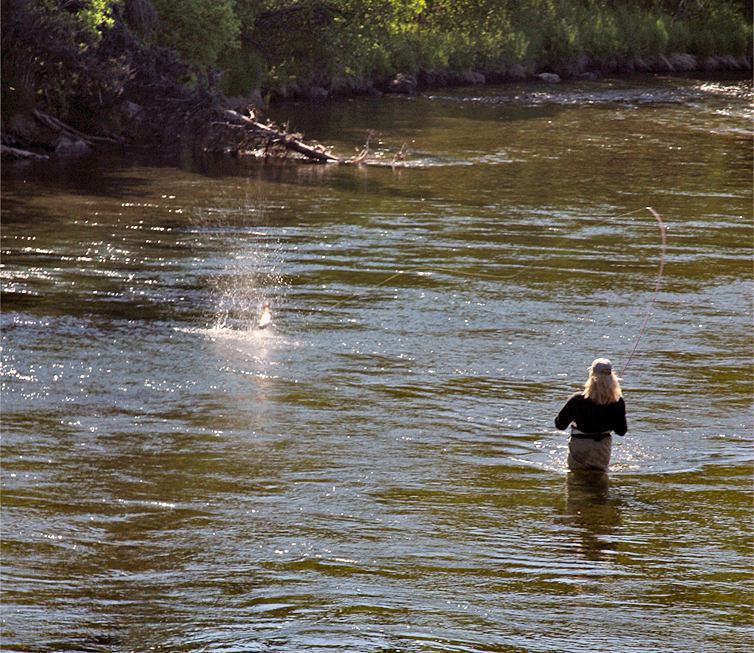 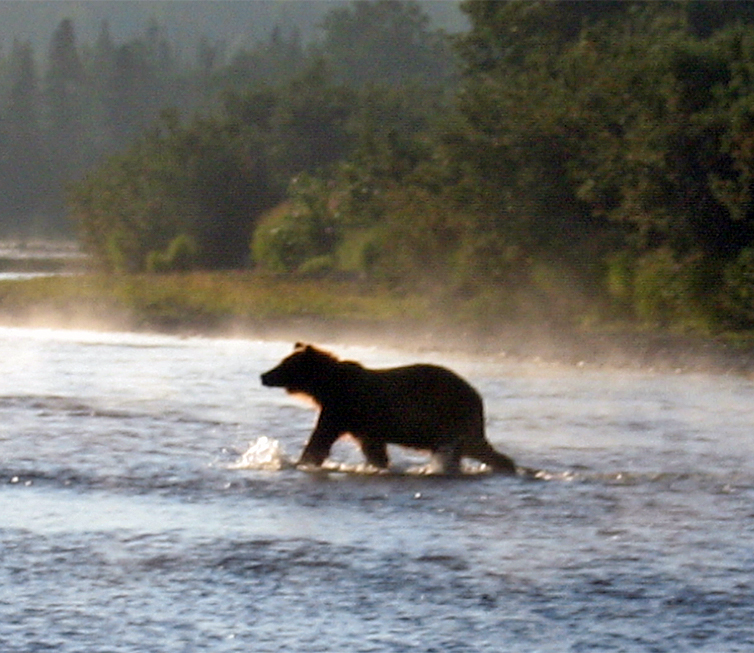 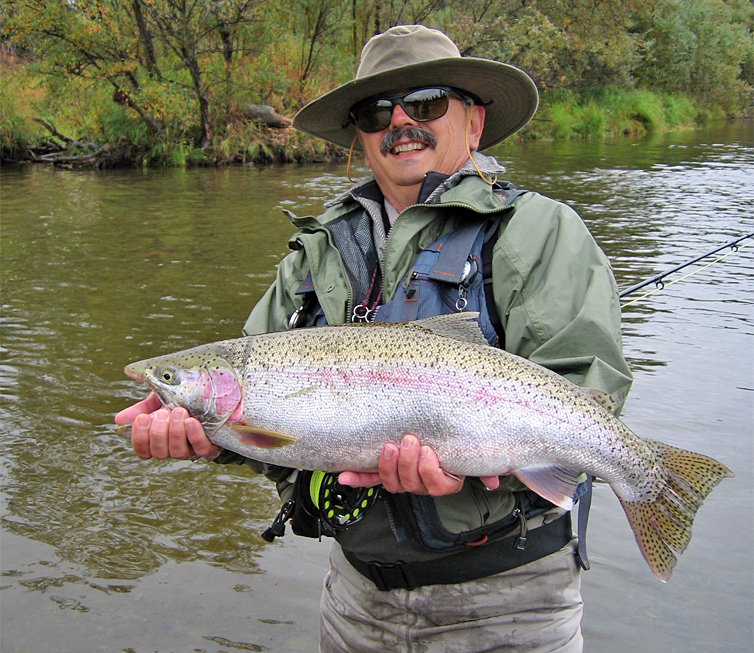 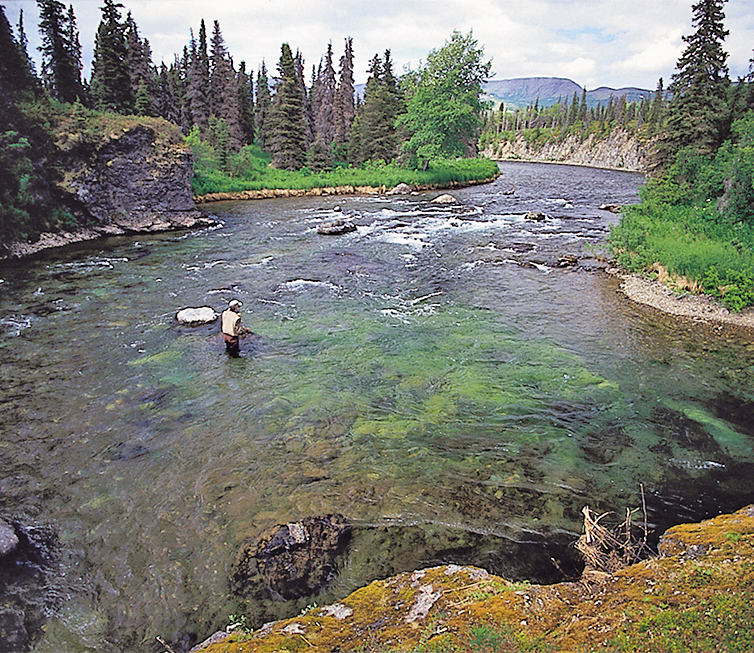 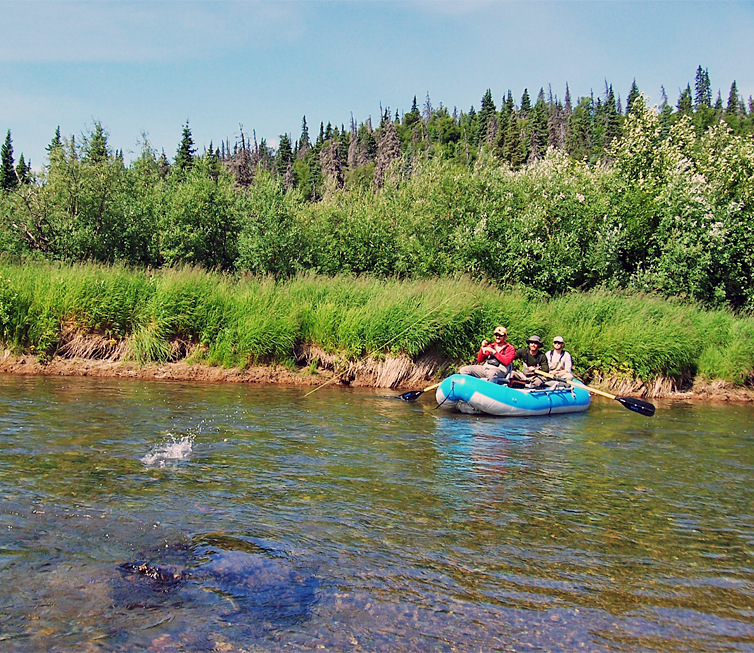 Included in your angling package at the Copper River Lodge is six nights/six days guided fishing (2-to-1 guest to guide ratio), room and board, float plane transportation between Iliamna and the lodge, flies, and local and state taxes.

Not included in your angling package at Copper River Lodge are flights to and from Alaska, roundtrip airfare to and from the village of Iliamna, fishing license, gratuities, alcohol, fishing gear, or items of a personal nature.