Deneki Outdoors owns and operates this destination on the banks of the Kanektok River, and has spared no expense to make it one of the most nicely appointed camps in Alaska.

Real beds and linens, oil heaters, full-on, separate hot water shower rooms, drying tent; all features one would expect in a standard lodge, but which are considered unheard of luxuries in a rustic wilderness camp environment. As well, Deneki hires the best guiding talent they can can find, many of whom are full time guides before and after the short Alaska season (and many of whom return to guide at Alaska West, season after season). This is a great adventure for the angler looking for angling diversity (the river gets all 5 species of salmon, as well as resident populations of rainbow trout, sea run dolly varden and Arctic grayling), wild country, and a well-run and organized camp, all at a reasonable rate. 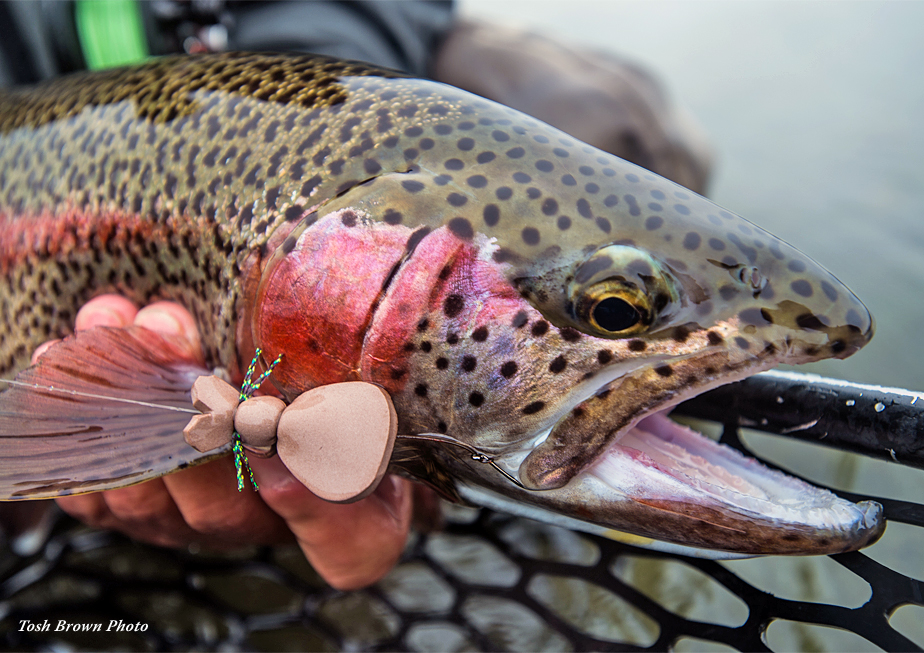 Included in your angling package at the Alaska West is transportation to and from camp from Quinhagak, meals, sodas, lodging, loaner gear, leaders and flies, and guiding services on the river.

Not included in your angling package at Alaska West are roundtrip transportation from Anchorage to Quinhagak (though the Camp has pre-arranged flights – between Anchorage and Quinhagak – at the estimated rate of $900), fishing licenses, any favorite alcoholic beverages, and gratuities.

The Fly Shop® is not in the insurance business, but we recommend Travel Guard (AIG) and Global Rescue (IMG) coverage as a service with a desire to see your best interests protected. It is impossible to know when an unfortunate situation (loss of luggage, fly rods, illness in the family, or an accident) may occur. However, such things can and do happen, and this insurance can provide a means of recourse against non-refundable financial losses. 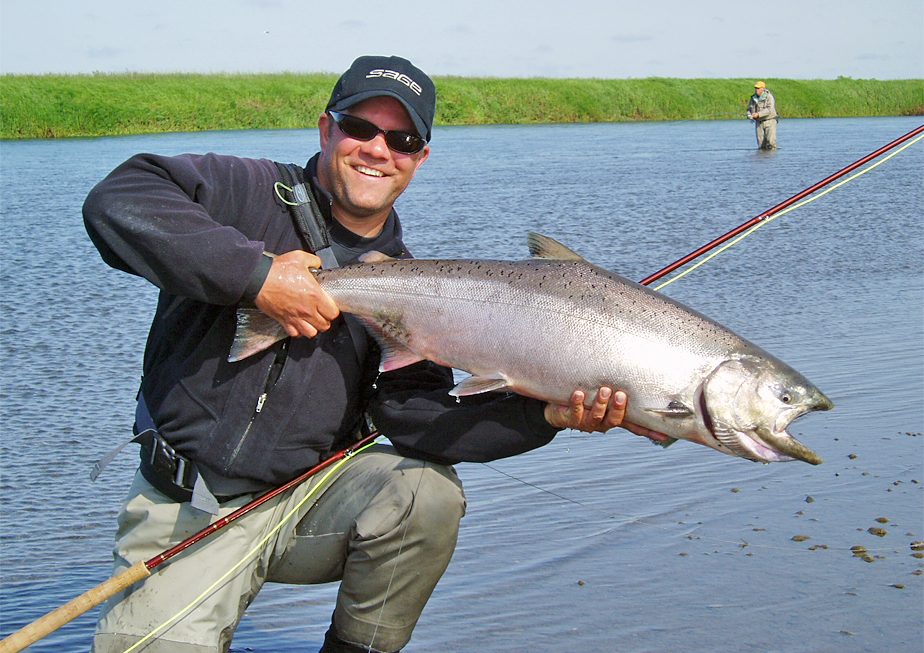 So often one has to choose a lodge located near trout water, then fly to the coast to catch fresh salmon… making this river a rare exception.

June - July:
The King salmon run heats up on the Kanektok in June, and lasts well into July. The lower river is fairly wide – spey rods are recommended - and comprised of a series of long, deep beautiful runs, perfect for swing fishing to these brutes. An average kings here will be 20-25 pounds, with fish over 40 an everyday possibility. As well, the river's sockeye and chum salmon salmon runs overlap the kings, and offer good sport for those looking for a bit smaller game – sockeyes average 6-8 pounds, and the chums 8-12 pounds. This same early season stretch will also see the river's big leopard rainbows aggressively chasing large streamers – trout in the 2-4 pound range are common, and even larger fish are routinely hooked. Look for the annual upstream migration of sea run dollies to begin in this same time period, making this is a great mixed bag time of year.

July - August:
As July segues into August, two major events occur. First, hordes of chrome silver silver salmon invade the river, their sheer numbers inundating every slow pool and calm backwater in the river. These aggressive-to-the-fly battlers are a flyrodder's dream, averaging 6-12 pounds, and willing to take surface poppers as well as streamers. Secondly, as all of the earlier-run salmon are now laying eggs, or dying and decomposing, the river's trout populations are taking up sharply defined feeding positions; anglers can either catch big numbers of good-sized rainbows (and dollies) in shallow spawning redds behind procreating salmon, or plop heavy flesh patterns against the banks behind drowned alders in search of fewer, but larger specimens. This will remain the drill into September, when the camps close down.

Getting to Alaska West

For the next week you'll be fishing in one of the most beautiful and pristine regions of Alaska.

Flight Schedule:
These flights leave Anchorage at 8:00 am on Sunday – see below for the check-in procedure. The return flight from Quinhagak to Anchorage is scheduled to arrive in Anchorage at 12:30 pm on Sunday, weather permitting. Guests leaving Alaska West on this charter should schedule their connecting flights to leave Anchorage any time after 7:00 pm.

Check-in Procedure:
Guests headed to Alaska West must check in at the Trans Northern ticket counter on the 2nd (Baggage Claim) level of the South Terminal no later than 7:00 am. Trans Northern gate agents will have a manifest for the Alaska West charter flight. Bags will be checked at this (L2) counter – we request that travelers arrive with no more than 60 pounds of baggage for the flight to camp.

Quinhagak to Alaska West:
When you arrive in Quinhagak, you will be met on the airstrip by representatives from Alaska West. You will board a jet boat for the 30-minute ride upriver to the camp. Be sure to pack your raingear in an accessible spot – if it's raining you'll want it for the ride upriver. Guests will typically arrive at Alaska West in the late morning on Sunday. This does not allow time for fishing on your arrival day, but it provides a great opportunity to unpack, relax, get your gear rigged and enjoy an extended happy hour. Please remember that travel in bush Alaska requires flexibility and that a variety of factors, including weather, may impact your travel and therefore your arrival time. 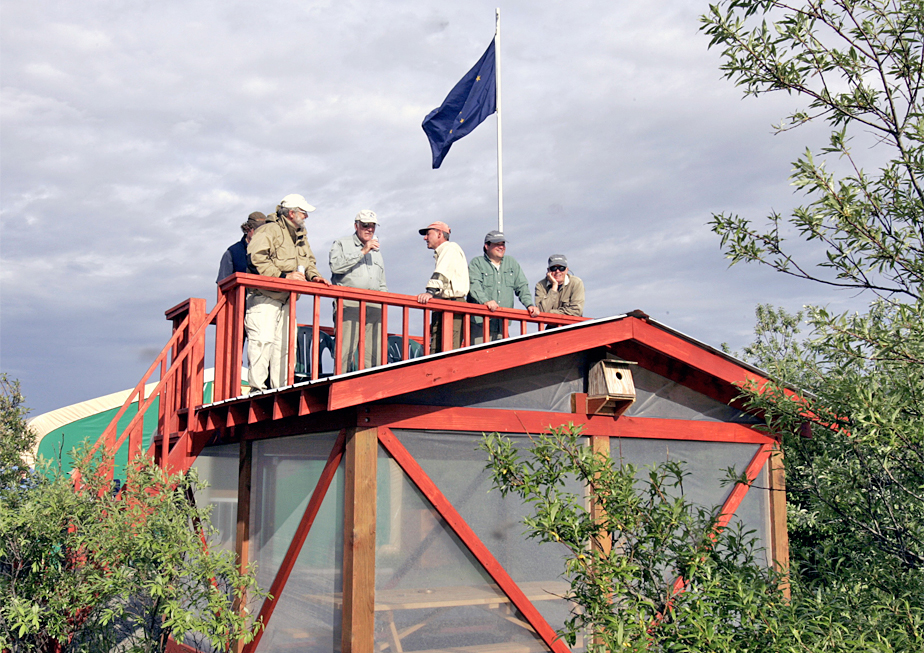 At the conclusion of every fish-filled day, guests can relax in the camp's game room and/or take advantage of the raised deck above it to take in the amazing view of the river valley.

This camp is a short, 30-minute run upstream from the little Native village of Quinhagak, and concentrates on the lower 15 miles of river. While the salmon fishing is wonderful at this Camp due to its proximity to the ocean, there is also more than enough rainbow and dolly varden fishing

to keep even the most enthusiastic trout angler happy. The camp features comfortable Weatherport tents built onto solid wood, raised platforms, both guest quarters and a separate tent in which to take your meals. Unusual for such camps, Alaska West has real beds (with real linens) in each tent, and they have also erected very nice shower/toilet buildings, allowing for long, hot showers, and vanity sinks with hot and cold running water. Typical of most such camps, breakfasts and dinners are taken in camp, while lunches are typically served streamside. 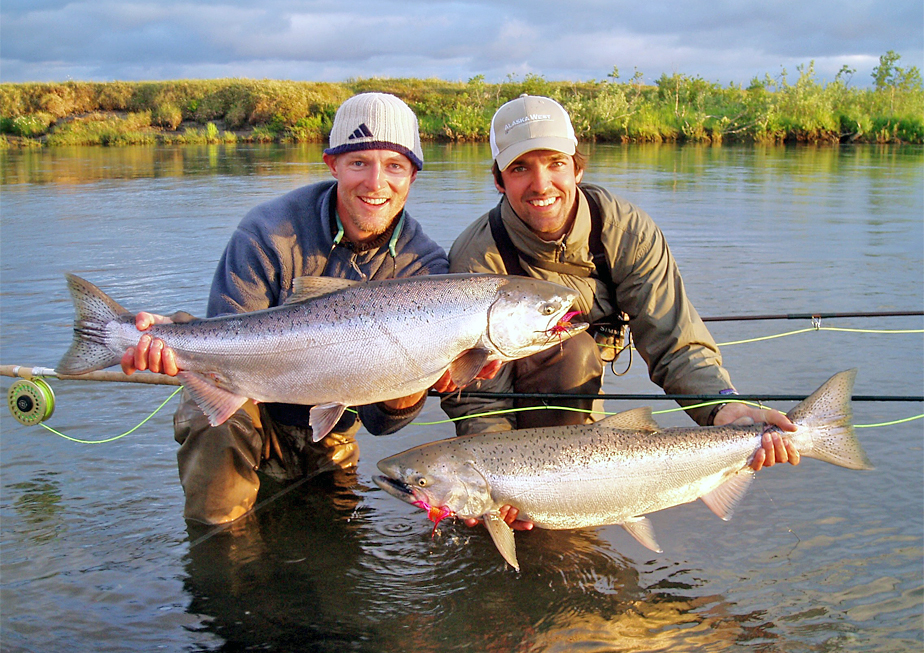 The former is especially useful when targeting big rainbows in deep water, the latter when salmon fishing or fishing for trout behind spawning salmon. Right after breakfast each day guests will be split up, two to a

boat and guide, and whisked off to the type of fishing they have requested. Due to the prolific and varied nature of the fishery it is not unusual to be catching bright salmon all morning, then spend the afternoon catching trout, dollies and . On the Kanektok, guides can custom-tailor the day to your wishes – hunt for fewer and larger rainbows, or smaller and more numerous specimens; swing 10-weights and sinking lines in June for monster King salmon, or pop Pink Pollywogs across the surface for silvers in August. The guide will work with each angler, sharpening their skills and explaining the fishing, and will stay with them all day.

• Centrally located camp, with short boat rides to great fishing for leopard rainbows, Dolly Varden, Arctic Grayling, and all five species of ocean-bright Pacific salmon. It is extremely difficult to find a river-based operation in Alaska that has both big rainbows and bright salmon in world-class numbers. Alaska West can deliver everything a serious Alaska fly fisher is looking for, in a remote setting, without breaking the bank on a fly-out lodge. This is a great value!

• Comfortable tent camp, with heated Weatherport Tents, drying tent for waders and clothes, sinks/vanities with hot and cold running water, and hot showers. As comfortable as tent camping can be! This is a tent camp designed and operated to take advantage of the world-class fishing a stone’s throw from the compound. If you are looking for a Hilton in the woods, this not the place. If you are looking for a hardcore fishing trip where you can fish until you drop, then Alaska West is the right outfitter for you.

• Alaska West employs a pool of hardcore fly fishing professionals that love the Alaskan summer, the bounty of the Kanektok, the opportunity to spend quality time with guests, and the chance to work in the bush. They are experts with years of experience and willing to share their knowledge of fishing and Alaska with you. You will leave Alaska West wiser, a better angler, with a whole new set of friends and memories that will last forever.

• An experienced, behind-the-scenes management team, who have been operating successful wilderness fishing camps and lodges in Alaska for decades. Their years of experience mean a seamless experience for you. The staff and management will take care of the details and mechanics allowing you to concentrate on fishing and enjoying the wilds of Alaska. Put that experience to work for you. 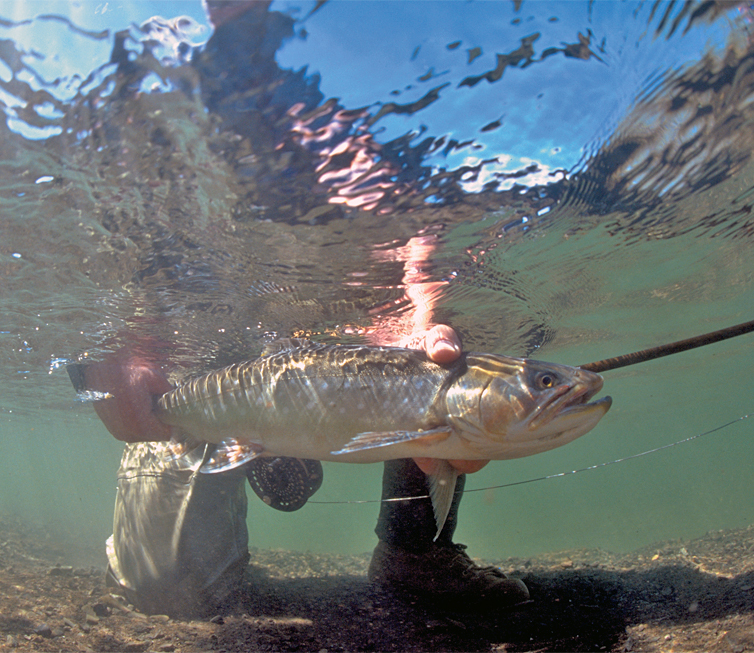 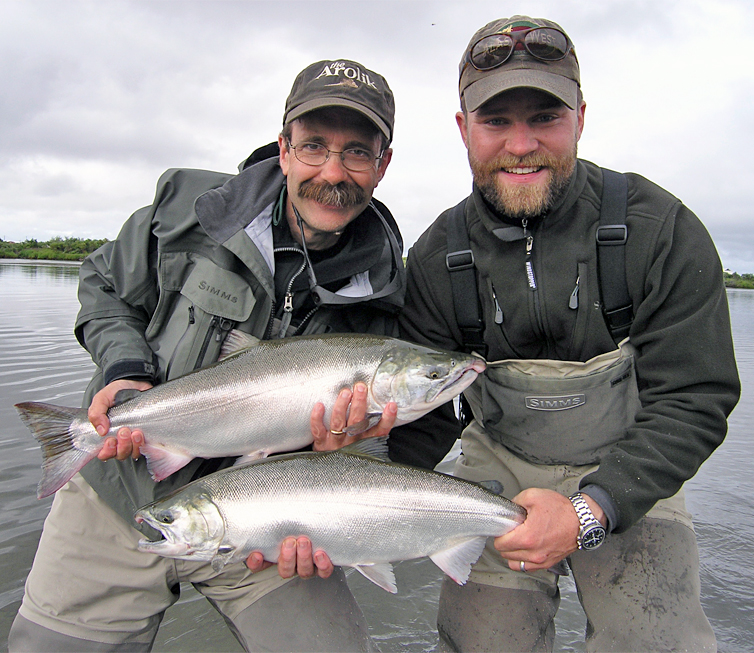 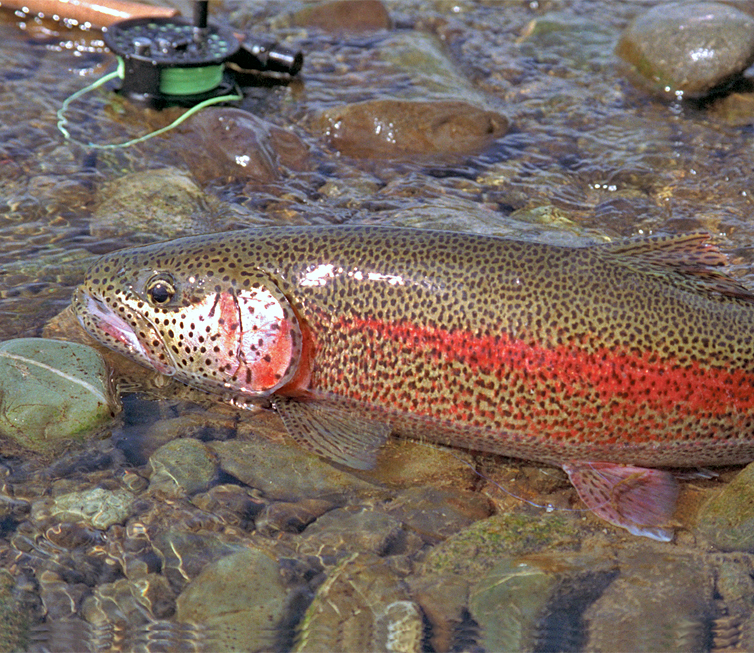 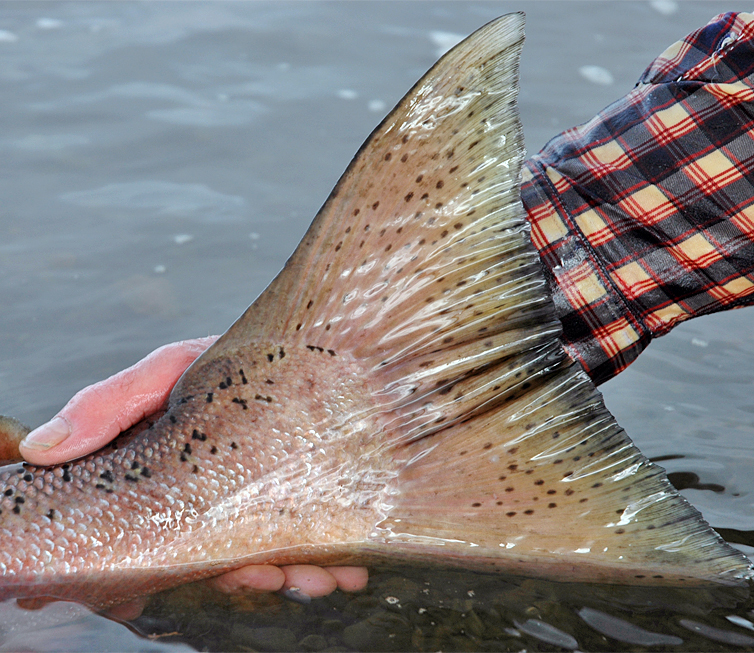 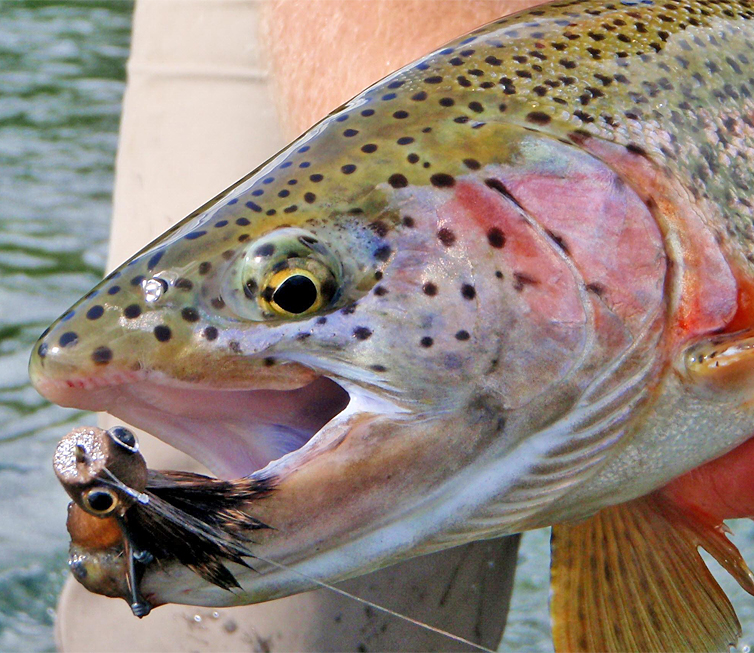 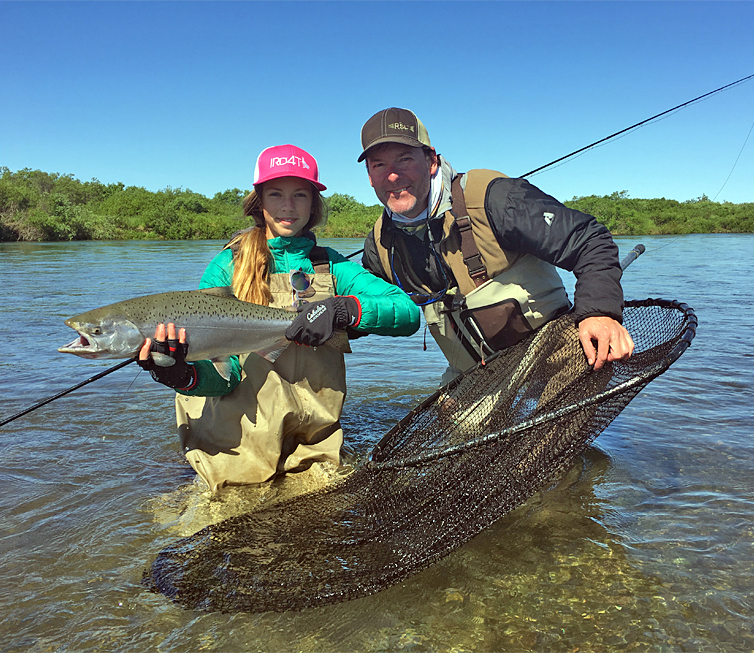 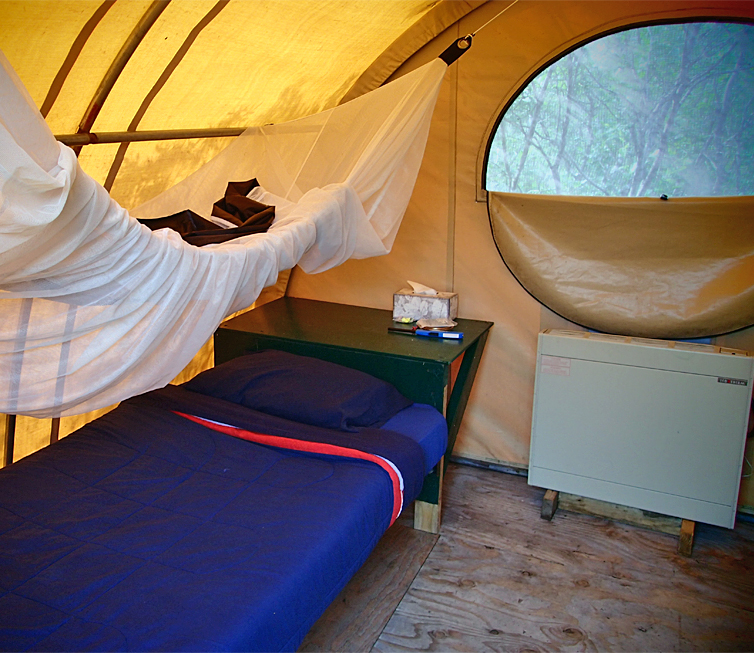 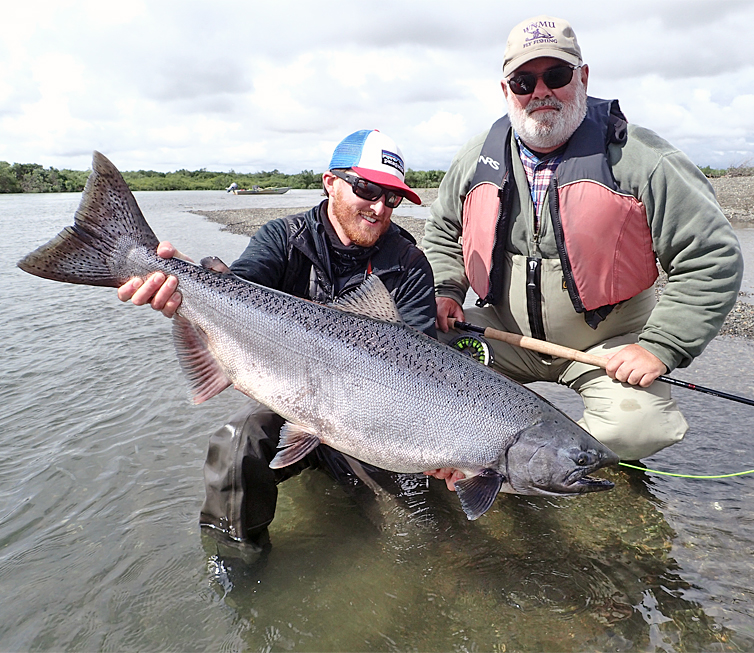 Included in your angling package at the Alaska West is transportation to and from camp from Quinhagak, meals, sodas, lodging, loaner gear, leaders and flies, and guiding services on the river.

Not included in your angling package at Alaska West are roundtrip transportation from Anchorage to Quinhagak (though the Camp has pre-arranged flights – between Anchorage and Quinhagak – at the estimated rate of $900), fishing licenses, any favorite alcoholic beverages, and gratuities.